It’s no secret that the MXGP riders have gotten extremely fast in the recent years, but it’s also no secret that (most) top MXGP racers have the desire to travel to the US to test their skills in AMA Supercross and the Nationals. Tony retired from MXGP racing in 2021, but he’s not quite done yet. At 36-years-old, Tony is set to make his AMA Pro Motocross debut this summer in California at the Fox Raceway (Pala) National and the iconic Hangtown National. And if Tony does well at the opening Rounds, we expect him to continue racing the 12-Round series.

We’ve also heard more rumblings than just this, there has also been lots of talk about MXGP star Jeffrey Herlings coming to race the full AMA National circuit as well now that his 2022 MXGP title defense hopes are ruined (after missing the beginning of the season due to injury). Click here to watch our recent video talking about Jeffrey.

Additionally, Cooper Webb might be missing from the starting line at the AMA Nationals this season to fix a lingering back injury (that began way back in 2019) which continues to bother him.

The Italian will fulfil a small ‘bucket list’ wish by turning his attention to the high-profile American national series and is initially set for appearances at the Fox Raceway National at Pala and the Hangtown Motocross Classic in Sacramento on May 28th and June 4th respectively. The 36-year-old stepped away from full time Grand Prix racing at the end of 2021 after a glittering career in which he became the second most successful athlete in the history of the sport.

Cairoli will feel the heat of competition again with his #222 KTM 450 SX-F; he used a previous edition of the motorcycle to claim the 2017 MXGP World Championship. He also accumulated six titles with the KTM 350 SX-F and earned the remarkable distinction of winning at least one Grand Prix every season during an era-defining 18 years at the highest level of MXGP and MX2. Even at 36 years old, Tony is a fierce competitor and we don’t expect him to be on a “joy ride” when he comes to the states. Certainly, he’ll be looking to win races.
Tony Cairoli: “It’s exciting to finally confirm that I will be racing in the U.S. To ride and race in America is something I always wanted to try. I like the look of the tracks. For me there is no pressure to perform and I’m not going there with the same preparation as I would have had for a world championship but I’m taking it seriously and would be looking for good results. I know this will generate some interest and it will be great to travel, see some friends and enjoy my time.”
Pit Beirer, KTM Motorsport Director: “It’s a big pleasure for us to finally reach the stage where Tony is able to race again and to attempt one of his ambitions. Our Red Bull KTM structure means we can be fully ready for him in the U.S. and can give him all our support. Tony is an icon and still an important part of our racing program and it feels like this is the least we can do to pay back all the wins, the titles and the stories he has made with us for over ten years. I think it will also be cool for the American motocross fans to see some of the special talent that made Tony one of the best riders in world championship history.” 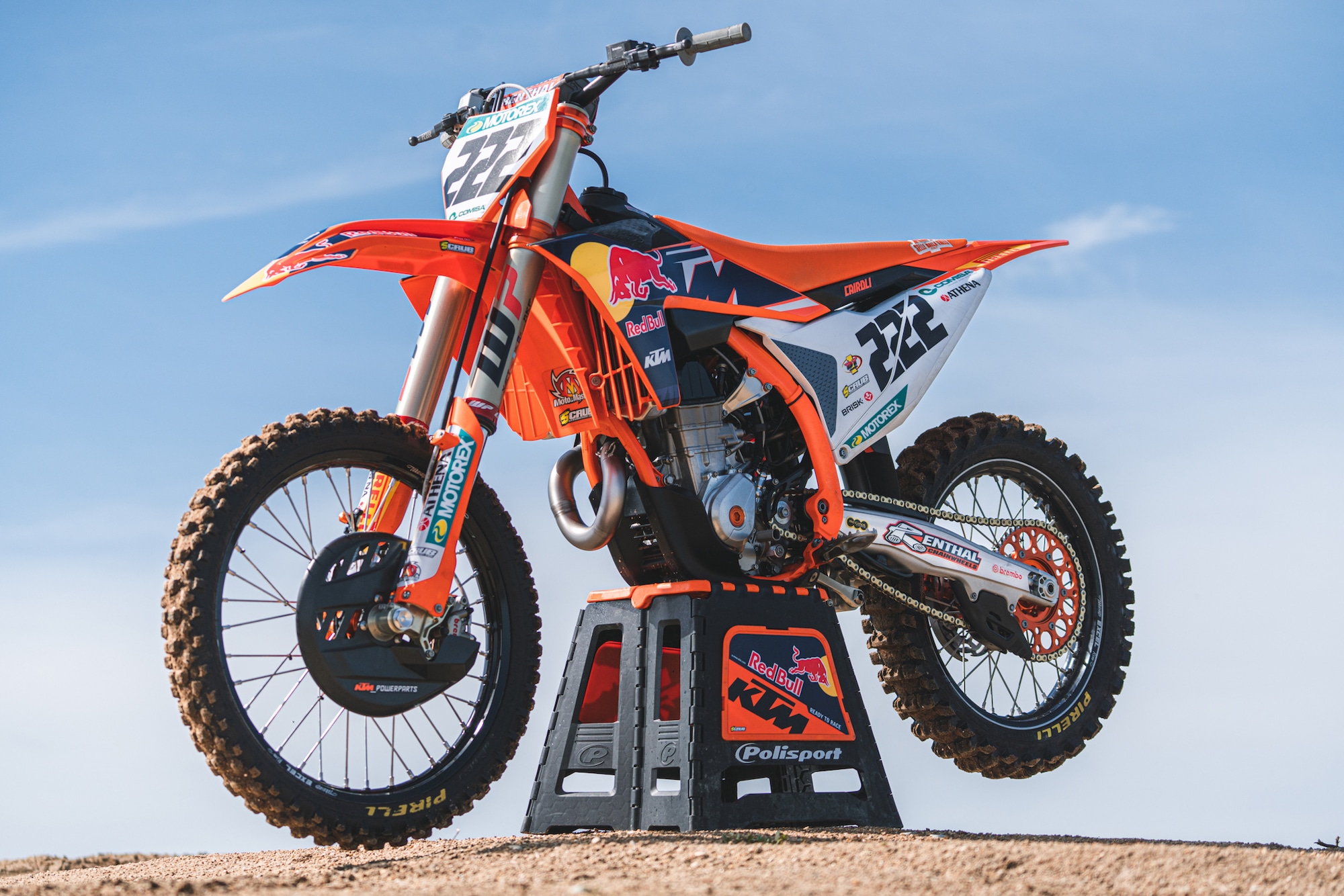 Tony Cairoli will ride aboard the new 2022-1/2 KTM 450SXF Factory Edition.
Ian Harrison, North America Red Bull KTM Team Manager: “We couldn’t be prouder of having a rider and a person like Tony in our awning. He’s a true legend of the sport and one of the best riders of the modern era. His achievements are matched only by the impact he has had around the world. We know he’s been preparing to race out here, and we’ve also been readying everything to give him the best amount of support. As we saw right up until the end of 2021 MXGP he is still extremely competitive, so I think that will be exciting for the fans in the U.S. to watch him in action.”