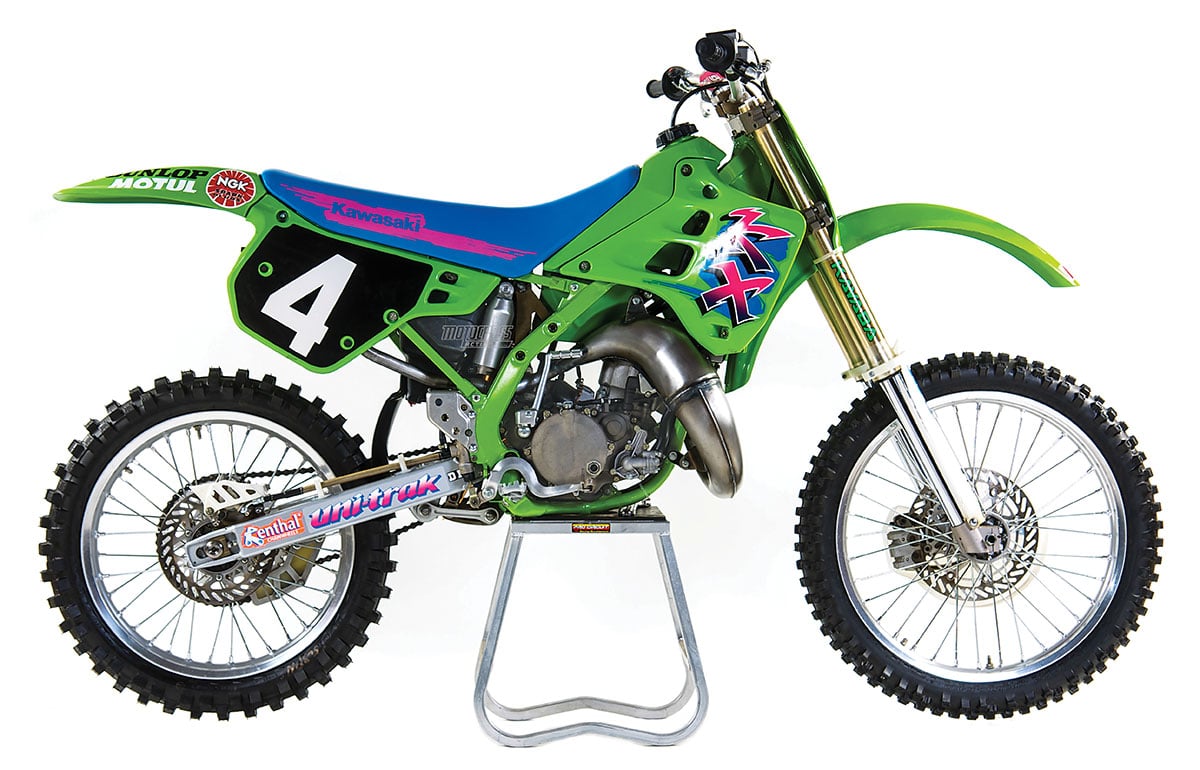 Coming into the 1991 AMA 125 National Championship, Kawasaki hadn’t won the series since 1984 (when Jeff Ward took the 125 title). Kawasaki was looking for a rider who could win the tiddler class, and Mike Kiedrowski was looking for revenge after being dropped by the Honda factory team at the end of the 1990 season. Kiedrowski had won the 1989 125 National Championship for Honda and had finished just one point behind Suzuki’s Guy Cooper in the 1990 Championships.

“Kawasaki hired me with the promise and understanding that I would win the championship for them,” said Mike. “I felt a lot of pressure, but they gave me 100 percent backing and built the bike exactly the way I wanted it.” Kiedrowski’s mechanic was Shane Nalley, with Rick Asch doing the suspension and Jim Felt building the engines. The “MX Kied” didn’t have the fastest bike on the track. In fact, Mitch Payton called it a “slug,” but it suited Mike perfectly, and Kawasaki modified the production-based machine extensively. Some of the engine modifications included stuffing the crank to increase crankcase pressure and filling the transfer ports with epoxy so they could be completely reshaped. Engine weight was shaved by using magnesium primary and ignition covers and milling material off the clutch and transmission components. The suspension was “works Kayaba” and fine-tuned by Asch with an emphasis on the high-speed compression control that Kiedrowski demanded.

As the 1991 season neared its conclusion, Kiedrowski would go on to win the championship over Guy Cooper by 16 points, even though Cooper won the five 125 Nationals to Kiedrowski’s four (Red Bud, Axton, Southwick and Millville). Mike raced the same bike to victory at the 1991 Motocross des Nations. Works bikes are almost unobtainable because the factories usually destroy them. Development costs, even on production-based machines, can easily run into six figures. The value of this machine is estimated at $50,000. Kawasaki gave Mike Kiedrowski his title-winning bike as a reward for a job well done. It sat in Mike’s living room until Mike’s wife Kim remodeled the house and relegated the KX125 to the garage. From a distance, the Kiedrowski works 125 looks quite similar to a stocker, but look close and you will see a magnesium upper shock mount, mag triple clamps, mag outer cases, factory hand-built pipe and Kayaba works suspension. There is even a welded brace on the throttle-cable exit.

TEN THINGS YOU NEED TO KNOW ABOUT ENGINE COOLING