Sean Collier came from way back in the first 450 Pro moto, but had an easier time of it in the second moto on his KTM 450SXF. Photo: Mark Chilson

As the 2017 Dubya World Vet Motocross Championship gets closer—and it is only one month away—more riders begin to ramp up their racing programs. REM is probably the best place to get ready for the World Vet Championship for two reason: (1) There are more top ten World Vet guys racing at REM every week than at any other track in the world. In fact, there are 14 REM regulars who were in the top ten of the Over-30, Over-40, Over-50, Over-60 and Over-70 Expert classes at last year’s World Vet. (2) On October 28, exactly one week before the World Vet starts, REM holds its annual Octobercross event (formerly called the Commotion by the Ocean when REM raced at Carlsbad Raceway). Why does that matter? Because they will be the test race for the always re-designed World Vet track layout. And because of scheduling of the 24 Hours of Glen Helen cross-country race, REM will not be racing on October 14  or 21. This next week’s race, October 7, and the October 28 race become the only prep races on the schedule. Last week Dennis Stapleton raced four different 450s in four different moto. This week he only had to race the 2018 KTM 450SXF (although he did do a moto on the 2018 TM MX450FI in preparation for an upcoming test). Photo: Dan Alamangos 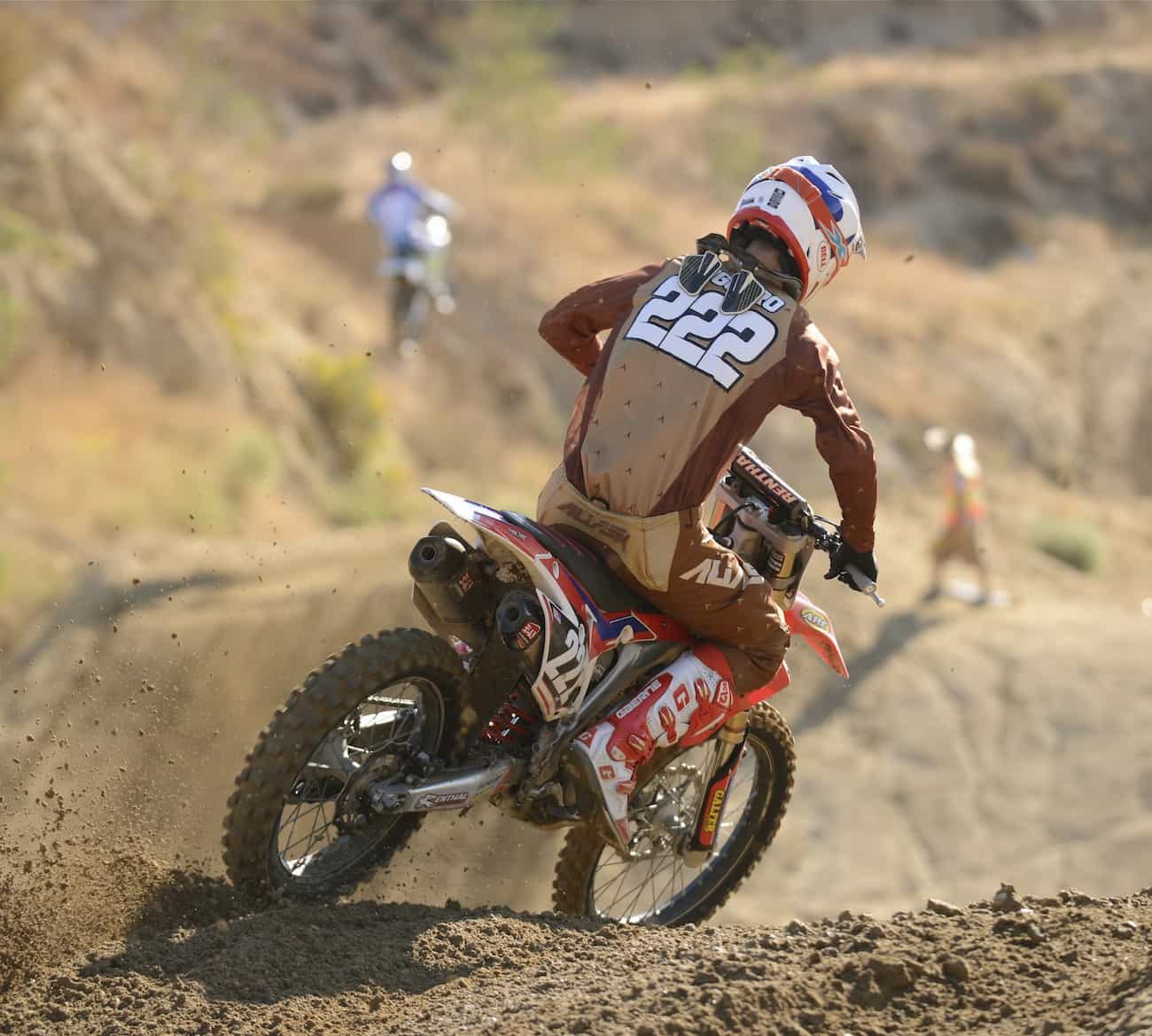 Former AMA Rookie of the Year Kevin Foley (83) came to REM to get ready for the World Vet Championship in a month. He has some work to do as two top ten World Vet racers from last year’s Over-50 Expert class ended the day in front of him. Here, Kevin flies by Marc Crosby (44). Photo: Jody Weisel David Cincotta was enlisted to race MXA’s 2018 Honda CRF450. Note that it has an FMF single-sided exhaust on it. In the first Over-40 Expert moto David was second, but a flat front tire in moto two forced him to slow down to a 5th for third overall. Photo: Mark Chilson Thad Friday (10) was second in the Over-60 Experts, while Pete Vetrano (37) raced an SWM to sixth. Pete is the former TM, LEM and Vertematti distributor to the USA, but now he’s the SWM importer. Photo: Jody Weisel 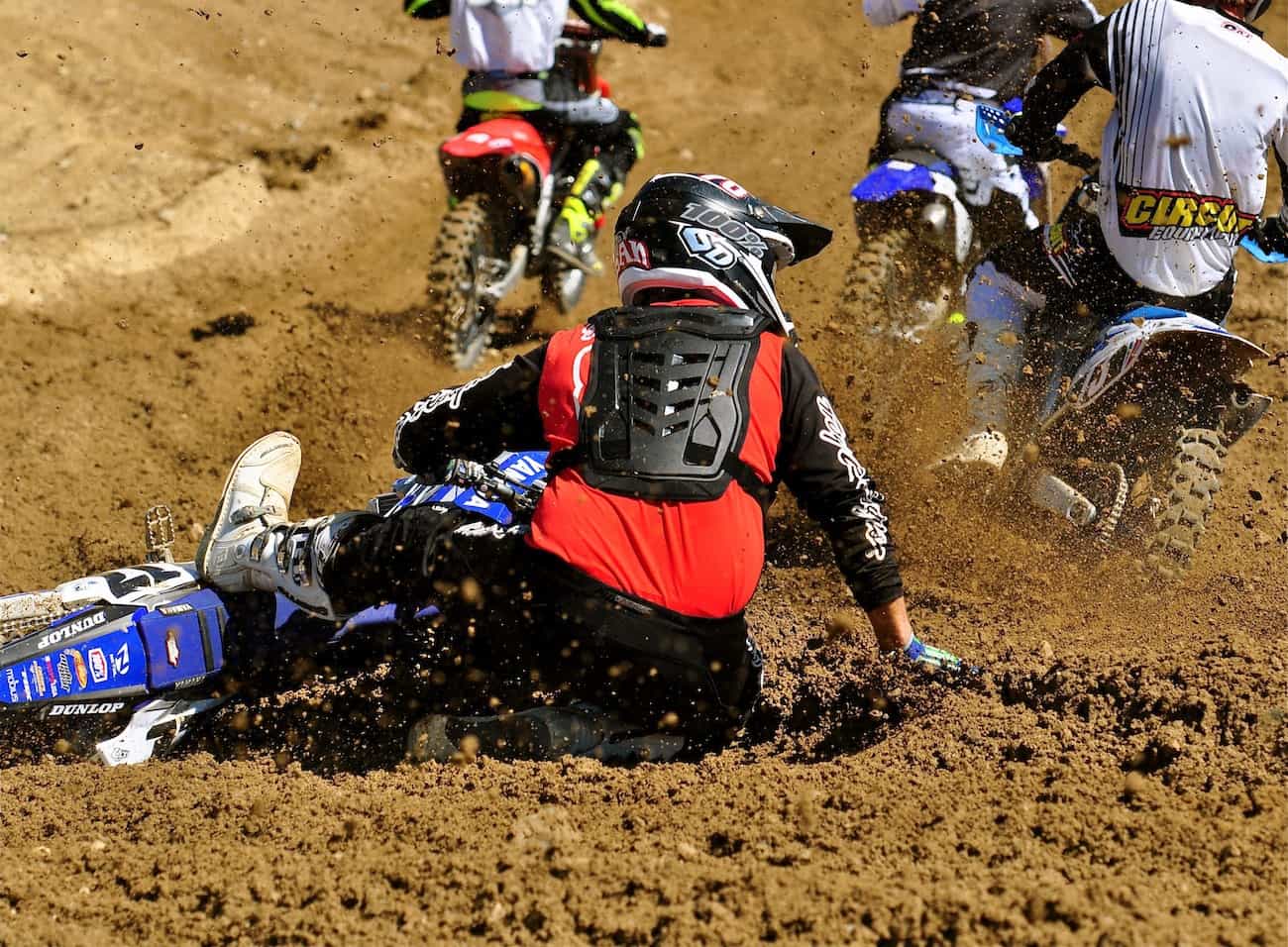 Even the talented guys fall down. South African Alan Jullien calmly checks traffic in the Over-40 Experts. Unfortunately, a 7-1 day was only good for fourth overall. Photo: Mark Chilson Another Over-40 Expert had issues. TM importer Ralf Schmidt broke 16 spokes in the rear wheel of his TM two-stroke in moto one, but actually had enough spokes with him to fix it for moto two—where he came back to get a third. Photo: Dan Alamangos You really feel guilty when you don’t put in as much effort as your friend does rooting you on. Here, the injured Gary Scott (see the brace on his right ankle) cheers on Pete Vetrano. Pete was forced to pick up the pace. Photo: Dan Alamangos You want this guy’s job. Every week brings a new bike for MXA’s Jody Weisel. In the past 2-1/2 years Jody has raced over 100 races without missing a single one. This week he took a 2018 Husky FC350 to a 2-2 day in the Over-60 Intermediates. Photo: Dan Alamangos 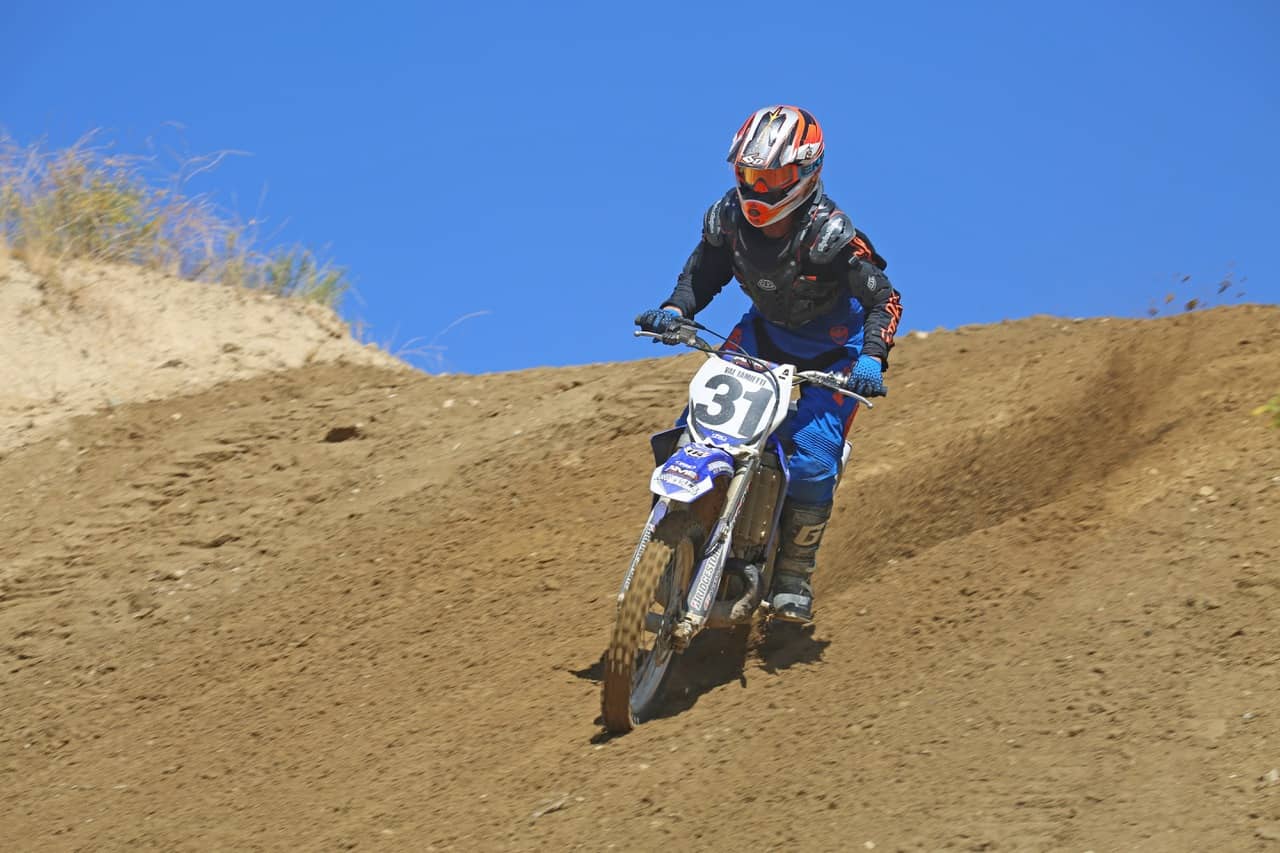 Val Tamietti kept his win streak alive for another week in the Over-60 Expert class. There is talk of a bounty of Val’s head for any 60-year-old who can beat the former CMC number one rider at REM. Photo: Rich Stuelke Josh Fout (68) won the first moto of the 450 Novice class, but got knocked down in the second moto and ended up with 1-2 day to Jeff Fitzgerald’s 2-1. Photo: Rich Stuelke Jon Ortner (1) leads Luther French through the sweeping turns in the back portion of the REM track. Ortner and French dueled in both motos, but for the second week in a row Ortner took the gold. Photo: Jody Weisel Sean Collier’s style is effortless—even when dropping off of a steep lip. Photo: Rich Stuelke Tom White was met by applause when he showed up to handle the riders meeting. Tom wanted to come to REM, even though he isn’t able to race, to show his friends that he supports them as much as they support him during his illness. Photo: Rich Stuelke Robert Pocius (153g) finished 7-7 in the Over-50 Intermediates—which was the biggest class of the day at Glen Helen. Photo: Jody Weisel Tom Holmes (510) leads Steve Chandler’s TM two-stroke. Chandler would win the Over-60 Intermediates with a 1-1, while Holmes took the win the Over-65 Experts. Photo: Rich Stuelke THE AFTERMATH: 2017 MXDN IN MATTERLEY BASIN