CRIME WATCH: JIMMY MAC GETS HIS STOLEN BIKE BACK This photo was shot the day before his bike was stolen in Tuba City, Arizona. This jimmy Mac and his DRZ-400S in Gooseneck State Park in Utah.

If you remember, earlier this week Jody’s long-time motorcycle industry friend Jimmy Mac had his dual-sport bike stolen while on tour of dirt roads, single track and off-road adventure in the four corners area. It happened when Jimmy and his riding partner Lance Sallis stopped for the night in Tuba City, Arizona, on their way to Page, Arizona (and the Northern Rim of the Grand Canyon). Jimmy reported the theft to the local Police, but they didn’t seem interested in helping, but lucky for Jimmy, a group of local good samaritans jumped in to help. One young man posted the news on a social media bulletin board and by luck a woman spotted the bike at a gas station later that day, although Jimmy’s 2019 Suzuki DR400S had been painted red. 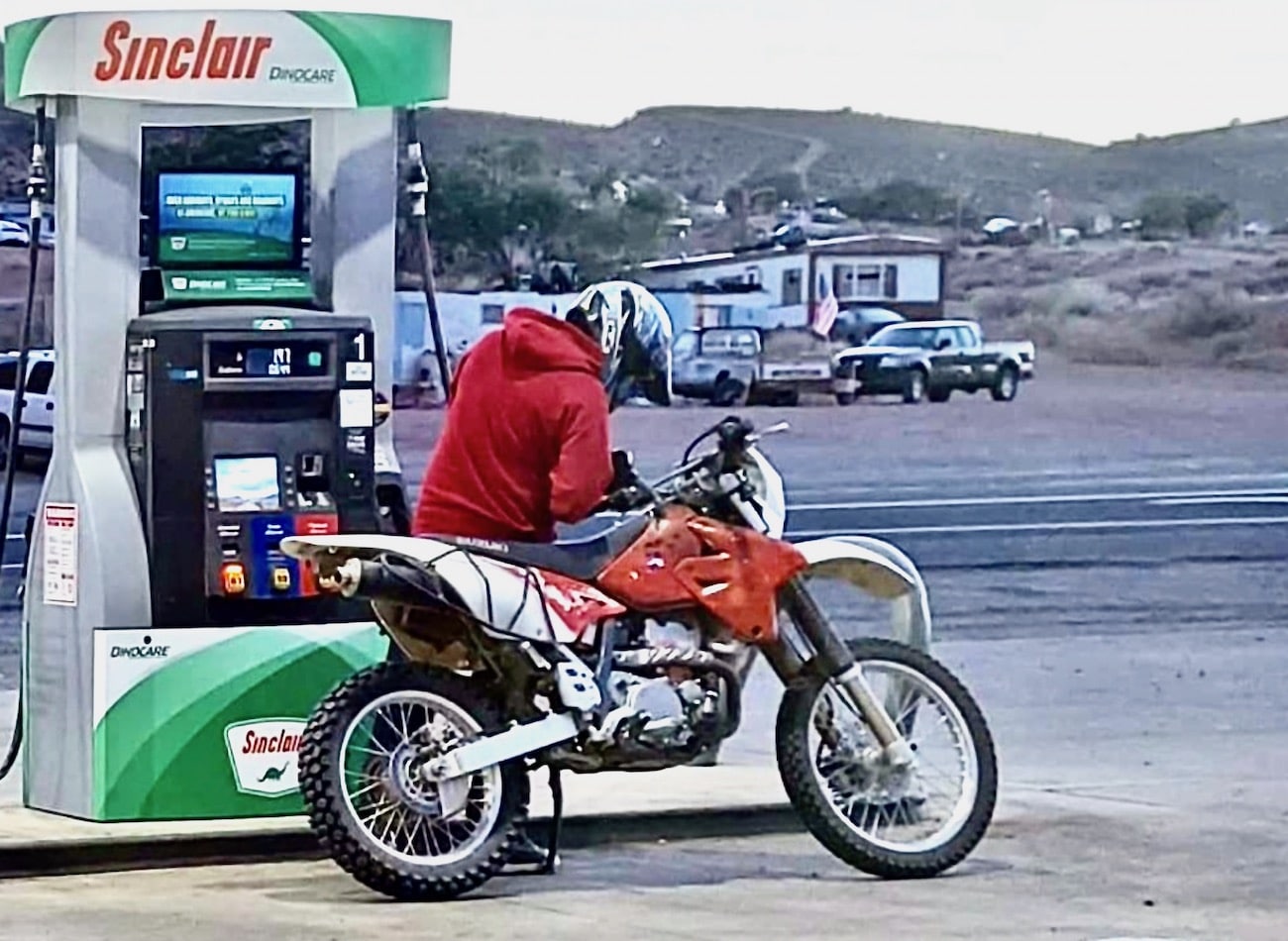 This is the thief with Jimmy’s bike at a gas station in Tuba City. The bike had been painted red, but a woman who had seen the bulletin post was suspicious and shot a photo of it.

Other residents spotted the bike at a house in a local neighborhood, although by now it had been repainted black. They called the police and insisted that something be done. In the end Jimmy got his bike back—thanks to the kind people of Tuba City. Jimmy sent this letter to Jody to thank MXA for posting the news and to those who reached out to help him. He included photos of the recovered bike. Realizing that his cover had been blown because of the gas station photo, the thief repainted the bike black and even took the time to paint the rims, brake pedal and cylinder red. This is what it looked like when it was recovered. Jimmy said the bike smelled like wet paint. The turn signals, mirrors, tail light and saddlebags had been removed.

“Hey Jody,
I got my bike back. It looks very rough but parts are so abundant I should be able to make it look acceptable without blowing too much dough. Lance Sallis has already tracked down a bunch of the parts that were stripped off or spray painted for me. Thanks for your posting. A lot of people reached out after seeing your post. “I don’t need a key anymore because he hot-wired it. Look at the overspray on the bar and clamps. He didn’t do a lot of masking. The guy even did some type of fish scale paint pattern on the gas tank. Even in a place as inhospitable as Tuba City, there are plenty of great folks. I would have never seen my bike again if it wasn’t for the efforts of an individual who did better police work than the police, and the citizens who did the right thing,” said Jimmy Mac. “My Tom White sticker made it though the theft and recovery. He was watching over my bike,” said Jimmy.

If you like to learn more about Jimmy, his adventures and life in the motorcycle industry, he has a entertaining website at www.jimmymacontwowheels.com

“WHY AM I COMPLAINING SO MUCH, I RIDE DIRT BIKES FOR A LIVING”—FAST FREDDIE

BEST OF JODY’S BOX: MY ROAD RACE GLORY DREAM WAS CRUSHED… OR SO I…