The Over-50 Experts use the Talladega banking and some of its skirt. That’s Kevin Foley (83) in the lead with Drey Dircks (64) second and Jon Ortner (10) third. And that’s how the fastest of the fifties finished. Terry Cook (303) and Maine’s Andy Mathieu (53) roost their own personal sections of this sandy berm. Mathieu would win the Vet Pro class and Cook was 5th in the Over-40 Pros. 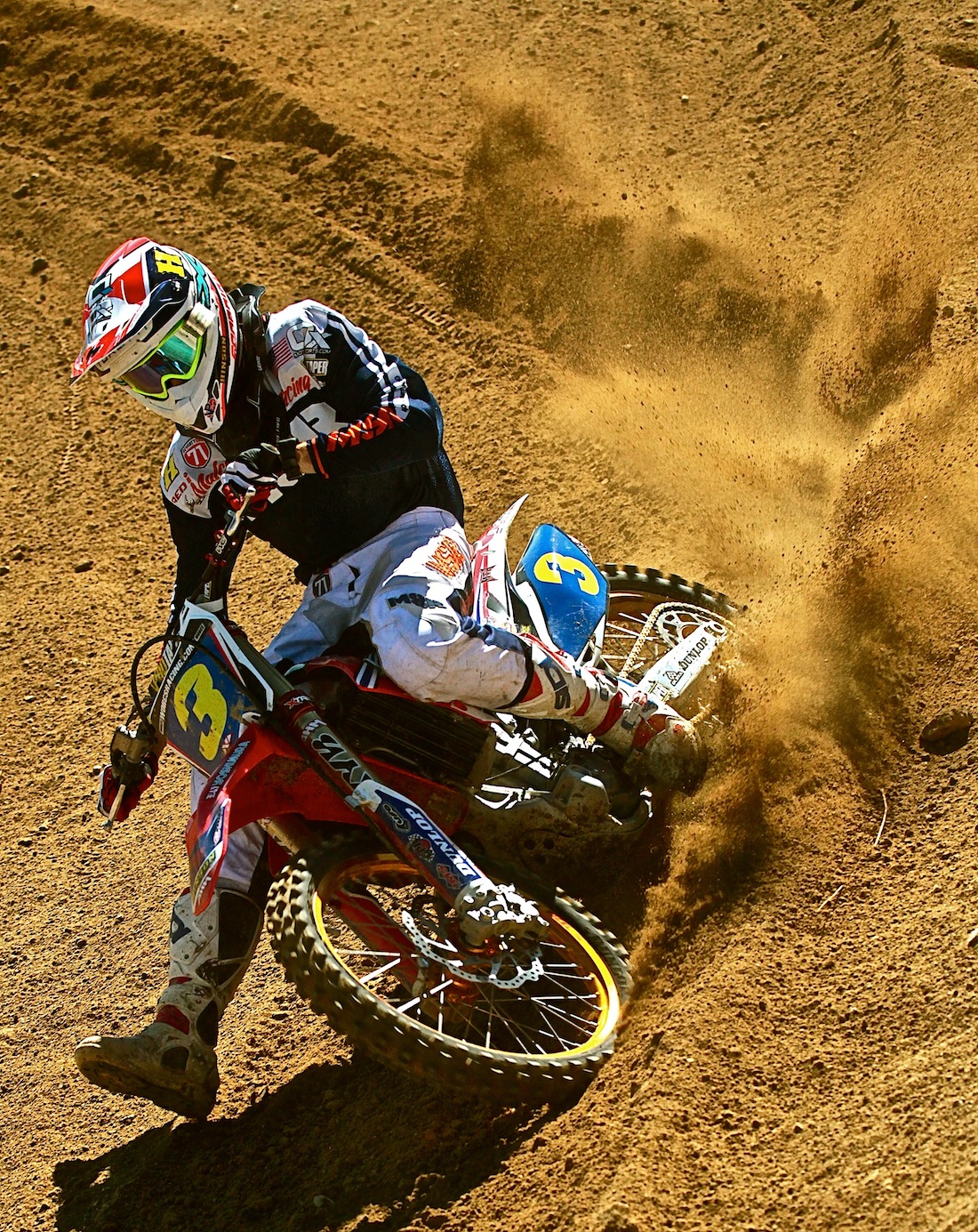 450 Pro Justin Jones in the same berm, but moving a lot more dirt. When is the last time you flew to Barcelona for a race? Spanish racer Joaquin Sunol made the trip in the opposite direction. He borrowed Jody’s 350SXF (with Showa works suspension) and John Basher’s helmet to get 4th in the Over-50 Intermediates and the Over-40 Novices. MXA’s Jody Weisel built a new track for the next week’s World Vet and used the Octobercross race to test the layout. Since he gave his trick 350SXF to his friend, he raced a stock 450SXF test bike. Glen Helen’s 20-story hills are massive for a 450, imagine how big they look to Nathan Abbott’s 65. It’s always nice to have someone you trust to give you track advice. The Coles, father and son, talk strategy. Gary Jones has won 8 World Vet titles, starting as far back as 1987, and he also has four 250 National Championships. Next Sunday they have a Vet Women’s Pro race — with former Women’s World Champion Steffi Laier on the line — but at the Octobercross Kitty Hoole (54) swept both women’s motos. Former Grand Prix star Kurt Nicoll has been prepping for the World Vet for the last couple weeks. He looks sharp. What are the odds that with 40 riders on the track that two of them would show up with the same number? Since scoring is by transponders the promoters don’t sweat it as much as they did in the past, but it is odde that the two 52s would circulate together. British rider Stephen Heighton went 3-4 in the Vet Pro class, but styled for a while. Brazilian rider Fabio Santos went 1-1 in the Over-50 Novice class. Cody Brownfield (124) exhibits the steely eyes needed to navigate your way through Glen Helen’s minefield of bumps and ruts. Cody went 1-2 in the 450 Intermediate class.