The winningest rider in World Vet history, Doug Dubach, lofts himself over the Log Cabin jump on his way to one more crown in the Over-50 Expert class. Looking a little like the afternoon drive on the 405 Freeway, there were some unexpected lane changes at Glen Helen. 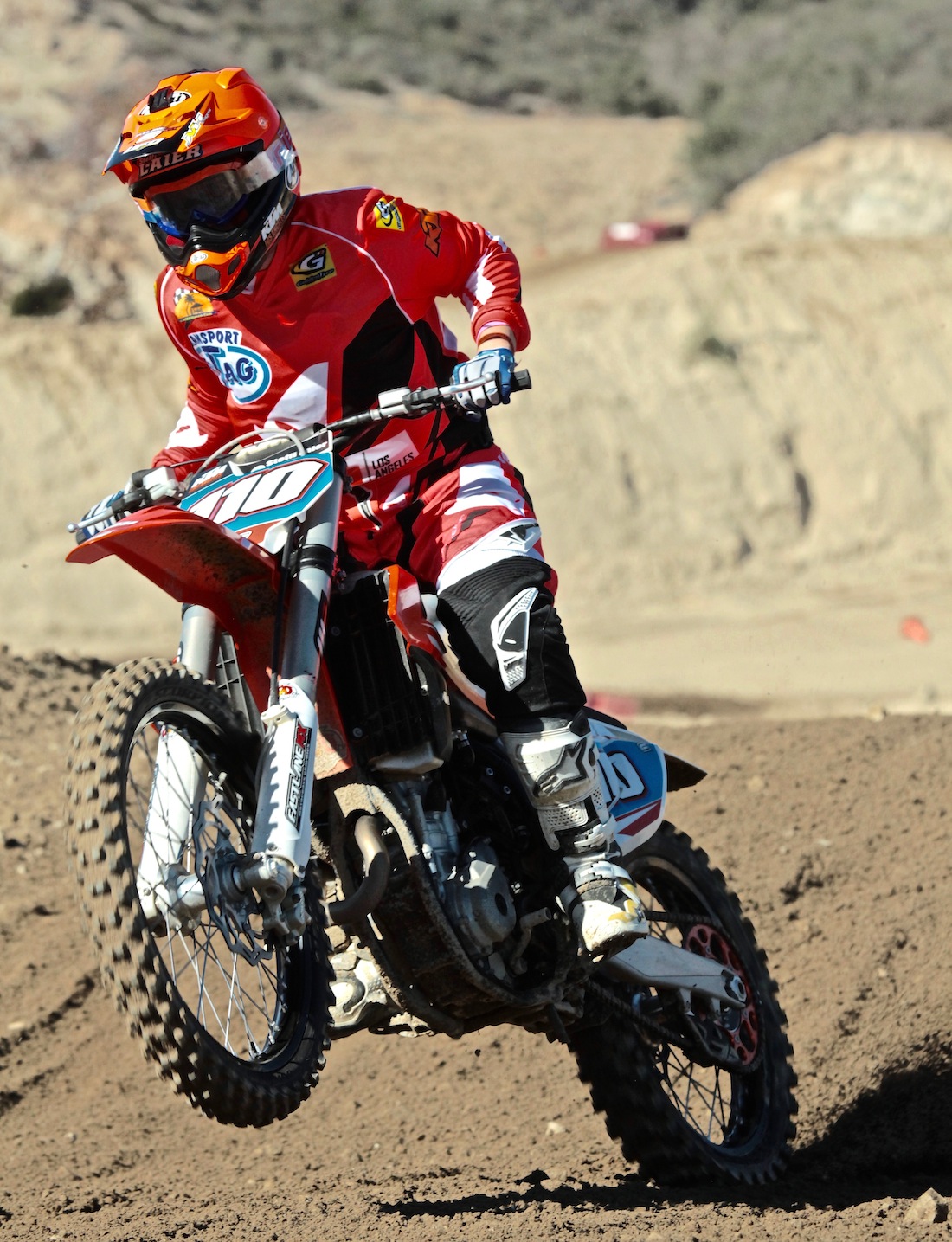 Steffi Laier came from Europe to race the first-ever Women’s Pro class at the World Vet. Ageless Gordon Ward just keeps on racing. Gordon was third in the Over-40 Pro class behind Kurt Nicoll and Doug Dubach. For those not from SoCal, Gordon is best known for inventing the heel clicker many decades ago. Barcelona’s Xavi Costa puts the power to the ground. Costa originally raced at Glen Helen at the 2010 United States Grand Prix and has come back every year since for the World Vet. Billy Jurevich (180) and Matt Karlsen (940) sweep into the banked Talledega turn on their way to top ten finishes in the Over-30 Pro class. Andy Mathieu came all the way from Maine to race the World Vet only to have his photo obliterated by a debris field of roost. Mathieu finished 6th in the Over-30 Pro class. Arizona’s Ed Foedish (64) applies maximum Body English in an attempt to alter his flight path to hit the landing ramp of the Log Cabin jump. Foedish was 4th overall in the Over-50 Pro class. Idaho’s Don Grahn has raced the World Vet Championship for years, but the best he could ever do was second place. No more! Grahn’s 2-1 in the Over-60 Expert class was good enough to beat Canadian hero Pete DeGraaf for the title. DeGraaf can’t be too upset. He already has three Over-50 World Championships and 9 more years to get an Over-60 title. Although his performances have suffered since almost winning the Over-40 Pro class back in 1988, Jody Weisel (192) has raced every World Vet Championship ever held. The 2015 Dubya-sponsored World Vet was his 31st consecutive event. Lars Larsson was once the only motocross racer in America. Back in the 1960s, Edison Dye hired the Swedish Grand Prix racer to move to America and demonstrate the new-fangled Husqvarna two-strokes by racing and winning every race he entered. Lars was the Johnny Appleseed of motocross. He’s still racing at 73 years old. Not only is Doug Dubach exploring the edges of the track in this photo, but it appears to be a lunar landscape. “You call that a holeshot? This is a holeshot.” Mike Segundo (80) in the Over-40 Intermediates. Every racetrack should have singing flaggers. Not because you can hear the strumming, but because it beats having them fall asleep.