The Dubya USA World Vet Championship celebrates its 35th year at Glen Helen Raceway on November 1-3, 2019. Founded by the late Tom White, who also sponsored it for the first 26 years this was the first race to honor Vet racers anywhere in the world. For 2019, Tom’s daughter Kristin, is sponsoring the World Vet  for the fifth year (Dubya has been the title sponsor since 2014). Josh Grant was untouchable in the Over-30 Pro class at the 2018 Dubya World Vet Motocross Championships.

Here is the schedule of events for the most important Vet race in the world—start making plans now.

Thursday will feature an open practice from 8:00 a.m. to 2:00 p.m. Additionally, registration for the Dubya World Vet Championship will open at 2:00 p.m. to 5:00 p.m. The Dubya World Vet Motocross Championships will boast a National-caliber track using all of the famous Glen Helen landmarks such as Talledega, Mount St. Helen, Bud’s Creek, Yamaha Hill and the Velodrome. Thursday is a chance for out-of-state and out-of-country riders to get adapted to the track—while riding with AMA National Pros and 16-year-old kids. It’s a wild day. 9:00 a.m. World Vet practice: Friday offers a special practice, limited to riders who have pre-entered into the 2019 Dubya World Vet Championship. This practice runs from 9:00 a.m. to 1:00 p.m. Also, On this day the vendors will be setting up shop.

1:00 p.m. World Vet sign-up: For riders who want to enter the World Vet early and avoid the race day crush, registration will be open from 1:00 p.m. to 5:00 p.m. at the Glen Helen National Tower. 11:00 a.m. Dubya World Vet Cup Moto 1: The first moto of the World Vet Cup of Nations will be held at 11:00 a.m. It is made up of three-man teams from around the global. Each nation is allowed to enter up to three teams, but each team must consist of an Over-30 Vet, Over-40 Vet and Over-50 Vet. The World Cup will run its first moto on Saturday and its second moto on Sunday at 1:00 p.m. The World Cup is holding one moto on Saturday and one on Sunday so that it will not interfere with riders preparation for their regular World Vet classes (if both World Cup motos were on the same day, it could result in schedule conflicts with the riders other races).

It should be noted that the Official “World Vet Championship classes” on Saturday are for the Over-40  and Over-50 Pros — for everyone else it is a chance to work out the kinks before the big day on Sunday. 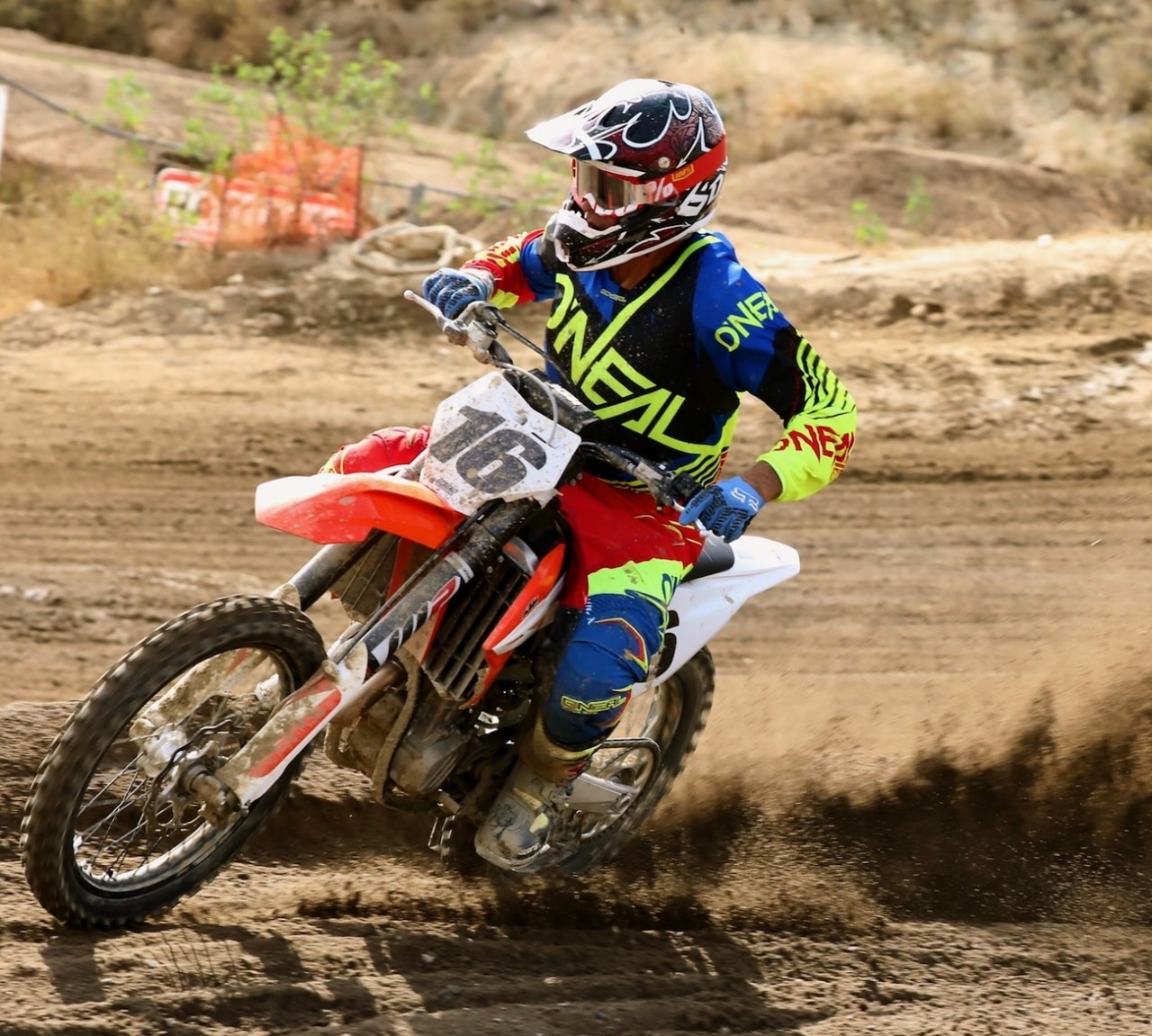 Canada’s Pete DeGraaf is a seven-time World Vet Champion with four in the Over-50 Pro class and three in the Over-60 class. Photo: Debbi Tamietti

5:30 a.m. Glen Helen gates open: Riders who aren’t camping can enter the track and pits starting at 5:30 a.m. Sunday is the official World Veteran Motocross Championships day. All the same classes that ran on Saturday will race on Sunday—(except for the Over-40 Pros and the Over-50 Pros who named their Champions on Saturday).

1:00 p.m. Dubya World Vet Cup moto two: The first moto was held on Saturday and the second moto will be held on Sunday at 1:00 p.m. 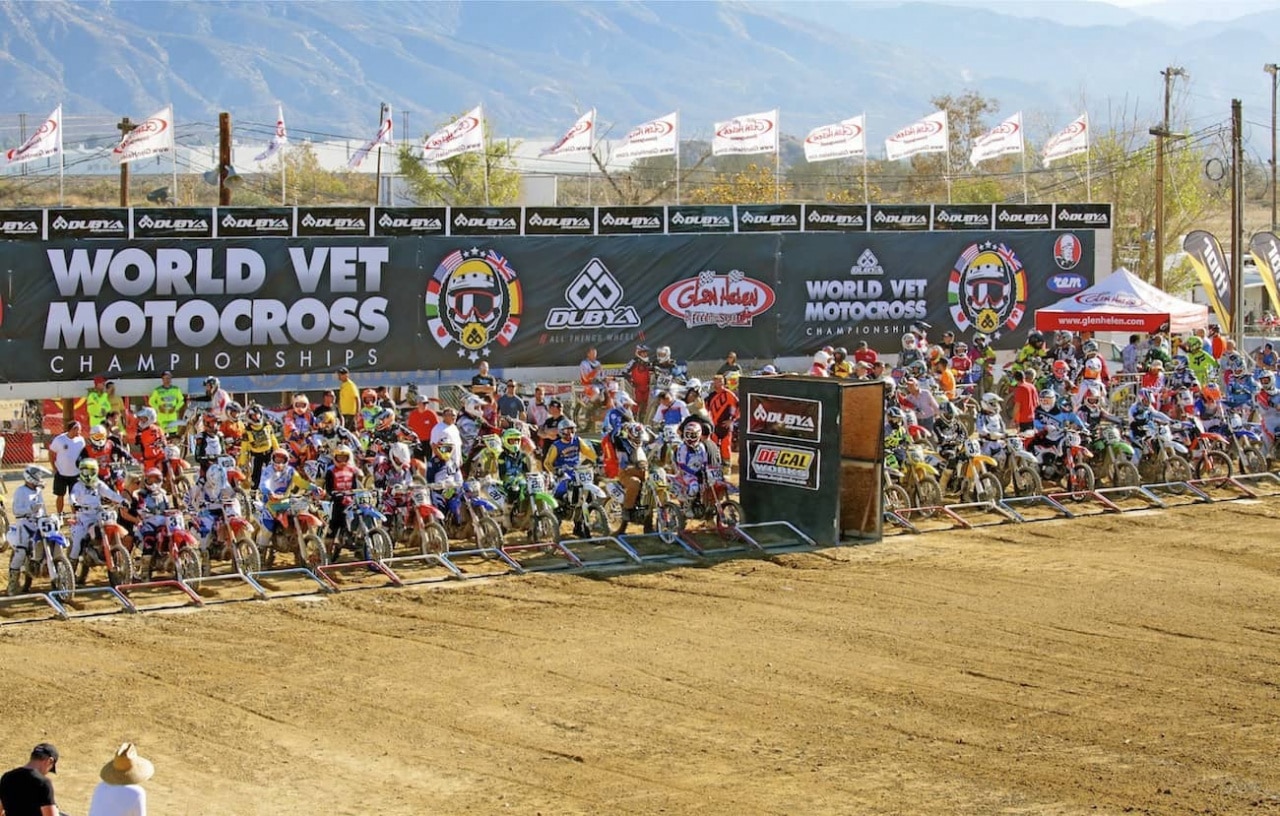 Malcolm Smith (right) introduces Edison Dye to the crowd at his 1999 induction to the award named after him. Roger DeCoster and Feets Minert are behind Edison.

The Edison Dye Motocross Lifetime Achievement Award  is named after the man who brought motocross, motocross bikes and the Inter-Am race series to the United States back in 1967. The award has been received in the past by Edison Dye, Roger DeCoster, Jeff Ward, Joel Robert, Gary Jones, Torsten Hallman, Bruce Brown, John DeSoto and 25 other notables. This year the 2019 Edison Dye Motocross Lifetime Achievement Award will be presented to Pro Circuit’s Mitch Payton —the winningest team owner, tuner and mentor in AMA history (with well over 200 AMA Pro victories). 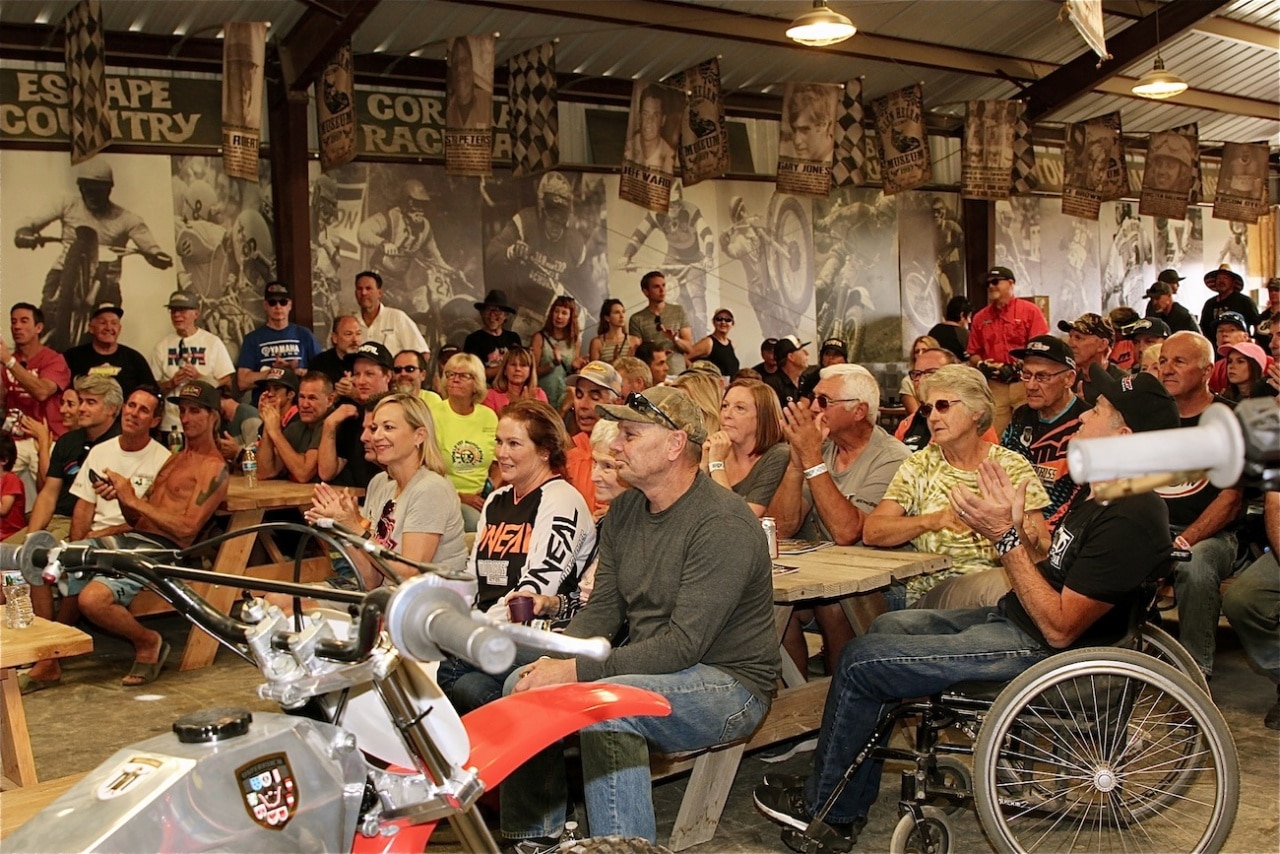 The Glen Helen Museum is always packed with racers and luminaries for the Edison Dye Lifetime Achievement Award ceremony. Get there early for Sunday’s presentation.

The noon presentation in the Glen Helen Museum has traditionally been used to honor motocross legends. Additionally, during this time, the track crew will smooth out as much of the downhills and jumps as time allows. Glen Helen Raceway and Dubya are proud to announce the 1st Annual World Vet Cup of Nations. It is a chance for Veteran riders to represent their countries as part of three-man national teams. Each country will be allowed up to 3 teams consisting of 3 members. Each team must have a 30+, 40+, and 50+ riders on the team. These 3 riders can be of any skill level. The event will be a two-moto format with the first moto on Saturday and the second moto on Sunday. Netherland’s Ralf Schmidt  has a Dutch Team ready to go for the World Vet Cup.

The riders in the Cup of Nations will line up in three rows with the Over-30 riders on the first gate, Over-40 riders on the second gate and Over-50 riders on the third gate. Don’t worry the track will be long enough to allow each gate a window of their own  to get sorted out.  Riders will all receive race bibs indicating the country they represent colored to indicate their age group. Each rider will be scored in his age group only. The results of each nation’s three rider (times two motos) will be added together and the nation with the lowest score  over the two-moto format will be named the winning country.  With three riders racing on Saturday and three on Sunday, each nations will have 6 scores (all 6 scores count in the final results—the worst score will not be dropped). A perfect score would be 1-1-1/1-1-1=6 Teams must apply and be accepted for each country. To represent your country, you must be a citizen of that country. The World Vet Cup of Nations Jury Committee will review all applications. If more than three teams are entered from the same nation, the World Cup Jury will choose the three teams that will be allowed to race.

For teams that are in flux, there will be a sign-up booth at the Glen Helen Tower each day just for the World Cup teams. Nation team can be formed leading up to the race (which have one moto on Saturday and one on Sunday). However, entering early ensures that your World Cup bib will have your countries flag on it. If you want to race the World Cup, but do not have enough riders to make up a team to represent your country, you can still apply and the committee will attempt to partner you with other individuals from the same country to make up a team—which is why Glen Helen encourages riders from different countries to come to sign-up and apply as individual—because it is possible that you could be paired with two other riders from your country to form a team on the spot. Great Britain’s Kurt Nicoll (2) has put together a powerhouse team for the World Vet Cup, but first he wants to nail down the Over-40 and Over-50 titles. Doug Dubach has won more World Vet Pro Championships that any other rider. He will race for Team USA #1 in the World Vet Cup of Nations.

The official rules require each to have a 30+, 40+, and 50+ riders, but It is interesting to note that teams can be composed of all Over-40 and Over-50 riders without benefit of an Over-30 rider. Since rules require one 30-year-old, one 40-year-old and one 50-year-old, they can race with an older rider as a replacement for the 30-year old—as long as he is 40 or 50. That means that the rider designated to replace the Over-30 rider must start with the Over-30 riders from the other countries in the first gate.

Under no circumstances can a team have more than one Over-30 rider.

You can see the World Cup application and sign-up now by Clicking Here. STUFF YOU NEED TO KNOW

PRE-ENTRIES SAVE MONEY: Pre-entries are open until October 30. The pre-entry cost is $90 to race on both days ($50 for a second class). Which makes the entry fee per-day $45 — if you sign-up for both Saturday and Sunday at the same time. Pre-entry for one day (either Saturday or Sunday) is $60 for the first class (and $40 a second class).

TRANSPONDERS: There is no membership or racing license required to race the World Vet. The races will be scored by transponder. If you don’t have one, you can borrow one from Glen Helen, but must leave a credit card, driver’s license or passport to insure that you bring it back after the race is over. You’d be surprised to find out how many riders drive off with the transponder still on their bike. All the Swedish riders at the World Vet lined up for a team photo and didn’t notice that one Spanish rider (far right) had slipped into the line as a joke. They threw him out and re-shot the photo.

2019 RULE CHANGE: Riders can ride in their age appropriate class (and any class younger than their actual age), but starting in 2019 riders cannot drop a skill category when the ride in a younger class. That means that an Over-50 Expert cannot race the Over-40 Intermediate class. He must race at his skill level in every class he’s in. Check at sign-up because some classes, like the Over-70 riders, may be allowed to drop a skill level when they drop to a 10-year younger class (for example an Over-70 Expert would be allowed to race in the Over-60 Intermediate class).

THE AGE RULE: The Over-30 class is for racers over 30 and it doesn’t matter if you will be 30 in one month, one week or one day. If you aren’t 30 (or 40, 50 , 60 or 70), you will not be allowed in those classes (and if you are caught cheating on the age rule, you may not be allowed to race the World Vet for several years as punishment). You must bring your driver’s license to sign-up to prove that you are the right age before transponders will be handed out. No driver’s license—no race. This goes for both pre-entered and post-entered riders, who must check in at the tower to tell the officials that they are actually there. For all info or to pre-enter go to www.glenhelen.com Glen Helen is hilly. The course rises and fall continuously. The lap times are over three-minutes for most of the riders. It is what a real motocross track should be—long, rough and challenging. But there are no big doubles.

BE THERE! MITCH PAYTON TO BE AWARDED THE EDISON DYE LIFETIME ACHIEVEMENT AWARD ON SUNDAY