December is here and the 2020 Monster Energy Supercross Championship is right around the corner. Honda invited MXA out to the American Honda 2020 AMA Supercross and motocross team presentation at their private Supercross test track in Corona, California. Thirteen riders from four different Honda teams were on hand to ride, take photos and do interviews for our cameras. Headlining the event was factory Team Honda HRC, which will field Ken Roczen and Justin Brayton aboard the factory 2020 Honda CRF450 in the 450 Supercross division. Ken Roczen, who is coming off a runner-up overall finish in the 2019 AMA Pro Motocross series, is preparing for his fourth year with the HRC Honda team. Justin Brayton, who recently just won his fourth Australian Supercross Championship, is returning to the team he last rode for in 2012. Brayton will continue to focus on Supercross racing in 2020, and once the AMA Supercross series concludes, Justin’s seat will be filled by 450 rookie Chase Sexton for the AMA Pro Motocross series. After riding for the MotoConcepts Honda team for a few years, Justin Brayton is happy to be back under the factory tent.

Justin Brayton stated that he knows that Ken Roczen is the #1 rider on the team and Justin is there to help him in anyway he can. But he also is looking forward to having a personal best season as well and he believes that he can learn from Roczen and build off of him. Currently, Justin Brayton holds the record as the oldest rider to win a 450 Supercross main event and he said that he’s looking to beat his own record again this season. Chase Sexton wearing the #1e that he earned by winning the 2019 250 East Coast Supercross division. Ryan Dungey is excited to use his knowledge and experience to benefit the younger riders on the Factory Connection Geico Honda team. To learn more about Ryan’s switch from KTM to Honda, check out our video from the event by clicking here.

Also on hand was the Smartop/MotoConcepts/Bullfrog Spas Honda team, which is based in Victorville, California, and will campaign the 450SX division on the CRF450R with Malcolm Stewart (recently third at the Monster Energy Cup and second at the Paris Supercross), Vince Friese (a veteran with the squad, known for his strong starts) and Justin Hill (new to the team for 2020). Malcolm Stewart is excited to continue building off the speed and potential he has shown in 2019. Justin Hill is enjoying his new MCR Honda ride and he has high hopes for 2020.

“This is always a busy, exciting time of the year with the supercross and arenacross openers around the corner, so it’s fun to take a short break and give our media friends the chance to hang our with our teams,” said Brandon Wilson, Manager of Advertising & Motorcycle Sports at American Honda. “We have four strong teams with solid lineups for 2020, and we take pride in those relationships. There’s every reason to be optimistic for a great year of stadium and arena racing for Red Riders.” Jett Lawrence recently won the Amateur All-Stars class at the 2019 Monster Energy Cup and then made his professional debut in Australia at the Aus-X Open last weakend. Jett finished second overall in front of his home country and now he is preparing to make his AMA Supercross debut in 2020 aboard a Geico Honda. Geico Honda rookie, Jo Shimoda lays it over in a deep rut.

Jo Shimoda grew up in Japan and moved to California to race motocross when he was on 65cc mini bikes. He originally struggled to find support from sponsors as an amateur, but things quickly turned around when the Geico Honda team picked up Shimoda and gave him a shot on their Amsoil Honda amateur program. 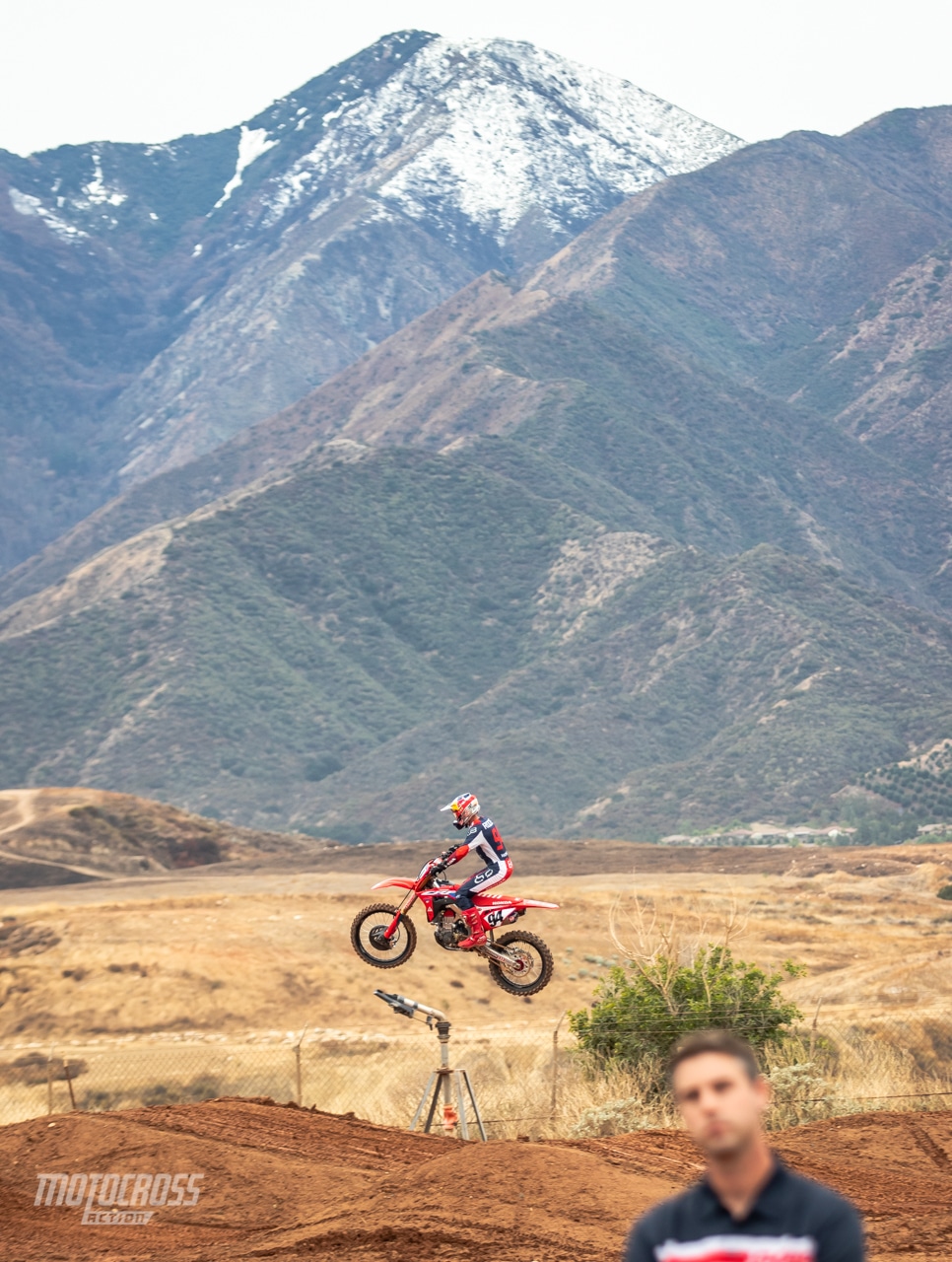 It was cool to see snow capped mountains in the background of the Honda Supercross test track. Jace Owen’s Phoenix Racing Honda. Jace won the Kicker Arenacross Championship in 2019 and for 2020 the AMA Arenacross will return and Jace Owen will line up to defend his title.

In addition to its supercross efforts, Honda presented Phoenix Racing Honda’s AMA Arenacross team, for which defending champion Jace Owen will be joined by Kyle Peters, who begins his first arenacross season. Based in Salisbury, North Carolina, the team also plans to campaign the AMA Supercross 250SX East region rounds. Alongside Jace Owen on the Phoenix Racing Honda team is Kyle Peters.

The 2020 AMA Supercross season kicks off in Anaheim, California, on January 4, one day after AMA Arenacross begins in Loveland, Colorado.