EVERYTHING WE KNOW ABOUT THE FINAL 7 ROUNDS OF 2020 SUPERCROSS IN SALT LAKE SO FAR: SOCIAL DISTANCING, MASKS & COVID-19 TESTS

The 2020 Monster Energy Supercross season was off to a great start when Justin Barcia grabbed his second 450SX Main Event win in a row at the season opener, 450 rookie Adam Cianciarulo was contending for race wins, Ken Roczen won his first Main Event since suffering intense arm injuries and then backed it up with two more, Eli Tomac was winning races with more consistency than before, defending Champion Cooper Webb was making incredible late race passes and fighting with all he had to defend his title. The beginning of the 2020 season was unfolding beautifully for Supercross fans, but it all came crashing down when the government shutdown the country for COVID-19. With all major sports canceling the remainder of their 2020 seasons, the situation looked dire for Supercross fans. The NFL and NBA are much bigger than Supercross and if they aren’t back up and running, how could we expect the sport of Supercross to preserve and finish the season out in the middle of this pandemic?

Thankfully, FELD Entertainment pulled it off and we’re happy to know that the stars of Supercross will be back behind the starting line inside the Rice-Eccles Stadium on May 31st in Salt Lake City, Utah. Sadly, fans won’t be allowed in the stadium. However, the racing will be broadcast LIVE on the NBC and NBC Sports Networks and that’s much better than watching re-runs over and over. 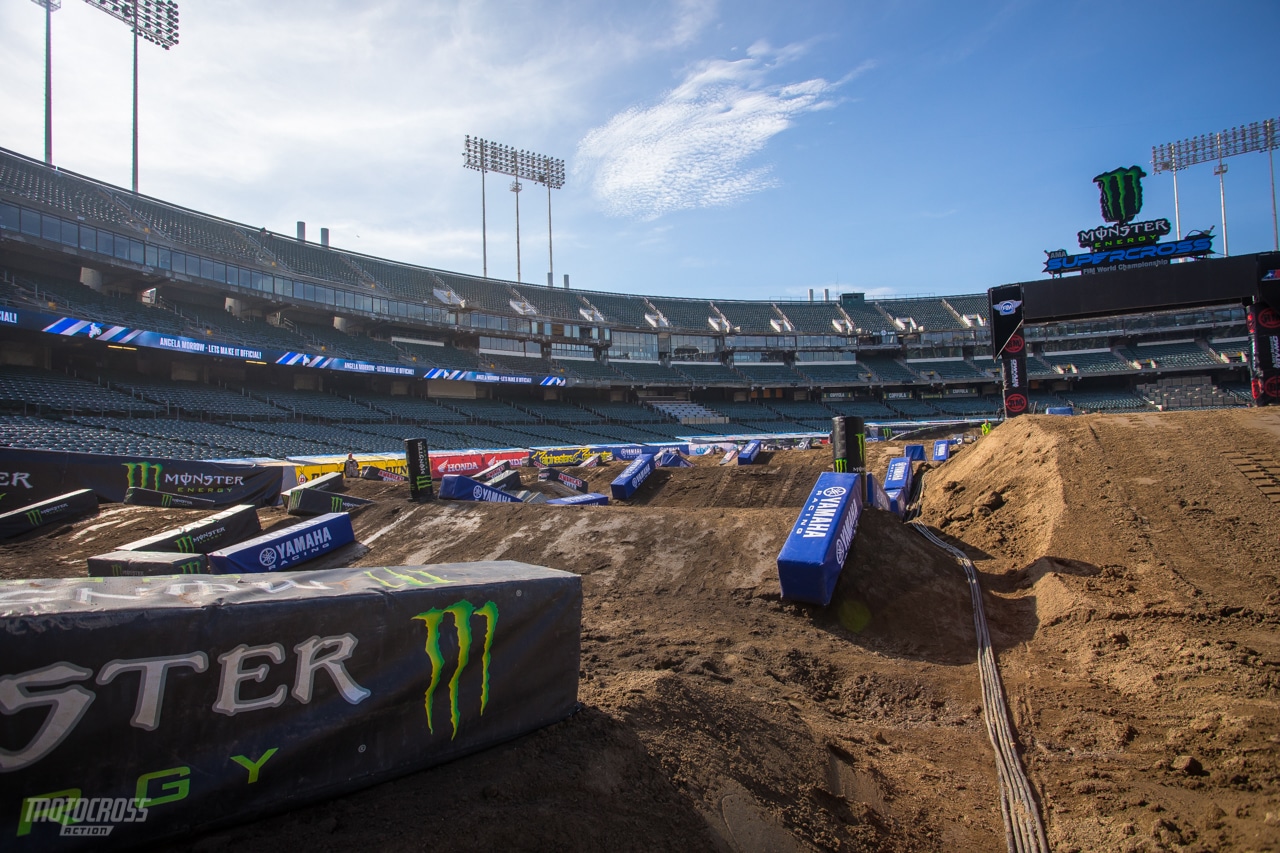 Sadly, spectators will not be allowed into the stadium for the final seven rounds of Supercross in Salt Lake. For the first time ever, Eli Tomac, Ken Roczen, Cooper Webb and the rest of them will be racing without fans in the stadium.

So why are we going to Salt Lake?“It came down to who would give us the green light first. Obviously it helps that we’ve had a long standing relationship with the Utah Sports Commission and the governor and those guys just working their tails off to come up with a plan to keep everyone safe.” —FELD Entertainment’s Dave Prater.

Dave went on to say:“Not only to protect everyone that participates within the event, but to keep the residents of Salt Lake City safe as well as Utah residents safe. That’s what tipped the scale. We are excited about Utah and the relationship we have with them already is going to make it that much stronger and that much more efficient as far as going through these seven races in this three-week process because obviously we got the green light, but we have a lot of work ahead of us still.” So how will Supercross be able to facilitate the final seven rounds inside of the same stadium within a three-week span? We don’t have all the answers, but after hearing from Dave Prater via Zoom chat, this is what we know so far:

-If you test positive for COVID-19, then you will not be allowed into the stadium—even if you’re 450SX points leader Eli Tomac.

-If you leave the state of Utah and come back, you must be retested for the virus before you enter the stadium again and again, you’ll need to wait 48 hours to get the results from that test.

-Temperature checks will be done prior to entering the perimeter on each day of the event.

-Face masks will be required at all times while on site.

-Social distancing will be the “motto” throughout the event per FELD’s Dave Prater.

-The Utah state health department will conduct drive -in COVID-19 tests (as seen on the news) for Supercross. Once the results are back they will be emailed to the individual and FELD.

-Once you take the test, as long as you stay in the state of Utah for the three week span of racing, you won’t need another test.

-Everyone who enters the stadium will need to have signed a “healthy and safety commitment” form which states that they don’t have the virus or symptoms of it. It also says that they commit to follow the Supercross health protocol to respect others around them. (We assume this will also have legal protection on it so that if someone gets the virus, FELD isn’t liable.) The track will be different for each race, but the changes won’t be as drastic as usual.

Dave Prater told us that although we will be racing inside of the same stadium for the final seven rounds, the track will have a unique design for each event. The changes won’t be as drastic as they would be going from Indianapolis to Salt Lake—but they will be different. The layout may be utilized multiple times with different obstacles or the track going in a different direction. Between Sundays and Wednesdays, the track crew won’t have the usual amount of time to create a completely new track. We also expect FELD to utilize the same dirt for each event. In a regular season, racers will experience 17-rounds of racing, 17 new track layouts and 17 different types of soil. The dirt plays a huge factor into how the track develops and each rider has their preference on the type of dirt they like best. The dirt in Salt Lake City has a hard base. It does get ruts in the corners, but it usually dries out quickly and ends up being dusty. MXA’s Assistant Editor Josh Mosiman raced at the Salt Lake Supercross in 2018, the last time Supercross was in Utah, and from experience we can say that the track in Rice-Eccles Stadium is slick. Much like Las Vegas, the track starts out wet for practice and hardens up throughout the day.

Another aspect of the track that will be unique to this event is the fact that the dirt will be staying in the same spot for all seven rounds. Yes, the dirt will be moved around to create different layouts and obstacles, but if the dirt is left in the same spot for certain corners or for the start, it will growing increasingly more and more hard packed as the days go on. Traditionally, Supercross tracks are built in a matter of days, ridden on Friday for press day, ridden on Saturday for the event and then torn down. With the dirt being moved around, it’s naturally softer and this makes for more ruts. Now with the dirt staying in the same spot, if they Dirt Wurx crew doesn’t make major changes, it will grow even more hard packed than usual. This will play into some riders strong points and other riders weaknesses. After his crash in the second Main Event at the Arlington SX triple crown, Cooper Webb lost 15-points in one event to Eli Tomac and 12-points to Ken Roczen in the point standings. Now he comes into round eleven in Salt Lake 29-points behind the points leader, Eli Tomac. It’s a big gap, but with seven rounds to go and Cooper’s never-say-die riding style, anything can happen. Dylan Ferrandis comes into the final three rounds of the 250SX West Coast series with a seven point lead.

RACE FORMAT FOR THE LAST SEVEN RACES OF 2020