FIRST LOOK! 2012 HUSQVARNA MOTORCYCLES: 14 DIFFERENT MODELS IN ALL (INCLUDING A 310 FOUR-STROKE AND FOUR TWO-STROKE VERSIONS)

Husqvarna was once a major player in American motocross. They won National Championships, sold thousands of bike a year and were a powerhouse in every aspect of offroad racing. They want to get back to where they once were. In real estate, the prime directive is “location, location, location,” and in offroad motorcycles the mantra is “product, product, product.” Here is what Husky has up its sleeve for the 2012 model year. Aside from shared changes across the 2012 Husqvarna model line (black frame, silver Excel rims, updated graphics) the CR125 remains unchanged. New for 2012, however, the CR125 (and WR125, as well) will be sold with a free 144cc top-end kit including cylinder and piston (so you can upgrade to a big-bore if you want). The bold new 2012 line of Husqvarna off-road motorcycles have broken cover. Black frames, silver rims, new graphics and sleek styling define the Husky 2012 line. The first models to be released are the cross-country models, including the race-inspired TXC off-roaders and WR two-stroke motorcycles. Husqvarna’s line of TXC motorcycles is developed exclusively for the high demands of the American off-road market. The TXC line returns for 2012, with a host of premium upgrades such as Leo Vince exhausst (on 250/310) and revised Kayaba suspension components. In addition, 2012 also brings an entirely new model?the TXC310!

The TXC310 is based on Husqvarna’s existing TE310 dual-sport bike, but is all-new to the TXC line of purebred offroad racers. A bored and stroked version of the 250 motor, the 302cc, fuel-injected, four-stroke offers more aggressive power characteristics than its quarter-liter sibling, and fills a significant gap in the current range of offroad bikes. For riders looking for robust power delivery that can run with the 450s, and still provide lightweight maneuvering of a 250, the all-new TXC310 is the ideal tool for the job. Joining the TXC310 in the 2012 lineup are the TXC250 and TXC511. All three models receive a new all-black chromoly frame, reinforced for higher rigidity and improved tensile strength. New technology and the addition of select new reinforcements give the 250/310 TXCs an entirely new feel?one that is sure to impress even the most demanding off-road riders. The reworked frame not only provides better handling capabilities, but also substantially improves long-term durability.

Further chassis upgrades include the Kayaba shock?which replaces the Sachs shock on the 250. The existing Kayaba shock on the TXC511 receives a new progressive spring, as well as revised damping, allowing it to provide a plusher ride without sacrificing any mid-stroke capability. Up front, the TXC line features premium Kayaba suspension on all three bikes. The 48mm closed-cartridge fork receives revised damping, making the TXC more capable than ever of tackling tough terrain while providing a supple ride for everyone to the casual trail rider to aggressive cross-country racer.

In the power department, the TXC250 is markedly improved, as well. Husqvarna focused on gaining maximum performance from the 2012 TXC250, and heavily revised the fuel-injection system for optimum power output. An all-new Leo Vince exhaust system and revised ignition timing allow the 249.5cc fuel-injected powerplant to run stronger and churn out bigger power. The six-speed gearbox allows the TXC250 and 310 to stretch their ponies across a wide spectrum, making both bikes willing accomplices in a variety of offroad terrain.

The TXC511 remains the open-class offroad specialist. The California green-sticker-legal four-stroke features a fuel-injected, 477.5cc engine, revised and fine-tuned for 2012 to smooth out the power delivery. The dual-flap ignition system is re-tuned to improve low-end power, resulting in an overall better-running bike. Like its TE counterpart, the TXC511 receives a new single-piece tail section, simplified to improve aesthetics and function. Ergonomics are significantly improved with the narrower tail piece, which is also 15mm shorter than last year’s.

The Kayaba shock body on the TXC511 remains unchanged, but the use of the new progressive spring creates more initial sag and allows the rear end to ride slightly lower. Altering the geometry helps refine the overall balance, and noticeably improves the handling characteristics of the TXC511. Husqvarna’s patented CTS (Coaxial Traction System) works in ideal harmony with the refined suspension components, continuing to provide incredible climbing ability and unparalleled straight-line stability. Husqvarna is proudly still mixing gas with the WR line of two-stroke motorcycles. The lightweight, carbureted WR’s comes in three different displacements?125cc, 250cc and 300cc. Husky’s small-bore two-stroke returns to its 125cc legendary roots, and for those looking that ever-critical 19cc advantage?great news! Every WR125 comes with a 144cc top-end kit, complete with cylinder and piston, free of charge. 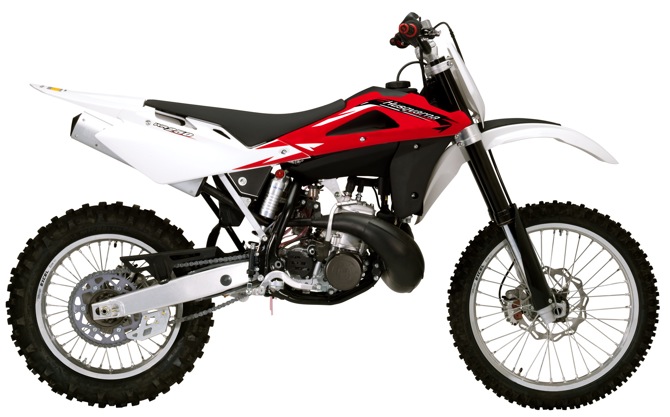 The WR’s are suspended by a Kayaba fork and Sachs shock combo, and feature the same cutting-edge look of the black frames, silver rims and new graphics shared with the rest of the 2012 Husqvarna line. 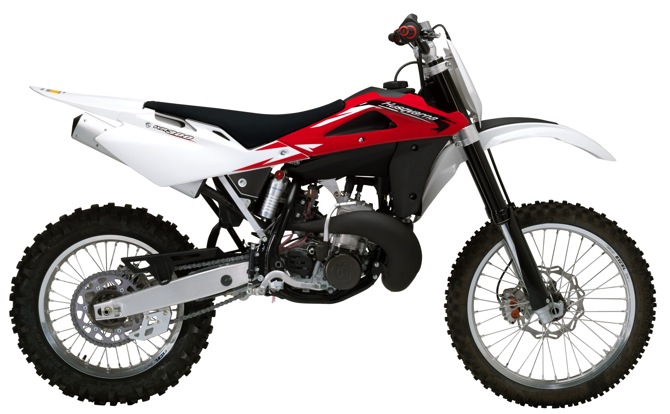 Throw dirt and pound pavement with Husqvarna’s street-legal TE dual-sport motorcycles, the bikes which continue to provide riders the freedom to take aggressive offroad performance to the street!  All four TE models receive new reinforced all-black chromoly frames, silver rims and fresh styling (shared changes with the rest of the 2012 Husqvarna range). Key features also include suspension upgrades and the new TE250 “Low.” The 48mm open-cartridge Kayaba fork is stiffened up with revised damping for a comfortable and capable ride on road and trail. The TE250 and TE310 are both also upgraded to the Kayaba shock. New in distinguishing the 250 from its larger TE310 sibling is a lower seat height. The Kayaba fork and shock on the TE250 are both shortened, resulting in a more user-friendly seat height (approximately 50mm lower than last year). The “inseam challenged” will also appreciate the slightly lower saddle height on the 449 and 511 TE, both of which receive a 4mm shorter Kayaba shock. Designed specifically to complement the CTS (Coaxial Traction System), the upgraded rear suspension improves the handling characteristic and overall balance of the 449 and 511 chassis. On the front end, the fork valving is more aggressive for even better off-road performance. The focus on the 2012 TE449 and TE511 was to make them more approachable all around, so along with a shorter seat height and refined suspension, the chassis is also updated with a streamlined wiring harness and a sleeker one-piece rear fender. The TE449 and 511 also run cooler than ever thanks to the addition of high-performance WP radiators.

For more info go to www.husqvarna-motorcyclesna.com

WATCH IT NOW! DEAN WILSON IS IN THE DRIVER’S SEAT FOR THE 250 MOTOCROSS TITLE; HE TALKS ABOUT IT