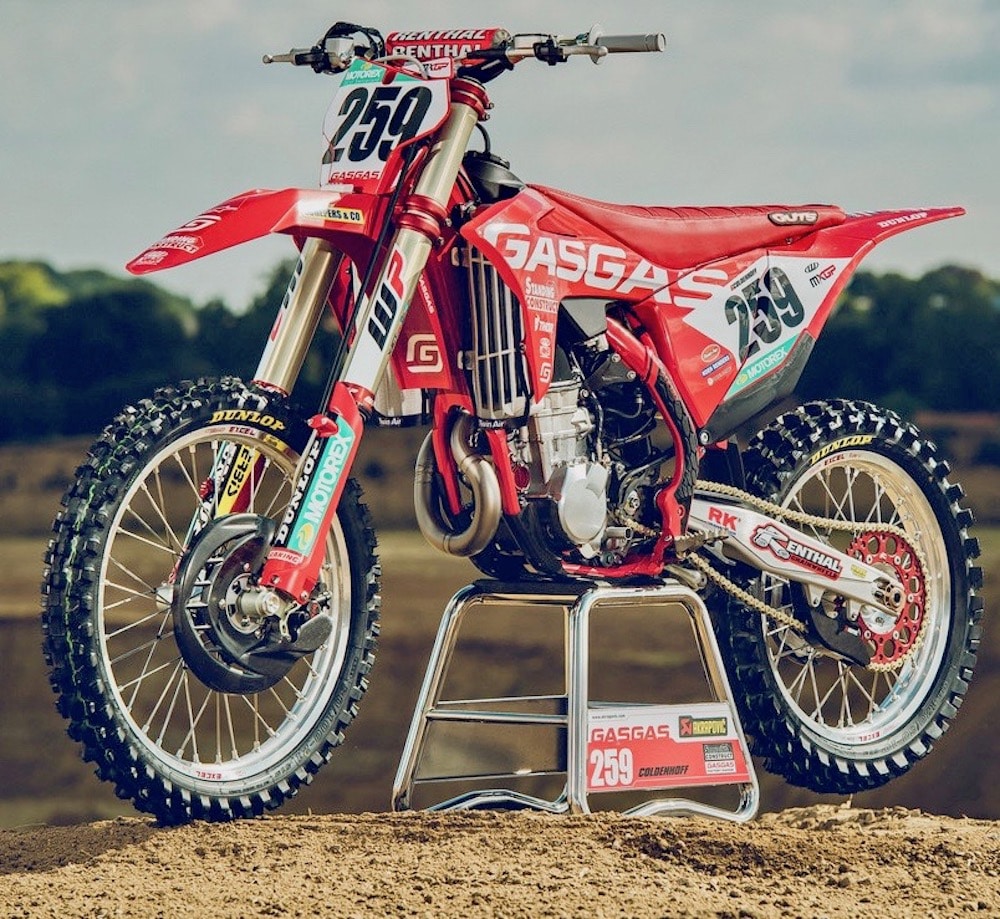 Although not the 2021 production model, the team bikes offer the first clear look at the new GasGas plastic, frame color and graphics. This is Glenn Coldenhoff’s 2021 GasGas MC450F. GasGas  is the third brand in the KTM orbit and thus shares with its KTM and Husqvarna brothers a list of components.  Even though it uses Austrian parts, KTM has ensured the GasGas factory workers that it will stay a Spanish project.

Glenn Coldenhoff said “This new bike is something I’ve really been looking forward to. It looks great and it’s really cool that we will return to racing with a new bike. Obviously, the last few months haven’t been like everyone expected but this is a special moment for us all. I’m feeling really good and my feeling with the new bike is great. I just want to get behind the gate again now and start racing.” Robert Jonas, VP Motorsports Offroad said, “This is another milestone for GasGas Motorcycles. Knowing that Glenn, Ivo, Jeremy and Simon will be heading back into MXGP and MX2 competition on the new GasGas MC450F and M 250F factory machines is a proud and important moment for all involved. Following GasGas’ return to top-flight motocross earlier this year, introducing these new bikes was a key next step for us. Knowing just how much both Standing Construct GasGas Factory Racing and DIGA Procross GasGas Factory Juniors are looking forward to getting back to racing, for them to be able to complete their final weeks of preparations and then head into what will be a busy few months of MXGP racing with their new GasGas Factory Racing machines is really exciting. We’re really looking forward to seeing these new bikes out on track and to all of our riders continuing their 2020 MXGP and MX2 seasons.” This is the Gas Gas MC250F of 250 Grand Prix rider Simon Laengenfelder. If you can’t recognize the 250 engine, you can tell the difference between the MC450 and MC250 by the length of the head pipe.

In the MXGP category both Glenn Coldenhoff and Ivo Monticelli are well prepared for their return to the highly competitive class. With Monticelli looking to put a frustrating start to his 2020 season behind him, Coldenhoff will resume his quest for a place inside the championship’s top five.

ELI TOMAC INTERVIEW: CATCHING UP WITH THE NEW SUPERCROSS CHAMPION