Ricky Carmichael, Jeremy McGrath and Travis Pastrana came together for a special end-of-season Supercross battle on the Tonight Show parking lot in Burbank, California, on May 11th, 2001.

Leno had Pastrana and Jeremy on his show the year before for a similar showdown, and the producers were stunned when they got more requests for media credentials for that show than they did when Hollywood stars like Tom Cruise were booked for the show. There was so much interest in the show that they decided to bring McGrath (paired with Carmichael this time) back. Of course, it doesn’t hurt that Jay Leno is a motorcycle buff, was occasionally seen riding his street bike in the hills of Los Angeles. Jeremy McGrath in makeup getting ready for his live TV appearance.

In keeping with the show the year previous, a mini Supercross track was built in the parking lot, right outside the sound stage. The MXA crew showed up at 11:30 in the morning, five and a half hours before the taping, and found Carmichael already on the track practicing and doing some spectacular whips over the triple-jump in the middle of the second of the three straightaways. A few dozen fans, friends and spectators hung around the perimeter watching and snapping photos. Ricky Carmichael showing off for the crowd.

After he was done, the wrecking crew was  invited into the building to grab some food in the Green Room. There was one slice left from about six large pizzas that had been delivered around noon. Somebody said that Run DMC had eaten most of it (they were guests on the show that night, too), but we think they got some help. They took the last slice and some Krispy Kreme donuts (there were dozens of them piled up in boxes), the only other food in there. Carmichael poses in front of the Jay Leno sign.

McGrath showed up about an hour later. Each rider was allowed practice time on the track, and Jeremy was scheduled after Ricky. Jeremy was more businesslike in his approach to the track. While Ricky spent a lot of time whipping the bike sideways and flat, Jeremy spent most of his time just practicing his lines to go as fast as he could. He did a few style jumps, but not nearly as many as Ricky, and said that the triple jump was too quick for him to do one of his trademark nac-nacs. 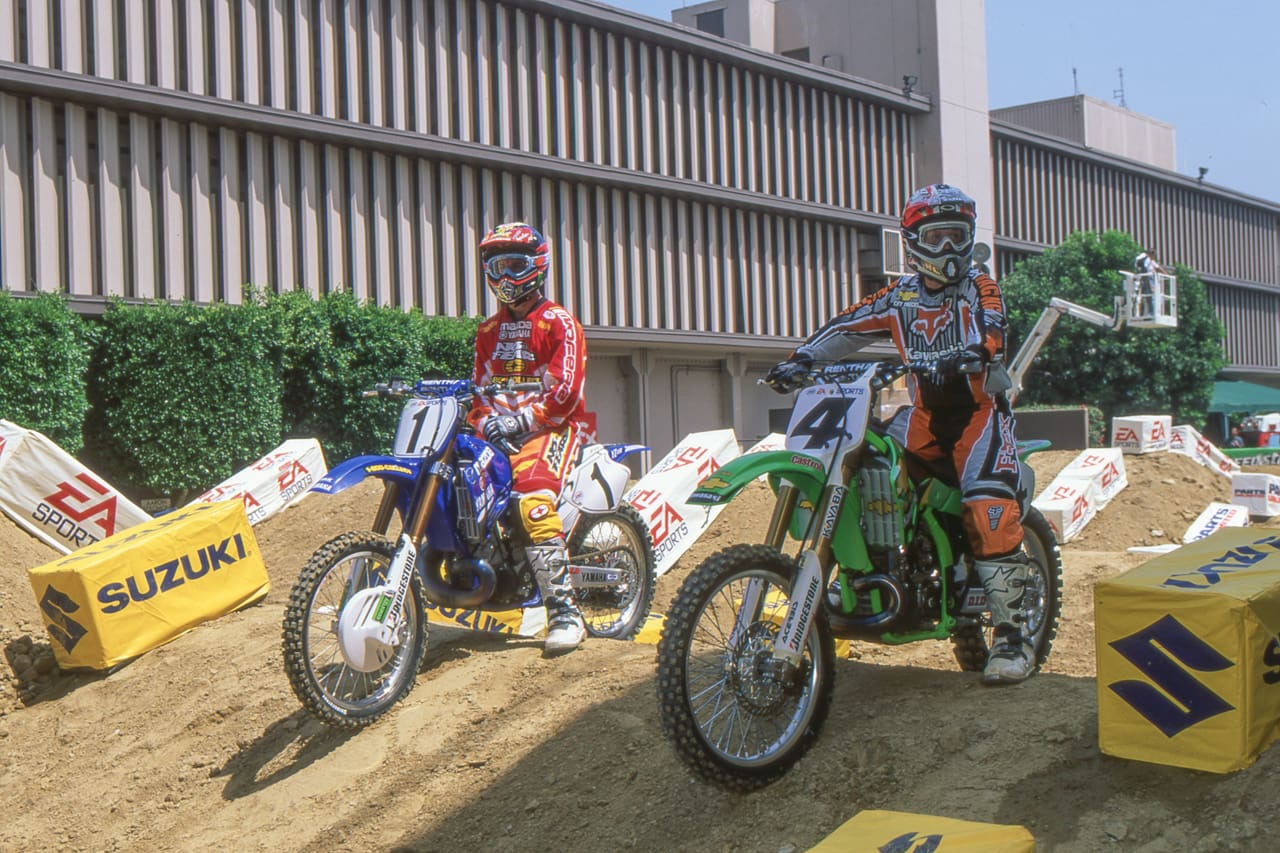 Jeremy McGrath and Ricky Carmichael get ready for battle in front of a live crowd.

Pastrana showed up a little later. He was there to offer expert commentary on the race instead of ride. About two hours before the taping of the show, the producers brought the guys on stage for a rehearsal of the show. Leno wasn’t there for this one. The producers did mock introductions, the riders came on stage with their bikes, then they each did their timed rides around the track, starting from the stage, going out through the audience, down the corridors, out the door, around the track about three times, then back into the building, where they finally jumped off a ramp onto the stage, with fireworks going off just above their heads. The producers would time the runs during the show, but they didn’t have a clock working for the rehearsal. We timed one of the runs and it took 50.28 seconds. The producers prohibited photographers from shooting photos in the studio. Union rules require that only union photogs take pictures on the set. (Freelancer Steve Bruhn was reportedly caught shooting photos without permission in the studio and ordered outside). A young Travis Pastrana was in attendance as a commentator.

There was a lot of time spent waiting around when television shows and movies are made. There were  nearly two more hours to kill before the show’s taping. Ricky and Jeremy each had private dressing rooms well stocked with fresh fruit, bagels and cream cheese, other food and beverages. Jeremy was accompanied by his fiancee, Kim Maddox, who is as friendly and charming as she is beautiful. She was wearing an impressive diamond engagement ring. She and Jeremy had just gotten engaged a week earlier. Our photographers were stationed outside the studio for the taping of the show. Loudspeakers outside let them hear the dialogue on the show, if they stood near them, but that wasn’t possible when positioned near the track so shoot pictures. When the riders finally got on for the second half of the show, our photogs stayed outside and shot some pictures of Jeremy and Ricky ripping around the track.  Carmichael beat McGrath by something like eight tenths of a second (Jeremy looked like he scrubbed off too much speed skidding into the corners, Jody said later), but they both won trophies for their efforts. After the show was over Jay Leno got in his blue Corvette and hit the road.

Jay actually brought Ricky and Jeremy over to the couch and interviewed them (a big honor on the show) before their race. Jeremy was pretty talkative on camera. Jay asked him about the last Supercross season (2001), and Jeremy told Jay that Ricky beat him this year, but that he is planning to take the title back from him again next year (Jeremy didn’t end up winning one race in 2002 and placed 3rd in points behind Carmichael and Vuillemin). Ricky didn’t get to say as much. Travis was only brought on during the racing episode to give his commentary on the action, and even then, he wasn’t given too much air time.

After the show was over, Jay posed for pictures with the guests and some members of the studio audience, then drove off in model Corvette. The bulldozers were brought in about the time Jay was leaving and began to clear out the dirt. The shortest Supercross event of the 2001 season was over.

THIS WEEK IN MXA: “BLUE OR ORANGE, IT’S JUST WHO…