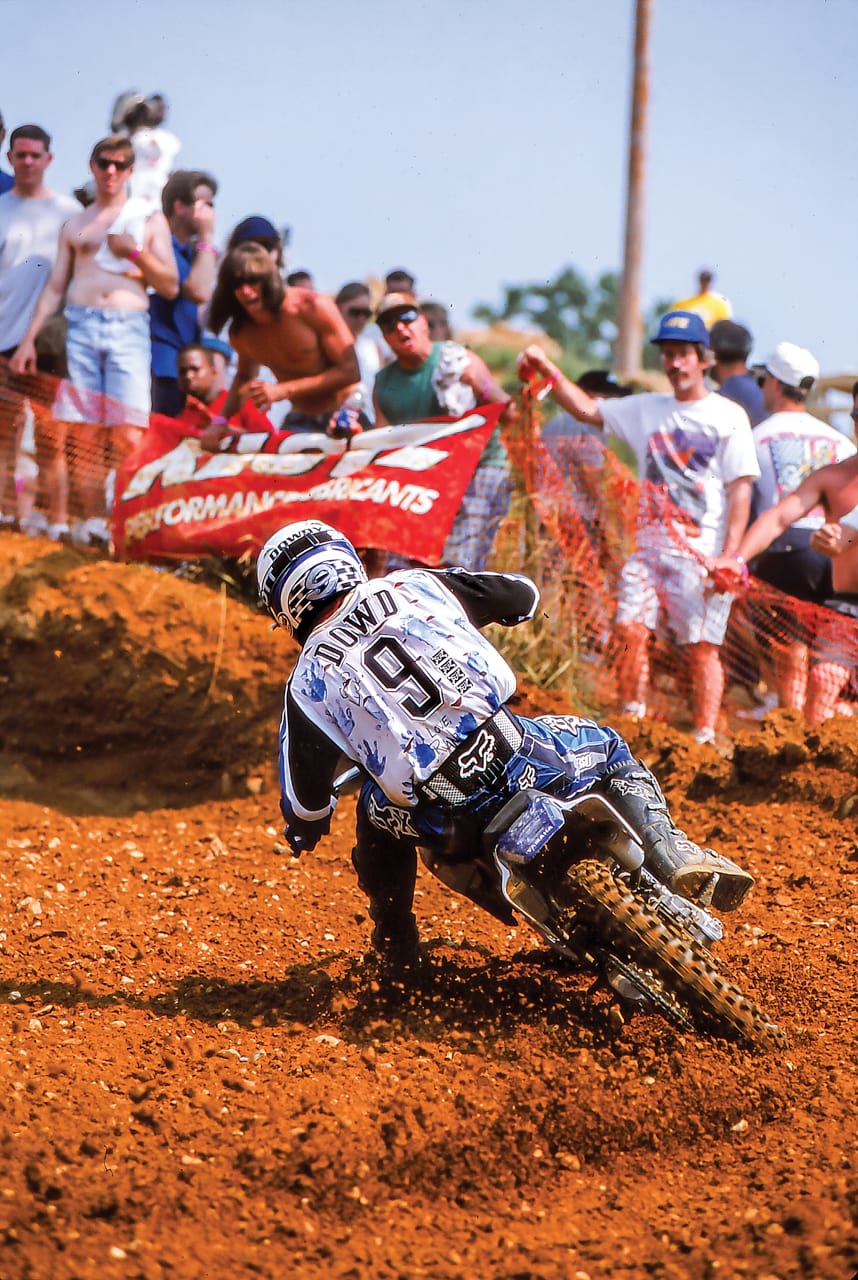 John Dowd didn’t turn Pro until he was 21 and hit his stride at the tender age of 28.

How old is too old to race professional motocross? That answer depends on the rider’s health, genetic makeup, mental fortitude and willingness to continue. Motocross is a young man’s sport due to the physical strain that racing puts on the body. Statistics don’t lie. Only four riders over the age of 30 have ever won a 450 Supercross race, and no one in his 30s has ever won a 450 Supercross title. Modern racers typically turn Pro around 17 and, if they’re lucky, log a dozen years before calling it quits. Father Time is unforgiving to even the greatest. But then there was John Dowd, a rider who didn’t turn Pro until he was 21 and hit his stride at the tender age of 28. Apparently, the “Junkyard Dog,” a nickname he acquired working at his father’s junkyard, found the fountain of youth between two broken-down Winnebagos on the family lot in Chicopee, Massachusetts.

In a four-year span—from 1994 to 1997—John Dowd finished no worse than seventh overall in a series. He was runner-up in the 250 Nationals (twice) as well as the 1996 AMA 125 East Supercross series. Yamaha team manager Keith McCarty signed Dowd to a factory deal in 1995 alongside rookie Kevin Windham. John Dowd later said, “Kevin and I clicked. We had a lot of fun and hung out together. It was our first year on a factory team, so there weren’t any preconceived notions about how we were supposed to act.” Dowd rewarded Yamaha with outstanding rides, including victories in the 125 and 250 Supercross and National classes. Oddly enough, after Dowd finished second overall in the 1997 250 National series, Yamaha asked him to drop down and race the 125 class for 1998. The strangely hatched plan, although thought to be asinine at the time, worked. John collected the 125 West Supercross title over David Vuillemin and was close to winning the outdoor crown. If it hadn’t been for a blazingly fast red-headed kid from Florida by the name of Ricky Carmichael, Dowd would have swept the field in 1998.

John Dowd knew that besting Ricky Carmichael in the 125 Nationals was going to be a tall order. He later admitted, “I remember those races well, and thinking if it weren’t for that little Carmichael kid, I would have won the title [laughter]. Throughout the series I had battles with Carmichael, Steve Lamson and Robbie Reynard.” Dowd started the series with strong 2-2 moto performances behind Ricky Carmichael at the Glen Helen opener. Dowd won the first moto at round two in Hangtown, but it was hometown hero Steve Lamson who captured the overall. The points remained tight between Carmichael and Dowd throughout the beginning stages of the championship. Southwick, Massachusetts, served as the fourth round of the series. It turned out to be a magical day for the 32-year-old. He went 1-1 in front of friends and family.

Dowd can still vividly recall the 1998 Nationals. “I was actually surprised to do what I did with Carmichael, because he was already one of the prospects the year before. Everyone expected him to come in and win. I had a couple surprising races, races where I even surprised myself. I did think I could get him at Southwick, and I beat him that year. He’s from Florida, so he was a good sand rider. I went 1-1 on the day. His bike blew up in the first moto, but my claim to fame was that I passed him before his bike blew up [laughter]. We had a lot of fun. I got along well with Ricky, and we were always pretty good friends. I ended up winning Binghamton that year, too, which was kind of cool.”

When the dust settled, Ricky Carmichael won the 125 National title by 48 points. While Dowd never earned the coveted National crown, he proved that age is just a number. If the fact that Dowd won a 125 National at 32 doesn’t shock you, then consider this: he finished third overall at Southwick in 2009 at age 44. What’s his secret? According to the Dowd, it’s all about having the right mindset. “I still feel like a little kid, and I love riding. It’s better than therapy. In fact, motocross is my therapy.” We can all learn from John Dowd.

COOPER WEBB OUT FOR ATLANTA SUPERCROSS