‘Daredevil’ is a word that is overused. Mainstream media cling to the word, because it draws attention. People are enamored by stunts–a surefire combination of the thrill of danger and the potential for success. Evel Kneivel was, is, and evermore shall be the greatest “daredevil” to ever live. He famously said, “Anybody can jump a motorcycle. The trouble begins when you try to land it.” Tell me that statement doesn’t make you want to idolize the man for being so incredibly cool.

Robbie Maddison was born 50 years too late. The Australian freestyle motocross rider followed in the footsteps of the famed Knievel, although the daredevil shtick has become a popular phenomenon at the circus, on Youtube, as well as on television shows. Maddison is a daredevil to the max; the real deal in an overwhelmingly large group of frauds. Robbie does things that no one has done or ever will do. Don’t point to his distance jumping, because many are willing to strap on a helmet and tap top gear towards a jump. Instead, look at Maddo’s entire body of work. He held world records for longest distance jumped on a motorcycle, backflipped over the opened Tower Bridge in London, jumped over the Corinth Canal (that’s a 300-foot gap), and jumped over the San Diego Harbor. Robbie can do practically every trick in the freestyle motocross book, and he has such fluid style executing those tricks. Of course his riding into waves in “Pipe Dream”–was unbelievable.

In Las Vegas during the “Red Bull–New Year No Limits,” project on December 31st, 2007, Maddo jumped 322 feet . He came screaming out of a parking structure, hit the ramp and cut through the Vegas night. However, what really captured our attention was his Arc de Triomphe jump the following year.

“MAYBE ROBBIE’S CELEBRATION FOLLOWING THE LONG-DISTANCE FEAT SENT HIM ON A PATH TO THE VEGAS STRIP, WHERE HE ENDED UP OUTSIDE PARIS HOTEL AND CASINO. MAYBE, JUST MAYBE, HE THOUGHT IT WOULD BE FUN TO JUMP ON TOP OF THE ARC DE TRIOMPHE.”

After Maddo completed his distance jump in Vegas, it was only a matter of time before the Aussie would come up with something bigger and better. He did. Maybe Robbie’s celebration following the long-distance feat sent him on a path to the Vegas strip, where he ended up outside Paris hotel and casino. Maybe, just maybe, he thought it would be fun to jump on top of the Arc de Triomphe Whatever the case, Robbie and Red Bull teamed up to make Maddison’s dream become reality. 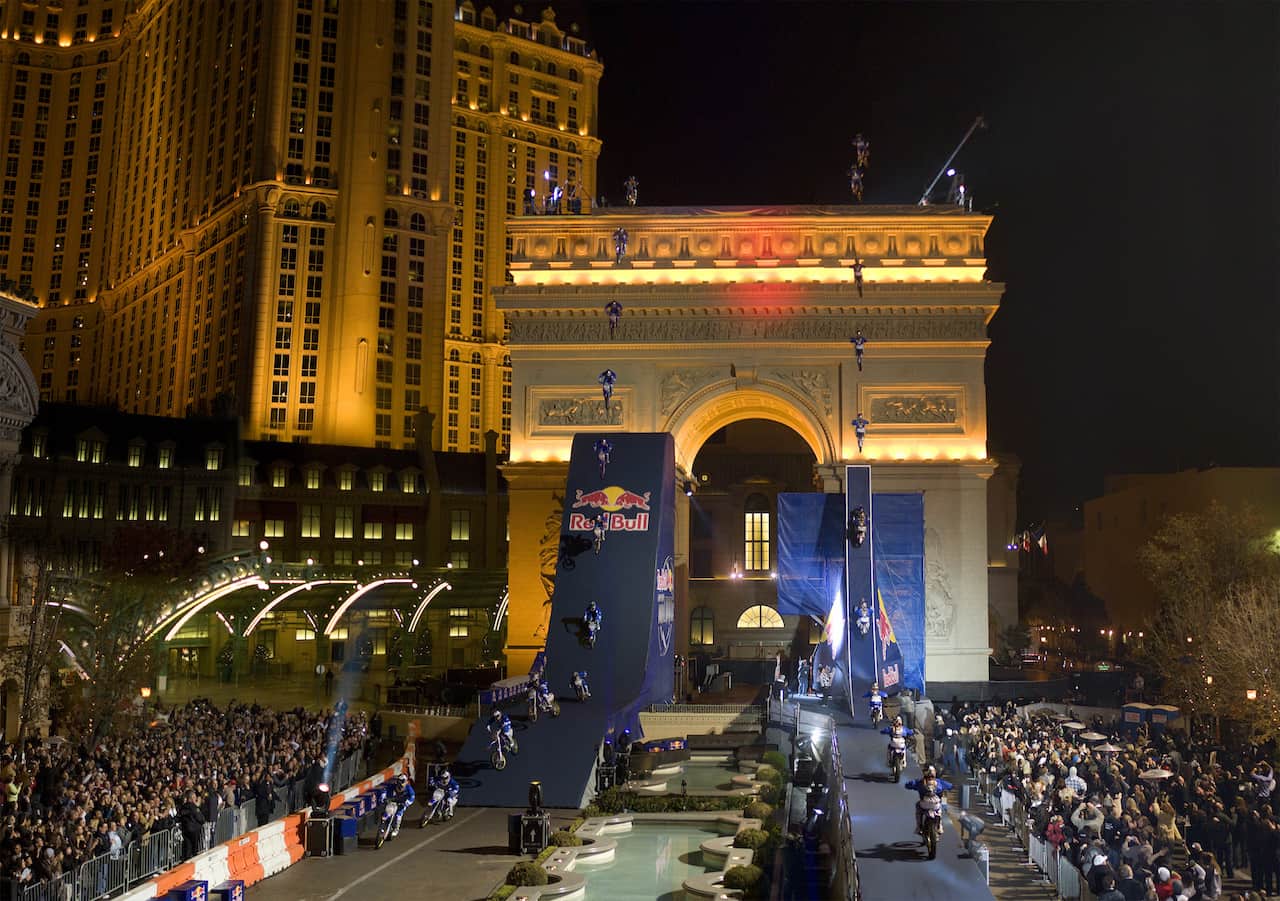 At one time, Red Bull had a huge setup at Wyvern Ranch outside of Piru, California. The MXA office is a 20-minute drive from the Ranch, so we would frequently visit the top-secret facility to shoot photos. One day we received a call from Dane Herron, who oversaw the grounds, asking if we were interested in getting exclusive content. We naturally agreed. Driving by the orange orchards and down a pothole-riddled dirt road, we didn’t know what to expect.

Half a mile away there sat a scaffolding and ramp. Red Bull had something big going on, and Robbie Maddison was out warming up his bike. We watched in awe as Maddo took several test runs towards the ramp as his buddy used a speed gun to read Robbie’s approach speed. We approached Dane Herron and asked, “Does Robbie really think he’s going to jump up to the top of that scaffolding?” Dane laughed, responding “Yep, and after he jumps up there he’s going to jump back down.”

Maddison launched 96 feet up to the top of the scaffolding, rolled around a few times, and proceeded to free-fall off the ledge and down a landing ramp. If you look closely you’ll see that Robbie did a one-hander while dropping back down to Earth. The whole thing was straight-up stupid. Two weeks after the photo of  Maddison was shot doing the unthinkable, he showcased his talents to the world for the second annual Red Bull–New Year, No Limits. Only on New Year’s Eve he overshot the landing and nearly augured into the ground. The impact sliced open his hand, but he was no worse for the wear. After all, true daredevils don’t feel pain.