This is the AMP Research prototype as it looks today. Although a few parts are missing, there is nothing major. In truth, it looks as though it has not been ridden more than one hour in the last 30 years. Even the original numbers are still on the front plate.

After 30 years of silence, Harry Leitner, son of ATK and AMP Research founder Horst Leitner, got a Facebook message from an Austrian motorcycle racer named Hanson Schruf asking about a bike he had—that Hanson thought was a special one-off KTM prototype. Harry recognized the bike immediately as a special project that his father Horst had built in AMP Research’s Laguna Beach facility under contract to KTM back in 1989. Although the cone pipe is a little corroded, the fiberglass fuel tank, original seat and all the plastic remain intact. Those are even the original KTM radiator wing decals that were put on before the bike was shipped from Laguna Beach to Austria in 1990.

Horst designed and built the bike because KTM’s then-owners wanted a “bike of the future” to show their engineers about the possibilities in motorcycle design. When Horst was finished building the bike, he told MXA’s Jody Weisel that MXA could ride and race bike before it was crated up and shipped to Austria. In hindsight it was a good thing that Horst gave the bike to MXA before he gave it to KTM, because once the bike got to Austria is was never seen again—until Hanson Schruff sent these photos to Harry Leitner. Austrian racer Hanson Schruf ended up with the prototype just recently and contacted Horst Leitner’s eldest son Harry to find out more about it. That was the first time the Leitner’s had heard anything about or seen the bike since they built it.

You can read the complete story about the 1990 AMP Research KTM 125SX prototype below. And see photos of what it looked like just before it was shipped to Austria a long, long time ago. It’s nice for Horst to finally find out what happened to the bike he designed. The paint on the frame only shows wear marks on the trailing edge behind the footpegs. Makes you wonder how  much time KTM’s 1990 engineers put into actually testing the bike.

THE STORY BEHIND THE LONG-LOST KTM 125 PROTOTYPE Amazingly enough, American’s greatest motorcycle designer is in the Mountain Bike Hall of Fame, but not the AMA Motorcycle Hall of Fame. What would you expect from the AMA?

In the annals of American motocross, only one man can lay claim to having played the primary role in the development of a series of important offroad motorcycles, designed bikes for major corporations and foreshadowed America’s interest in four-stroke motocross bikes. That man is Horst Leitner. Born in 1942 near Salzburg, Austria, Leitner was a Grand Prix and ISDT motorcycle racer. He earned four ISDT gold medals in the demanding International Six Days Trials, along with the Austrian National Motocross Championships. But, Horst Leitner saw America as the place where his motorcycling dreams could come true. The ATK 604 four-strokes were the best selling motocross four-stroke made—until the Yamaha YZ400F came along a decade later.

Moving to Laguna Beach, California, was the impetus that Horst needed to design and build his own motorcycle brand—ATK. The ATK 560 and ATK 604/605 four-strokes were instant hits. Every ATK 605 buyer was committed to the idea that the four-stroke was the powerplant of the future—a decade before the YZ400F was introduced. Back in 1989 nothing was as intimidating as an ATK 604E (electric start) four-stroke bearing down on you from behind. It sounded angry. The motocross world was all two-strokes back then, so four-strokes were looked on then as two-strokes are now.

Horst sold thousands of ATK 560 and 604 thumpers (with price tags ranging from $7000 to $10,000). Owning an ATK was like owning a Mercedes-Benz; it was a status symbol. His thumpers were so successful that when Team Honda mounted an assault on the 1984 World Four-Stroke Championships, they built Ron Lechien and Johnny O’Mara Honda-powered ATK copies. Horst was approached by the Bombardier Corporation in 1988 to build a prototype two-stroke to replace its aging fleet of Can-Am offroad bikes (after a brief partnership with the British Armstrong firm had failed), Horst built one of the most unique offroad motorcycles of all time—the ATK 406 two-stroke. This was destined to become the new Can-Am, as the Bombardier factory didn’t want to run a motorcycle assembly line in Canada anymore. Horst had a small cottage factory in Laguna Beach, California, that was capable of producing enough bikes to supply the Can-Am network—as long as Can-Am/Bombardier underwrote the operation. The only requirement was that Horst’s Can-Am prototype had to use the antiquated, air-cooled, 250cc and 406cc, two-stroke Rotax engines. Rotax was owned by Bombardier who saw a chance to get rid of old stock engines. Knowing that the engine was a liability, Horst set out to design a bike so light, simple and unique that no one would notice the engine.

Then it all came crashing down. Can-Am canceled the deal with Horst after the prototypes were already built and elected to get out of the motorcycle business completely. Can-Am’s dealers, aware of the prototype and without a product for their showroom floors, pressured Horst to put the ATK 406 into production. He agreed, but only if the dealers paid for the machines up front. They did! The ATK 406 was financed by Can-Am dealers in 1987. The first ATK 406 two-stroke rolled off the assembly line on November 1, 1987 (six years after the first ATK four-stroke debuted).

For a seven-year period (1989–1995), the combined ATK 604 four-stroke and ATK 406 two-stroke sales made ATK the fifth largest offroad motorcycle company in America. The bikes would stay in production for ten years and be produced in the thousands from Horst’s small Laguna Beach, California, workshop (and later from a factory in Commerce, California). Built under commission from KTM as the “125 of the future,” Horst’s 1990 AMP Research 125 weighed under 190 pounds thanks to its minimalistic chromoly parallax frame design

Then, at the 1989 Milan Motorcycle show in Italy,  KTM’s owners (Git Trust) asked AMP Research to build them a prototype of the 125 two-stroke of the future. The carrot at the end of the stick wasn’t the money that KTM agreed to pay Horst for the one-off machine, but the chance to design future KTM models.

Why was KTM’s management going outside of their own corporation to hire an independent motorcycle designer? After all, they had a bevy of designers and engineers in their employ in Mattighofen. The new investors suspected that KTM’s in-house design staff had failed to deliver stellar products in the past and didn’t want to trust their sizable investment in the company to the same men who had failed to deliver for the old owners. They wanted to bring in a Pro from Dover. They chose Horst Leitner as a way of showing the existing KTM designers that their jobs weren’t safe. The new owners reasoned that outside competition would wake up the Austrian design team. The decision to ask Horst Leitner to design a totally new bike had more to do with bureaucratic politics than a search for creativity. 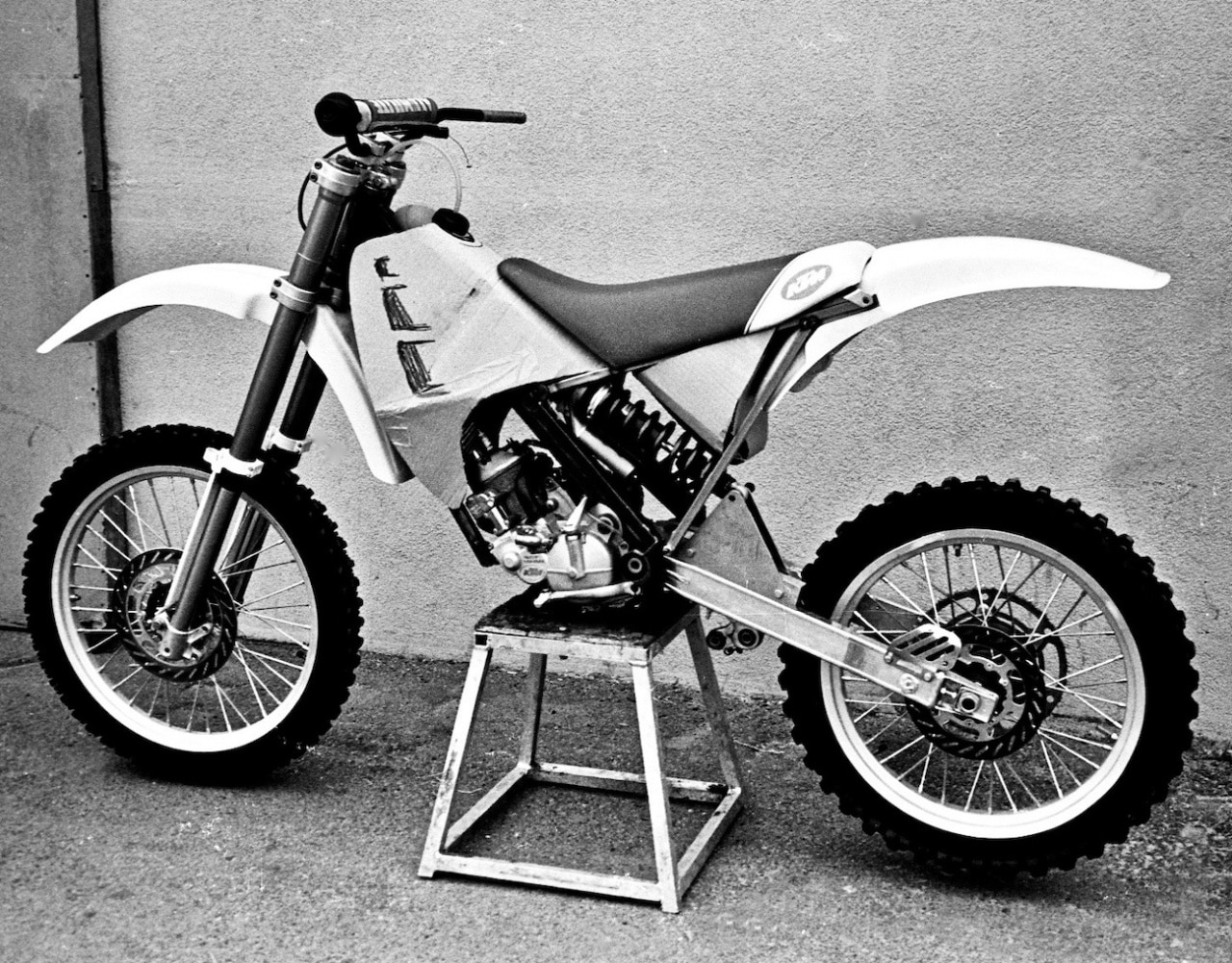 Before the AMP Research 125 KTM project was started, Horst built a full-size mock-up—that included most of the strategic points and cardboard radiator wings.

KTM told Horst that he had to use as many existing KTM components as possible, and that included the forks, wheels, swingarm, brakes, ignition and complete KTM 125 two-stroke engine. These were nonnegotiable parts, but everything else was fair game. And, Horst played fast and loose with the rules as laid out. The AMP Research frame used three chromoly tubes, two rectangular and one round) to comprise 95% of the frame. It used one long radiator on the right side and the pipe went up and under the left side radiator shroud.

When the AMP Research KTM 125 was completed, it was almost space age for the time. It was incredibly small. Not small as in petite, but every aspect of the AMP Research bike was greatly reduced in size. The frame was something that Horst called a “parallax” frame. It was made up of only two main tubes, plus the stock KTM head tube. The two backbone tubes were large-diameter, rectangular, chromoly spars that were straight and true — sans any bends. The KTM 125 engine was used as a true stressed member of the overall layout. There were no down tubes on Horst’s frame, and the footpegs and swingarm pivot mounted to uprights that also served to hold a CNC-machined aluminum bridge that tied the bottom of the frame together. It was simple in design but intricate in terms of engineering savvy. To remove the complete engine from the AMP Research 125, all a mechanic had to do was pull the swingarm pivot bolt and front motor-mount bolts. Gravity took care of the rest. 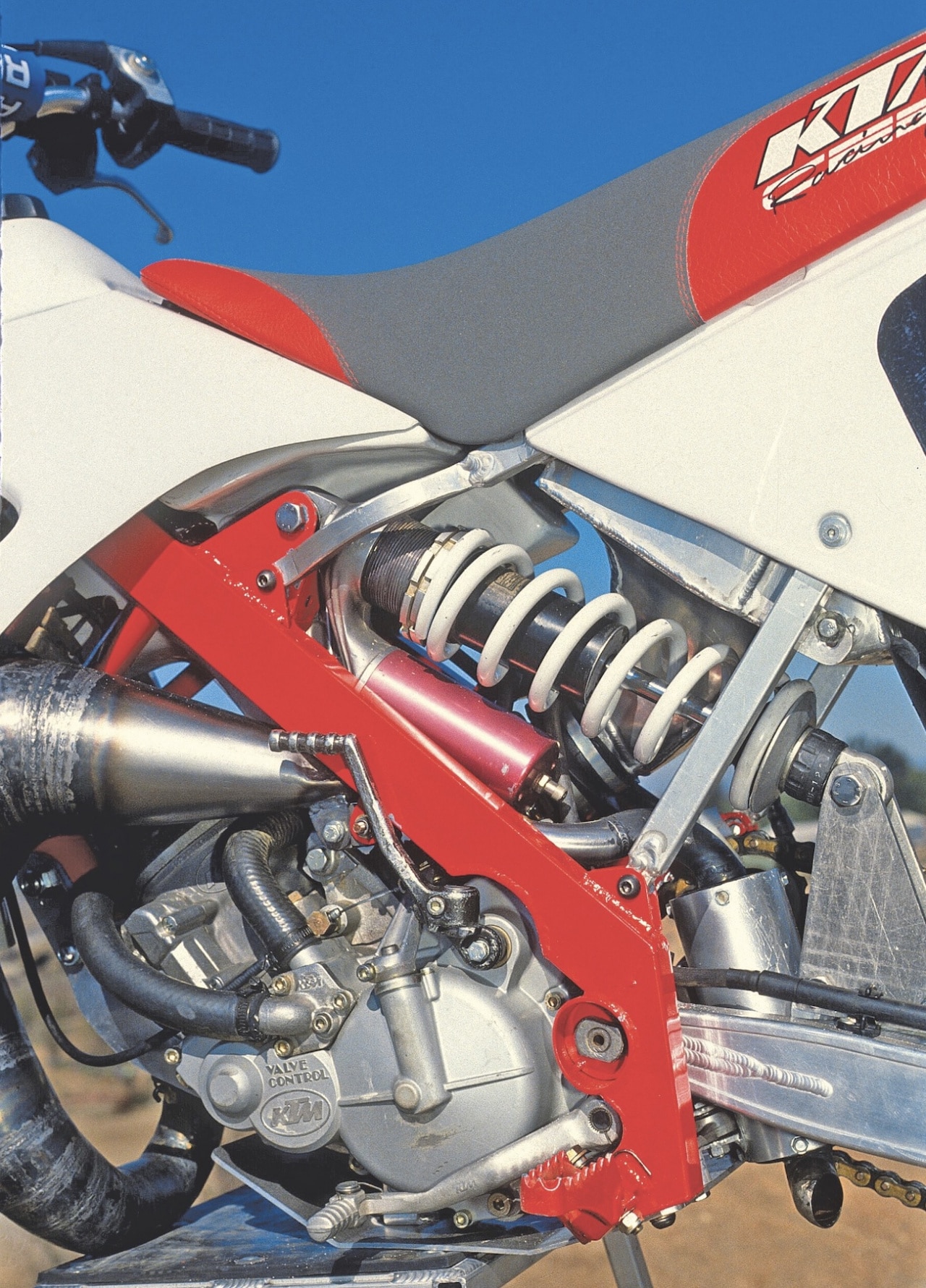 This unique chromoly frame came seven years before the era of twin-spar aluminum frames. Ahead of its time, the parallax frame was the most visible part of the 125 prototype but not the most inventive. It was feather light, extremely narrow and like no other bike made 30 years ago. 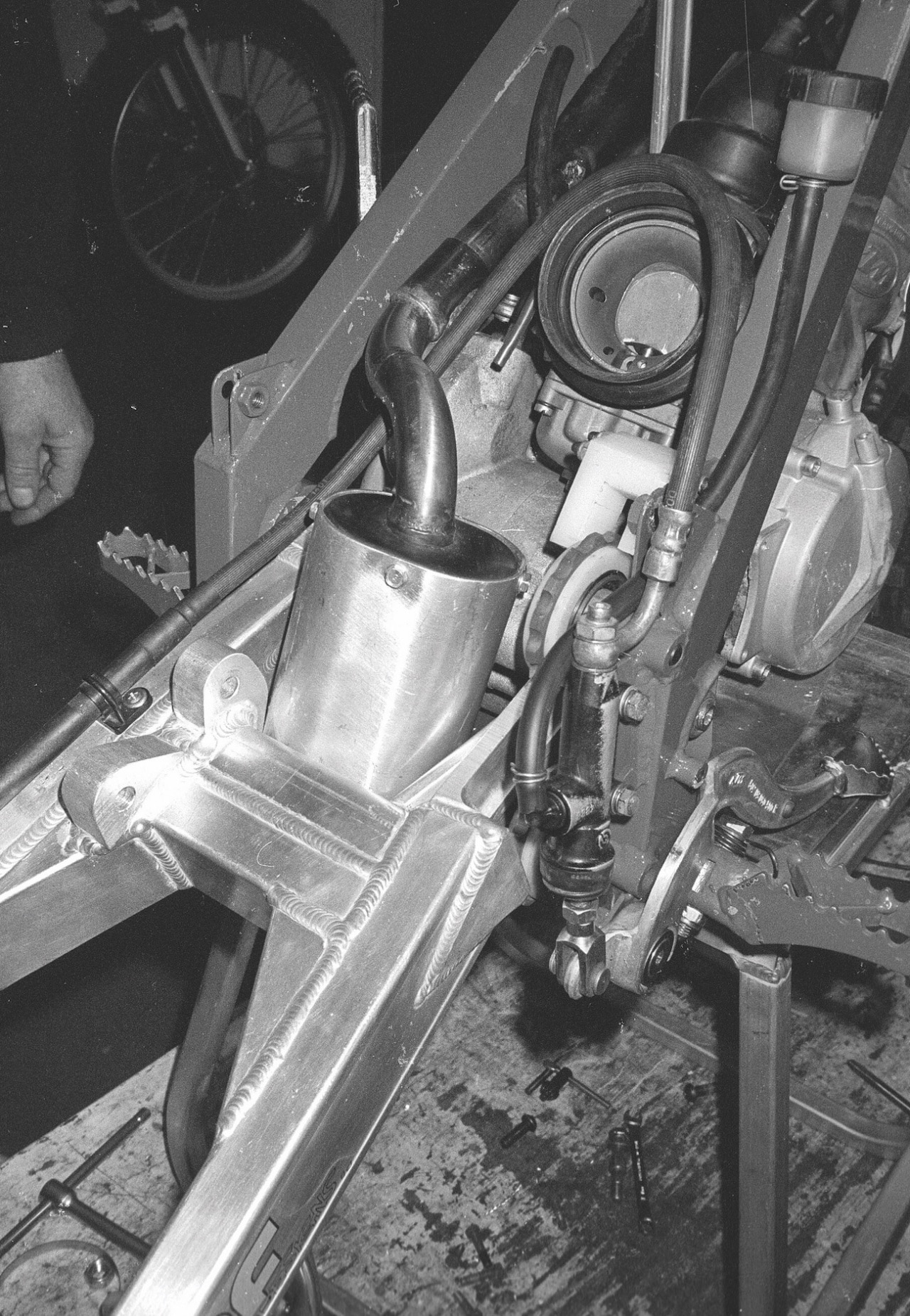 The silencer did not extend out the back of the AMP Research 125, but instead was routed downwards through the swingarm.

The AMP Research KTM 125 was shipped to Austria for testing in 1990. But, it never really stood a chance of going into production. Why not? In one of those catch-22s that can only happen in the corporate world, KTM’s management assigned the in-house design department—the one they were trying to embarrass—to evaluate the prototype. This fail-safe was all the threatened engineers needed to ensure job security. They nitpicked the AMP Research prototype to death and even took the time to photograph every interference fit, crack in the aluminum air box mount and even a head tube crack (even though it was their head tube). In the end, the AMP Research prototype was rolled into a dark warehouse and disappeared forever. Until almost 30 years later. THE BEST OF JODY’S BOX: THE LIFE CYCLE OF STUMPY PHALANGE