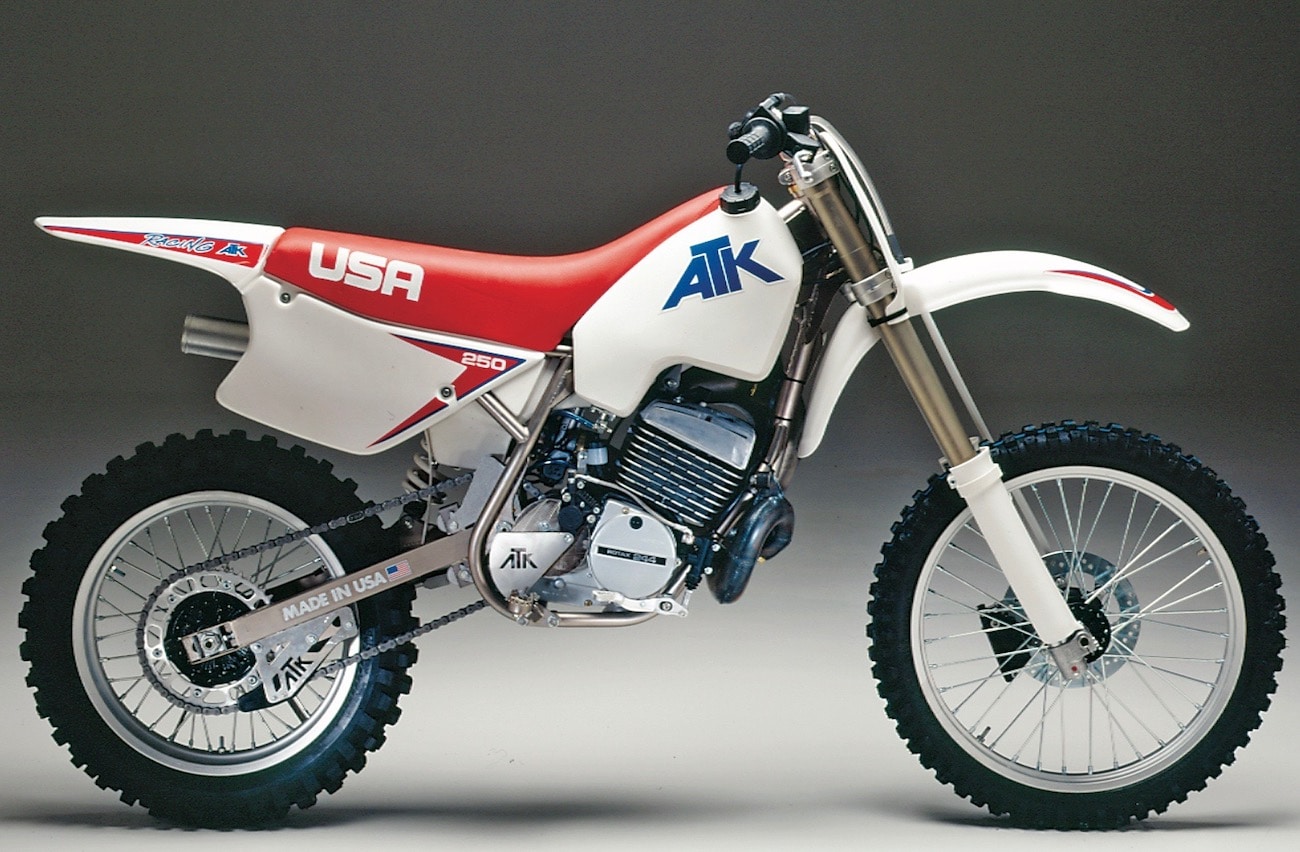 With the rear rotor on the countershaft sprocket, unsprung weight was reduced on the rear wheel. Note that the rear brake pedal pivoted at the front of the frame. Aimed backwards it could not bend in a berm.

Motocross history is filled with examples of creative ideas that were heralded as groundbreaking, but, because of the rapid rate of change in development, sank into the swamp of forgotten technology. Although some are best left abandoned, others were truly innovative (if not ultimately successful). MXA loves to reveal motocross’ tech trivia. Do you remember this idea? ATK’s countershaft rear disc brake?

Horst Leitner was an Austrian engineer who emigrated to the United States and started ATK Motorcycles in 1980. A former GP racer with several ISDT Gold Medals, Horst wanted to build the most innovative motorcycles of the day, and he more than succeeded. Using his Austrian connections, he was able to get Rotax two- and four-stroke engines for his ATK motorcycles‚ which he assembled in the artist community of Laguna Beach, California. His bikes featured airboxes in the gas tanks, no-link single-shock suspension and anti-chain-torque drive systems. His four-stroke came with electric starting. Buyers could choose between the 406 two-stroke and 604 four-stroke. At one time, the ATK was the sixth best selling dirt bike in America.

One of the most unique features on ATKs was the countershaft rear disc brake. To lessen unsprung weight on the rear suspension, Horst removed the rotor, hanger and caliper from the rear of the bike and mounted it on the countershaft sprocket. The brake rotor and the countershaft sprocket spun together. In another enlightened moment, Horst put the rear brake master cylinder on the front frame cradle and installed a backwards-facing brake pedal. The backwards-facing brake pedal could be dragged through berms without being mangled and reduced the length of his braided steel brake lines from 3 feet to 10 inches. The small rotor was prone to overheating, and a guard had to be mounted to keep the rider’s boot from getting chewed up, but most ATK riders figured the reduction in unsprung weight and the uniqueness of the design were worth the drawbacks. Horst entered a three-man ATK team in the 1987 250 USGP at Hollister, California, and was rejected at tech inspection for not having brakes on both wheels (as the FIM rule book called for). Horst, undaunted, went back to the pits and, while leaving the countershaft disc in place, mounted a rear rotor and brake caliper to the back of the bike and breezed through tech inspection the second time. The FIM tech inspector did not notice that Horst had not connected any hydraulic lines to the third brake.

Horst eventually sold his interest in ATK and started AMP Research. He did design projects on cars, trucks mountain bikes—including the bed extender and Specialized FSR, before selling AMP Research in 2013 and retiring.

CONFIRMED! INDIANAPOLIS SUPERCROSS IS CANCELED DUE TO CORONAVIRUS (UPDATED)