Story and photos by John Basher

Wil Hahn, the 2013 AMA 250 East Supercross Champion, called it quits on a professional career that spanned ten years. The likable 26 year old from Kansas was a force to be reckoned with, especially in 250 Supercross. However, injuries plagued the younger Hahn brother, keeping him to just 25 races out of a possible 87 rounds. Wil showed promise on a 450, with a fourth in Atlanta in 2014. The Georgia Dome would also lead to his demise two years later. Buried in the pack during the second 450 Heat, Hahn tangled with Andrew Short and Phil Nicoletti through the first rhythm section. Wil was an innocent bystander in the ordeal, and he walked away with a broken collarbone, torn labrum and broken scapula in the same shoulder. Then he got an infection. After that, he broke his sternum while training on a road bicycle.

Hahn’s two-year deal with Monster Energy Kawasaki having expired at the end of the Nationals, he traveled down to Australia in hopes of logging solid rides to secure something–anything–for 2017. In this troubled time for 450 riders, Hahn’s back was up against the wall. On Saturday, Wil sent out an open letter announcing his retirement. In it he stated, “I am still just as in love with the sport as I was when I was four-years-old, but sadly, my body has taken a beating through the years. The injuries have taken their toll…when I have a family, I want to be able to throw a ball around with my kid!” Wil is smart to think about the future and make a value-based decision, rather than further jeopardize his long-term health.

I’ve known Wil Hahn since he was a moderately successful Amateur. He came into the Pro ranks on the heels of Ryan Dungey, and like Dungey, was a breath of fresh air. Always cordial and funny, Wil was the less intense version of his older brother (another awesome guy), Tommy. Wil bounced from Yamaha to KTM to Troy Lee Designs Honda, Geico Honda and Monster Energy Kawasaki. Through it all–the highs and lows–he remained the same person. The “cool guy” attitude that so often engulfs the stars missed Wil Hahn. That’s because Wil was a human being first, and a racer second. Hahn will continue riding in his second career, as he’ll be working with Geico Honda as a tester. He will also be involved with Geico Honda’s amateur program. Good luck in your future endeavors, Wilbur. Hahn finished 15th at the Lakewood National in 2008. If you’ll remember, it was one of the times that Lakewood was held under the lights at night. 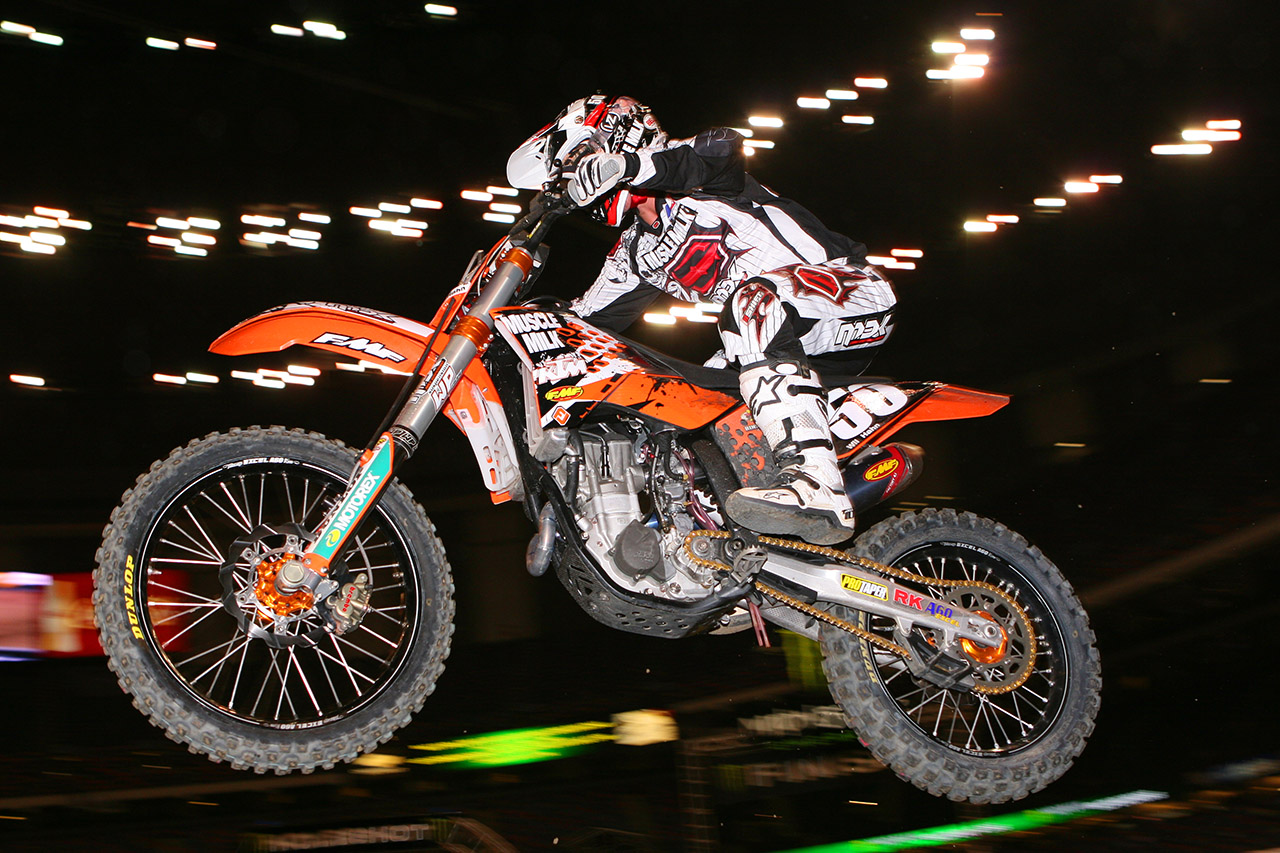 In his second full 250 Supercross season, Hahn finished fifth overall. He was part of the Muscle Milk KTM 250 factory program. Hahn will always be remembered for his Supercross prowess, but he did give it his all outdoors. He scored 12th overall at the High Point National in 2009 (which is where this photo was taken). Wil caught fire in 2010 after moving up to the Troy Lee Designs Honda program. He finished second overall in the 250 West after scoring five podiums. That summer, Wilbur began finding his groove in the 250 Nationals. At Budds Creek, where this photo was shot, he landed in the top five. Injuries kept Wil back from peak performance in 2011, but he returned at the tail end of the 250 Nationals anyway. If you look closely, you can see the #31 of Hahn behind the #387 of Gareth Swanepoel. Hahn’s best National showing came in 2012 as part of the powerhouse Geico Honda team. He was under the same awning as Eli Tomac, Justin Barcia and Justin Bogle. Wil finished sixth overall in the series. Wil Hahn etched his name in the record books in 2013 by winning the 250 East Supercross crown. He barely edged out Marvin Musquin for the title. Here, he styles for the crowd during open practice at the Atlanta opener. A broken hand kept Wil out of action for part of the 2013 AMA 250 Nationals. He raced to 11th in the dust bowl at Utah which, by the looks of this photo, didn’t look that bad. My, how photos can be deceiving. The 2014 season was Hahn’s first in the 450 class. He hovered around 10th place until a nasty crash at St. Louis left him with a broken humerus, clavicle and skull. He was done for the year. After a freak crash on the first lap of practice at Anaheim 1, which left him with multiple fractures, he was back on the gate for the 2015 AMA 450 Nationals. Hahn (48) lasted seven rounds before another injury. That’s Wil’s older brother, Tommy (47), creeping up the inside of Wil during the first Heat at Anaheim 1 this year. It’s great to see that through it all, both have supported one another. The sun has set on the carer of another great racer.