This is the view from the top of Mt. Whitney at Glen Helen. This may look like a gentle slope, but as you will see in the following photos it is anything but gentle. Photo: Jon Ortner Although Jon Ortner missed the start of the crash, when Mitchell Oldenburg slid out after landing on the downside of Mt. Whitney, Jon started shooting after Tristian Higgins (411) and McClellan Hile (505) missed Oldenburg’s fallen bike and Richard Taylor was running up the hill to retrieve his fallen bike. At that exact moment Tallon LaFountaine’s Husqvarna center-punched Oldenburg’s Yamaha. Photo: Jon Ortner In the next shot Richard Taylor runs for his for his life as LaFountain’s Husqvarna comes flipping towards him. As for Tallon LaFountain, he is being eject in the other direction. Worse yet, MXA’s Josh Mosiman (45) has crested the hill and has the brakes locked up immediately, but his KTM 450SXF is still going 30 mph. Photo: Jon Ortner 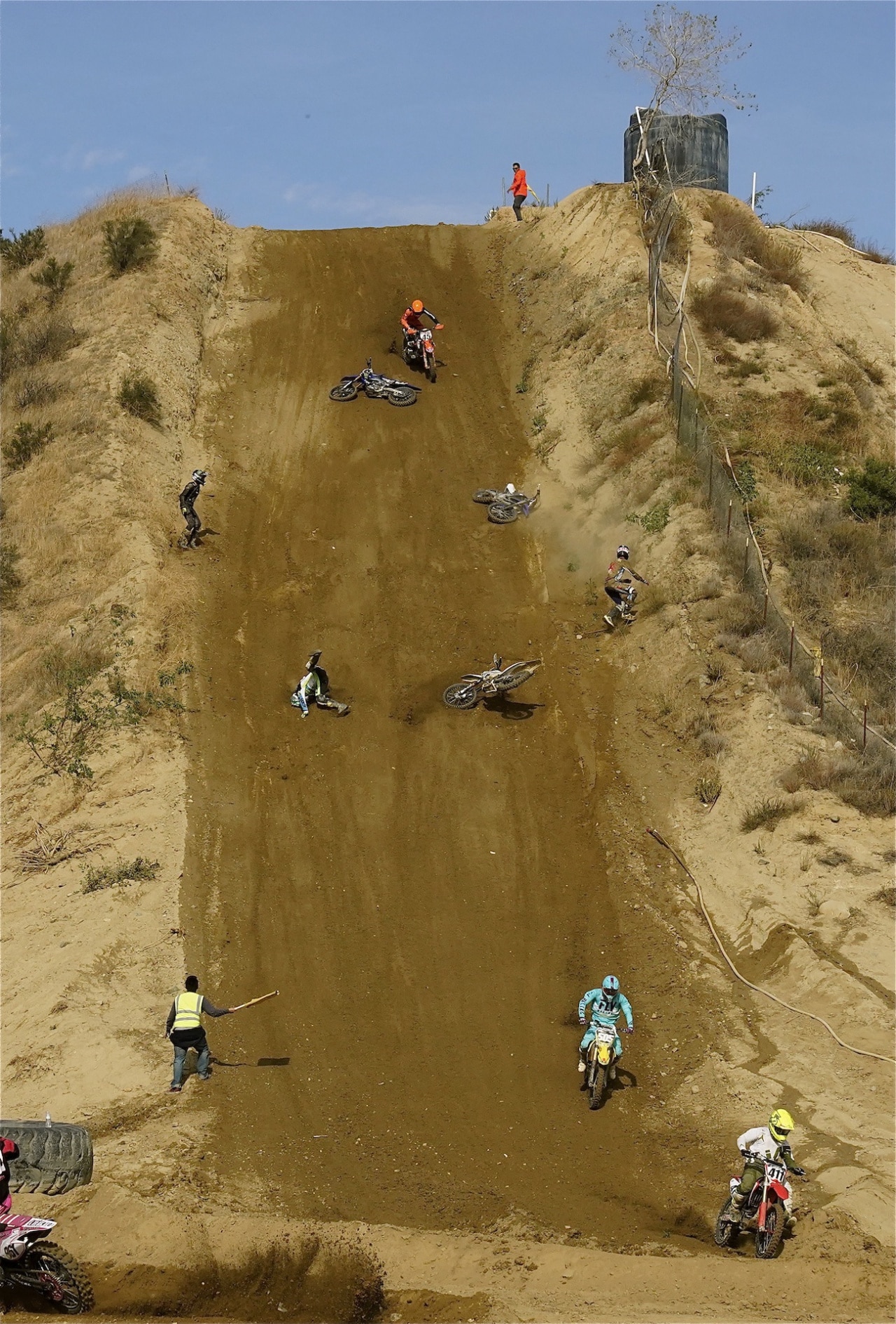 Mosiman swerves around Richard Taylor’s bike as Justin Muscutt (16) comes over the top. Tallon LaFountaine and his Husky are grinding to a halt 60 feet down the hill. Photo: Jon Ortner In this frame, MXA’s Josh Mosiman is skidding to the right to avoid LaFountaine’s now stopped Husky, while MXA’s Justin Muscutt misses Oldenburg’s bike by one inch. Photo: Jon Ortner Unfortunately, Daniel Mills (525) is next over the top of the hill and hits Oldenburg’s YZ450F dead center. Note at the very bottom of the photo that the quick thinking Josh Mosiman (45) has turned hard right to race back up the side of the hill to warn oncoming riders before they crest the blind hill. Photo: Jon Ortner The force of Mills’ Honda hitting Oldenburg’s Yamaha has sent him and his CRF450 cartwheeling down the hill as Mitchell Oldenburg sprints up the hill to warn other riders. Photo: Jon Ortner Oldenburg waves his arms for Zach Randolph (214) as Richard Taylor (far right) makes another attempt to get back to his bike. Meanwhile, Daniel Mills and his CRF450 are doing a high-speed tango. Photo: Jon Ortner After slowing down the oncoming riders, Josh Mosiman rides up the backside of the hill to shake the hand of the flagman for giving him a split-second warning. Josh said seeing the flag for just that brief moment as he flew over the hill was enough time for him to react. All the riders walked away—albeit worse for wear. Photo: Jon Ortner 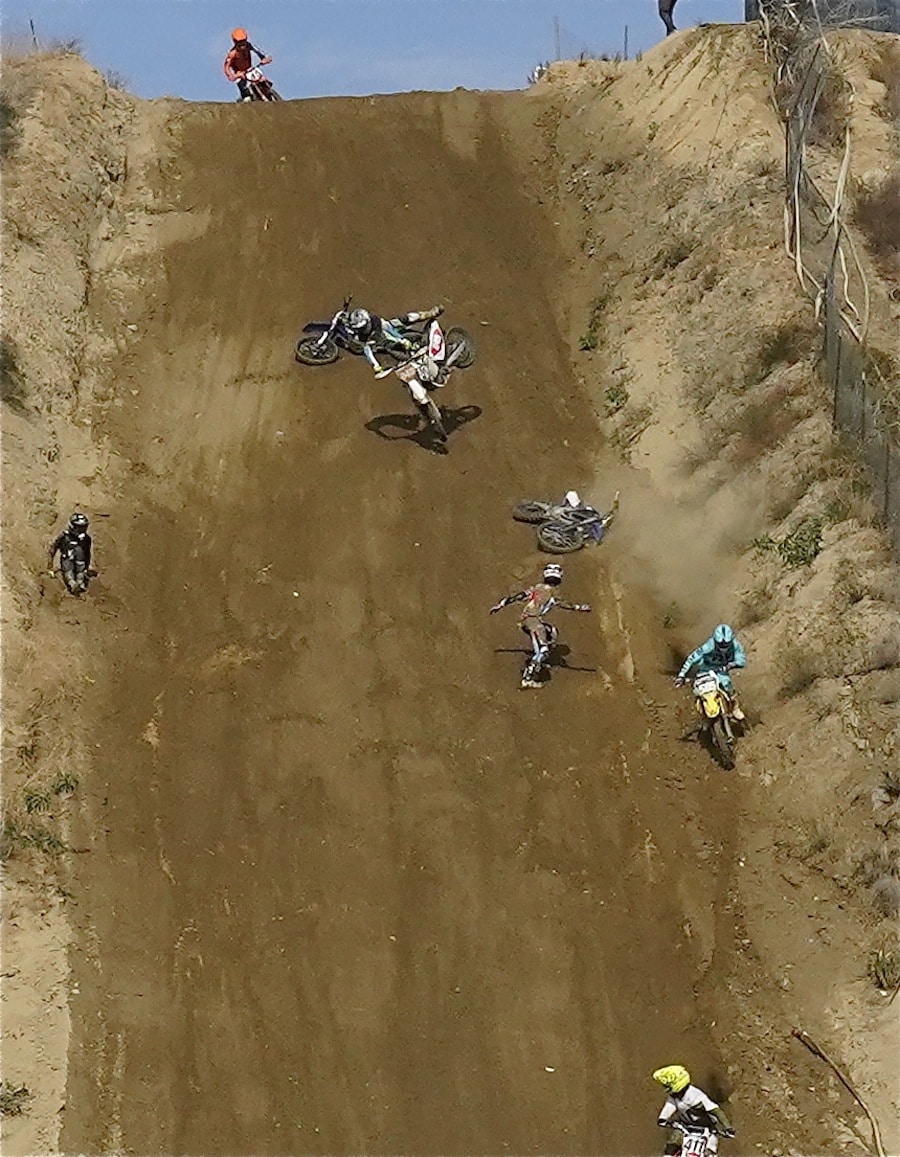 Tallon LaFountaine in mid-air after careening over Mitchell Oldeburg’s YZ450F. Note Tristian Higgins looking back to see if everyone else made it through. They didn’t. Photo: Jon Ortner In the center of the photo, Tallon is being pitched off his bike, while Richard Taylor leaps to avoid being hit by the airborne FC450. Photo: Jon Ortner Tallon and his Husqvarna are both face planting in his photo. Photo: Jon Ortner Near the end of his fall Tallon LaFountaine skips rear-end first into the soft dirt on the side of the track. Photo: Jon Ortner (Click on images to make them larger).

REM GLEN HELEN MOTOCROSS: IT WAS A CASUAL DAY UNTIL A WAR BROKE OUT