GIANT REM RACE REPORT: THE CIRCUS IS IN TOWN 450 Pro winner Erki Kahro (5) swept both motos and even had time to do a little speedway racing while he was on the track. Erki has raced the Motocross des Nations for Estonia. Photo: Debbi Tamietti

There is nothing special about REM’s weekly motocross races—unless you count the fact that they race 40 times a year, that the REM track is the original Arroyo Motocross track (where the first-ever 125 National Championship  was held), that it is the place where most foreign riders come to try their hand at American motocross and that it is run by the amazing Frank and Myra Thomason. Luther French (2) won his first Over-50 Elite race, but to do it he had to hold off first moto winner Jon Ortner (10). One look at the roost that these two are throwing should tell you how hard they were trying.. Photo: Debbi Tamietti

For most of the REM regulars, many from the Saddleback, Indian Dunes and Carlsbad days, it is the only race track in SoCal that races virtually every week. It is tough to emulate the “Saddleback days” at race tracks that either don’t race weekly or don’t have a set group of racers in every class. REM has riders who have raced against each other for decades—and know that next week they will face the same competitors. That gives a feeling of community. REM harks back to the weekly moto wars of the glory days—and is probably the friendliest motocross race you’ll ever find. For MXA the REM races are an important part of the bike testing program because it offers a “dirt dyno,” a consistent race surface with big hills that is incredibly rough. MXA has done enough race laps to tell when a bike works and when it doesn’t on Glen Helen’s decomposed granite. And while MXA rides at all of SoCal’s 10 race tracks—we use the weekly REM races as a proving ground (for the 7 to 10 bikes that MXA races every week in classes from Novice to Pro).

What follow is a photo essay on this week’s REM motocross. Ya shouda been there. Ken Ehlers (103) won the Over-60 Expert class — as Ken and Jody Weisel (92) levitate over a small rise. Photo: Debbi Tamietti Willy Simons, Jr. (246) took the 250 Intermediate class gold in his first time back at REM in quite awhile. Photo: Dan Alamangos Disco Dave Cincotta (861)  powered his way to victory in the Over-40 Interediate class. Photo: Dan Alamangos Mark Hall (52) and Brazilian Enzo Lopes (16) try to match each others styles through this sweeping corner. Lopes would win the 250 Pro class. Photo: Debbi Tamietti Those pesky haybales are always right in the middle of the good line. Swede Kristoffer Palm doesn’t let that stop him, but it did stop his footpeg. Palm was second overall in the 450 Pros. Photo: Dan Alamangos Swede Kasper Siostrom (50) doesn’t have the best view of the track ahead of him. Photo: Dan Alamangos This is probably the greatest race number ever conceived. Chris Micklos, who was an REM regular years ago,  slapped “FUN” on his Honda CR250 two-stroke and came out for some fun after 6 years off his bike. Photo: Debbi Tamietti Don’t let the snow-capped peak in the background fool you — SoCal is in the middle of its typical winter heat wave. Swede Sebastian Sjoblom wasn’t complaining about the weather—since it’s freezing back home. Photo: Debbi Tamietti Tom Hinz (25) took some time off from racing to get married, but he came back to get 3rd in the Over-40 Novice class. Photo: Dan Alamangos Swede Carl-Erik Ovgaard (192) had bike troubles in practice. Jody Weisel lent him his 2016 KTM 450SXF—even though they were in the same race. Photo: Debbi Tamietti You know things are going good when you can plow a deep furrow through a corner with your front tire. Josh Fout (52) demonstrates. Photo: Debbi Tamietti You have to admire companies that put their products to the test on the race track. Here, STI’s Craig Petersen (714) tests his company’s Tech2 MXC motocross tires personally. Photo: Dan Alamangos Australian Dan Almangos was 4th in the Over-50 Expert class with a 4-5 day. Note the WP Cone Valve forks on his CRF450. Photo: Debbi Tamietti REM has a concussion policy. If you suffer a concussion you cannot return to REM for at least a month. Ron Shuler (33) served his term and came back to finish second in the Over-50 Experts. Photo: Debbi Tamietti 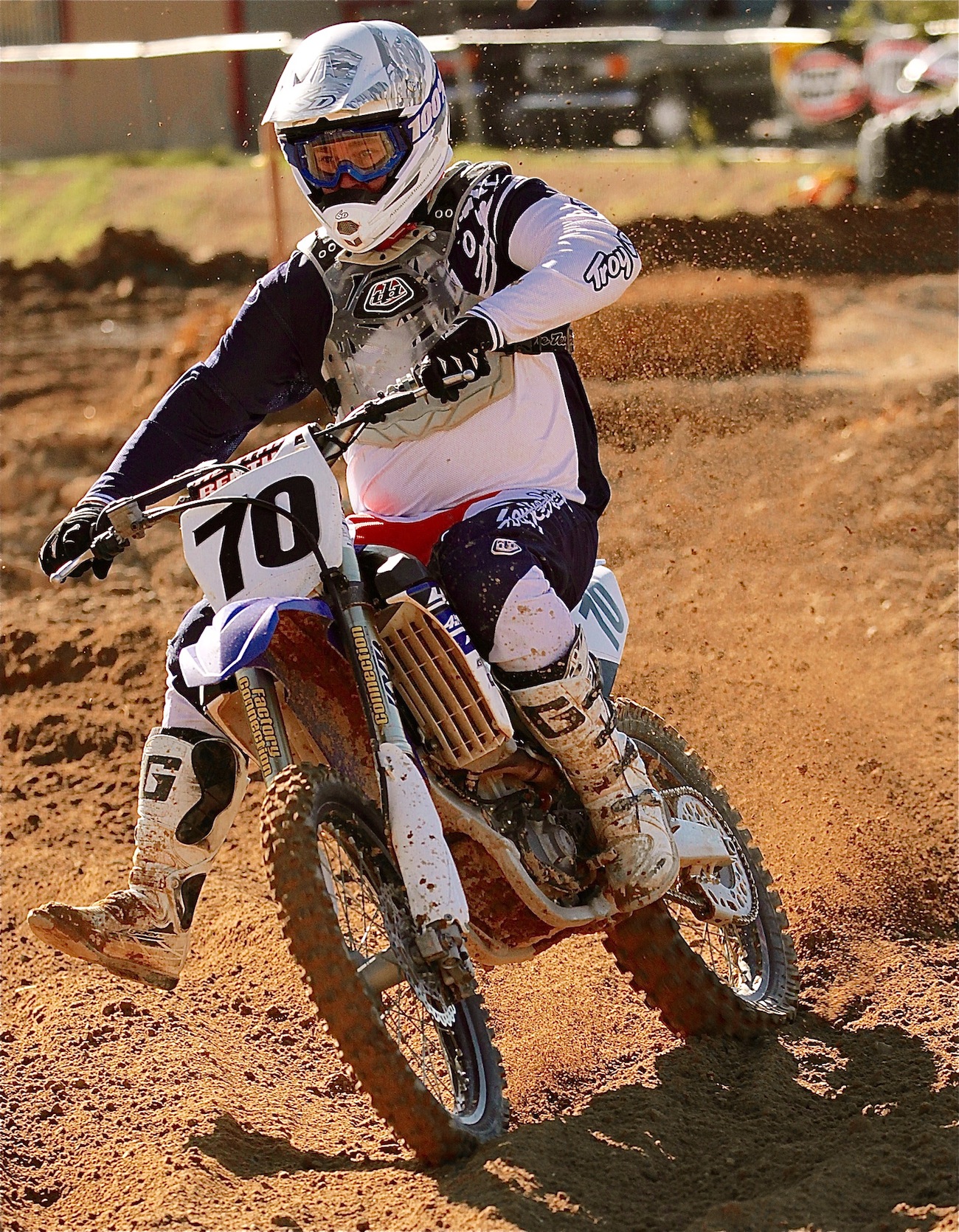 Alan Jullien (70) was also on a forced vacation from his concussion. Alan has recovered fully and won the Over-40 Experts. Photo: Debbi Tamietti Billy Mercier (501)  tracks through the esses on his way to 1st in the Open Vet class and 2nd in the Over-40 Experts. Photo: Dan Alamangos

For more info about REM’s weekly races go to www.remsatmx.com