Kawasaki’s Clement Desalle took his second straight Grand Prix victory with a 3-1 in the Russian mud. Desalle has narrowed the gap to leader Tony Cairoli to 47 points. Jeffrey Herlings went 1-8, but that was still good enough for second overall in Orlyonok. Paulin is one point behind Desalle in the title chase. Gautier Paulin, now on Husqvarna, was third overall in Russia and has taken over third in 450 GP points. Tony Cairoli has a massive lead after the injury to Tim Gajser, so he doesn’t have to risk anything on a muddy day. Tony went 2-9 for 5th, but leads Clement Desalle by 47 points. Former 450 World Champion Romain Febvre struggled in the first moto to 10th, but came back in the second moto for a 2nd. Febvre is 139 points out of the lead after an eartly season injury. Arnaud Tonus won Saturday’s gate pick qualifier in the dry, but finished 7th on Sunday in the wet. Tonus in 10th in points There is nothing like deeply ripped mud and water on the charge to the first turn. Jeremy Seewer won this drag race. With the rain coming down Jeremy Seewer used a 7-1 for second overall in Russia. Brian Bogers is a sand specialist, but he’s pretty good in the mud also. Boger’s 6-2 gave him third overall and moved him into 9th in 250 Grand Prix points after 10 of 19 rounds. 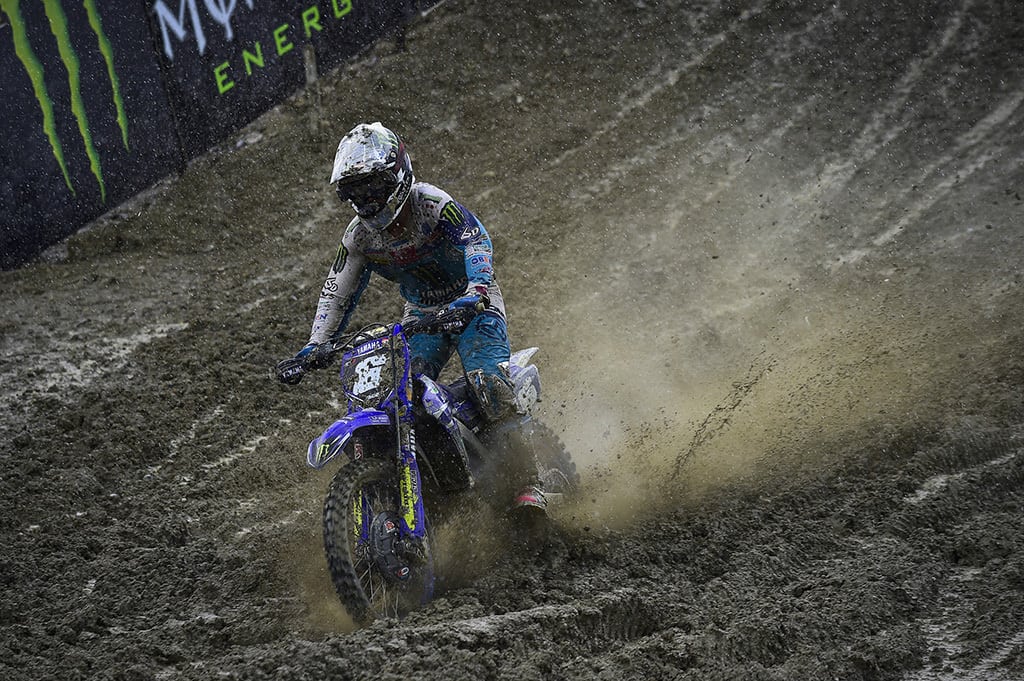 French rider Benoit Paturel (6) Jet Skis through a low spot. Paturel had a 3rd in the first moto, but the mud magnets dragged him back to 12th in moto two. Alvin Ostlund (161) wasn’t bothered by the mud as he was a very consistent 8-6 for 5th overall. A rare sight in Russia was the rider in clean gear. Julien Lieber went 11-5, but is 4th in the 250 World Championships. Thoma Kjer-Olsen has been the hottest new rider on the 250 GP circuit. Olsen won the first moto, but crashed back to 20th in moto two MXA NAGL DOES A 240 WITH A TWIST AT ORLYONOK