Gary Harlow (left) and Dan Hangsleven (right) were the D and G of DG Performance.

We sadly report that Gary Harlow passed away earlier this week. If the name does not ring a bell with you it only means that you were not around motocross in the 1970s when Gary Harlow and Dan Hangsleven founded DG Performance Specialities in 1974. Gary’s son Kevin raced and Gary, who owned a crane company at the time, wanted to help Kevin with his racing. When Gary met Dan at a local Honda dealership they decided to start a race shop together. The 1200 square-foot shop, grew into a powerhouse company and Gary bought out Dan’s half of the company that same year, but kept the “DG” name (which stood for Dan and Gary). 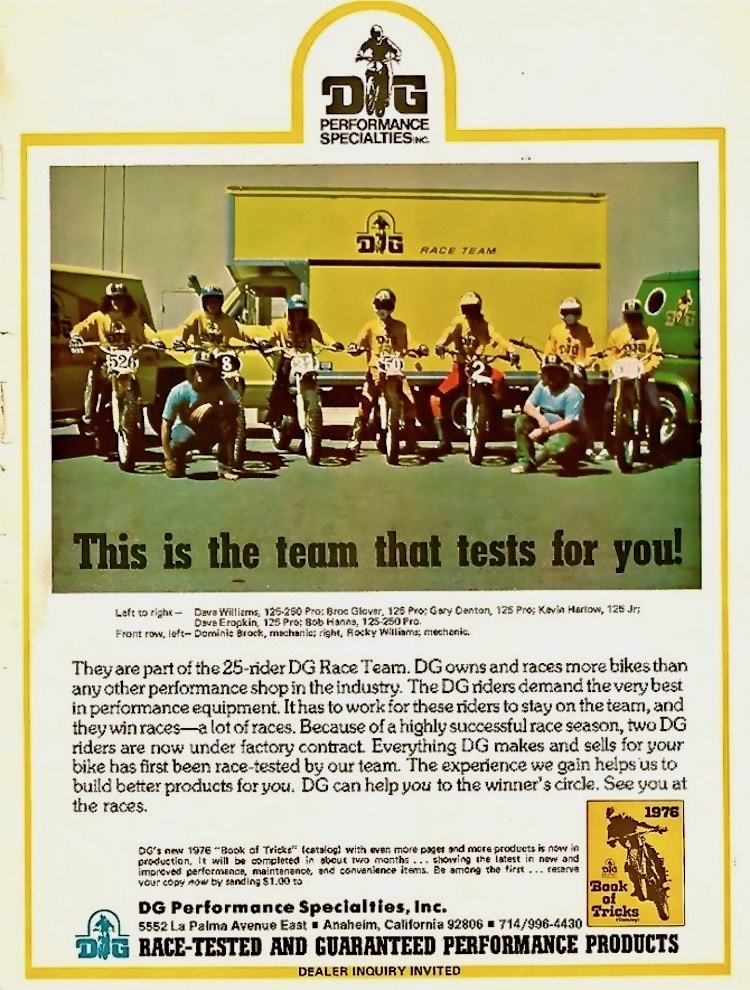 Three things fueled the growth of DG: (1) Back in the 1970s the motorcycle industry was selling 1,000,000 dirt bikes a year. Read that number again. Today’s off-road bike sales are one-tenth of that. Motocross was hot and the famous hop-up companies that we know today, sprung out of SoCal during this rapid period of growth. (2) The Honda CR125 was just coming out and DG specialized in selling hop-up parts for the CR125 including 30mm Mikunis, CR125 airboxes, exhaust pipes, swingarms, radial heads, apparel and BMX bikes. Their prime competitor at the time was FMF. (3) DG decided to start their own race team. But not just any race team. It was big, well funded and full of talented people from the riders to the mechanics. The DG Performance race team included Bob Hannah, Broc Glover, Davey Williams, Mike Bell, David Taylor, Gary Denton and Dave Eropkin, while behind the scene was Harry Klemm, Kenny Boyko, Tim Buck, Rocky Williams and lots of other trusted employees. Many of the DG riders and mechanics moved to factory teams after their time at DG. DG’s team riders were loyal to Gary when they made the big time—and that included Bob Hannah and Mike Bell. Gary sold DG Performance in 1982 and moved to Arizona where he took up real estate and property development. Many people owe a debt of gratitude to Gary Harlow for being the man he was. We need more like him in the sport today.