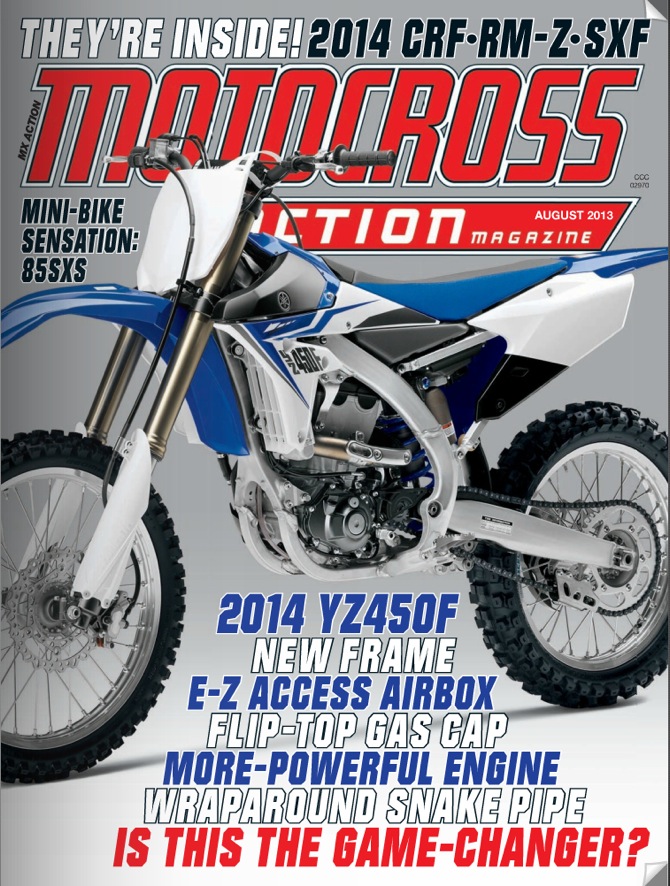 
If you designed and built your own frame, spec’ed the best suspension you could imagine and had a special 190cc engine built ? you could be a Brown Brother.


Phil Nicoletti has been tearing the AMA 450 Nationals up on his N-Fab/TiLube YZ450F ? we just had to test it.


We love John Slater’s creativity, but we didn’t like his Slater EZ sprocket. Plus, we give you ten important tips about cornering. It took a lot of pages to run giant photos of all the 2014 KTM motocross bikes ?no sweat, we gave it to them.


You may not know the difference between a KTM 85SX and an 85SXS, but that’s because you aren’t 13 years old.


We sat down with Troy Lee to have him tell us about his 16 most popular helmet paint designs for everyone from Magoo to McGrath to Henry or Chicken to Glover.


Everybody wants to know how much money the other guy makes ?this story fulfills that desire with the top ten Supercross riders.


Four pages of up-close-and-personal photos of the 2014 Yamaha YZ450F?with all the technical details.

VIDEO: JAMES STEWART’S POST-RACE POST-MORTEM OF WHAT HAPPENED IN SOUTHWICK