HUNTER LAWRENCE ON HIS LAST GP, THE MXDN & MOVING TO AMERICA WHAT’S HAPPENING, HUNTER? DO YOU HAVE A FEW MINUTES? Yeah, sure, I’ve got more than a couple of minutes. I’ve got six hours.

WHERE ARE YOU HEADED? I’m heading out to Kenny Roczen’s old place.

WHERE IS THAT? Well, I’m at Lommel in Belgium and it’s about five and a half hours from here. It’s 550 kilometers east into Germany. They’re on the east side of Germany. That’s where Kenny grew up. There’s a track there and a gym and stuff I once lived there on-and-off for two years. It’s cool. Hunter (96) grabbing the holeshot in Argentina.

YOU PLACED EIGHTH OVERALL AT THE ASSEN GP WITH 6-10. WHAT WENT WRONG?
Dude, honestly, it was the most mentally frustrating weekend of my career. It was just bonehead moves. Honestly, I’ve never been so close and on the speed in sand compared to the KTM and Husqvarna boys. Ever. At Assen I had all the speed in the world. It should have been an overall win for me or at least a second overall in my mind. During the whole weekend, in the pre-practice, timed practice and qualifying, the worst time I got was a fifth and that was in warmup on Saturday. Timed practice I was second. Then, in the qualifying race I just got cleaned out at the start. I’ve seen some pretty cool photos of me being run over. I ended up going from last to ninth. On Sunday in the warmup I was third and was feeling good and wasn’t pushing over my head. In the races I was looking for two starts that I’d been praying for the whole year. In moto one I was second and passed Jorge Prado in the third corner and was leading. When I tried a different line, he got me back. I pushed to get him back and sort of forced myself into making a bit of a mistake. I picked myself up in fourth. Then I tried to pass Thomas Covington. I was faster than him, but I rushed a pass and I ended up crashing again. I ended up sixth in moto one. In the second moto I was really motivated and super-keen to get back out there and not make those mistakes again. I got another awesome start and was right behind Prado in second. From there I just fell over. I had to come from last and, honesty; it was just a nightmare with my bonehead moves. I just embarrassed myself. Hunter Lawrence at the 2017 MXDN at Matterley Basin.

LAST YEAR THE MOTOCROSS DES NATIONS PUT YOU ON THE MAP. READY TO HIT IT AGAIN? Exactly. I can’t wait. It’ll be my first race with the new team, so I want to do well. Being able to represent Australia again awesome. That’s something you dream of as a kid. When you’re a kid you think about how sick it would be to race for your country at the top level of the sport. It’s like a dream come true,.

WERE YOU AT ALL SURPRISED THAT CHAD REED WASN’T PLACED ON THE AUSTRALIAN TEAM? Yeah, for sure. Everyone has their thoughts on that. I think it’s awesome that he still wants to race. At his age he still thinks he’s got it—and he does. Last year at the Motocross des Nations in Matterley, Kurt Gibbs was really good on Saturday and on Sunday in the first moto he was also really good. That was his first Motocross of Nations, so I think from his performance at that event, it was kind of like, ‘Hey, he earned his spot for 2019.’ Okay, he’s had injuries this year, which is kind of a bummer, but I’ve also had injuries. And Mitch Evans, our third guy on the team, stepped up to the 450s this year and has been the only guy to stick it to Dean Ferris in the Australian Championship. As far as Chad and the Motocross of Nations, yeah, there are mixed emotions for everyone. I’m looking forward to watching him race the Monster Cup for JGR the week after the Nations. Best of luck to him. 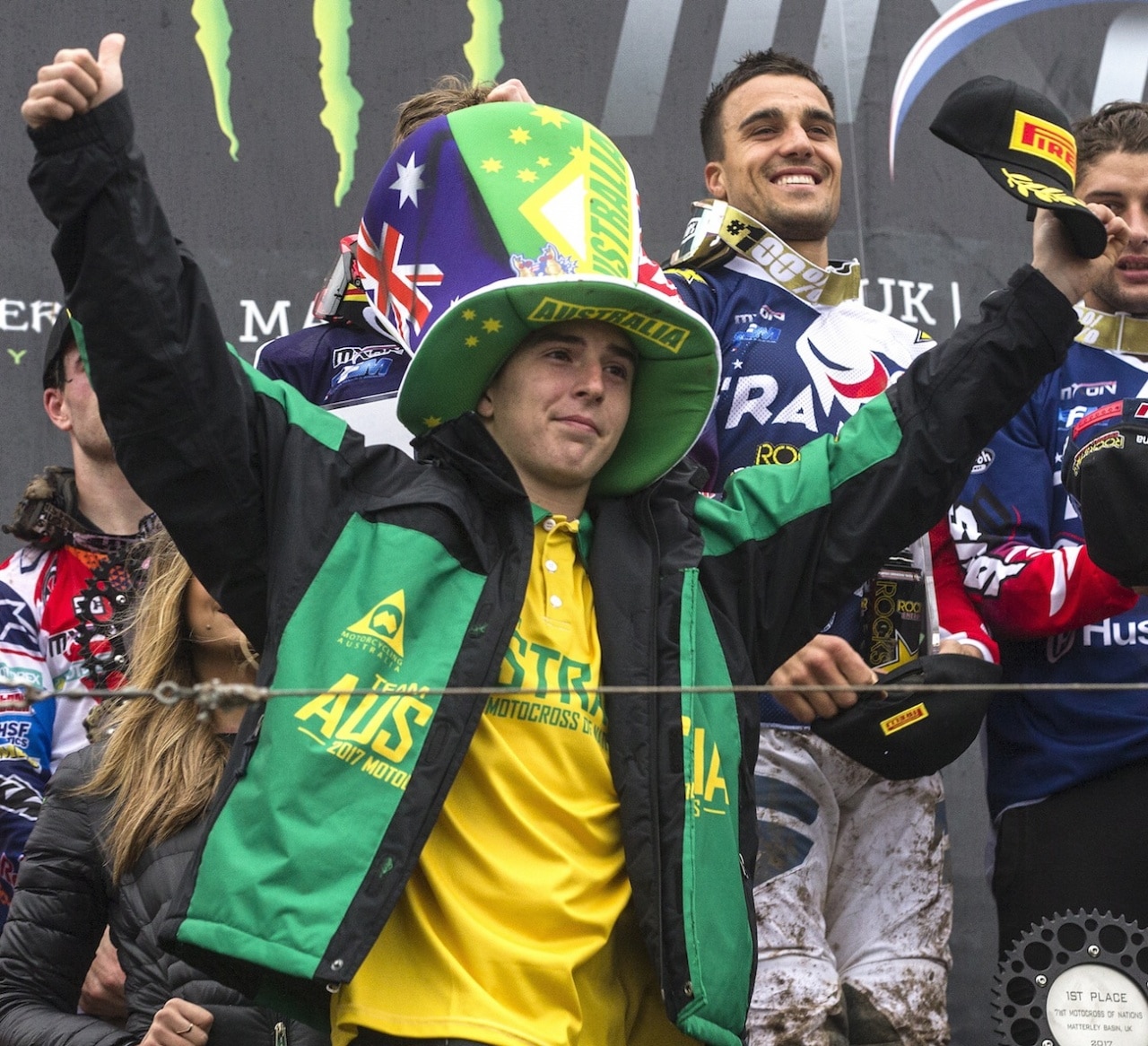 On the podium in green and yellow.

GEICO HONDA TEAM IS READY TO SUPPORT YOUR AT THE RED BUD MXDN? Yeah. My current contract is done on October 1. So it’s going to be my first race with the team so it’s cool. I’m looking forward to it. Everyone there is pretty cool. I’ll bring over my race mechanic from this year who has been killing it. We’ve had no bike failures or any problems. It’ll also give me that confidence to go an work for one of the best teams in the world.

WHAT’S YOUR TAKE ON THE GUYS YOU’LL LINE UP AGAINST IN THE 250 CLASS AT RED BUD? I’m excited to race Plessinger. I’ve been racing all the other guys in the class all year long. The only guy I’ll be racing that I haven’t raced before is AP. I think it’s great that I can race him and just kind of see where I am at before we really get to work. I’m excited to see what the American level is. I want to win. I’m racing for Australia and for myself. HAVE YOU BEEN ABLE TO INVESTIGATE RED BUD AT ALL? Yes, I watched the Red Bud National earlier this year. The team had me come out to Red Bud to get a feel for the track and to just get a feel for the Nationals. The first AMA race that I got to see was pretty awesome. It was a race I watched as a kid while growing up. To finally get to experience it was pretty cool. It’s a good feeling. The track looks really cool and I like how they use the natural landscape.

WHAT IS HUNTER LAWRENCE’S MASTERPLAN FOLLOWING THE MOTOCROSS DES NATIONS? I’m going to be out in the Cali sun and getting a feel for what it’s like out in California. We’re packing up the house in Europe. Yeah, it’s all happening. We’re chucking all of our stuff into a couple of gear bags and moving countries again. I can’t explain how stoked I am. This is what I’ve always wanted and for everything to finally be in motion is just unbelievable.