We all have a longing to return to a happier time, place or machine. This sentimental yearning is easily triggered by a song on the radio, an old movie, family snapshots or the smell of two-stroke oil burning. You don’t have to look very hard to find modern throwbacks like the Ford Mustang, Dodge Challenger and Chevy Camaro. In motocross; the same tug on the heart strings is evidenced by the worship of the Yamaha YZ125/YZ250. There is no time limit on the love between a man and his first two-stroke—and when a two-stroke has been in production since 1974, like the YZ125/YZ250, it has a devoted congregation hoping to pay homage to the past with their own Yamaha project bikes.

MXA has never given up on two-strokes, unlike Honda, Kawasaki and Suzuki. This a photo essay of our favorite Yamaha two-stroke project bikes. There was a time in American motocross when 100cc motocross bikes were an integral part of the motorcycle marketplace. Considered “keystone bikes,” the 100cc Hodaka Super Rats, Yamaha YZ100s, Suzuki RM100s and sleeved-down Honda CR125s were inexpensive entry points into the sport, priced from $500 to $1000, so the racetracks were filled with 100cc bikes for everything from Novice to Pro classes. Today, the last bastion of 100cc motocross bikes are special events like the “Marty Tripes 100cc Works Revenge Series.” The rules of the past were simple—100cc engine, air cooled only, and 1983-or-older frame (although, it was legal to make your own frame or modify a stocker). Australian motocross racer Dan Alamangos saw a forlorn-looking 1979 YZ125 in the back corner of Jody’s barn. It had been sitting for 43 years. Dan asked Jody if he could restore it. Jody said, “If you restore it, you can have it.” Dan had never restored a vintage bike before, but he knew a lot of high-end motorcycle collectors who could advise him. The list included RC Classics’ Rick Karo, his brother Chris Alamangos (who owned Houston-based Vintage Works MX), and restoration expert Jay Clark. When Dan rolled the bike out into the sun, he was shocked to see that it was suspended by ultra-rare Rich Thorwaldson-designed Thorks leading-link forks and an equally rare Fox Factory YZ125 Airshox. Back at Dan’s workshop, he disassembled the 1979 Yamaha YZ125 down to the frame. He vapor-blasted as many parts as possible, vacuumed the mouse droppings out of the airbox, and spent hours on the phone tracking down New-Old-Stock (NOS) parts or hours in the shop refurbishing the 43-year-old stock parts. He even had Vintage Roost custom make him a seat cover (after the two he ordered from a reputable vintage parts supplier didn’t fit). He sent the Fox Airshox to his brother in Houston to have it rebuilt. Eight weeks later, he rolled it back into the sun—and went to Glen Helen and rode it. The complete Yamaha GYTR YZ125 kit comes with an adjustable combustion-chamber cylinder head, ported cylinder, special power valves, high-performance ECU, stiffer clutch springs, carbon fiber ignition cover, VForce reed assembly, increased inertia magneto rotor, GYTR pipe and silencer, and a spare one-off piston. This is the engine package that Yamaha’s sponsored riders use in the EMX 125 series in Europe; however, the GYTR kit is not sold in the USA, and our contacts at Yamaha said they couldn’t get one. Thankfully, MXA knew a guy who worked in the Dutch GYTR warehouse. Voila! A GYTR YZ125 landed on our doorstep. We had Pro Circuit mechanic Mike “Schnikey” Tomlin put it on our 2020 YZ125. The GYTR kit worked great, but the GYTR pipe did not. Schnikey replaced the Euro GYTR pipe with a Pro Circuit YZ125 pipe that increased over-rev significantly. To complete the package, we installed ODI KTM-bend bars, a high-pressure CV4 radiator cap, Decal Works graphics, a Twin Air filter and Maxima fluids. But, the kicker was that we ran WP Cone Valve forks and a WP shock. It may seem like blasphemy to take off Kayaba SSS suspension, but the WP Cone Valve spring forks were better. The personal bike of a factory star’s mechanic is often a hidden gem. Take Jon “Throttle” Mitcheff’s 2013 YZ250. He had wrenched for Stephane Roncada, Ivan Tedesco and Ryan Villopoto. Since Jon worked at Pro Circuit, he was able to scrounge around upstairs, where he found a titanium bolt kit, works Showa forks and Chad Reed’s old carbon/titanium YZ250 silencer. He asked Mitch Payton about them, and Mitch said, “They’re yours.” The trickest parts on Jon’s YZ250 build were an Italian-built CRM carbon fiber gas tank and ignition cover. The rest of the build included Duyba-built wheels, updated R-Tech plastic, a Works Connection clutch perch mated to a handmade ARC lever, Kite triple clamps, Pro Circuit pipe, an EBC 280mm oversized front rotor and a Pro Circuit clutch cover. Jon could have asked Mitch to build him a 2005 Chad Reed replica engine, but Jon was smart enough to have Mitch port the cylinder and mill the head to Pro Circuit’s customer spec. Jon’s engine was nothing like Chad’s, even though Jon had the trick silencer. It ran with the same curve as the stock powerband, but with the dips filled in and the power raised significantly throughout the entire rpm range. MXA editors don’t own motocross bikes. It would make no sense. MXA has one of every new model bike in its warehouse, and when a manufacturer introduces the next year’s model, we trade the old in for the new. Pity the poor editor who pours his heart and soul into building the ultimate YZ125 only to have to tear it down before it goes back to Yamaha in exchange for next year’s bike. John Basher decided to end the roller coaster by buying a used 2005 YZ125 for $1350. In 2005, Yamaha unveiled an all-new YZ125 platform with a twin-spar aluminum frame and new engine. Unfortunately, the 2005 model came with less than stellar Kayaba AOSS forks. John got a set of works Kayaba PSF-1 A-Kit air forks and a shock that Cooper Webb and Jeremy Martin ran in 2016. 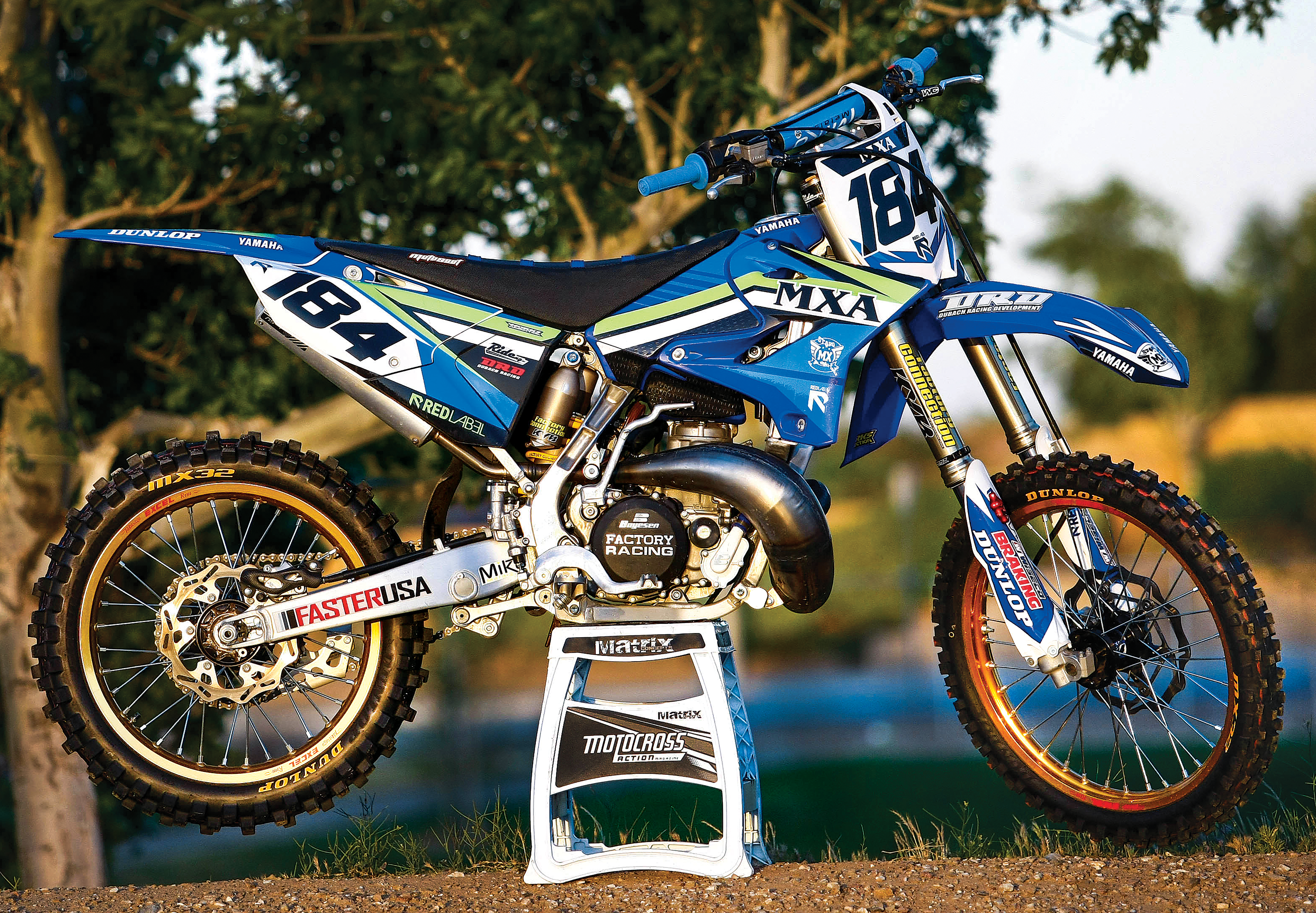 Back in 2015, MXA handed Dennis Stapleton a brand-new YZ250 and said, “Build it anyway you want.” The first surprise was that Dennis decided to leave the cylinder and head alone, limiting his mods to a Boyesen RAD valve, Boysen Power X-Wing and DR.D pipe and silencer. Dennis loved the stock Kayaba SSS suspension, but sent it to Factory Connection to have them re-valve the forks and install a stiffer shock spring. When he got the forks back, he installed them in Ride Engineering 22mm offset triple clamps with a Showa steering stabilizer and one-piece bar mounts. Not a fan of the YZ250 front brake, Dennis ran Braking 270mm rotor and mounted it to a set of FasterUSA wheels laced with throw-back gold rims. The stock gas-cap threads were destroyed in a crash, so Dennis had Bionix fabricate an aluminum insert and CNC-machined gas cap that fit flush on the tank, like the Grand Prix teams use. The graphics were designed by Red Label, and the blue main body was spiced up with green and white stripes. The design worked well with the blue Mika grips and crossbar pad. John Perry had never owned a 125 two-stroke, as he went straight from a Hodaka Super Rat 100 to a 1977 Suzuki RM250. Over the years he eventually raced a series of 250 two-strokes before settling on racing a Honda CRF450. Then, the 125 two-stroke bug bit him. He looked for a used YZ125 to build as a project bike. Affordable ones were hard to find, but he found a 2005 YZ125 on Craigslist for $1000 and drove from Colorado to New Mexico and bought it. Surprise! It started on the first kick. His next step was his smartest one. He called MXA’s Dennis Stapleton to get some advice. Dennis said, “Give it to me and I’ll rebuild it for you as an MXA project bike.” John agreed but had two requests—he didn’t want a big bore, and he wanted the plastic to be grey and black. The Open Pro class at the World Two-Stroke Championship is the premier race of the day, and it has been won by 300cc or 325cc big-bores several times in the last five years, so Twisted Development’s Jamie Ellis decided to give Josh Grant the extra cubic centimeters for the 2021 Championship. Jamie started with an Athena 300cc kit, checked the port timing, milled the head, and added a thicker base gasket to get the compression and squish where he wanted it. Twisted tested a multitude of carbs before deciding on a Lectron; although for their YZ125, Twisted didn’t use a Lectron. The 2006 Yamaha YZ125s and YZ250s were the first to get the great Kayaba SSS forks; however, Jamie put a set of JBI Suspension-valved Yamaha YZ250F forks on Grant’s race bike. He had to custom machine the YZ250 steering stem for the YZ250F clamps, plus Jamie had to use a YZ250F front wheel because it had the bigger axle. JBI ended up with 0.47 N/m fork springs and a 5.4 N/m spring on the shock. Unfortunately, Josh Grant got hurt in practice, but Robbie Wageman filled in for him and won the 2021 World crown. The Pasha 125 Open, World Two-Stroke and Vet World classes allow riders to race with displacements up to 150cc. Mike Alessi had spent the pre-season building a hot-rod YZ125, but when he found out that almost everyone else would be on a 150, he asked XPR Motorsports’ Chad Braun to build him a YZ150. Chad felt that a Yamaha YZ150 would give up too much top end and suggested they build a 134cc instead. The crank and the cases were built by DVS Racingworks, while Mike used a DEP pipe and silencer and a full Rekluse TorqDrive clutch. The carb and ECU were left stock. For fuel, Mike ran VP MRX02 cut with VP C15 via VForce4 reeds. Alessi’s YZ134 made 42.0 horsepower on the XPR dyno. Mike ran an ultra-trick CRM carbon fiber fuel tank with a flush gas cap, and, even cooler, was the full carbon fiber CRM subframe, which had more air volume than stock to help the engine breathe. Mike used stock KYB components with Race Tech valving, a front brake master cylinder from a 2005 Honda CRF450, and an oversized 280mm MotoStuff rotor. Mike went on to win the 30+ 125 Open class and claimed $1000 from Pasha, plus his bonuses.

BEST OF JODY’S BOX: SCARS ARE RED BADGES OF STUPIDITY