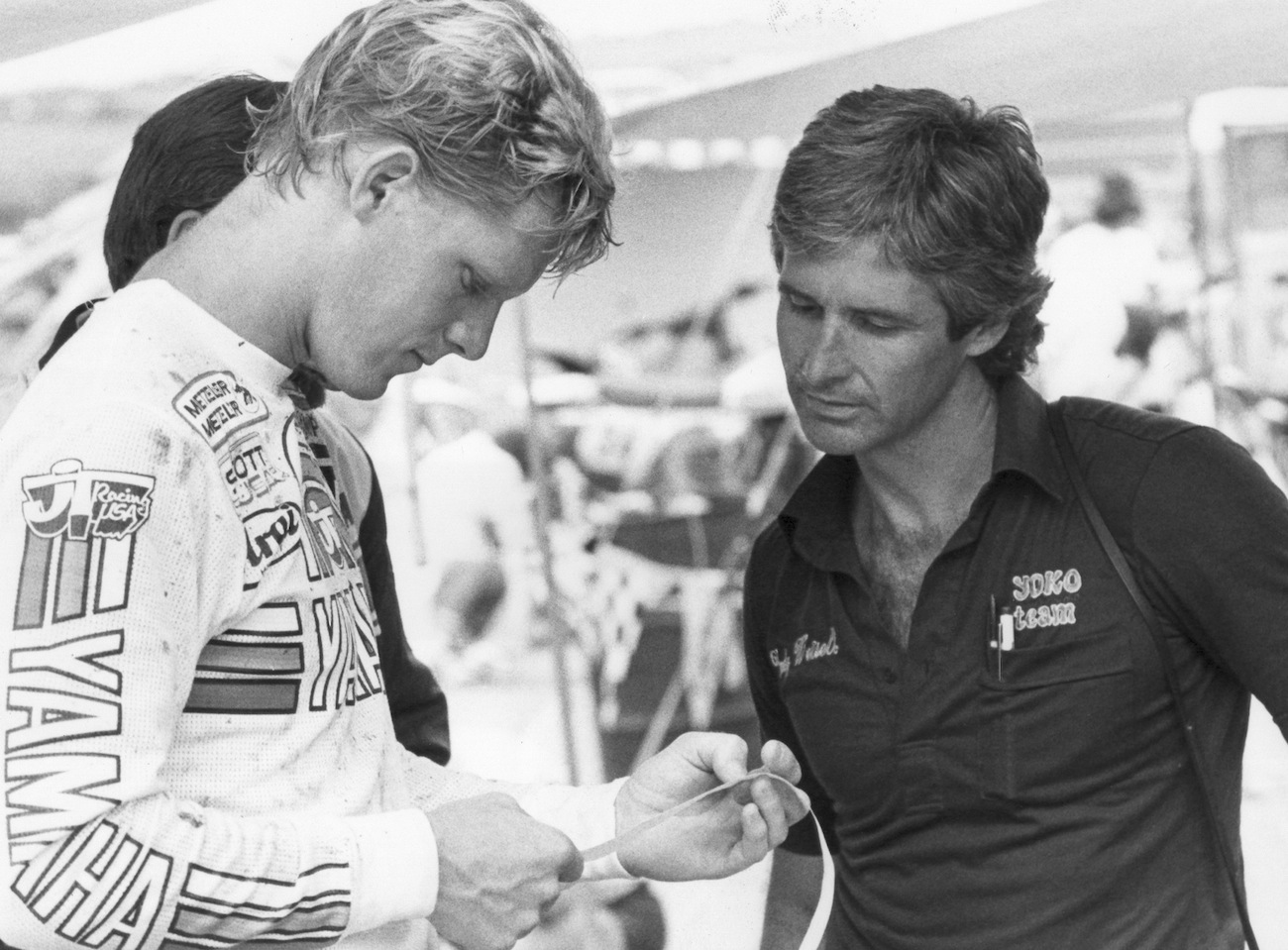 Broc with his idol.

I must admit that I don’t aspire to greatness. I’m not attracted to it in others nor driven to achieve it for myself. Not that I don’t appreciate it when I see it or am not proud of myself when I show a glimmer of it. But I believe that the unseen rigors of fame, fortune and glory take away most of what’s worth living for. Fame is fleeting, often awarded to the most unworthy people on the planet, and not grounded in any reality other than that of a subculture that can focus narrowly enough to overlooked virtually every other human trait. Preston Petty thanks Jody for telling him about plastic.

My lack of greatness does not eliminate me from discussing it. I am eminently qualified to discuss the social mores, values and dynamics of small group interaction since I spent nine years in college working on my Bachelors, Masters and Ph.D. If you don’t believe me, you can read my seminal work, “The Cosmopolitan-Local Orientation of Aged Blacks And Whites” at your local library. That book alone prepared me to look into the social strata of motocross in ways no other scholarly pursuit could have.

I strongly believe that fame, greatness and heroism are often confused. The Shu ain’t scared as long as Jody is by his side.

Hollywood movie stars wish for fame, prostitute themselves on the altar of celluloid to get it and then curse the paparazzi once they arrive at the pinnacle of flashbulb hero worship. They aren’t heroes. They are actors. Think about that for a moment. How many of us envied the nerds who went out for drama, glee club and tap dancing in high school? It’s amazing what a few klieg lights and screenwriters can do for a thespian’s social status. Jody advises Gene Hackman on his next movie script.

Motocross has more than its fair share of heroes and hero worshippers. The heroes are self explanatory. They can do something — maybe only one thing — better than 99.99 percent of the population. What makes sports stars worthy of adulation is that they can do what most mortal men can’t. In the NBA, that is slam dunking. In West Virginia, it’s hog calling. In motocross, it’s triples. They are heroes in the same way that WWI aces were heroes — they live on the edge that the rest of us cringe away from. To other racers, regardless of their skill level, these men are worthy of admiration. There is a brotherhood among those who go to war on Sunday. A racer appreciates greatness when he sees it. And of course, famous people, great athletes and those who display heroism attract “true believers.” Some call them fans, but that only applies to those who keep their distance. In reality, there are camp followers that are attracted to the aroma of fame. They are typically called hero worshippers. There are several kinds of hero worshippers in the sport of motocross (and as a social researcher I am not making value judgments about whether being a hero worshipper is good or bad, only that it exists). These posers and hangers-on don’t necessarily attach themselves to a star out of appreciation for a job well done, but mainly to glom onto any excess fame in a world rife with excessive fame. Posers don’t race. Posers pose. They look good. They live to look good. They come in several varieties. 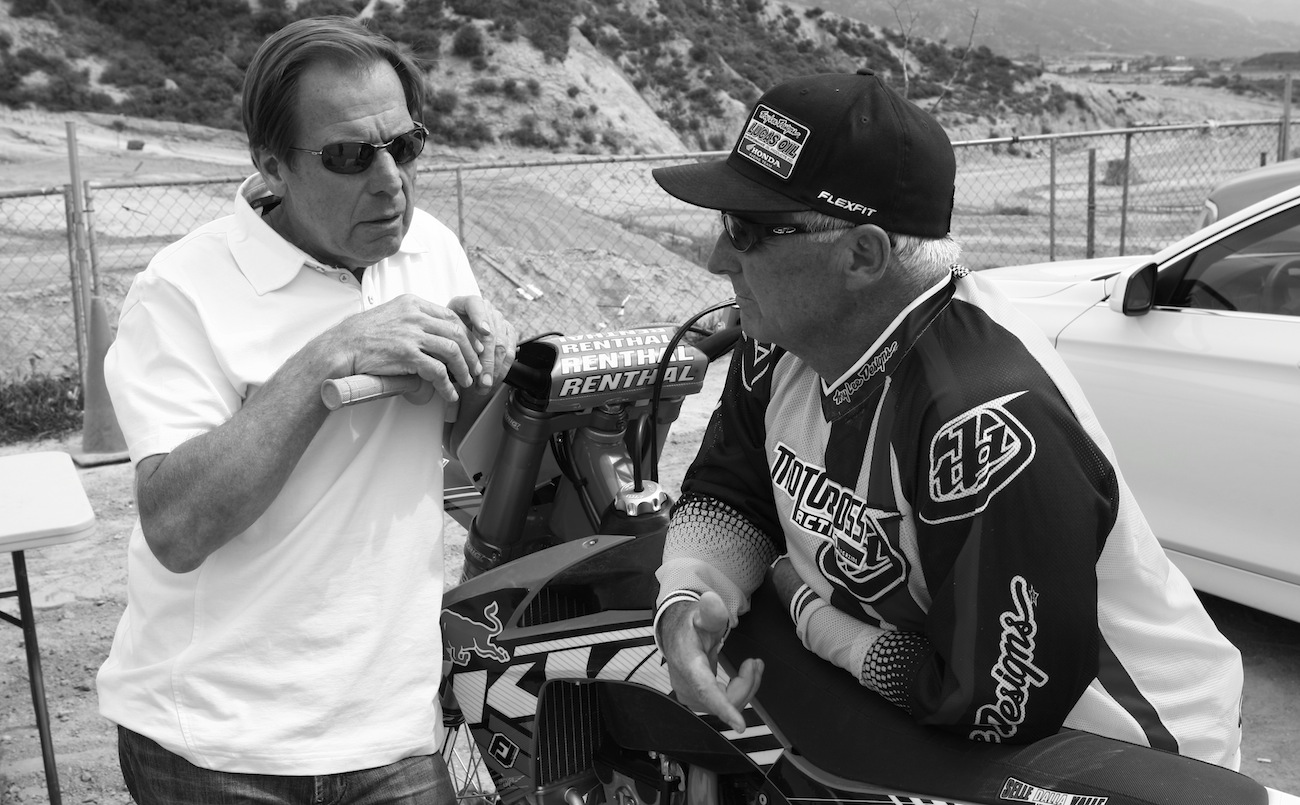 “Rog, I’m telling you, these Austrians are on to something.”

PROFESSIONAL PRACTICE RIDERS: The purest of the posers are the professional practice riders. Not the hardworking guys who ride their bikes for enjoyment at their local track, but instead those that want to be mistaken for hardcore racers — without going to the starting line. They have neat bikes, new clothes and big trucks, but you never see them at the weekly moto wars. They are too busy practicing. They like to practice. They always pass up a race to go practice. Practicing affords them the opportunity to master the sport without engaging in any of the ugliness of competition. Once or twice a year the professional practicers show up at big races, but only at races that provide them with an opportunity to be seen (decked out in the hottest new gear) standing next to their heroes. When word gets out that Jeremy McGrath is going to race a local REM race at Glen Helen, the professional practicers show up in droves to be part of the scene. They fade after three laps, but that’s not because they aren’t fast, but because professional practicers only practice for three laps at a time. HANGERS-ON: Hangers-on are the best known kind of posers. Every hero has his minion of hangers-on. They are easy to spot. They look like factory riders (factory riders on a day off). They have the uniform. You’ve seen it: a sprout of facial hair growing from the most unlikely spot; a flaming skull tattoo positioned slightly askew on their left arm; one of those silver-bead necklaces that went out of fashion ten years ago; a conversational pattern that is littered with dropped names (never the rider’s real name but insider nicknames like Monkeyman, Squidgy and Pooh-bear); bleached hair (unless they are blonde, then it’s dyed black); a $597 embroidered leather jacket (regardless of the temperature), a beanie that seems oddly inappropriate on a 90-degree day and a close proximity to the wake of whatever hero they aspire to steal the soul of. They don’t race, but tried it once. They prefer to party with or provide parties for racers, but typically end up hosting parties for other hangers-on. Gary Jones wearing a T-shirt that Jody bought for him.

RELATIVES: Saddest of all are the relatives of heroes. They ride the coattails of brother, son or dad. They take on the pitiful and predictable role of Svengali to the hero (although the other riders make fun of their advice), chronicler of the fame of the family name (always on hand with a video cam), the footstep follower (hoping the racing talent is in the genes) or the infamous father/mentor/mechanic (unfortunately, they always seem to come up short in one of the three jobs). Mark Blackwell and Jody stare down a local gopher.

MANFRIENDS: Last, but not least, is the ubiquitous gopher. The manfriend accidentally got so close that somehow he got roped into actually working. These manfriends serve a function. They are Kato to the MX version of the Green Hornet. The gopher is the closest friend that a hero has, but he lives life by the moment. He travels, eats and hobnobs at the whim of his master. Should Joe Hero get fired, lose once too often or get injured, Renfield will be left out in the cold (warmed only by memories of lugging someone else’s gear bag through LAX).

I’ve seen the motocross social circus played out many times during my racing career. New heroes rise, with little fanfare at first, but eventually developing bloated entourages befitting their talent. Then, in time, as though none of the posers ever cursed their shadow, the rider returns to virtual anonymity, deserted by fans, foes and friends alike. New posers rally around the next new hero, all the while being berated by the last generation of hangers-on for their crassness, obviousness and lack of purity. Every hero and his worshippers (minions, vixens and posses) claim to be part of the “new” generation, while being totally unaware that they are a small part of a continuum that is very adept at flushing last year’s hero through the spin cycle like so much effluvia. Jody advise the Hurricane on the proper way to wear sunglasses.

Luckily, I’m not much of a hanger-on. In truth, I’m more of a walker-away. You won’t find me playing handmaiden to a motocross star. And, if you don’t believe me, just ask my good buddies ET3, Versace, CR22, El Hombre, K-Roc, JG33, AP and AC.