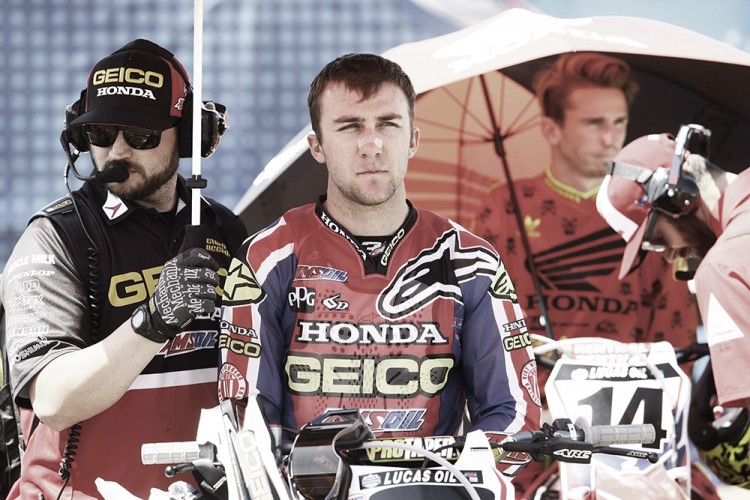 Eli Tomac was a man on fire at the start of the 450 Nationals. He won the opening five motos, besting the field by an average of 37.81 seconds per moto (including a ridiculous 1:31.18 win margin in the second moto at Hangtown). However, the sixth moto of the year bit him. Tomac and his Honda were whipped to the ground in the second moto at Thunder Valley (while Eli was leading). The resulting blow left Tomac in need of double shoulder surgery, thus ending his title hopes.

Motocross can be unkind. Attention fades away from an injured rider, and Eli Tomac was not exempt. While Ryan Dungey was the talk of the town this summer, Tomac was at home in Colorado doing rehab on his shoulders. People flock to the winners, and Eli was an afterthought. That time will soon end. Tomac will be back in 2016, and he very well could be off Honda (rumors have him going to the factory Kawasaki team). I gave Eli a ring to see what he’s been up to, his thoughts on improving the sport, the Thunder Valley crash, and Team USA’s chances at the MXDN. It doesn’t appear that you’ve been sitting around whiling away in misery. What have you been up to? I’ve been trying to stay busy. With the injury I had, I’m able to get out on the road bike. There hasn’t been any mountain biking yet, because my shoulders aren’t quite strong enough to handle that type of riding. I’m getting cardio in and working out in the gym. The point is to slowly build myself back up so that I’m ready once the time to ride a dirt bike comes around.

When will you be able to ride again? I’m hoping to be back riding somewhere around November 1st. That seems like a good goal, because I need to be completely ready to ride and not worry about my shoulders. It’s hard to handle 200 pounds underneath you.

“HONESTY, YOU CAN ALMOST BURN YOURSELF OUT WITH RIDING TOO MUCH SUPERCROSS. GUYS START RIDING SUPERCROSS RIGHT AFTER THE OUTDOORS END. WITH SUPERCROSS GOING ALL OF THE WAY THROUGH MAY, IT CAN BE A LONG SEASON.”

That will leave two months for you to get ready for Supercross. Is that enough time for you to prepare for Anaheim 1? Yeah, I think so. Honestly, you can almost burn yourself out with riding too much Supercross. Guys start riding Supercross right after the outdoors end. With Supercross going all of the way through May, it can be a long season. I think that I’ll be okay.

It doesn’t seem like a week off from riding and training between the end of the Nationals and Supercross testing, which is the schedule that many riders follow, is enough down time. Is it? I agree. Motocross is one of the worst sports for that. No one takes enough time off. I personally don’t think that a rider will lose everything by taking more time off. You’re still going to know how to ride a dirt bike, and you won’t lose much of your physical base if you’re in really good shape. It’s pretty wild how much time we ride in between races and throughout the whole year. If you look at car racing, you’ll see that those drivers are only really driving on the weekends. I do know that it’s different, because motocross is so physical, but you can easily ride too much. With you father being a famous mountain bike racer, you’re well aware of the physicality of that sport. You’ve probably been exposed to a myriad of other sports, as well. Where does motocross rank in terms of physical challenge? It ranks very high. I think that it’s tough to compare to other sports. Take a look at the Tour de France. Road cyclists endure a lot more in terms of cardio. Those guys are gnarly. At the same time, pounding out 35-minute motos is one of the most demanding things a person can do. Every sport is different.

Does Thunder Valley seem forever ago? It actually does. I’m itching to get back on the bike. At the same time, it’s nice to have the time to do certain things that I haven’t been able to do in years. I do miss being in my rhythm of riding, training and racing.

I’m sure that you’ve replayed the Thunder Valley crash in your mind a million times. What do you make of it? I would call that crash a fluke. It was a combination of the corner being slightly off-camber with braking bumps. The dirt was also a bit wet, and my rear end stepped out. Honestly, I was never out of  control in any of the National motos this year. That was the bummer part of the whole deal. I wasn’t riding out of my mind and tossed it away in glory. Something just came out of nowhere and bit me. It was a bummer.

Can you explain the reason for your unbelievable performances in those opening five motos of the 450 Nationals? I don’t know! It’s tough to say. I hadn’t really had that happen before. I guess it was a combination of being healthy, feeling good on the bike, and getting good starts.

What was it like to line up at the gate knowing that you were going to obliterate the field? I realized that after I could do it once, then the second time came easier. Every time after that I expected to win. Once you get in that mindset then you really start winning a lot of races. It’s a place that mentally I’d like to get back to.

So…should we expect to hear any news on October 1st? [Laughter] Come on, now! All I can say is that most motocross contracts are up on September 30th.

You’re the biggest talent to hit the open market for 2016. That has to feel special. It’s huge. Our sport is tough. You can make a really good living if you’re one of the top guys, but if you’re in the middle then you can barely afford to get to the races. Motocross is a very top-heavy sport. If you’re a good guy, then you’re in good shape financially. If you’re a mid-pack guy, then you’re not really cutting it. As long as you’re getting on the podium and winning, then you’re in a good spot. Can anything be done so that a mid-pack guy can be financially stable and reap the rewards of dedicating his life to racing motocross? That would be really healthy for the sport if that 10th- or 15th-place guy could sustain himself. Looking at other sports, a 10th or 15th place guy is killing it. It could be in golf, baseball, or Formula 1. In motocross you have to finish in the top five or seven to be making good money. Otherwise you could easily go find a job that makes more money or go back to school. It’s a bummer.

Did you follow the Nationals after your injury? I did, and it was tough to watch. I focused most of my attention on the 250 class, because Zach Osborne was staying at our place during the summer. Watching the 450 class kind of bugged me.

Osborne was really close to finishing third in the 250 point standings. What role did you have in helping him during the Nationals? It was a good change for Zach to stay with us. He really likes Colorado, and we had a good training program before I got hurt. He kept doing the program after I got injured. I might have him back next summer, too. He’s a good guy to have around, and we had fun riding together. There were days I would go out to the track with him while I was hurt, because he’s a great guy. In the past I pretty much always rode and trained by myself. From time to time I would have some other riders come out for a few weeks and do a camp, but I never had a training partner. My Dad would ride bicycles with me, but that was about it. That’s why having Zach at my place was such a nice change.

With the Motocross des Nations coming up, and your experience racing the event, what’s it going to take for Team USA to win? From my past experiences there I learned that it’s all about consistency. Both years I was there we were an inconsistent team, and I jacked some of it up. All of the guys on Team USA are fast enough, but they cannot mess up. I never had the perfect race there. It’s a tough race, with a lot of pressure put on the riders. I would tell those guys to go into it with a level head. They have the same chances as everyone else, aside from France. The French killed it last year, and this time around they’re racing at home. They’ll be tough to beat.

Thanks for the time, Eli. I speak for every race fan when I say that I’m looking forward to seeing you back on the track. No problem, John. I’ll be out there soon enough. Thanks for the call.