It has been a long haul for the regular REM racers to get through the 2021 season. Not only did it start way back on January 9, but the riders faced cold (for California) winter days, boiling hot 105 degree Summer days and dealing with the nagging injuries that come with the job. But, with only two races left on the 2021 schedule every one at REM this past Saturday was in a joyous mood. Why? (1) First of all, this wasn’t the last REM race—that honored would happend at the final round on December 18 (it would be the final because both Christmas and New Years Day fall on Saturdays. Hawaiian Brian Medeiros came to REM to test suspension settings for his Ekolu Suspension company, but unfortunately, Brian hurt his ankle in practice and had to trade racing for sitting in the emergency room. It was a major sprain and a hairline fracture. Photo: Mark Riker

(2) This has been the mildest Winter in recent history and this Saturday was no different. It was sunny, warm, 75-degrees and calm. Five-time World Vet Champion, in the Over-40, Over-50 and Over-60 classes, Pete Murray (7) cruised to victory in the Over-60 Expert class. Photo: Mark Riker

(3) The track had some new features, that while rough and rugged were considered a challenge by every rider who tackles them. The steep downhill on the other side of the Mt. Whitney uphill has massive squared-edged braking bump that required creative line choices to avoid taking a beating. Jon Ortner finished second behind Pete Murray at REM, which is exactly where he finished behind Murray at the 2021 World Vet Over-60 Championship. Murray knows how Jon feels because he was in the same class as Doug Dubach for 20 years. Photo: Debbi Tamietti

(4) And, apart from a few isolated kickers, the track was the smoothest in recent memory. As it transitional from hard pack to loam to sand and that back again, it let the riders concentrate on making passes. It was all about going fast and there were fast riders in virtually every class and age group.

Winning the important classes at REM isn’t always possible, but grabbing a holeshot in front of a pack of ex-Pros is. Looking at these photos will give you arm pump and those out-of-the-blue leg cramps later tonight. Enjoy MXA tests motorcycles by racing them, not occasionally, but every week. Here, Mike Monaghan (32) and Randel Fout (36) hammer out laps on MXA’s 2022 KTM 150SX and Yamaha YZ125. 사진 : Debbi Tamietti 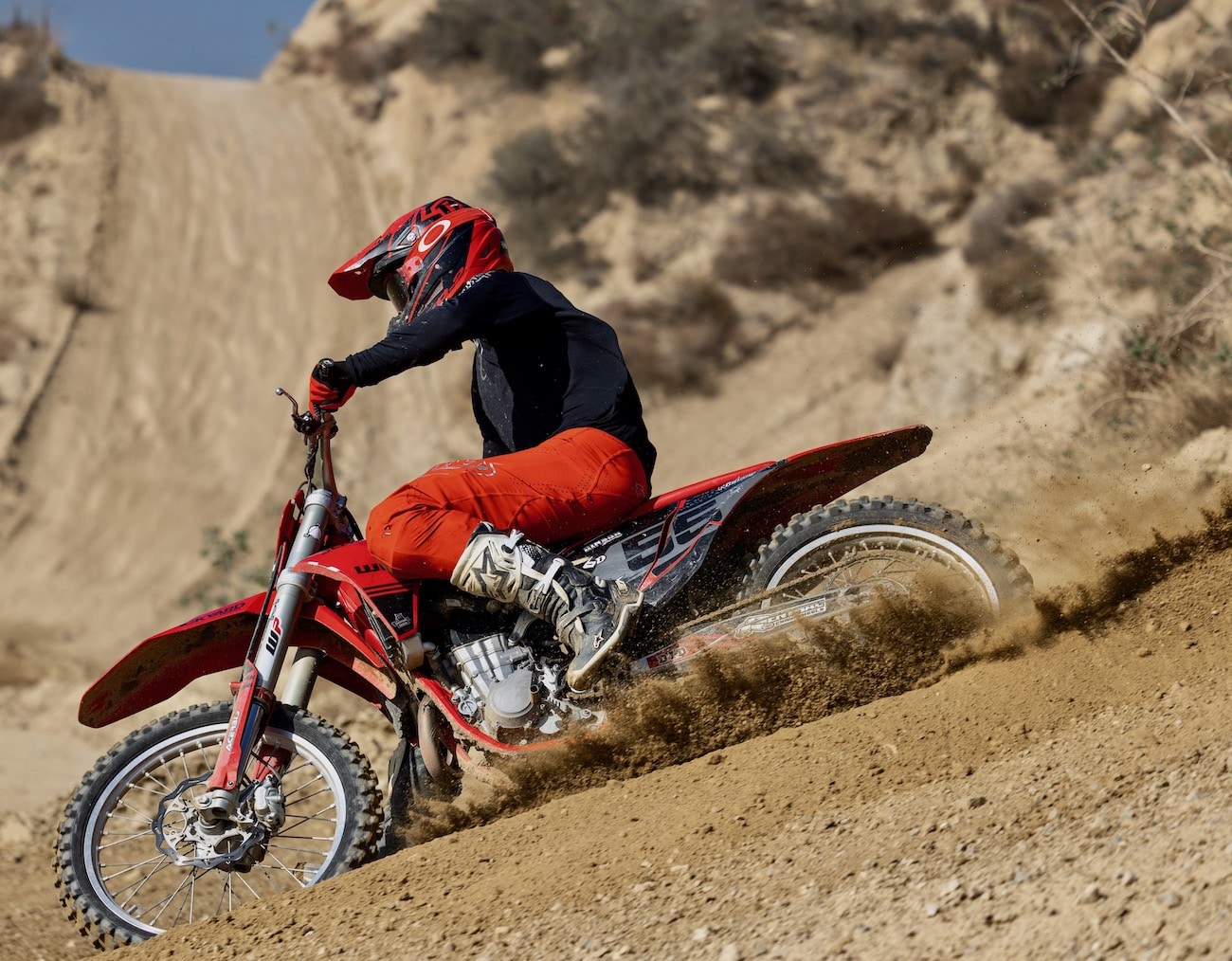 It is extremely rare to find two guys who have race against each other for decades, who still manage to engage in a friendly rivalry year after year. This week, Lars Larsson (13) won the first moto and Jody Weisel (192) won the second moto. 사진 : Debbi Tamietti Former British 500 GP factory rider Rob Andrews came out to REM to enjoy the sunshine and hang out with friends he made when he raced REM a couple years ago. He is also the author of the best selling “The Inside Line” motocross book which you can order from www.robandrewsmx.com. 사진 : 존 오트 너 Ian and his brother Paul Fitz-Gibbon had been mainstays of the SoCal motocross scene for the last 20 years, but now Ian (21) lives in Colorado, so he only gets to race with his buddies occasionally. 사진 : Debbi Tamietti Australian Dan Alamangos (16) has been missing from action for a couple months after contracting a bad case of Covid-19 that put him on a respirator for 16 days. He was one of the lucky ones. He came back to racing for the first time this past Saturday. 사진 : Debbi Tamietti 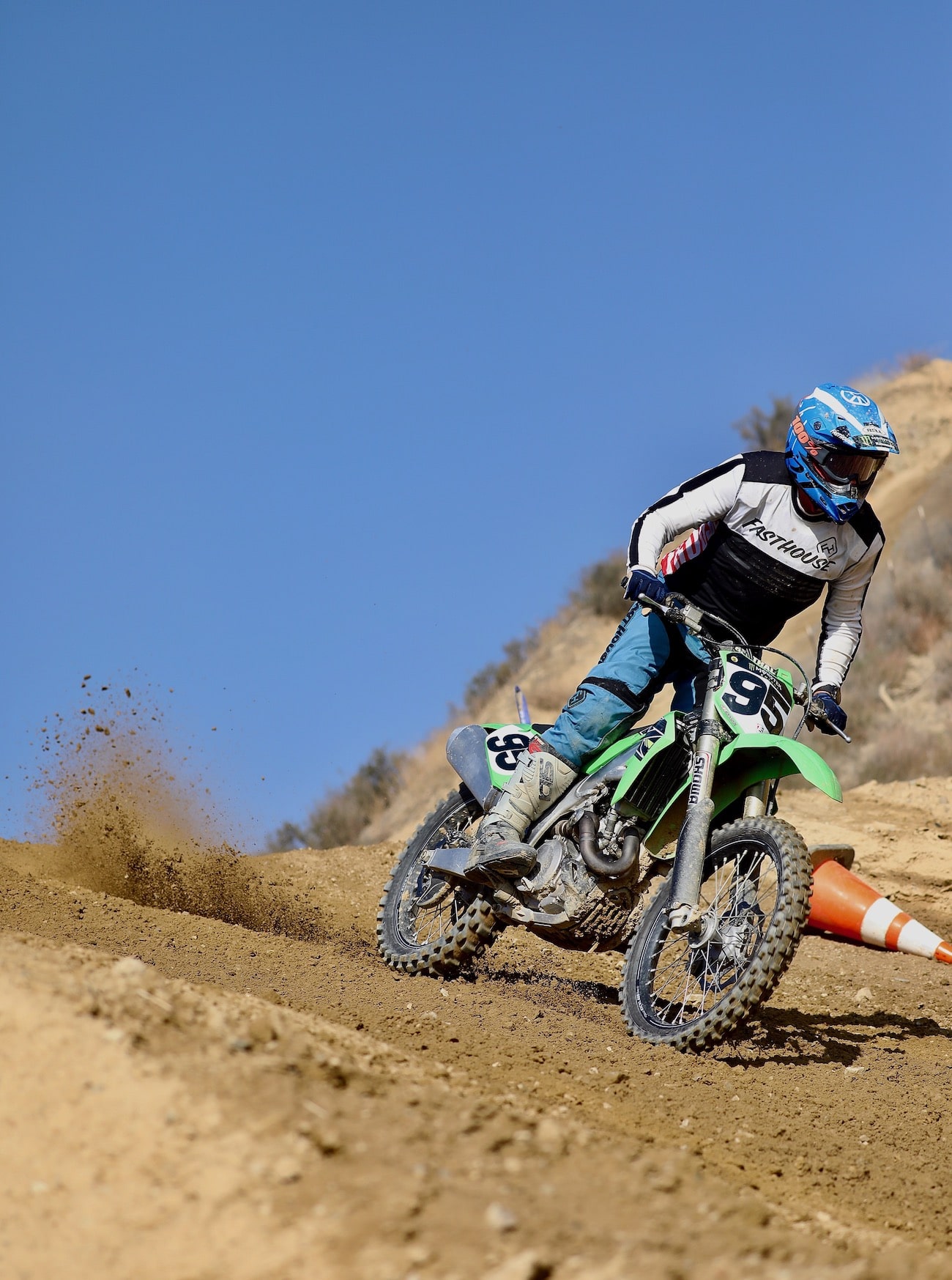 Eric Hjalmarson (95) was untouchable in the  Over-50 Intermediate class. 사진 : Debbi Tamietti 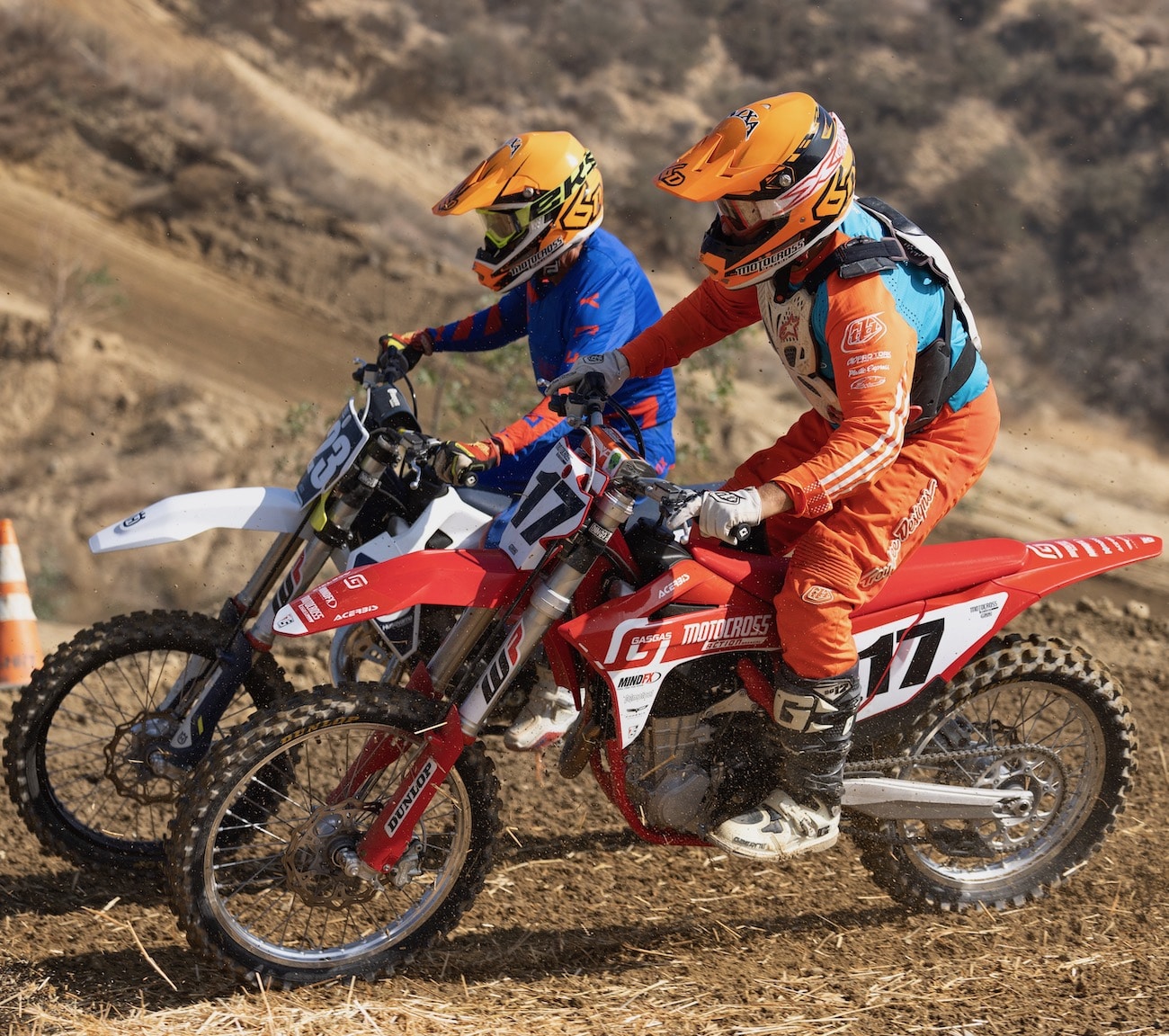 Mark Crosby (17) and Luc De Ley (23) engage in a little two-stroke versus four-stroke battle in the Over-60 Intermediates. 사진 : Debbi Tamietti Greg Groom brought Swedish visitor Karolina out to see her first-ever motocross race. The highlight of her day was meeting 1970’s Swedish motocross star Lars Larsson, not because he was a famous racer from her homeland, but because he was the only one in the pits who spoke Swedish. 사진 : Debbi Tamietti Kent Reed is a large man. How large? Big enough to make a GasGas MC 450F look like a minibike. Kent got two holeshots and used them to give him a 1-1 sweep in the Over-65 중간체. 사진 : 존 오트 너 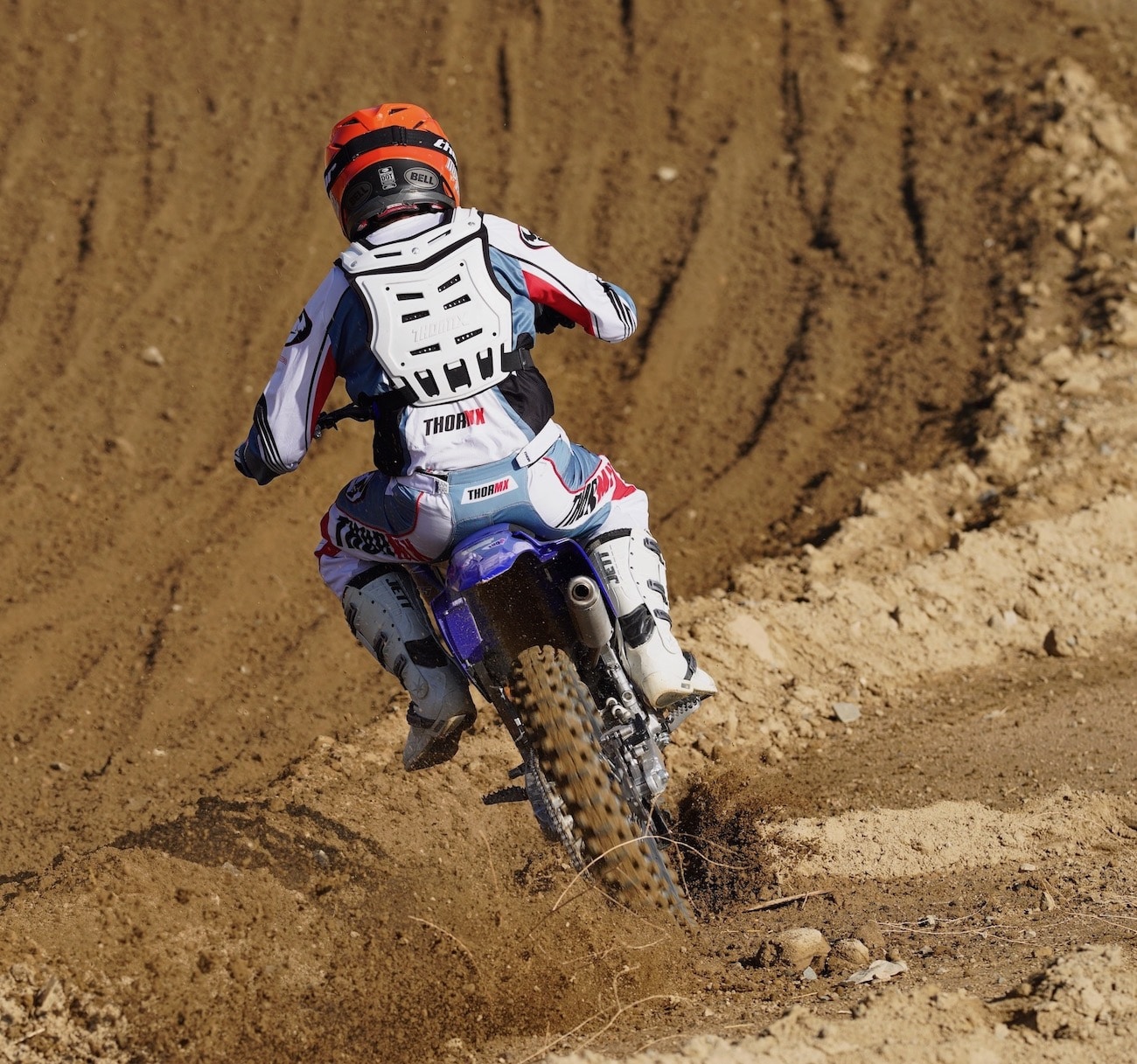 Dan Alamangos can be forgiven for not knowing exactly where the race track is, after all in Australia they drive on the wrong side of the road. 사진 : 존 오트 너 Will Harper (7) beat Bob Rutten for the win in the Over-65 Expert class. 사진 : Debbi Tamietti 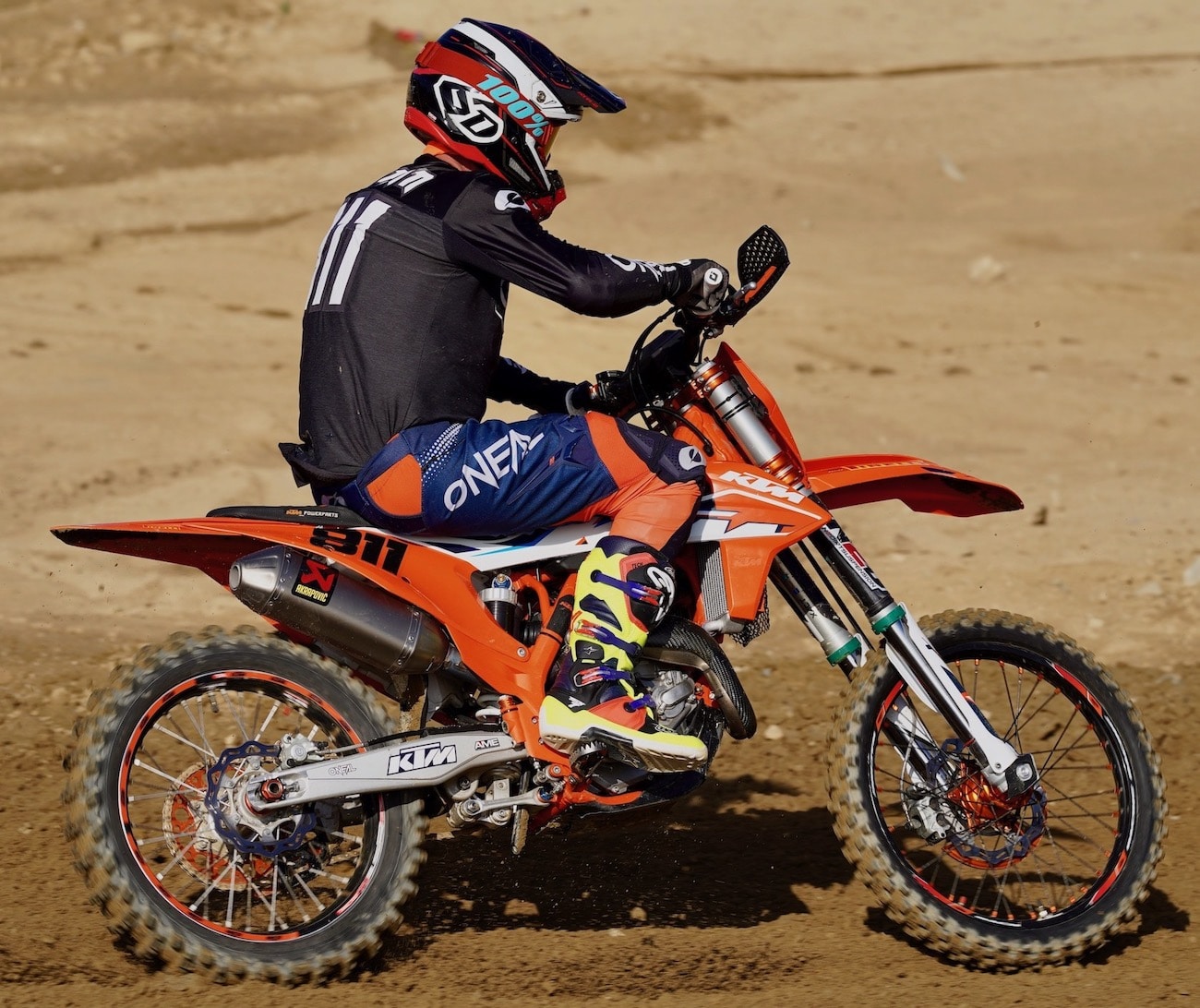 Even with transponders, scoring in the Over-60 Expert race was a mess (except for the top three). Dave Eropkin (110) was originally scored 4th overall, but when the race was reviewed, Mike Monaghan was fourth, Fred Nichols 5th and Eropkin 6th. 사진 : 존 오트 너

REM will be racing again on December 18—for the last race of 2021. For more information about REM go to www.remsatmx.com or Click Here REM의 페이스 북 페이지.