Desert racing with a twist. Andrew Puckett nabs 4th place in the Vete class during the Big 6 race at Glen Helen.

REM motocross races run almost every Saturday, at least that is what I thought? On the 5th of this month I decided to go out and hang with the rest of the MXA gang at REM. I didn’t talk to the boys, I just gambled that they’d be there. I won’t be betting on horse races in Santa Anita any time soon. As luck (or poor scheduling) would have it, I lost. REM was taking a weekend off as the AMA District 37 Grand Prix raced through the many canyons and trails of Glen Helen, including the REM track that day. The weather held up, keeping the dirt nice, damp and loamy. Not one to waste a good race, I stuck around and grabbed some photographs. These Big 6 and Prairie Dog races have a way of running in parts of Glen Helen that most people don’t know exist. One thing that fascinates me about events like this is the community that surrounds desert and offroad racers. Unless you are in the top 10 at these events, many riders team up and help each other out on the various obstacles that come up. It is almost as if the journey is as important as the race. We motocross riders often don’t have that luxury. With much smaller, tighter and technical tracks motocross racers are separated by 100ths of seconds, not minutes. Below are a few photos. That lower hump on this hill is a popular scrub spot. Instead of following the track, The Big 6 riders go through it and up Yamaha Hill all the way to the top. It didn’t look like last Thursday at Glen Helen when it was a mud fest. Weather can change everything—especially the quality of the dirt. Would you believe this is Glen Helen–out in the boonies.

Glen Helen is a land of many faces (and memories). While I’ve seen more of Glen Helen on foot than by bike, last Thursday Dennis Stapleton and I went off the beaten path to find a good spot to shoot photos of MXA’s custom-built  TM 300MX prject bike. I got to tour every nook, cranny and berm within a square mile of where Jody, Dennis and I were parked. The tour ended atop a unforgiving climb up Mount St Helen. Up on top were where grassy knolls, perfect berms and endless ruts. Stapleton is the master of finding new photo spots and Thursday was an experience for me. One thing that makes the higher elevation of Mt Saint Helen unique is that there is an abundance of soft dirt that is not found way down below. With little effort, Dennis could carve a fresh corner with some nice ruts. Since Jody designs the Glen Helen AMA National and USGP track he dislikes rocks. Every time he sees one near the track he hails it away (often tucked under the wheels of his bike). we have to wonder what he does with them.

California is rocky, and Glen Helen seems to sprout rocks more than shrubs. Jody takes care of the track as if it were his garden, plucking out the problem rocks that could plague racers. Rocks are not only pesky for the riders, but if not removed from the track they can eat the teeth and blades of Cats, graders and three-way rippers. It’ss better to remove them than hit them. With the AMA Outdoor National’s quickly approaching, the more of these pests removed, the better. They make great paperweights and door stops. An abundance of pros showed up last Thursday including: Zach Osborne, Colt Nichols and Christian Craig (above). They went that-a-way! MXA test rider Jeremy Lasater (right) points out the next shooting location to Tye Hames (left), while Daryl Ecklund stands at attention with his camera at parade rest.

On Wednesday we went European. French gear manufacturer Shot Racewear held a special ride day at LACR. Coincidentally, the MXA gang had planned to go to Mileston on Monday to do our Husqvarna TC125 versus TC150 kit bike test, but it rained on Monday, so we decided to double up Husqvarna and Shot gear on Wednesday. Yes, you are correct, Husky does not make a TC150. We converted a TC125 into a TC150 with a big-bore  that you can buy from any Husky dealer. We spent the day wringing out out our little Hooskas and wearing brand-new Shot gear. The back-to-back test will not appear until the June 2016 issue, but you’ll be surprised by are 125 versus 150 two-stroke shootout results. Once pro racer, now full time working man, Tye Hames takes a soil sample while showingh off for the camera. The owners of Shot were excited to spend so up close and personal time inspecting MXA’s lids. MXA PRODUCT OF THE WEEK Currently the wrecking crew is testing an assortment of new boots and the TCX Comp EVOis one of them. You will see a full review of the TCX Comp Evo surface in the pages of MXA in the near future.. AXO went purple (back when you could find purple on many of the bikes). Taken out of the January 1993 issue of MXA. 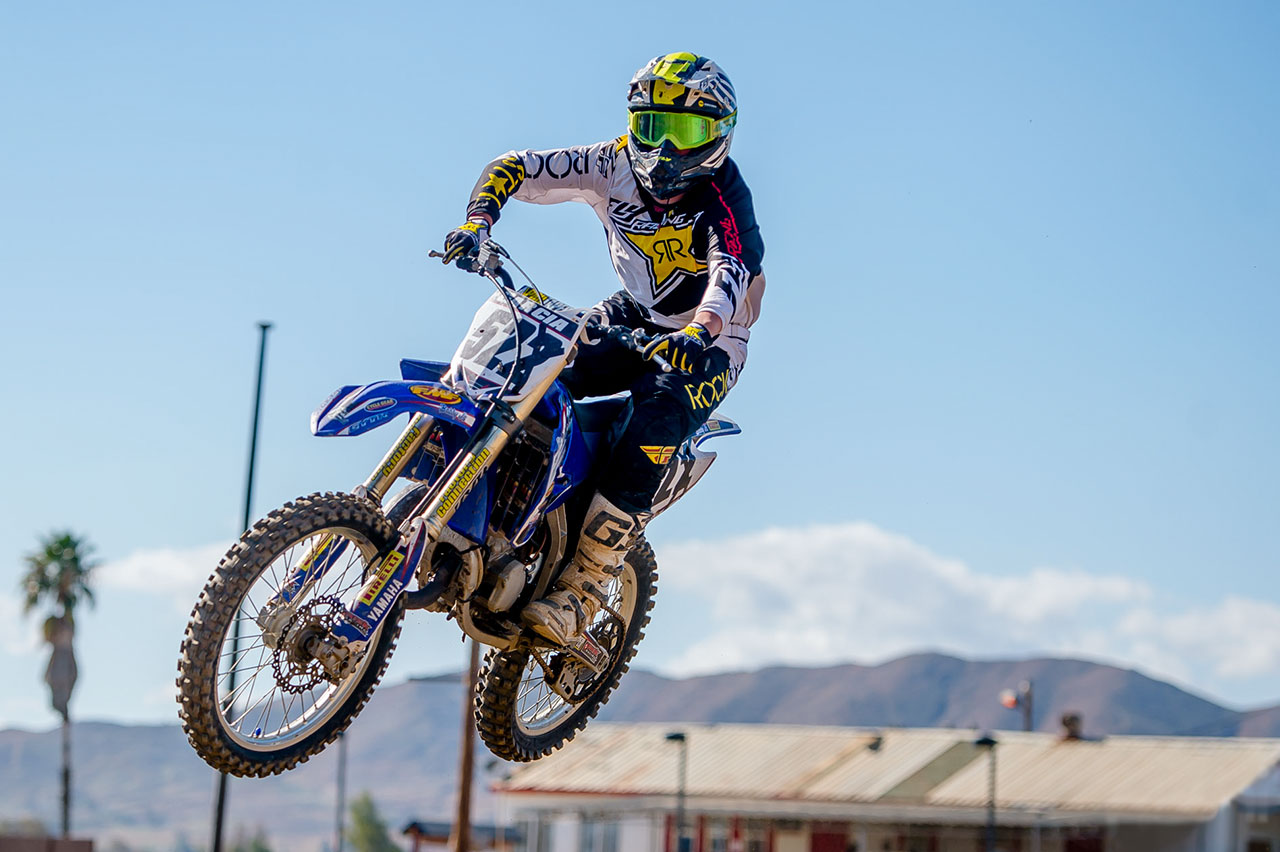 Johnny Garcia isn’t new to motocross. Kicking off his racing career in 2006 in the 4-6 year old Pee-Wee class, Garcia has completed quite a few races. Where the New Mexican teen seems to do well is in the 450 classes, finishing in the top two in more than three AMA sanctioned races last year.

The good old days. This roll of Fuji color silm would give you 36 shots—that you didn’t get to see for a couple days. It was also a very compared to modern digital camera—not just to buy, but to develop. The times have changed, but many of the great photographers bemoan that artistic talent went with rolls of film.

Below is a black and white photo (complete with the sprockets that pulled the film through the camera). Black and white is where I started as a motojournalist and if shot properly can yield some interesting results. Of my favorite film, ISO 50 stock from Ilford, known as PANF tops my list. Ilford didn’t produce PANF in big numbvers, but customers like me loved it for its fine grain, wide range of tonality and overall low ISO. The below photo was taken at REM a few weeks ago. ANOTHER ONE BITES THE DUST: JIMMY ALBERTSON