REM GLEN HELEN: ALESSI STOPS BY ON HIS WAY FROM FRANCE TO CANADA Mike Alessi (1-1) came to REM after racing in England and France to get a warm-up race before heading for the Canadian Nationals for the next two weeks. Mike says his focus is on the USGP in September. Photo: Debbi Tamietti

The REM motocross races at Glen Helen have reached the midway point in the 2015 season. The 40-race long series started on January 10 and will run until December 19, 2015. It is a grueling schedule, and while it offers SoCal racers consistent place to race, most REM racers are so hardcore that they try to race all 40 races. They show up sick, injured, with casts just removed, sometimes without the casts removed and with disapproving spouses sitting at home every Saturday of the year. Sean Collier (207) made a surprise one-moto appearance in the 450 Pro class on his Kawasaki KX500 two-stroke. He finished third and then went to a vintage race on Glen Helen’s other track. Photo: Debbi Tamietti Robbie Wagemen (108) chased Sean Collier for second in the 450 Pro class for 20-minutes and finally got him on the last lap. In the second moto, Wageman didn’t have Collier to chase and Alessi was too far ahead to see. Photo: Debbi Tamietti

Of course, REM can’t race every weekend because they have to make way for other Glen Helen events. For example, REM does not race next weekend because Glen Helen will be hosting a Quad/UTV Madness event on Friday, June 12, followed by the grueling “Last Dog Standing” offroad race on Saturday, which is immediately followed up by the even more grueling 10-Hours of Glen Helen Endurance race — which starts at midnight after the “Last Dog Standing” race and runs until 10:00 a.m. on Sunday. Spencer Burns (782) does his best San Jose Mile imitation as he flattracks his way to third in the 450 Intermediate class behind Austin Burke (1-1) and Michale French (2-2). Photo: Debbi Tamietti Jon Ortner (10) cranks his YZ250 two-stroke around a corner, while his outside foot floats above the peg. That’s a light touch. Photo: Dan Alamangos Joe Sutter (11) and Luther French (2) share the airspace over Glen Helen. Luther was 2nd in the Over-50 Experts and Joe was 7th. Photo: Debbi Tamietti 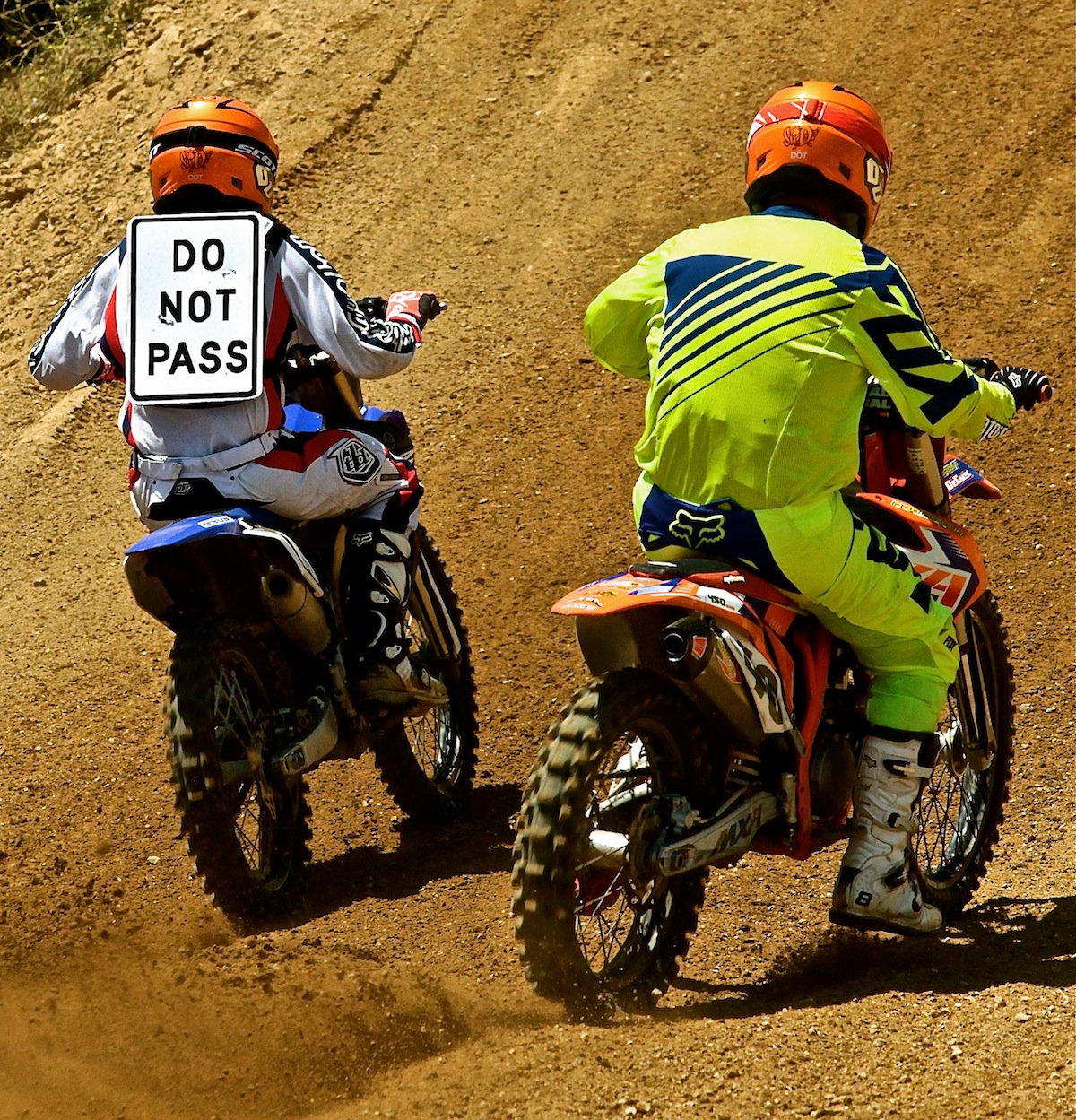 It is obvious that reading comprehension is at an all-time low in this country as Mark Hall (40) ignores a clearly stated Interstate 5 highway sign to pass Dan Alamangos in the Over-50 Expert class. Photo: Debbi Tamietti Not every day goes as planned, Terry Cook (303) needed the help of his friends to get his stricken RM-Z450 off the track. Photo: Dan Alamangos Just a wild guess, but we believe that Over-40 Intermediate Robin Hall (412) may have had an off-track excursion. Photo: Dan Alamangos