Go ahead and find motocross fan in this photo or any photo. Hint: you won’t need to use both hands to count.

For the third year in a row the opening round of the 18-race Grand Prix series kicked off in Losail, Qatar. The track, which is held next to the famous Losail International road race Circuit, is a flat piece of baked land with man-made jumps. It is a far cry from the historic locales of European Grand Prix racing. Holding a race in Qatar is an odd way to begin the Grand Prix series for the following reasons: This is a far cry from the GP tracks in Lommel and Valkenswaard.

(1) Flyaway. All of the teams are based in Europe, so they are forced to fly miles away from their home base and home fans. Imagine if the AMA Nationals started in Panama City. That’s the equivalent of beginning the GP series in Qatar. It is a costly and difficult venture for the teams and requires planning, forethought, and a bunch of money to orchestrate. Gautier Paulin sails over one of the massive man-made jumps at Losail.

(2) Night race. The AMA series held a night National for several years at Lakewood, just outside of Denver, Colorado. It didn’t work. Guess what? A night race in Doha, Qatar, doesn’t work, either. Not only that, but the gate dropped for the final 450 GP moto at 11:00 p.m. Ryan Villopoto must have had toothpicks in his eyes, hidden only by his Oakley goggles, in order to keep his eyes open. Approaching the midnight hour is too late for any activity that doesn’t include glow sticks or a telescope, nevermind motocross.

(3) Spectators. What spectators? Youthstream claimed an audience of 9000. In truth that number was far fewer…probably 7500 people fewer. Although Youthstream tried to bolster attendance by giving away free tickets, it’s hard to give tickets to people that aren’t there.

(4) Saturday. Grand Prix races have long held steadfast to a two-day schedule–practice and qualifying racing on Saturday, with warm-up and racing on Sunday. Qatar, on the other hand, moved to a Friday/Saturday program. This is just another example of how far off base Youthstream is with holding the opening round, of what is supposed to be the premiere motocross series in the world, out the flat outskirts of a MotoGP racetrack in the desert on a Saturday night.

As a result, the Qatar GP a lackluster turnout in attendance, not only noticed in the stands, but also on the starting gate. There were only 26 riders in the 250 class and a slightly better turnout of 29 riders in the 450 class. However, the action didn’t disappoint. German Max Nagl couldn’t be challenged in Qatar. He was a perfect 1-1 on the evening.

The German was flawless in Qatar, scoring dual moto wins and collecting a perfect 50 points on the evening. He was the only rider to dip into the 1:49 lap time in the second moto, gapping second place by six seconds. Nagl has had a rocky road the past few seasons, getting cast aside by KTM and then losing a factory Honda ride. Losail was redemption for Max and for Husqvarna, and it proved that he shouldn’t be overlooked in the championship picture. He has gelled well with the IceOne Husqvarna, and it showed. It marked Nagl’s sixth 450 class win, which spans all of the way back to 2008. Jeffrey Herlings (84) sneaks up the inside of Dylan Ferrandis (4). Herlings went on to sweep both motos.

Picking Red Bull KTM rider Jeffrey Herlings to win the 250 series opener was a safe bet. Herlings, the most exciting 250 rider since Tony Cairoli, didn’t look as dominant as would have been expected. Chalk it up to rust, because Jeffrey is coming off a broken femur from a pit bike incident last year. Dylan Ferrandis kept Jeffrey honest in the first moto, while Julien Lieber was close to Herlings’ rear fender in the second moto. Still, the Dutch wonder won both motos and logged the seventh fastest lap time in the first moto among the 250 and 450 class, putting in a 1:51.698 (to compare, Ryan Villopoto notched a 1:51.201). Herlings’ two-moto sweep was emotional for the youngster. See below: In retrospect, there was no way that Ryan Villopoto could have met expectations – particularly those from the U.S. Anything short of domination would equate to a losing effort. That’s too bad, because RV deserves unflinching support from his expansive fan base. Why? Not that he needs excuses as to why he didn’t win, but the guy hasn’t raced since May. He skipped the Nationals to have his knee fixed and didn’t get on the bike until November. In that time he switched teams, moved to Europe, and had to learn the ins-and-outs of a completely new race series. Even the starting procedure is unique. Ryan Villopoto, the multi-time champion that he is, knows what it takes to win…in America. He certainly didn’t win on a dark Saturday in Losail. It’s obvious that past success doesn’t determine Villopoto’s future in GP racing. Villopoto will learn the ropes, but it may take some time before he’s up to speed. If he could have gotten better starts (or at the very least not given the pack a ten second head start), avoided the Jose Butron buzzsaw, didn’t have rear brake problems, stayed off the ground and made smarter decisions when trying to pass the established GP veterans then he would have scored more than a distant seventh place overall. That’s a lot of “What ifs,” but one has to believe that the Qatar GP was the worst race that Villopoto has had in a very long time. Just imagine how different things will be once RV finds his groove. It is reported that RV headed back to home base in Belgium to test with the KRT Kawasaki team before making the long flight to Thailand (and then on to Argentina). He is one of a few riders to fly back to Europe, as many others have chosen to go directly to Bangkok for the upcoming round. Will the long travel and limited testing pay off? Ryan Villopoto had this to say about his day:

“I haven’t raced since May last year, and it wasn’t a good day but we scored points and that’s definitively something we have to work on. I never had a schedule like that one for a long time, but I’ve got to get used to that and all the rest, including how the gate drops, how they do everything. We struggled a little bit with the start today, a little me and a little the bike, but we came back and got points. We’ve definitively some work to do, but that’s part of it. We learned a lot this weekend and will be stronger at the next GP; we have to work on setup stuff, which make thinks a little bit easier. For me every time I went on the track this weekend things went better; in the second race I had some issues as my rear brake felt strange; I don’t know if it’s a rock or what, but it’s part of the deal. We can make some stuff this week, even if the team doesn’t go back home, and we will be better next weekend.” Although a total unknown in U.S. professional racing, Thomas Covington made a name for himself when the Alabama native had a third place finish in the second moto of the opening round in Qatar last year. It was the first GP he ever raced — and he has never raced an AMA National or Supercross. After last year’s good start in Qatar he was a 10th through 20th place finisher. The Qatar track meshes well with Covington, because he nearly won the Friday evening qualifier leading up to Saturday’s main event. Jeffrey Herlings passed Covington on the last lap, but it didn’t matter. The American proved that he has improved over the last year. However, a bad start and a tip-over kept Covington from meeting expectations. He’s healthy and will be ready for Thailand this next weekend. Tony Cairoli has won one moto in six tries in Qatar. He went oh-for-two on Saturday night. 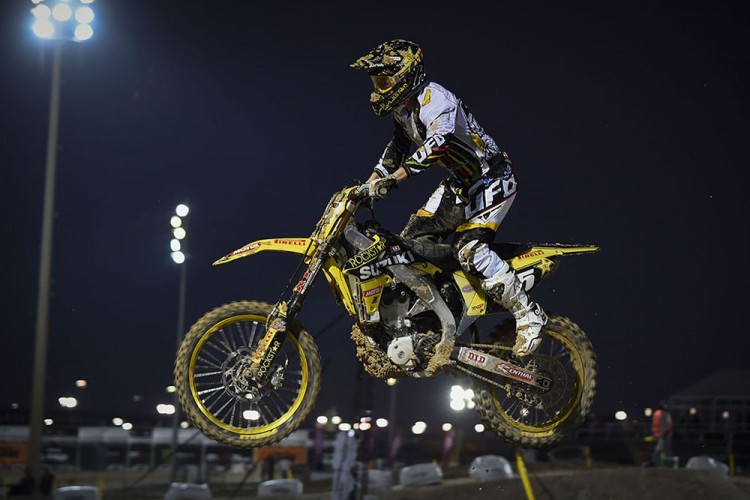 Clement Desalle was blazing fast in Qatar, but he couldn’t get close enough to challenge Max Nagl. KRT Kawasaki’s Tyla Rattray struggled with suspension setup all weekend. He was barely inside the top 20–not a good sign considering there were only 29 riders. Sidi made Tony Cairoli this very creative light-up boots. They stood out in the dark. Defending 250 champ, Jordi Tixier, had a rough go of it in Qatar. His 6-9 moto scores gave him 9th overall. He’s 23 points behind Jeffrey Herlings after one round.

The MXGP series heads to Nakhonchaisri, Thailand, this upcoming weekend. It is a new circuit located to the west of Bangkok. Look for a full race report, brought to you by the fine folks at www.moto-masterusa.com. Thanks for reading.

10 THINGS YOU NEED TO KNOW ABOUT THE ATLANTA II SUPERCROSS