TWO-STROKE SPOTLIGHT: 1995 KAWASAKI KX125, BEFORE AND AFTER “It has been awhile since I have shared any of my project bikes with MXA. Here is my most recent build, a 1995 KX125 built after one of my childhood hero’s–Robbie Reynard. As you can see the original platform was in pretty good shape which made things easy. I started by sending the frame out to Curry Custom Coatings for a fresh coat of Kawasaki Green powder.

“The engine came in a box, the cases and cylinder were sent to Eric Gorr Racing to get the cylinder repaired, as well as a Team Green spec port job and case matching. The engine was assembled with all new bearings, seals and gaskets from Hot Rods, Winderosa, and a Vertex piston. “The engine cases, swing arm, frame guards, brake calipers and master cylinders were sent to KE3 Restoration to be Vapor blasted, to bring back that show room finish. The clutch cover and housing were also sent to Curry Custom Coatings to be Cerakoted for the factory magnesium look. I also sent all of the OEM hardware out to be re-zinc plated.

“When everything was back in my possession, I began assembling the chassis where I used All Balls Racing bearing and seals, the forks and shock were rebuilt by Dan Elings at Race Pace Performance where he also used All Balls components as well as Race Tech Gold Valves. The stock hubs were Powder Coated to resemble the factory look and were laced using Pro Wheel Racing spokes and hoops. “I was able to source an original Braking 270 oversized front brake rotor and coupled with a Tusk Racing Honda-style stainless brake hose to insure that it stops on a dime.

“This build would not have been possible without the help from the following.”

Editors Note: Please keep those submissions coming. If you would like your bike to be featured in the “Two-Stroke Spotlight,” please email me at [email protected]. All I ask is that you give a breakdown of your bike and a detailed description of the build. Please also send a few photos of your steed. By submitting your bike for the “Two-Stroke Spotlight,” you agree to release all ownership rights to the images and copy to MXA. Please don’t email me spam or try selling me Taylor Swift concert tickets or email me spam. Press Release: Pro Circuit’s commitment to offering KX250 customers the very best accessories for their bike continues with the release of the new airboot for the 2021 model. Designed to optimize the intake track, the Pro Circuit airboot seeks to enhance the “intake wave” so as to increase the airflow into the motor and consequently increasing horsepower.Here’s your opportunity to add a product to your 2021 KX250 that will increase performance and give off a works look that the OEM airboot never could. www.procircuit.com

WHAT ARE THOSE NUMBER ON MY SHOCK SPRING? Dear MXA,
One day while adjusting the shock spring on my KTM I noticed a row of numbers. I had never seen them before. I asked my buddy what they were and he said a serial number, but another guy said they were the spring rate. He didn’t know why there were two numbers but guessed that one number was kg/mm and the other inch-pounds. What are they really?

You were as close as you could get while still being totally wrong. See the 54-260 on the spring above? The first two-digit number is the spring rate. The spring rate is 54 Newton/meters. The second number is the free length of the spring—which in the photo would be 260mm long. KTM does not use kg/mm, but if they did this spring would be a 5.5 kg/mm spring. The idea that the second number represents inch-pounds doesn’t work for two reasons: (1) No one in Austria has ever heard of an inch, let alone an inch-pound, but if they did a 54 N/mm spring would be 477 inch-pounds.

THE NEW MXA IS OUT: INSIDE IS THE 2021 MXA 250 SHOOTOUT, HIDDEN SECRETS OF THE FACTORY & ROCKSTAR EDITIONS, PLUS TWO EURO 250 SMOKER TESTS & ALL THE GOOD STUFF YOU EXPECT 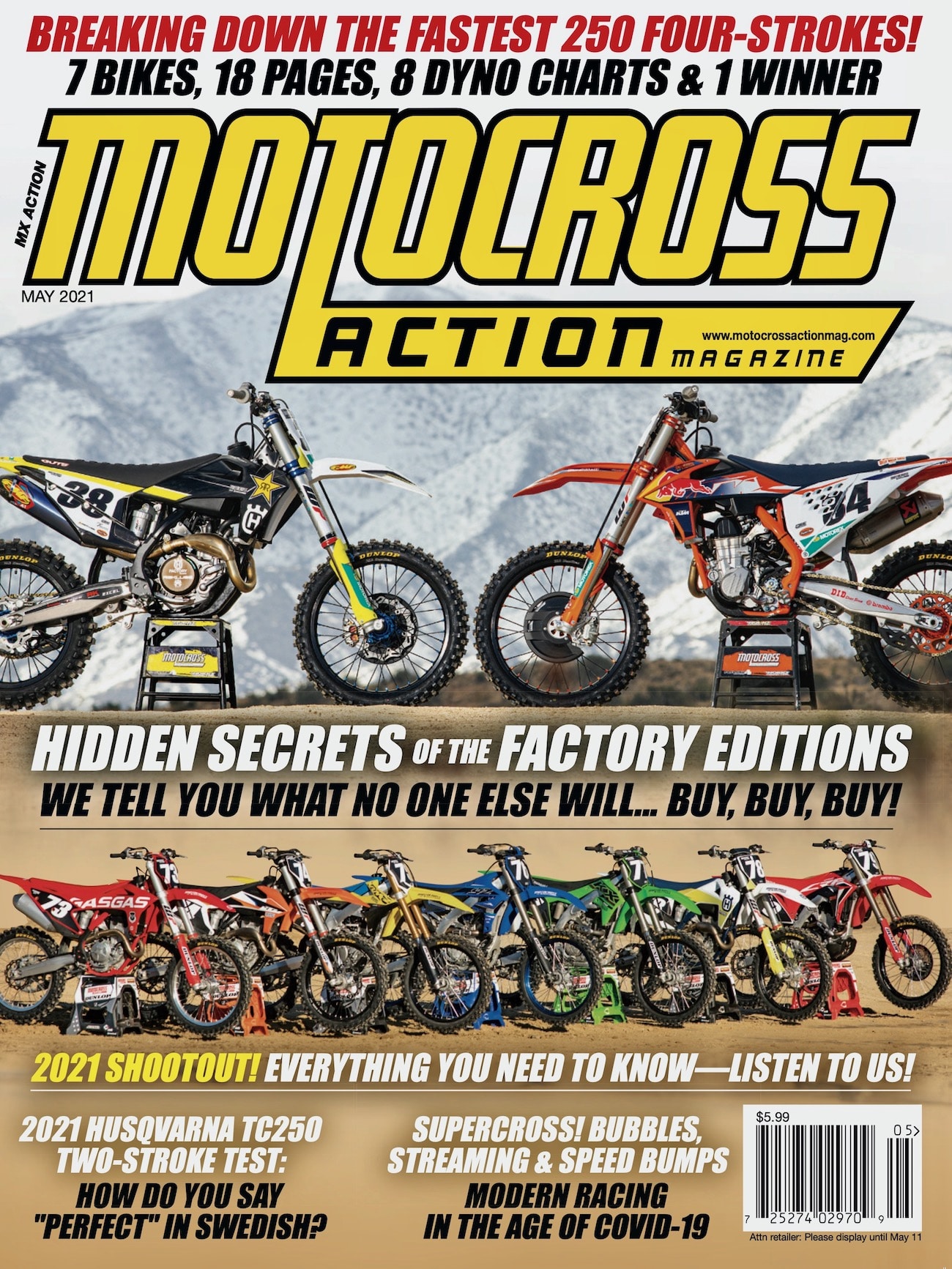 Name the riders with the number 16 and 1. Answer at bottom of page. 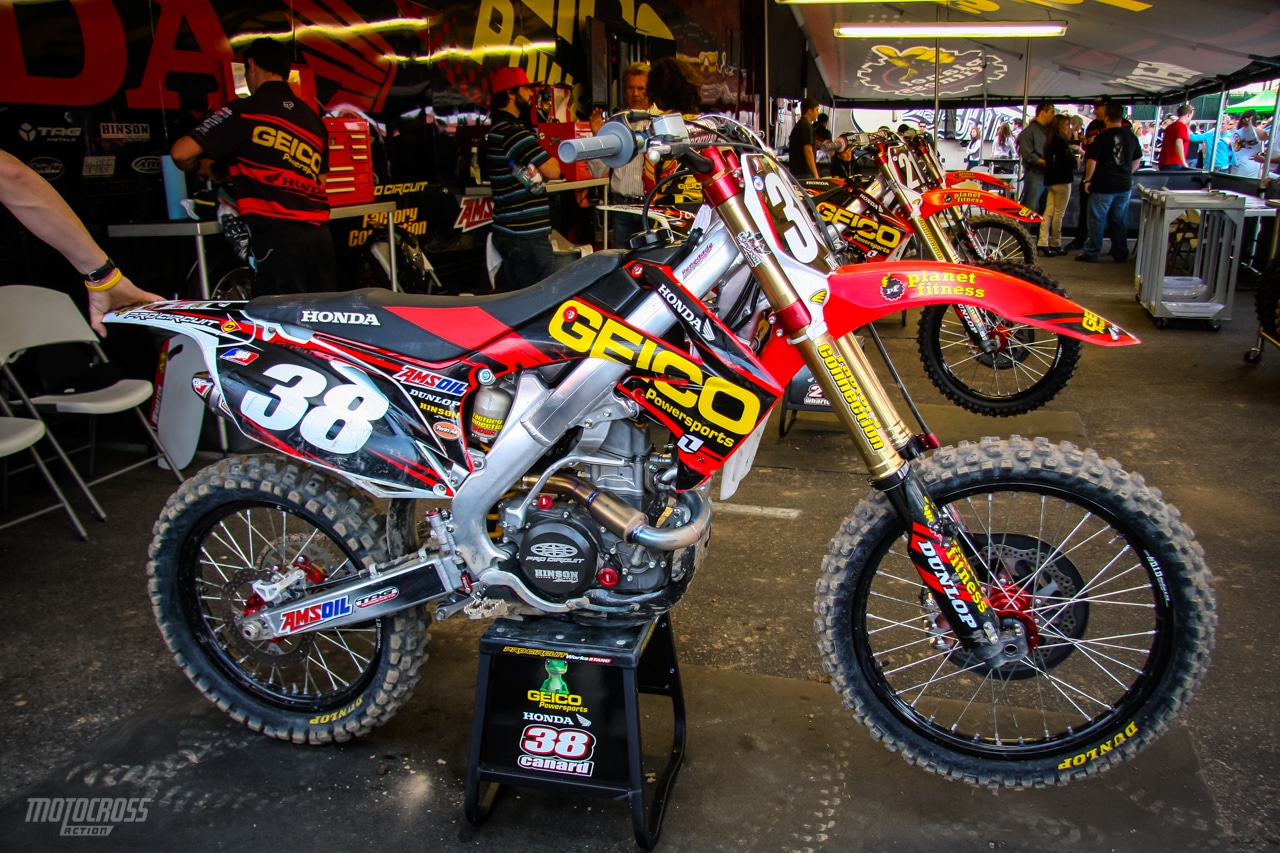 The Polisport Pro Octane utility can.

Polisport Pro Octane is much more than a regular utility can. This high-quality heavy-duty can is homologated to comply with ADR standards (valid for Europe), which makes it safe and legal to transport fuel on roads and not only for Off-Road use. The can is produced with highly durable and resistant walls and includes a leak-proof cap for transport. The cap has also an oil/fuel mix gauge so you can identify the fuel mix and, with the utility can, comes an oil mixer included.

The two-handle design was developed to make the filling process easy and effortless if you’re using the Hose filling system or the Quick Fill Spout.

There are also some accessories available to use with Polisport’s ProOctane: The filling hose + cap, that will make the filling process easy, with a fluid stream of fuel. This system has an auto-stop device to avoid the spillage of fuel; Also available separately, the filling hose (without cap); and very soon; the quick fFill system for those who need an even faster pour rate. Moto Trivia answer: This photo is of the start of an Arenacross back in 2004. Number 16 in John Dowd and number 1 is Josh Demuth.

THE YEAR OF JUBILEE TRAILER: A NEW FILM SERIES BY RIDE MOTORCYCLES