“Many people have put KX500 and CR500 engine in new-age chassis’ because one has less conversion work to do compared to the old KTM 500 engines due. For instance the chain and pipe have to be mounted on the opposite side. It took some time, but here is my 1991 KTM 500 engine that was stuffed into a new-age 2018 KTM chassis.” –Andy Styling Who is this rider? Answer at bottom of page.

ROUND 12 HANGTOWN RECAP | THE GRAND FINALE | By Ben Bridges 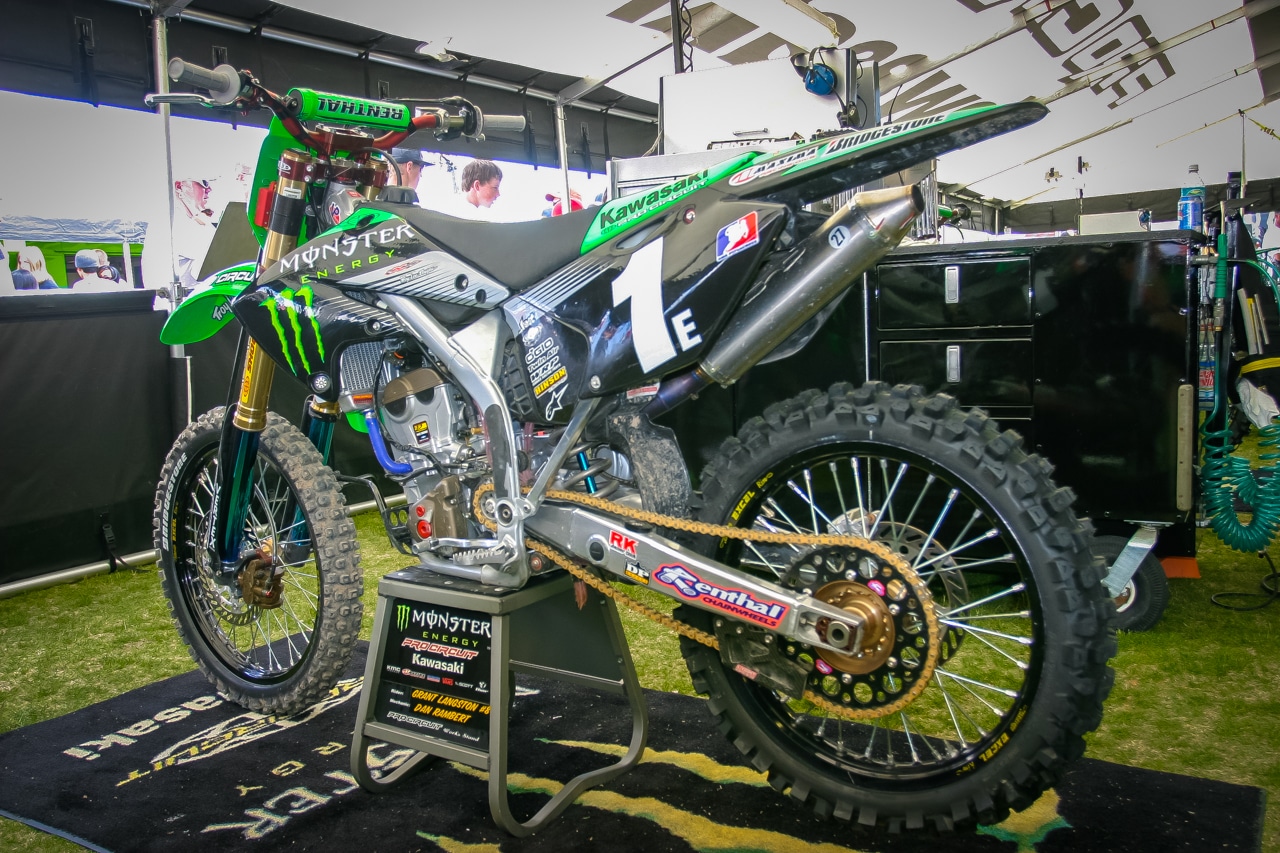 Grant Langston is the only other rider to win both a 250 and 450MX championship. THE RETURN OF THE CR500 BUILT & RIDDEN BY CARSON BROWN

ASK THE MXPERTS: I WANT A MOTOCROSS TIRE THAT I CAN RIDE ON THE STREET? Looking for a street legal motocross tire? The Metzeler MC360 is it.

YOU WANNA DO WHAT?

Having raced in Mexico and ridden dirt bikes on the street, the MXA test crew knows what you are looking for. Most tire companies make a DOT-approved dirt bike tire for use at the ISDE, but we can only think of one tire that is an actual motocross tire that is rated for highway use. The Metzeler MC360 is a street-legal, DOT-approved, on-road tire that can be used for anything from street to gravel to trail to ISDT to motocross. We tested it as a motocross tire and were very happy with its performance on the track, but the farthest we went on pavement was on Glen Helen’s off-road loop where there are short sections of pavement. The MC360 comes in two models, Mid-Soft and Mid-Hard. We tested the Mid-Soft for motocross, but for your conditions, you would probably have better luck with the hard-pack-specific Mid-Hard. It retails for $129.04 (rear) and $99.95 (front). For more information, go to www.metzeler.com. KTM has announced that Marvin Musquin has locked in a deal to remain with the Red Bull KTM Factory Racing team through the 2022 AMA Supercross Championship. It will be his 12th season with the U.S. Red Bull KTM Factory Racing team in 2022, thanks in part to his loyalty to the team his success at the last two rounds of the 2021 AMA Supercross Championship. At 31 years old, Marvin is nowhere near to being the oldest rider on the AMA circuit.

Marvin said, “I’m really happy to extend my contract for another year making 12 years racing in the U.S. and 14 years in total with the Red Bull KTM family! It’s no secret that everyone on the team is like family to me. It will be another fun challenge working with the new bike.”

KTM director of American Motorsports Roger DeCoster said, “Marvin will be back for another Supercross season and I think he wants to prove to us that he is like fine wine and gets better with time. After serious knee surgery two years ago, Marvin worked hard to recover and he is back in top shape, so we feel that after finishing strong in this year Supercross with a win and second in the last two races, he will be back capable to perform at a top level.” This is Brecken Williams a 50cc rider from Watkinsville, GA.  He broke his arm training for his next race. He said his cast looks better with his Motocross Action sticker. Send your fan photos to [email protected]

WHY DYLAN FERRANDIS BEAT EVERYONE OUT Chad Reed and Josh Grant back in 2016 when they were both on the TwoTwo Motosports team on KX450’s.

Moto Trivia answer: Joaquim Rodrigues back in 2005 when he raced for the Factory Connection team.

EVERY 2021 MOTOCROSS DES NATIONS TEAM & WHO WON’T BE THERE