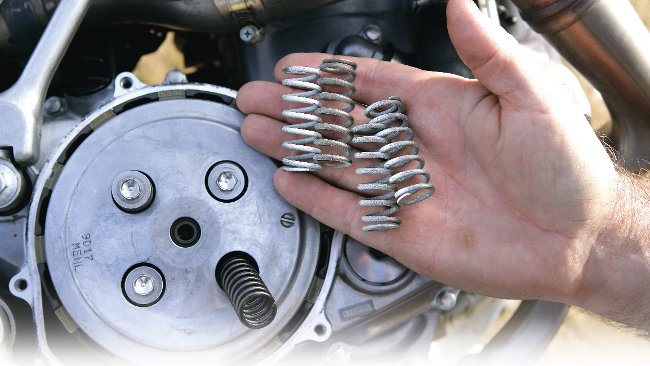 WHAT IS IT? Hinson’s high-temp steel clutch springs keep the 2009 and 2010 Honda CRF450’s four-spring clutch from slipping.

WHAT STANDS OUT? Here’s a list of things that stand out with the Hinson high-temp clutch springs.

(2) Clamping pressure. To make four clutch springs work as well as six springs, the four springs must be stiffer (since each individual spring is doing more work). But when Honda’s engineers tried to get the four springs to match the clamping pressure of the 2008 six-spring clutch, they discovered that the lever pull was too stiff (this was not a problem on the works clutch, because they used specially wound titanium clutch springs). Thus, for marketing reasons, Honda was forced to sacrifice clutch hookup for showroom feel (at the lever). Honda chose clutch springs that had about 35 pounds less clamping force (spread across the whole clutch pack) than the six springs on the previous clutch. With a small amount of wear, the four-spring clutch is more prone to slipping than a comparable six-spring clutch.

(3) Solution. MXA‘s solution was to replace the stock CRF450 clutch springs with Hinson springs. The Hinson springs are 12 percent stiffer, and the coils are specially wound to provide the most progressive modulation possible. The stiffer Hinson springs increase the clamping pressure by 40 pounds.

(4) Performance. Every MXA test rider complained that the stock CRF450 clutch felt mushy at the lever. Worse yet, in a couple hours of riding, feel at the lever was reduced even more and the clutch tended to slip under any abuse. With the Hinson springs in place, test riders could hammer the clutch at will. There is no mystery involved; stiffer clutch springs hook up better than soft clutch springs.

WHAT’S THE SQUAWK? The inherent downside of installing stiffer clutch springs is that the clutch lever is harder to pull in, but that is the trade you make when you are trying to get your clutch to last.

In truth, this kit should get five stars because it improves both the performance and durability of the stock CRF450 clutch. We took one star off because it does increase level pull significantly.

AN AMERICAN DOWN UNDER