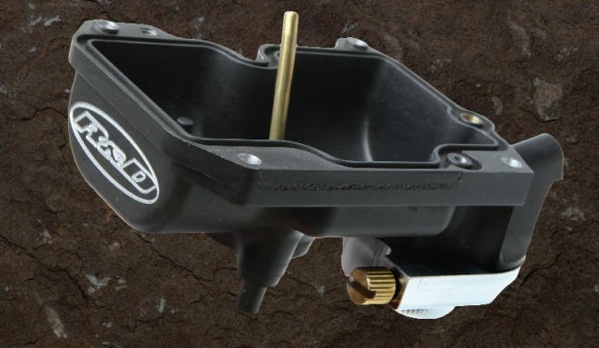 WHAT IS IT? The Power Bowl2 is an upgraded version of the original R&D Power Bowl. It is a complete replacement float bowl, accelerator pump and leak jet that refines fuel flow on Keihin FCR carburetors.

WHAT’S IT DO? The Keihin FCR carb is an industrial miracle. It effectively processes the fuel/air mixture at all throttle settings via an ingenious series of orifices, circuits and tracts. As marvelous as the FCR is, it can be a major pain in the powerband if it is not properly set up. The most common symptoms of jetting issues on four-stroke motorcycles are bogging, coughing and popping. The worst offender has always been the Honda CRF250?especially since they moved to the 40mm carb in 2006. The MXA wrecking crew spends a lot of time dealing with jetting issues, some as simple as those caused by temperature changes, and others that want to throw you bodily to the ground. Once we discovered the R&D Power Bowl, we felt like we had a tool that would allow us to make quick and simple jetting changes without having to disassemble the complete bike to get to the carb.

So, with the release of the R&D Power Bowl2, we were even more elated. Why? R&D Racing is run by Dean Dickenson, son of the famous engine tuner Rudy Dickenson, and he is the consummate thinker when it comes to jetting issues. The Power Bowl2 doesn’t just address four-stroke jetting issues, but improves on the original Power Bowl significantly.

WHAT STANDS OUT? Here’s a list of things that stand out with the R&D Power Bowl2.

(1) Leak jet. One jet that two-stroke owners never had to deal with is the leak jet. Four-stroke owners have to take it into consideration because it is an important tuning tool. On a stock Keihin carb, the leak jet can only be adjusted by pulling the carb apart and replacing the small brass jet. With the original Power Bowl, R&D made the leak jet adjustable, but the adjustment screw was often hard to reach. On the Power Bowl2, the leak jet adjuster is built into the CNC-machined accelerator pump and aims directly at the right side of the float bowl. It is easily accessed.

(2) Float bowl. The production float bowl works by siphoning fuel from the bottom of the bowl as the bike bounces, jumps and careens around the track. It is not uncommon for the fuel in the stock float bowl to cavitate and froth over jumps and whoops. To eliminate this problem, R&D designed a main jet chamber that is totally sealed to keep fuel from sloshing away from the main jet. To make power, you need a constant supply of fuel.

(4) Performance. It works. With just a few minutes of fiddling, MXA was able to get better throttle response and crisper jetting. It was a noticeable improvement on the pre-fuel-injected CRF250s, KTM 250SXFs and KTM 450SXFs, RM-Z250s and CRF150s. Bikes that had a tendency to shoot ducks at full throttle, pop on deceleration, or bog when you wicked the throttle on suddenly, became docile after a few deft adjustments of the Power Bowl2’s adjuster screws. Across the board, throttle response was improved and midrange power increased.

R&D Racing took the Keihin FCR carb one step farther. This is a great product for the thousands of bikes that still have Keihin carbs.