Unlike the other fuel-injected bikes, which stumble at 8000 rpm, the 2009 Kawasaki KX450F keeps pulling to 9400 rpm. The ?09 KX450F has the second most horsepower in the class and decent suspension. Its handling is mediocre. It needs to go on a serious diet, because at 238 pounds it weighs 12 pounds more than a CRF450.
PLUSES: The only fuel-injected bike that can compete in the mid-and-up range.
MINUSES: Gappy gearbox, missed shifts, 238-pound weight, oversized ergos and miscalculated fork offset. The 2009 KTM 450SXF makes the most horsepower, handles very well, stops like no other bike, starts with the push of a button and has a bulletproof hydraulic clutch. The KTM’s powerband is magnificent. It combines the mellowness of the YZ450F with the midrange of the KX450F and a top-end like no other. It makes almost 55 horsepower!
PLUSES: Great engine, awesome clutch and stupendous brakes.
MINUSES: The four-speed tranny, undersprung rear shock, unusual cosmetics and jumbo ergos are its major detriments.
Click Here for the full test 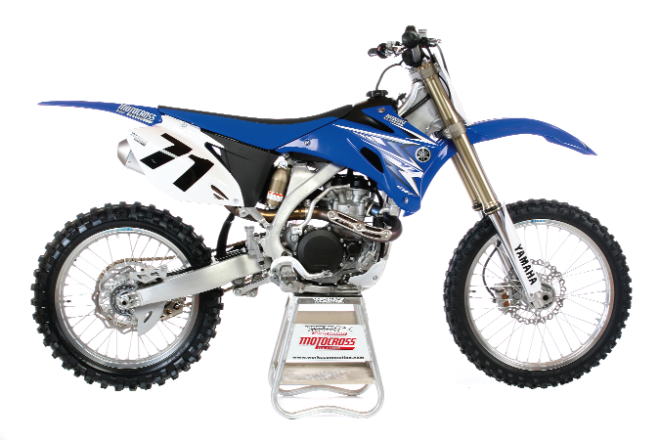 The 2009 Yamaha YZ450F is a kinder, gentler, 450cc four-stroke. Too kind and too gentle for our tastes. Yamaha’s crackpot muffler detunes the 2009 YZ450F to the tune of five ponies less at six grand and three horses less at peak (compared to the class-leading KTM 450SXF). It’s hard to swallow the idea of a race bike with an econo-box engine.
PLUSES: Great suspension, superb reliability and spot-on jetting.
MINUSES: It’s slow and it has an irritating push in the center of the corners.
Click Here for the full test Sometimes the baby goes flying out the window with the bath water. The 2009 Honda is all-new, but it isn’t all-good. In stock trim, the 2009 CRF450 oversteers, has a stinkbug stance, flattens out at 8500 rpm, has soft forks, weak clutch and offers no bite in the front end. We think that it has the “greatest two-thirds of a powerband in the class.” The other third is the problem.
PLUSES: It’s got throttle response to die for, a bigger airbox and weighs 226 pounds.
MINUSES: The 2009 CRF450 needs more top-end power, stiffer fork springs, more damping in the forks, a flatter profile, stronger engine and calmer steering response. 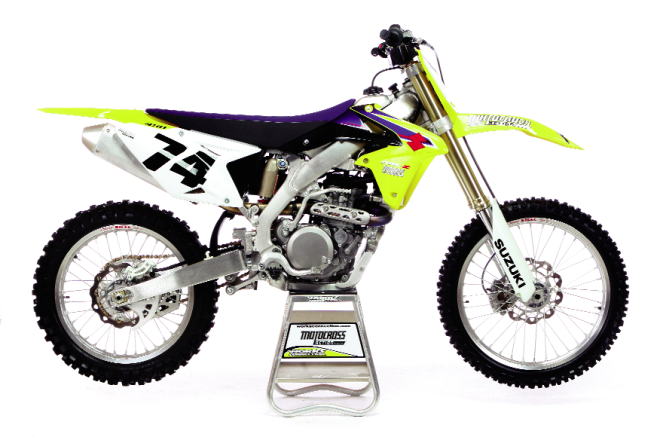 With its super-steep head angle, the Suzuki can dive to the inside in any turn, carve with precision through the most daunting of ruts and track like an arrow on flat terrain. For these attributes, you pay a price in straight-line stability. The power is very good down low, average in the middle and nonexistent on top. The RM-Z450 rev-limiter kicks in an 10 grand (and does its job by 10,001 rpm). We think that the RM-Z450 is under-rated, but since we are the ones rating it–that probably isn’t true.
PLUSES: Thanks to its celebrated handling, the Suzuki holds the honor of being the best handling 450.
MINUSES: Lack of over-rev, undersprung forks, overly aggressive rev limiter and mediocre horsepower.