Remember KTM motocross bikes back in 2004? They looked different from the “Big Four” Japanese brands, and not in a good way. They were, and still are, considered different, but the tables have turned over the last 16 years. When you saw a KTM at the track in 2004, you were probably intrigued by the orange steed, but also felt sorry for the poor lad who paid a premium for a bike that was subpar to the green, yellow, red and blue bikes. The mid-2000 KTMs had issues. They handled like a wheelbarrow, were not reliable and didn’t have a very large dealer network. What they did have in spades was uniqueness. They had a cult following in off-road racing and were praised for their powerful two-stroke engines. 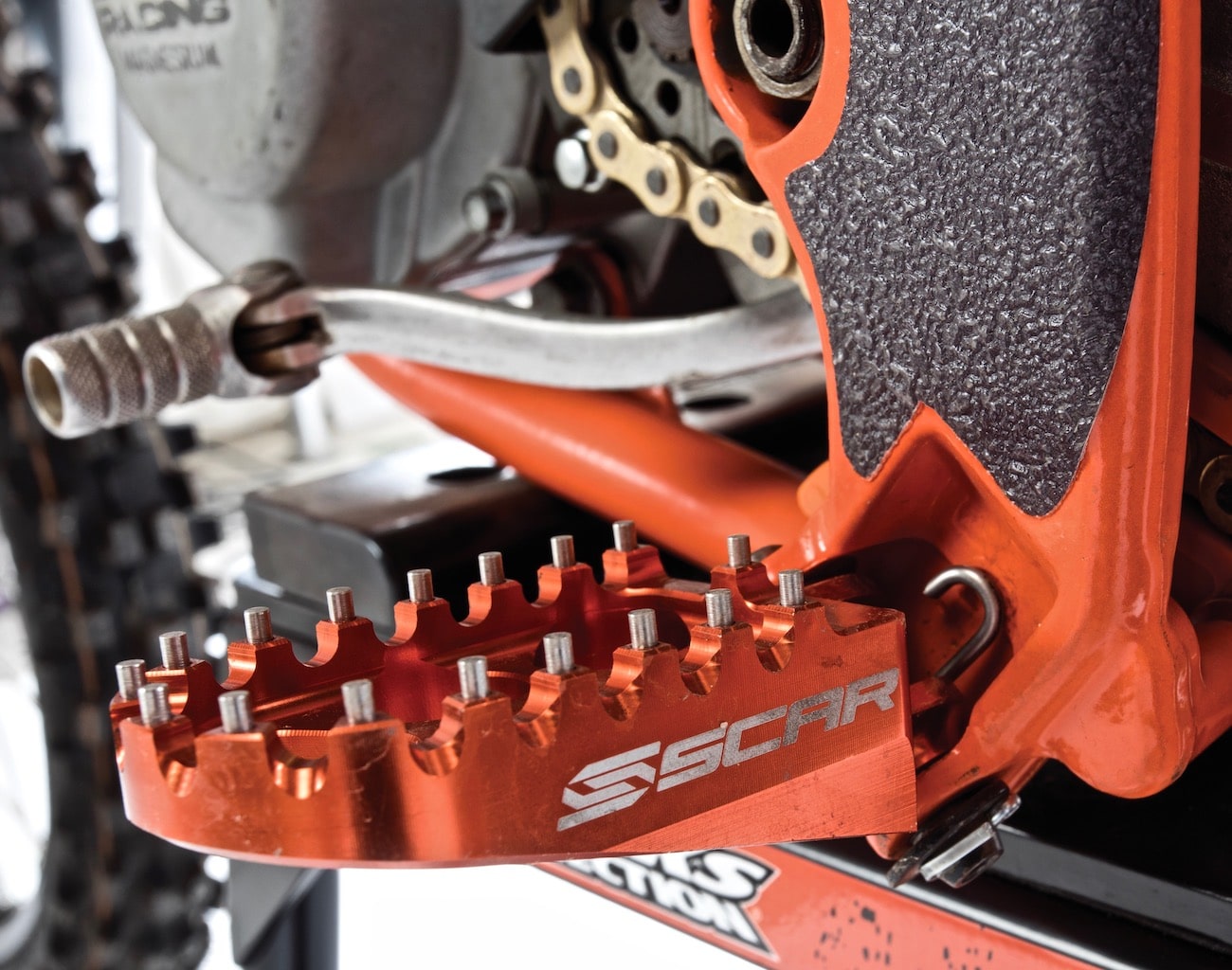 Few people remember it today, but Zach Osborne was KTM’s golden child. His parents owned a KTM dealership in Virginia called Champion Motorsports. The family bled orange from the start. With Zach’s raw talent and the Osborne family’s connection to KTM, it was the perfect formula for success. With the KTM 65SX coming out in 1998, Zach jumped on board the bike a year later in 1999. Because of Zach’s speed and results, KTM wanted his input to improve their bikes. Zach became KTM’s mini-cycle marketing man; his results attracted mini dads to the orange bike for their kids.

When it came time for Zach to jump up to the 85cc class, there was no KTM 85SX for him to race. KTM wanted a longterm relationship with Zach, so they proposed a plan. Zach would ride Suzuki RM80s while helping develop the first KTM 85SX. “I became like the KTM prodigy kid,” Zach told us, “and KTM invited me to go to Austria to test stuff for the KTM 85SX at the end of 2002.” 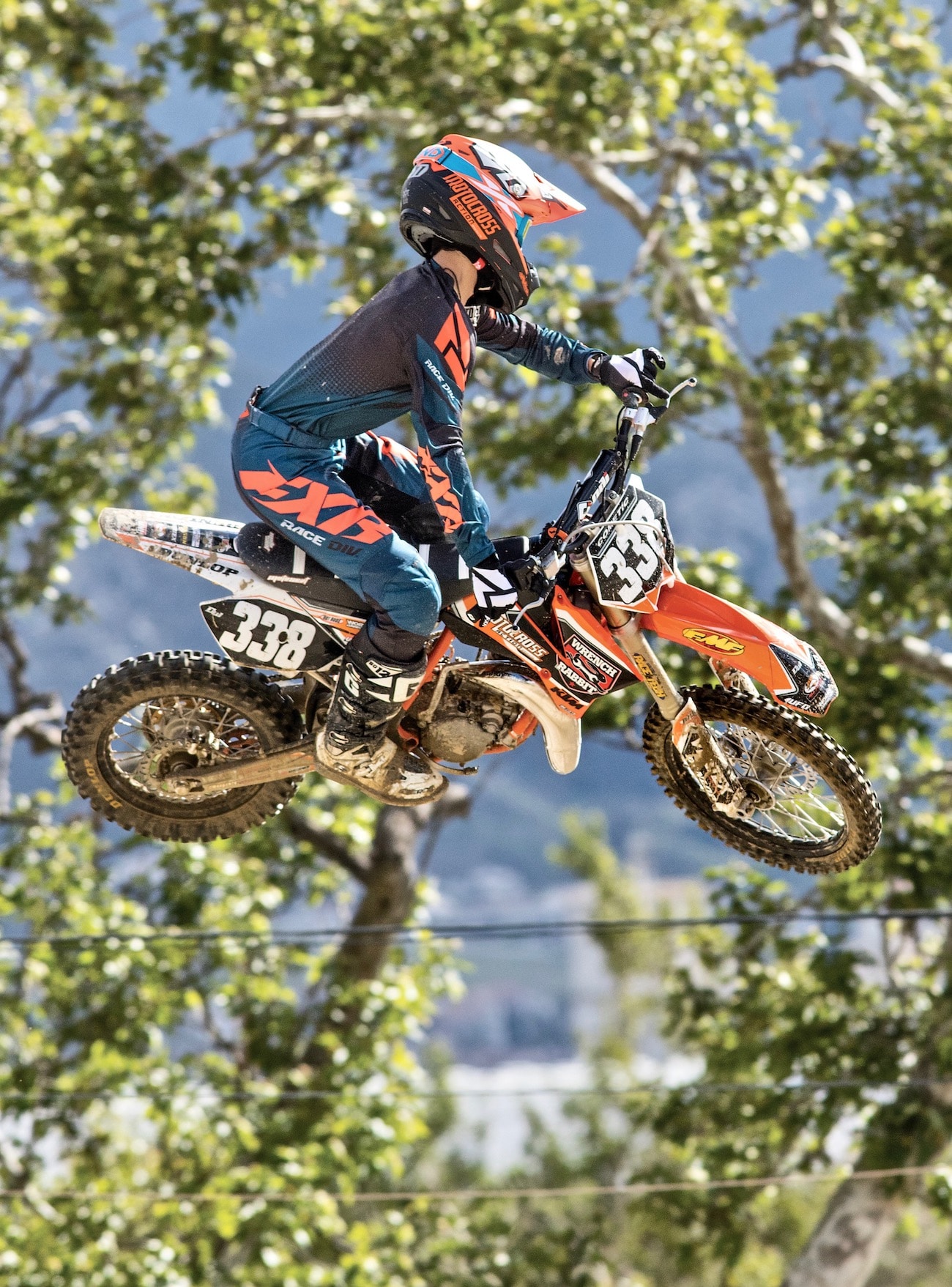 The KTM 85SX was released in 2003, but not in time for Zach to race the first big Amateur National in Lake Whitney, Texas. So, KTM improvised. Zach said, “The first time I raced the KTM 85SX was when we went to race at Lake Whitney back in 2003. KTM shipped two 85SXs that were basically prototypes from Austria to California and then on to Lake Whitney for the race. I wasn’t even sure they would be there when we arrived. KTM just said, ‘You’ll have two new bikes when you get there.’ The bikes arrived the day before practice, and it was the first time I got to race the bikes. I remember the bikes were so good straight out of the box, and we were super successful on them. They were super smooth and something I enjoyed riding. The bikes were so good that KTM didn’t make that many changes to them until three years ago. I still have two of my KTM 85s that I won Loretta’s on and the 2004 Junior World Championships in Latvia.” 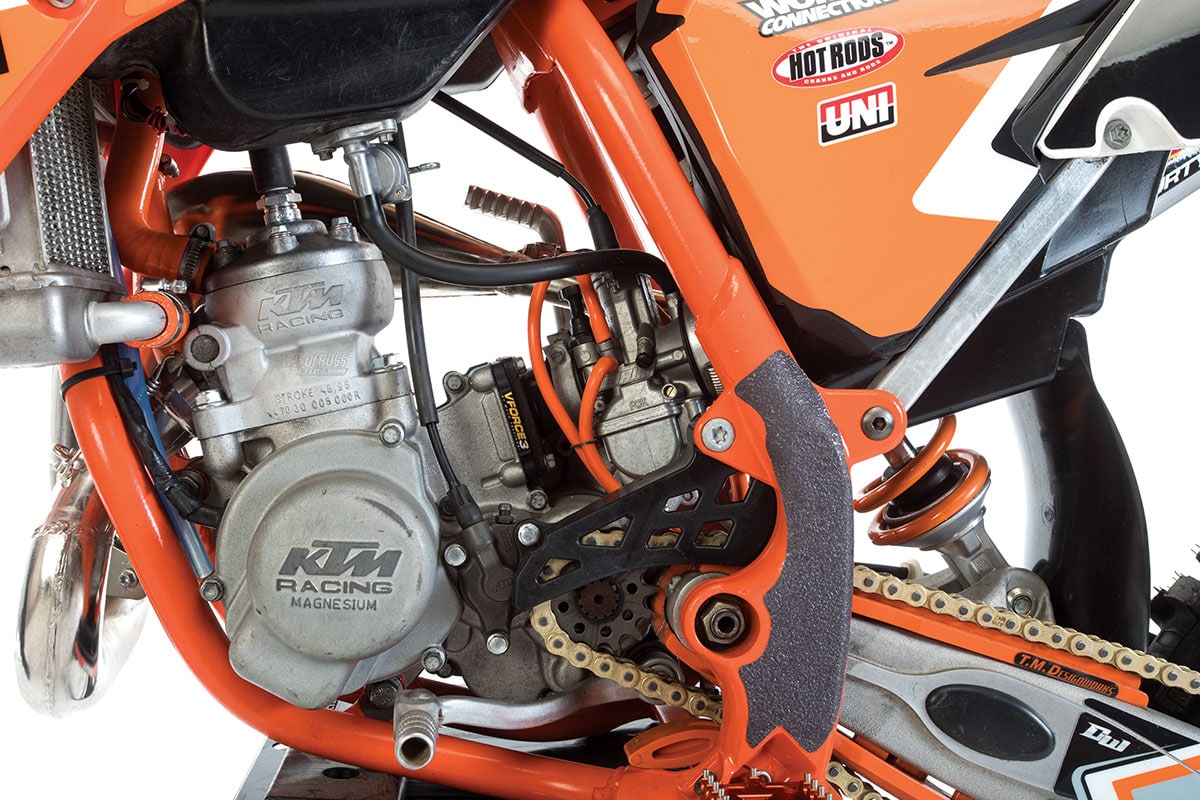 When we first saw the 2004 KTM 85SX, it was in pieces. We knew it would be a challenge to bring it back to life. It was little more than a piece of junk. The naysayers asked, “What’s the point of rebuilding a 16-year-old KTM minicycle?” But the Zach Osborne connection made us want to see if we could bring together all the parts, know-how and people to help us build a better-than-new 2004 KTM 85SX.

Our goal wasn’t to make it a fire-breathing dragon. We just wanted to get the bike running as well as it did 16 years ago. That took a lot of TLC and a complete engine rebuild. The KTM 85SX cylinder was fried, and the engine was worn out. We had Jay Clark send the cylinder to Millennium Technologies and ordered a full Wrench Rabbit kit to get the engine back together. The Wrench Rabbit kit was handy because we didn’t have to scour the parts shelves of every KTM dealer west of the Mississippi. Wrench Rabbit offered all the parts we needed for a bottom and top-end rebuild, all under one part number. Since the bearings were rusted and the seals dried out, we replaced all the old stuff with new Pivot Works bearings and seals. We replaced the frayed cables with All Balls Racing cables. Amazingly, this was all it took to rebuild the engine, save for bolting on an FMF pipe, the Millennium-restored cylinder and a new VForce reed cage (as it came with one in stock trim back in 2004). 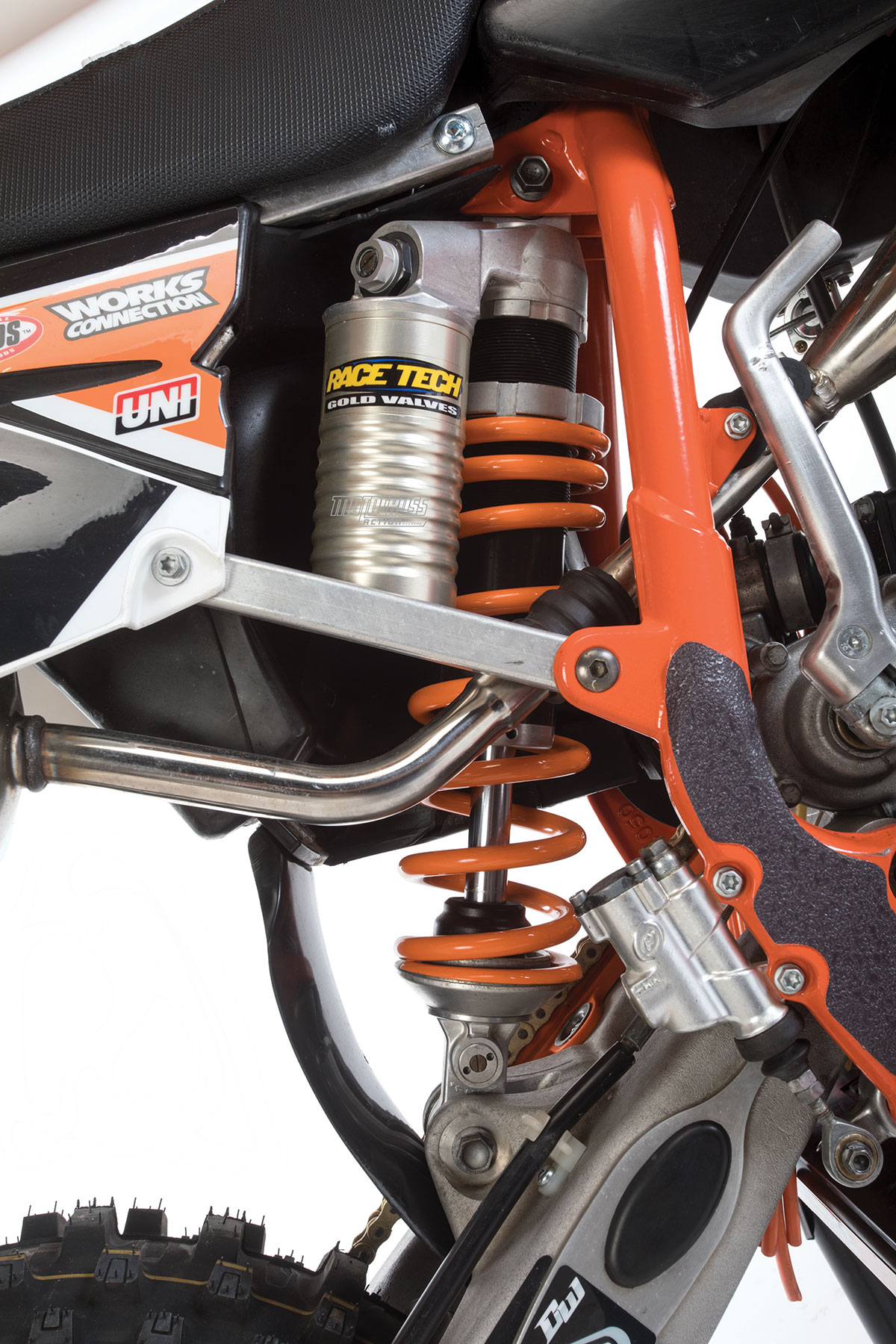 A handy tool that we use a lot is the complete catalog of jetting specs found on the Pro Circuit website. It gives you the stock jetting, along with what jetting Pro Circuit recommends. It saves a lot of time on the older bikes by getting the jetting in the ballpark. From there you can fine-tune it.

As you can imagine, the 16-year-old WP suspension was in bad shape. We have had great luck with Race Tech rebuilding and re-valving old suspension. Race Tech refurbished our KTM suspenders and added some of its own special sauce. So what did our project KTM 85SX cost to rebuild from a pile of rubble? Around $3000. A lot of elbow grease and money went into turning that hunk of junk into a thing of beauty, thanks to Decal Works for the finishing touches. As for the answer to the question, “What’s the point of rebuilding a 16-year-old KTM minicycle?” We did it to see if it could be done, not because we think it will sell for thousands of dollars at next year’s Mecum Auction. We just wanted to prove that with the tools and experts available in the motorcycle world today, you can turn your dream bike, even if it’s a hunk of junk, into something to be proud of. HOW DID IT RUN ON THE TRACK?

The MXA test riders didn’t just fall off the turnip truck. First and foremost, they are skeptics. They also didn’t see any reason to go out on a modern motocross track with a 16-year-old mini-cycle. But, we convinced them by pointing to the track and saying, “Git ’er done!” Surprise, they stayed out longer than we expected, and when they came back, it was to get more gas. They had smiles on their faces. After our first test rider came back giggling about how much fun the 2004 KTM 85SX was to ride, even the 185-pound 450 test riders lined up to take it for a spin. 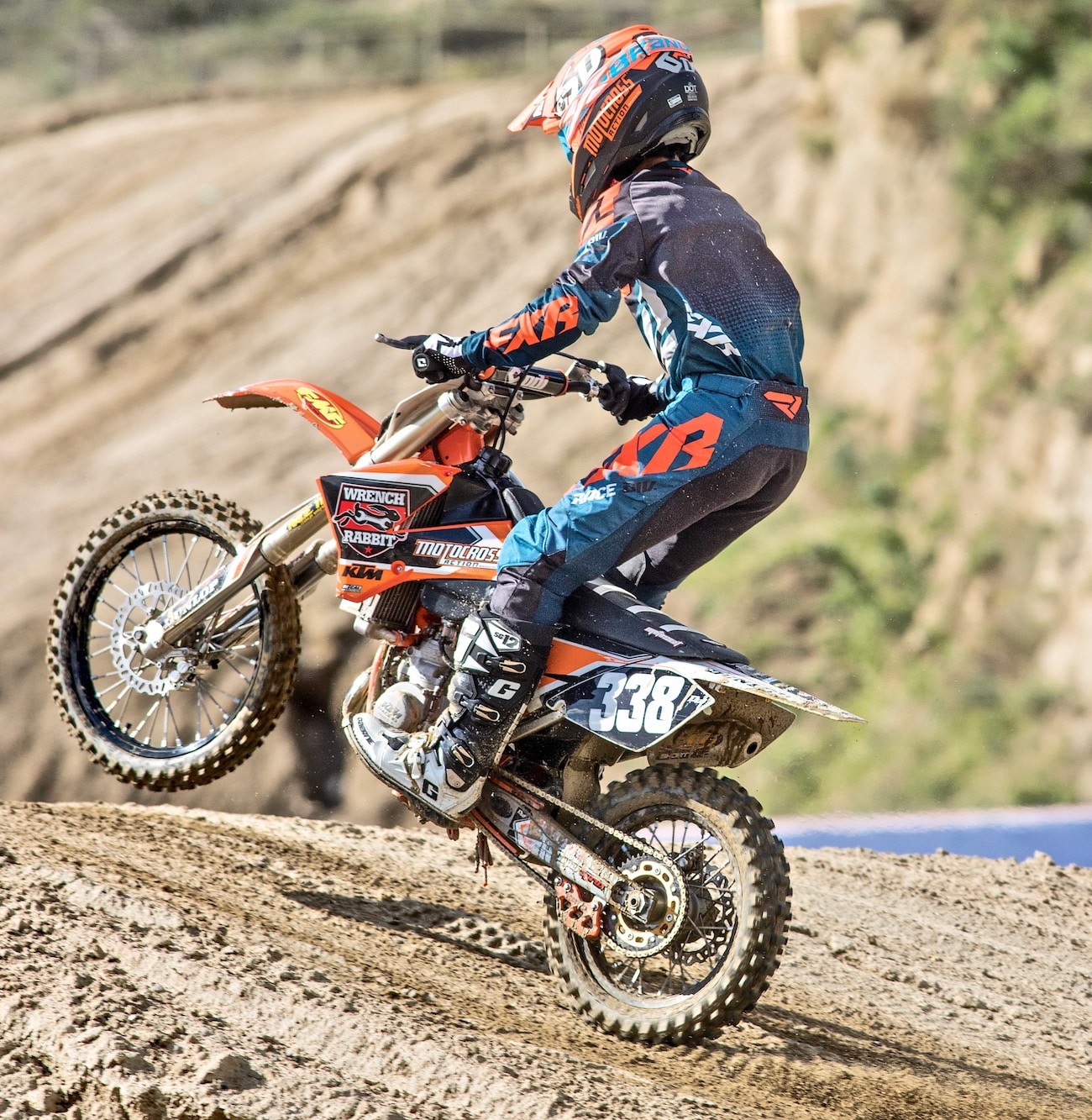 The bike was nothing but fun. The power was strong and surprisingly broad. The suspension was ultra-plush, and the controversial, no-link, PDS rear suspension worked great. Every test rider left the track that day with an appreciation for a mini-cycle that was genuinely underrated in its time. Only Zach Osborne was smart enough to recognize how good it really was.