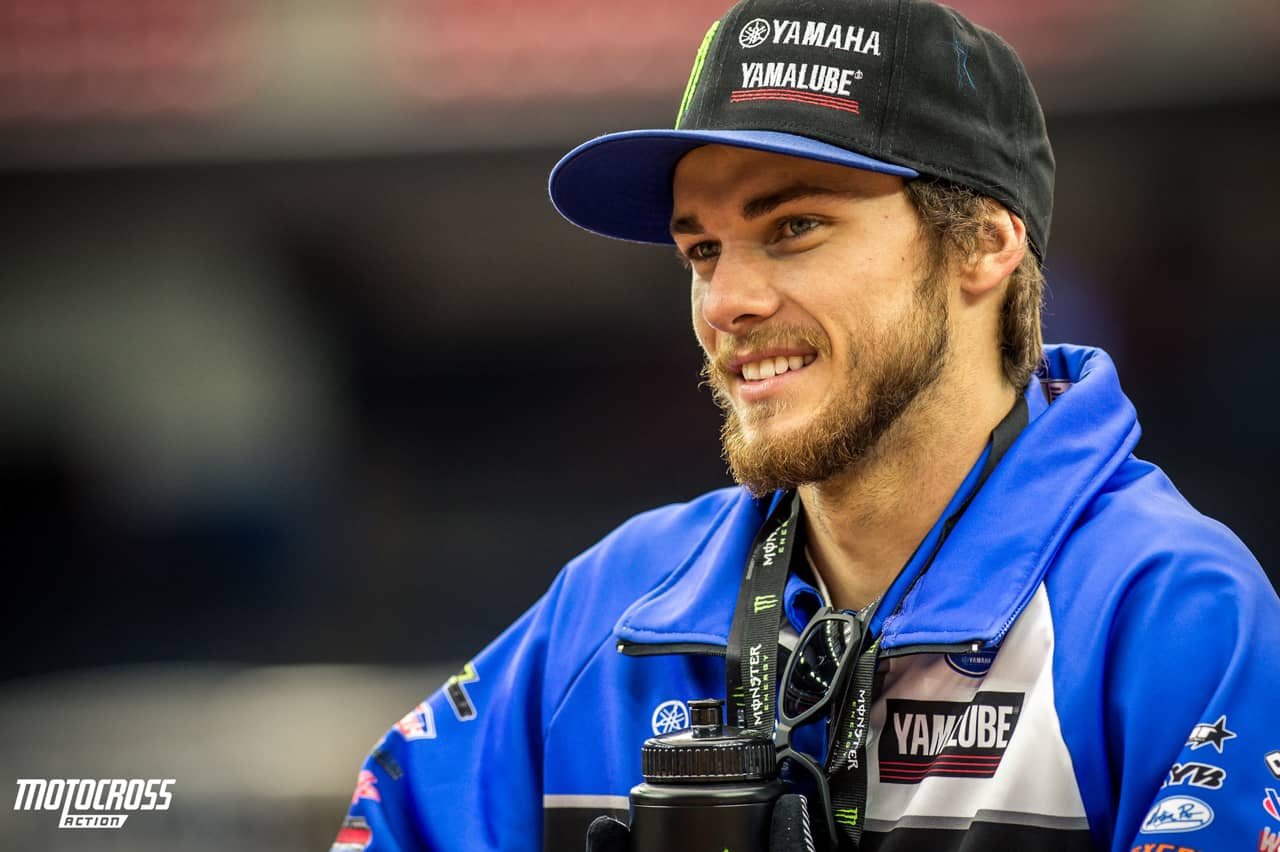 We have a feeling that the 2018 250 Supercross West series is going to be an epic battle. To begin with, you have Justin Hill the defending champ who wants to retain that number 1 plate. Maybe Hill has struggled in the opening rounds; he did the same last year before catching fire. along with the defending champ, you have Red Bull Troy Lee Designs KTM rider Shane McElrath, and Monster Energy Pro Circuit Kawasaki’s dynamic duo of Adam Cianciarulo, and Joey Savatgy who both feel past due for a 250 title. Then you have the Geico Honda teamates of Chase Sexton, and Christian Craig a slight step behind. In my way of thinking, Plessinger, Savatgy, Cianciarulo, and McElrath are all out to prove they deserve the title. They all want to move up to the 450 class. But right now, Plessinger is the rider to beat! We caught up with the current points leader when he was taking a rare break from training.

CONGRATULATIONS AARON ON YOUR HOUSTON RACE; THAT WAS A DOMINATING WIN Yes, It was definitely fun to race. I got off to a really bad start and had to work my way through the pack, but fortunately I was able to make up a lot of ground in the whoops, and make a lot of passes. It was crazy that I was catching those guys so much and still does not feel real. When I started catching them like that, I just said to myself just stay calm and do what you do, and I came away with a win. It was a surprise and hopefully we will do it again this weekend.

I DID NOT SEE THAT RACE, BUT EVERYONE TALKS ABOUT HOW DOMINATING YOU WERE! Yes, definitely. Actually, in the first corner, I think I was 19th or something like that. You can see on TV that I was the next to last guy going around the first corner. I just said, “oh here we go another bad start”, but I just put my head down and did not freak out.  I just kept charging, everything just clicked, everything was going good, and it seemed like nothing could go wrong. My bike felt great, and I felt great too. I was not getting tired at all. When I actually got into the lead, I just calmed down a little bit, and I think my last times were 55’s coming through the pack. And then once I got around Joey, I calmed down a little bit more, and started to run away. You know I think it was awesome. That was my biggest win, and I think I rattled everybody up a little bit.

AND STARTING OFF THE SEASON AT A1 YOU LOOKED GOOD. I definitely feel a little bit different this year confidence wise, and my focus is there. I feel like I am in a mentally good spot for this. I am all there this year; which last year I was lacking a lot of that. I just focused on that in the off-season and put in the work; I feel better than ever right now. YOU WERE SLATED TO RIDE THE EAST COAST SX SERIES RIGHT? Yes, actually, the second year I was pro in 2015, I was West Coast and in 2016, I was East Coast. Then last year, I was West Coast, and this year I am West Coast, but I was actually projected to be on the East Coast. Colt Nichols got hurt, so that put me right on the West Coast. I had to step my training up a little bit quicker than I wanted to, but you know, it was for the better now. YOU WON’T FEEL ANY EXTRA PRESSURE THEN WITH NOW HAVING THE POINTS LEAD AND THE RED PLATE?  No I won’t; think that is a mistake a lot of people make.  They put extra-added pressure on themselves just because they have the Red Plate.  It is definitely a big thing to have, but I don’t think it is added pressure.  As long as you know you are going to do well and keep your focus on the points you are going to do what you need to do. That is what I am going to do this weekend, just let it come to me, not try to fight the track, and hopefully it works out.

YOU GENERALLY RACE PRETTY CLEAN, BUT IF SOMEONE MESSES WITH YOU, YOU RETALIATE RIGHT? Oh yeah definitely. I will not start anything; I am not that kind of guy unless somebody does it to me.  There is going to be no friction or touching on the track.  I like to keep it that way.  I mean we are all out there to have fun, not let our emotions get to us, and that is what I am going to try to do. I am going to try to get out front and get away from those guys so they do not have a chance to get near me.  I have been working on my starts, I have them down now, and I am super confident coming into the weekend.

SOME RIDERS SWITCH UP THEIR RACE STRATEGY WHEN THEY HAVE THE POINTS LEAD, AND TRY TO ‘PROTECT’ IT. WILL YOU DO THAT? I am going to just focus on getting out front and riding my own race, you know?  I proved to be that I am the fastest guy on the track. I am just going to play it like I have been playing it, not any safer or any more risky. Just do what I need to do out there, and win the race.

I AM NOT CERTAIN WHERE YOU ATE AS FAR AS 250 SUPERCROSS, AND POINTING OUT OF THE CLASS. WHAT ARE YOU THINKING ABOUT 2019?EVERYONE WANTS TO SEE YOU ON A 450.  This year is actually my last year on the 250’s. Obviously, I can back the title up if that comes to it, but this is projected to be my last year on a 250. I know some teams are talking, and if the right deal comes along, and I feel comfortable doing it, I will make the move. Then in 2019, you will see me on a 450, but if I feel comfortable with riding a 250 for another year or if I get this championship; it is pretty much all up to me. 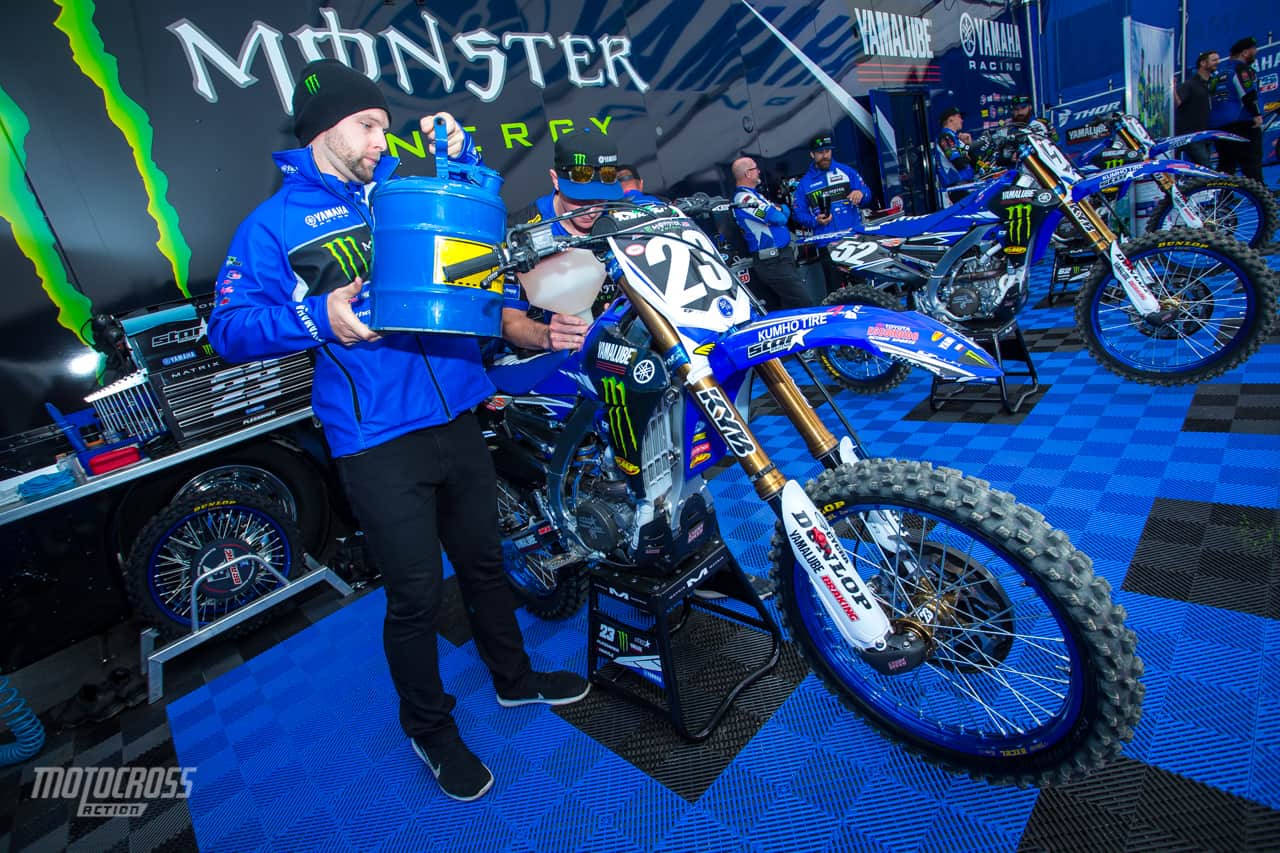 GETTING THIS CHAMPIONSHIP WOULD BE OBVIOUSLY A HUGE DEAL; IF YOU WON, WOULD STAY AND DEFEND OR MOVE UP?  If I feel comfy, and I like the 250, I will probably do another year and stay in the 250 class and defend my title, but if another deal comes around and I feel confident and comfortable taking that, I might just take that. You never know and it is something to think about for me. I will definitely think about it these next few weeks because I think a lot of people are going to come to me and ask what I want to do. But I have to stay on the comfort side, and stay where I am doing well.

YOU HAVE BEEN IN THE 250 CLASS FOR A FEW YEARS NOW, ALONG WITH MCLRETH, SAVATGY, AND CIANCURELO. I IMAGINE IT IS A HUGE IMPORTANCE FOR ALL YOU GUYS TO TAKE THIS TITLE. Oh yes, we will definitely put it all out there!  We are going to try our best and it is going to be a tough championship to win, but I think that I can pull it off.  I feel really confident and my starts are getting dialed in now. I am going to keep my mental side the way it is and go at it really confident; I think I can pull it off.

ONE LAST TOPIC AARON, WHAT DO YOU THINK OF THE 450 CLASS SO FAR? Sure, definitely I think Jason Anderson is riding great. He is going to be a tough one to track down, but you know Ken Roczen is right there. He has had it rough so I imagine he is putting everything he can into this championship.  I saw Justin Barcia at the test track and I knew he was going to be one of the guys.  He is riding so good at this track and if he can keep confident and keep his head level, I think he will be definitely one of the guys to even hold the Red Plate during this season.  Those are the top three guys right now since Marvin and Eli are out.  It is going to be a tight race for sure. Roczen is just going to improve the whole season and he is going to be really fast, faster than he is right now.