Two Supercross rounds in, ten points behind Championship leader Justin Barcia, and tied with Adam Cianciarulo for third is Jason Anderson. After a rough Supercross Championship defense in 2019, when a practice track crash sidelined his supercross season only three rounds in, the 2018 champ is using his relaxed attitude to make his way back up to speed. After his third place in St. Louis, we grabbed Jason to pick his brain about how his Supercross season is going after two rounds.

JASON, CONGRATULATIONS ON YOUR THIRD IN ST. LOUIS. DO YOU FEEL THE SEASON IS STARTING OUT WELL? Yes, it seems alright. I got a fifth the first round and a third tonight, so I am just trying to work my way up. I feel like I had a pretty mellow race out there, but I am just trying to get better, you know. With having a year off, and then getting back into Supercross racing, it is a little intimidating. But I am getting better and I feel like I just need to get that racing intensity back, so I can battle with those guys and really charge.  I feel right now that I am riding good, but I am just riding, if you know what I mean? I believe that charging style will come back as the season goes on, but right now I am in a good spot. I am just going to try to keep pushing forward, and first and foremost just enjoy it, have fun, and be out there. Jason Anderson was up front on the start in St. Louis, but Ken Roczen jump passed him in the first rhythm section when he tripled and Jason doubled.

YOU HAD A DECENT START, BUT STILL YOU HAD TO PASS A COUPLE OF GUYS TO GET UP ON THE PODIUM. CAN YOU TALK ABOUT THE BEGINNING LAPS? In the first couple of laps, I got passed, and the next thing you know, I was behind (Justin) Barcia, (Adam) Cianciarulo, and (Zach) Osborne. Those three were just going at it, so I let them do their thing, and passed the ones that I felt that I could make clean passes on. Then I ended up being able to get myself separated and roll it into a third-place finish. Jason Anderson was injured after Anaheim 2 in 2019 and he didn’t return to racing until the Pro Motocross series started up at Hangtown in May.

“I need to build up my base a little bit more because I lost a little bit not doing last year’s Supercross season as far as Supercross fitness. But we will go ahead and just keep plugging away. I feel like maybe I am behind where I would like to be as far as riding. Last year put a little damper on it, but we are cruising now, and enjoying it.” Jason has taken the pressure off himself knowing that he can do better if he’s focused on having fun.

I AM REALLY HAPPY THAT YOU REPRESENTED THE U.S. AT THE MOTOCROSS OF NATIONS, BUT DID THAT SET YOUR SUPERCROSS TRAINING SCHEDULE BEHIND? It was a tight time restraint, but me and my friends went over there and had a kick butt time checking out the European lifestyle, so it was good, and we kept it light. Obviously, the race at the Nations was not what we wanted, but at the same time it was a learning experience and made memories that we will look back on for the rest of our life. Overall, I just enjoyed it. 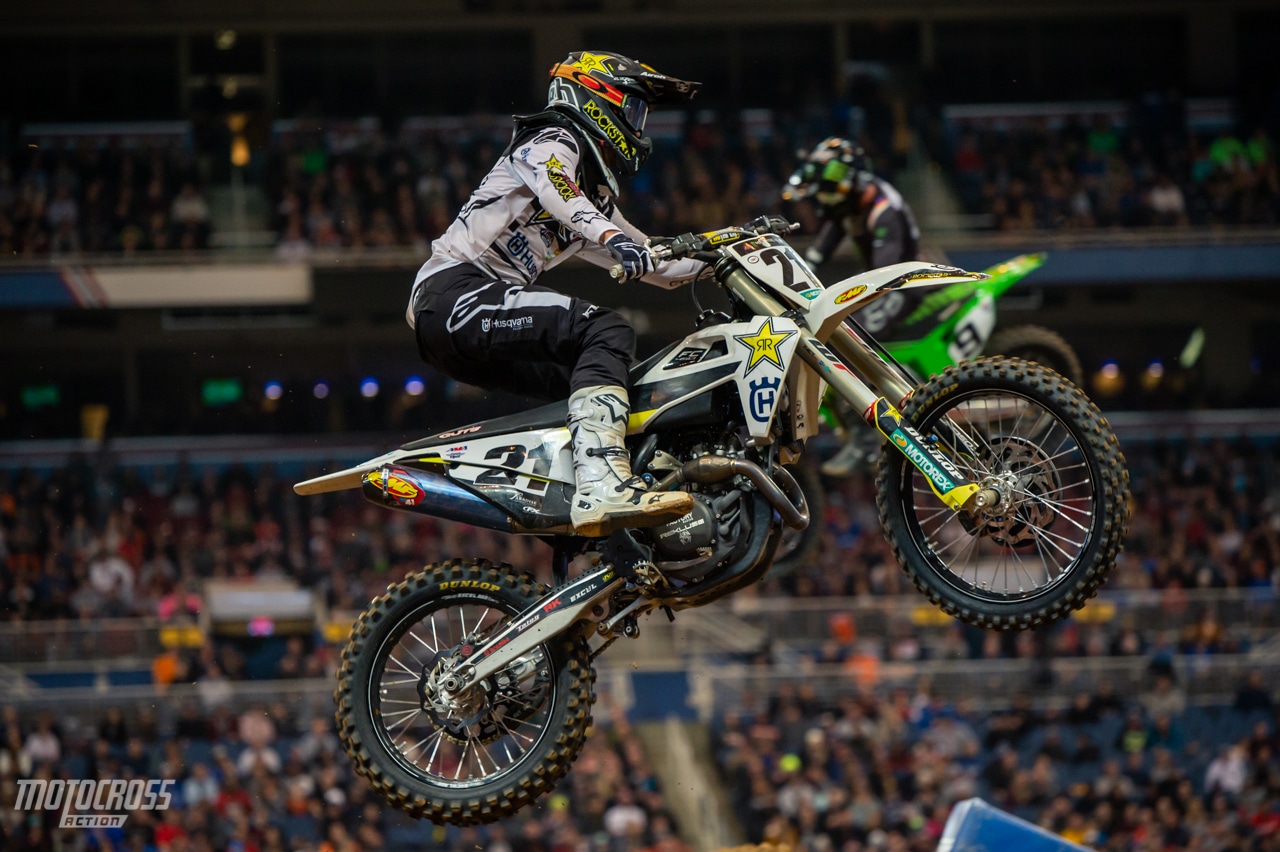 Jason hasn’t been involved in any major battles for race wins yet, but he still is right where he needs to be in the points chase. He’s currently tied with Adam Cianciarulo for third place, only ten points behind Justin Barcia.

WE’VE ONLY HAD TWO SUPERCROSS ROUNDS SO FAR, DO YOU FEEL GOOD WHERE YOU ARE AT, OR HAVE YOU IDENTIFIED ANY AREAS TO IMPROVE ON? No, not really, I just need to keep enjoying myself. I’ll try to keep the racing good, keep my lines, the bike in control, and just try and stay up there in the top three. On any given night, if it is presented to me, of course I’ll try to get that win. I need to build up my base a little bit more because I lost a little bit not doing last year’s Supercross season as far as Supercross fitness. But we will go ahead and just keep plugging away. I feel like maybe I am behind where I would like to be as far as riding. Last year put a little damper on it, but we are cruising now, and enjoying it.

RIDE WITH KEN ROCZEN AS HE BLASTS TO THE FRONT IN THE 2020 ST. LOUIS SUPERCROSS MAIN