Certainly, one of the highlights of the recent Motocross of Nations at Red Bud was Jorge Prado. Not only did the Spanish teenager take the top spot in the MX2 class, he wrapped up his first championship one week prior. As a part of the dominant Red Bull KTM team Prado recently moved to the Italian based De Carli squad, which is a “team within a team,” also hosting 8 time World Champion Antonio Cairoli. His success at Red Bud should be no big surprise as in his very first MX2 race he was battling with Jeffrey Herlings. After the MXON day was done, we tracked down Jorge Prado to learn a bit more about him.

JORGE, WOW, WHAT A GREAT SEASON FOR YOU. YOUR TEAMMATE PAULS JONASS DID ALL THE WINNING IN THE FIRST PART OF THE SERIES, BUT THEN THAT FLIP-FLOPPED, AND YOU WERE THE DOMINANT GUY. Yes, in the beginning at the first few races, Jonass won every single moto. He did not win by a far margin though, so I was not really worried about that. He was just winning, but like in Holland, I got to the finish line not even one second behind him, so he did not really have so much speed compared to the other guys. He won those first three races, but after that I started picking up some good finishes, and some good speed as well. I was getting better, because I started out the season injured. After those initial races everything got way better. IF YOU LOOK AT THE FINAL POINT STANDINGS, YOU HAD 100 POINTS OVER THE NEXT GUY. Jonass and I were definitely the two best guys in the 250 class this year. We fought during every single race, so we were clearly the best two.

YOU SWITCHED TO THE ITALIAN BASED DE CARLI RED BULL KTM SQUAD THIS PAST WINTER, IT APPEARS THAT IT WAS A GOOD MOVE. Yes, it was a good change for me, especially for training preparation. Also, while we were at the races throughout the season, we became way more competitive. We are really a family, so we support each other a lot. This year was where we made good friends, so I am very happy with this change. I’ll stay here now, and it was a great change for sure. I CAN STILL RECALL YOUR PRO DEBUT AT ASSEN IN THE NETHERLANDS BACK IN 2016. IMMEDIATELY YOU WERE CHALLENGING JEFFREY HERLINGS! Yes, Assen was a good race that year in 2016. It was my first ever GP race and it was a sand track, so it was really good for me, and also good for Jeffrey who is a really good sand rider. I had a good start, it felt really good there, and I was very happy. It was a really, really good weekend for me. I was very comfortable in the sand. If the conditions, were different maybe I would not have fought with him longer, but in the sand, I could hold him for a couple of laps. It was good. I WAS AT GLEN HELEN THAT YEAR WHEN IT WAS THE FINAL GP, AND REMEMBER YOU WERE PRETTY OVERHEATED. WAS THAT SOMETHING THAT YOU NEEDED TO WORK ON? Yes, that is definitely true. Last year I was training a lot when it came to really hot races, and this year, I have improved in that. Actually, this year, I won every single hot race, so I improved a lot in that. We are making really good steps.

I do have interest in Supercross. Initially I thought for next year, that I would race Supercross because it was something that I really want to do.

DID YOU DO ANYTHING SPECIAL TO CELEBRATE YOUR WORLD CHAMPIONSHIP? After the races on Sunday I could not do much. I went straight to Spain, and then had two days full of interviews on TV shows there. So, I was pretty busy, and after that, I just flew straight here to America. I did not really have so much time after that. THAT’S RIGHT, YOU ARE THE FIRST WORLD MOTOCROSS CHAMPION FROM SPAIN! It is the first time that a Spanish guy won one of the two most important classes, like MXGP, or MX2, and that was really good for the motocross riders in Spain. For sure now, the kids that ride motocross will try to get into the GP’s and try to improve because they saw that it was possible from a Spanish guy. For sure, more people will start riding motocross because they started knowing the sport better, and it is really good for motocross in Spain, for sure.

MANY MAY NOT REALIZE THIS BUT YOU WERE STILL ATTENDING SCHOOL WHILE YOU WERE RACING LAST YEAR. Yes, last year, I was still going to school, and still studying, trying to do my best at school. It was a hard season. This year, I was finished with school, and could focus more on motocross. Last year, I struggled a lot with some races where I was just really tired of all of that. Now I can rest and train more, so it is very important in this sport to rest and to train. YOU SPENT SOME TIME IN CALIFORNIA A COUPLE YEARS AGO AND WERE SEEN AT SOME SUPERCROSS TRACKS. DO YOU HAVE ANY INTEREST TO RACE SUPERCROSS? Yes, I do have interest in Supercross. Initially I thought for next year, that I would race Supercross because it was something that I really want to do. But after I changed teams to the De Carli side I really feel like it’s family, and I feel comfortable in Europe. I started enjoying it even more, and I am feeling really good. But ever since I was a small kid, my dream was to come and race Supercross. Now, this has changed a little bit, and I see now that the fastest guys are in the MXGP class in Europe, like Tony. I am not saying that the American guys are slow, but we have Jeffrey and Tony. They are the two fastest in the world, so if you want to be the fastest, you need to go compete with them. That gave me some reasons to stay in Europe, to try and beat those guys.

WHAT WOULD BE THE KEY TO DEFENDING YOUR CHAMPIONSHIP? Keep training hard, and I think that is it. I will do the same program as this year. We will improve in many things or try to improve and just do my best. 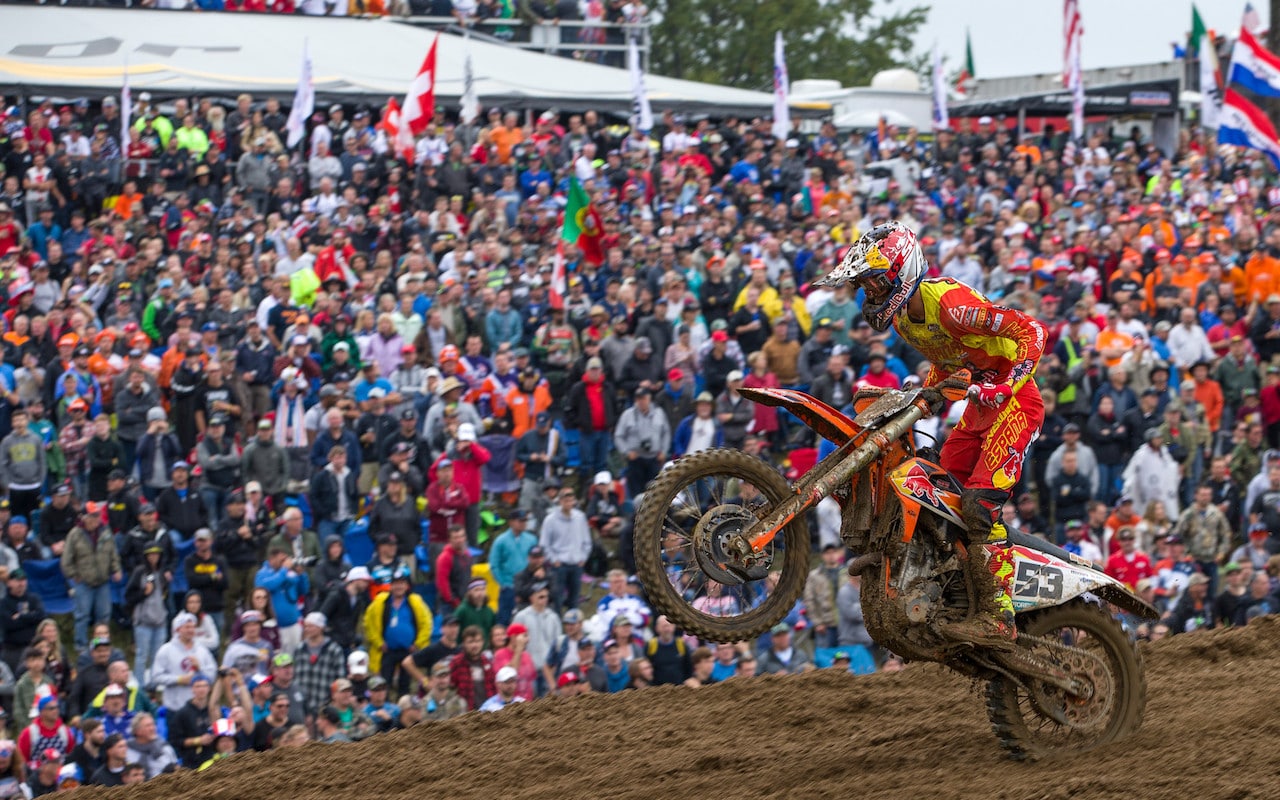 LET’S WRAP UP WITH THE RED BUD MOTOCROSS ON NATIONS WHERE YOU WON THE 250 CLASS.
It was a very good race for me. In the first moto, I was leading the MXGP guys for 20 minutes, so it was quite cool. I finished 3rd in both my moto’s, and overall 1st in MX2, so it was a great weekend. The track was quite muddy. Not the best for me, but we could not do anything to change that. The weather was not great, but it was still okay for how much it rained the last few days.