MXA INTERVIEW: JUSTIN COOPER IS ON THE VERGE OF SUPERCROSS STARDOM 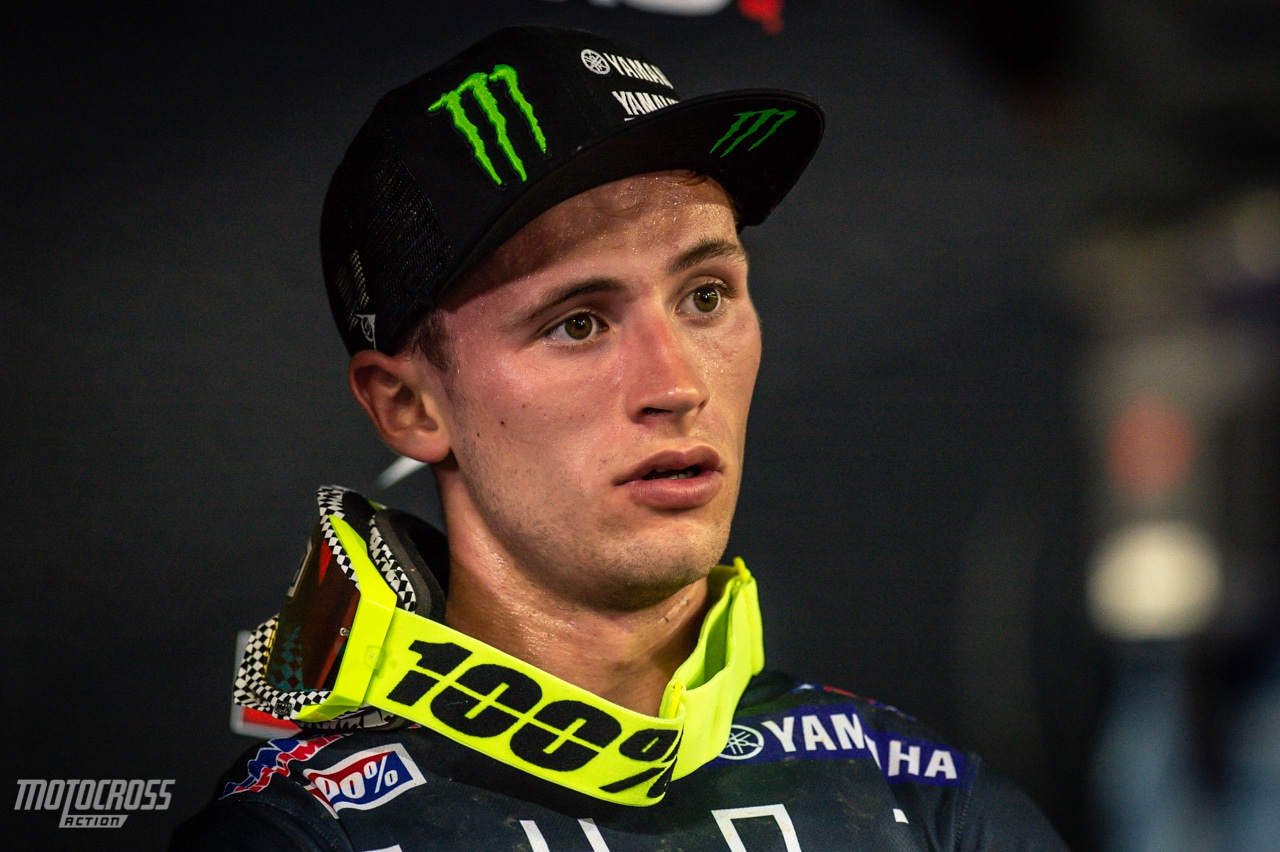 JUSTIN, THE HEAVY TOPIC HERE IS THAT YOU’RE NOW TOTALLY IN THE HUNT FOR THE AMA 250SX EAST SUPERCROSS CHAMPIONSHIP. DID YOU EXPECT TO BE BEFORE THE EVENTS IN NASHVILLE? Honestly, no. It was kind of a surprise to see Austin Forkner go down and out like that. It definitely put a lot of emphasis on the night show and, yeah, it’s cool to be in this position now with two races left I’m looking to go fight for it.

YOU’VE HAD AN EXCELLENT SEASON FOR BEING SO NEW TO SUPERCROSS AND NOW YOU’VE GOT NOTHING TO LOSE, SO IT’S TIME TO MAKE A RUN AT THE TITLE. Exactly. I’ve kind of been a podium guy all season. I want to get a win. Another win will get me closer to that championship. I mean the goal right now is just to go out and win the next round. It’s my home race and I’m really looking forward to that. It’s cool to be in this position and it’s looking like it’s all going to come down to Las Vegas.

YOU’VE BEEN CONSISTENT SINCE MINNEAPOLIS, YOU’VE GONE 3-2-4-5-3-3-3. THAT’S AMAZING SINCE YOU DIDN’T RACE A SUPERCROSS UNTIL THIS YEAR, EXCEPT FOR ONE RACE LAST YEAR? You’re right; I did only do that one Anaheim race last year. Out of seven rounds so far in 2019, I’ve been on the podium in five of the races and I’ve been in the top five in every race. That’s the key. The key is to be consistent and now it’s obviously going to come down to getting out front and getting it done. It’s good to be in this position right now and fighting for the championship.

THAT BIG HOLESHOT YOU PULLED AT NASHVILLE WAS DECLARATIVE, TO SAY THE LEAST! Yes, I went way to the outside. I was talking to the team about it and they didn’t think it was a good idea, but I had a good rut picked out and I was really confident with my starts all day. I knew I just had to get a good jump and it would be mine. I killed the start, that’s for sure.

YOUR AVERAGE START THIS YEAR HAS BEEN 7.0 AND YOUR AVERAGE FINISH IS 3.3. WHAT DO YOU THINK OF THOSE TWO NUMBERS? I’ve really been working on all of it. The whole steel grate thing is kind of new to me and it took a little while to figure out. We’ve been working on the starts a lot, so it’s good to see it paying off.

THE FORKNER INJURY CHANGED THE 250 EAST FROM A LOST CAUSE TO A WIDE OPEN RACE FOR THE TITLE. We knew that Austin was struggling. It was out of our control. The only thing I was worried about was going out there and going for the win. That’s what I’ve been searching for all season and I feel like luck just hasn’t been on my side. But yeah, we just went into the night show looking to win against whoever was on the line with us.

YOU KNOCKED CHASE SEXTON AND YOURSELF DOWN, WHAT HAPPENED THERE? Nothing was intentional. It was a pretty hectic first lap, to be honest. We were going back and forth and I just wanted to pass him back. I saw that he kind of gassed it, so I did as well and went deeper into the turn than I wanted to or expected to. We got caught up and the bikes were locked together. That’s what took us both down. It was a bummer. I was just trying to make a quick pass to get back out in front.

WELL, AT LEAST YOU GOT TO LEAD YOUR FIRST LAP OF THE SEASON. Yes and I got about half a lap in and then Chase got by me. It would have been nice to have led a couple more, but we both went down and that was that.

IT’S BEEN A LONG TIME SINCE A YOUNG RIDER HAS BEEN ABLE TO RUN SO WELL. It’s been an awesome season, honestly. It was a a good season and now, all of a sudden, it’s a possible championship season. We’re going to fight for this championship and it’s gonna go down to the wire. It’s going to be good.

CAN YOU DO IT? For sure. I’m down seven points to Austin Forkner and it is kind of questionable on whether he will come back or not. I just want to go out and try to get the win that I’ve been looking for. That’s what it’s going to take to win this championship. My goal for New Jersey next week is to win. It’s my home race and I’m going to be pumped up. I definitely want to go out and win race and then see where we are at points-wise at heading into Las Vegas. YOU’RE A SUPERCROSS STAR NOW. I know and it’s awesome.

TEN THINGS YOU NEED TO KNOW ABOUT WASHING YOUR BIKE