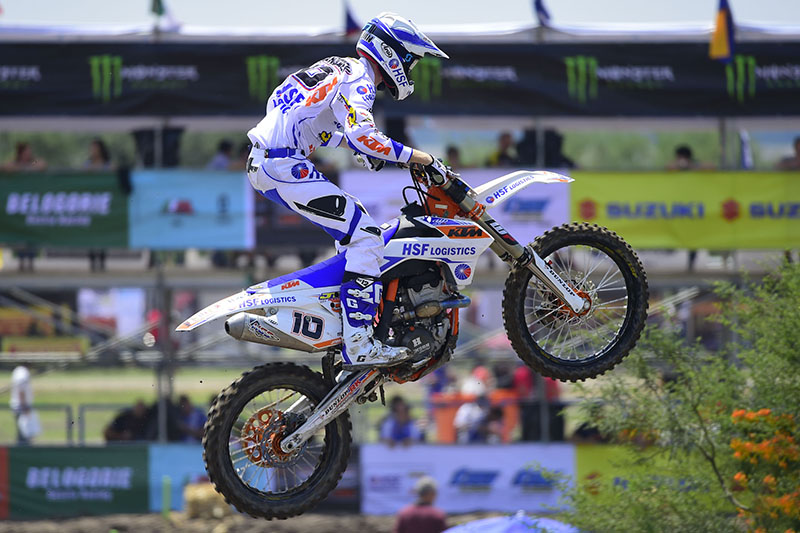 Calvin Vlaanderen may not be a household motocross name in America. Yet, he is a successor to South Africa’s Greg Albertyn, Grant Langston, and Tyla Rattray. And like his predecessors, Calvin is first focusing on a World Championship. Will he succeed? We don’t know, but in his abbreviated World Championship racing to date, he has done pretty well.

CALVIN, LETS BEGIN WITH YOUR FIRST DAYS OF RIDING IN SOUTH AFRICA BEFORE YOU MOVED TO THE WORLD MX2 SERIES. My dad bought my brother and myself a PW50 when we were four years old. We started riding at a park down the road from our house, and then moved on to small club motocross races in Cape Town. Later, when we were on 125cc bikes my dad said, “if you want to make a career out of this, we will need to move to Europe and truly give it a go.” As kids growing up, my brother was always the “smart one”, while I was always the “sporty” one. My brother then chose to continue on with school, and going to college, while I chose to move to Europe and continue to chase my dream of becoming a world champion in Motocross.

I RECALL GRANT LANGSTON RECENTLY SAYING THAT THE MOTOCROSS SCENE IN SOUTH AFRICA WAS NOT AS GOOD WHEN HE WAS RACING? Right now South African motocross is not that great. There are not so many tracks around anymore. The tracks they do have available are definitely not in the same league as in Europe, or America. It is very difficult for a South African motocross rider to really make a career out of it. But still, I believe there are some great riders there who are very talented! And that could go on and make a career out of racing!

WHAT WAS THE FIRST TIME YOU ENTERED THE WORLD MX2 CHAMPIONSHIPS? In 2014 was when I was lucky enough to get a chance to try the MX2 Motocross series. I raced two GP’s and I learned so much in those two races. I at least had a touch of experience going into the 2015 series! HOW WAS THAT FIRST FULL SEASON RACING THE GP’S? Well, 2015 was supposed to be my first full season in Europe, but I got seriously injured right at the start. I only raced three GP’s towards the end of the year. Since then I haven’t really had a full season without missing some rounds. In 2016 I missed five rounds, and in 2017 I missed six. It’s been tough to say the least, but every season I have learned so much more, and I am really looking forward to 2018!

REWINDING FOR A MINUTE. WHEN YOU LEFT SOUTH AFRICA FOR EUROPE AT SUCH A YOUNG AGE IT MUST HAVE BEEN A BIG ADJUSTMENT. I moved from South Africa to Germany in 2012. The move was actually pretty easy for me. I am an easy-going person who gets along with about everyone, and that helped the transistion a lot. My mom came over with me at first to help me get settled, but then she left after about three weeks. Obviously it was pretty tough to be away from my family. I missed them terribly the first few months, but then I got more used to it. Many previous South African motocross riders have said America is more similar to South Africa than Europe. But I have only been to America for a very short time when I went to Florida for the USGP. It was such a short trip, that I could not really compare it.

WHEN YOU FIRST WENT TO RACE THE GP’S IS THAT WHEN YOU STARTED WITH THE HSF LOGISTICS TEAM? Yes, I started with them in 2015. The team first started back in 2013 with racing the European motocross championships, and then started the World Championship MX2 series in 2015. The team was very new, and needed to learn a lot, which they did. The team did very well in such a short time period! Every year with them, both the team and myself grew. I am truly blessed to have been involved with them, and able to represent them for these past years. I definitely would not be where I am today without the HSF Motorsport Team! I RECALL FIRST SEEING YOUR NAME IN THE RESULTS COLUMN BACK IN 2016 WHERE YOU HAD SOME VERY GOOD RESULTS MIXED IN WITH SOME DNF’S. I feel that I really grew a lot as a racer in 2016. Overall, I had a pretty solid season. In the beginning of the year I twisted my ankle, and tore some ligaments pretty badly. Things started off slow after that, and I was picking it back up when I broke a shoulder blade. After finally getting back on the bike I had a few top five results in a class that was very stacked, so that was great! But then in the very last round of the GP series I crashed with another rider and tore my ACL. As everyone knows, that is a serious injury, and takes a long time to recover from. That really set me back as far as getting ready for 2017.

THAT’S RIGHT, IN 2017 YOU SCORED SOME VERY IMPRESSIVE FINISHES, IN SPITE OF ENDING 2016 WITH A HUGE INJURY. Yes, 2017 started off very slowly. Coming into the first handful of races, I was just too slow from not riding very much, and being ready. But later when we returned from the Flyaway races to Europe I began doing better and better at every round. I managed to finish on the podium in Latvia, and the team was really pumped about it. Just one week later I crashed and injured my thumb, which put me out for another six weeks. At the USGP I crashed and could not race, but then at the next race in The Netherlands I barley missed the podium, and finished fourth. I was one of the fastest riders in MX2 this year, but I struggled to put it all together, and keep it there. THERE HAS BEEN A LOT OF TALK ABOUT THE HSF MOTORSPORT TEAM FOR 2018. IF I UNDERSTAND CORRECTLY, THEY ARE STOPPING THEIR RACE TEAM, BUT SHIFTING SPONSORSHIP TO THE HONDA HRC TEAM. That is true, the HSF Team will stop, and disband. As you heard, they will become the primary, or title sponsor for HRC. I don’t really know where that leaves me, but I hope to be able to give some news sometime in the soon future. One way or another, I will be racing!

HOW ABOUT RACING IN AMERICA, DOES THAT INTEREST YOU? You bet; I am definitely interested in coming to America! But I am planning on being in Europe for another two years, at this time. But if the opportunity arises, and everything fits well, you may see me racing AMA Supercross, and motocross!