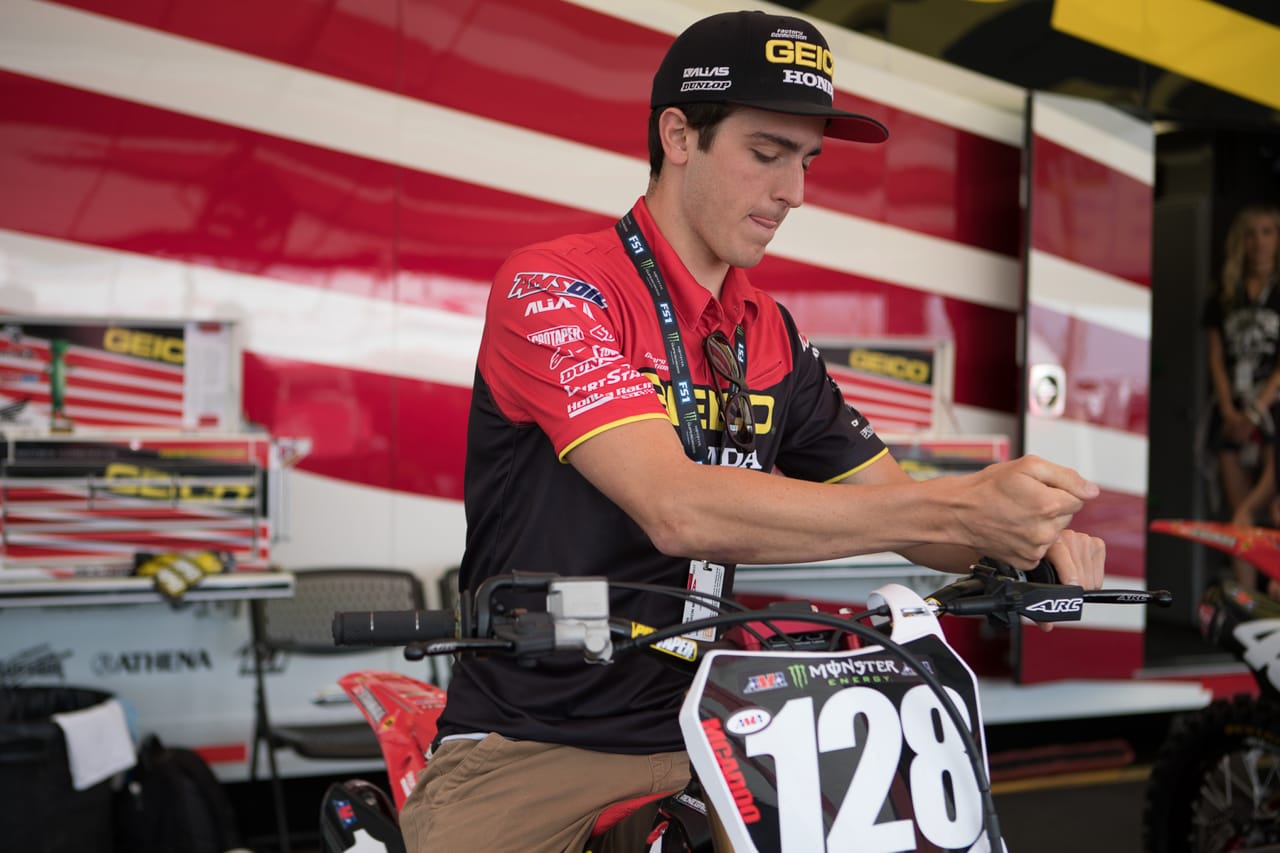 Cameron McAdoo won the Amateur All Stars race at the 2016 Monster Energy Cup. Now, as a Supercross rookie, the Iowan progressed from 15th at the Minneapolis opener, to ninth at Toronto, before being sidelined with a severely cut hand. While out with injury MCR released McAdoo to join the Geico Honda 250 factory team. While it’s certainly unusual for a rider to trade teams during the season, MCR put Cameron’s interests first and allowed him to join Geico Honda where he is contracted through the 2018 season.

LET’S BEGIN WITH YOUR FIRST SUPERCROSS RACE IN MINNEAPOLIS, HOW WOULD YOU DESCRIBE IT? Minneapolis was awesome. I had a lot of fun, and I really did not have much pressure on myself. I was there just focusing on going out there and getting experience, as that is what this is really about.  I ended up making a couple of mistakes in the main event, but I knew I had some good speed, and I had a good night, so it was all good.

HOW DID YOU END UP ON THE GEICO HONDA TEAM  IN THE MIDDLE OF THE 250 EAST SERIES? It was awesome working with the guys at MotoConcepts. Mike and Tony Alessi treated me like gold. I think they were more of a 450 team, and did not really want much to do with the 250, but they gave me the opportunity to actually go out and have a ride in Supercross. Without them, I may have not had that opportunity at the beginning of the year – so it was awesome.  I had a great experience, and had a great time with that team. I was fortunate enough to get this offer from Geico, right around Daytona time and MotoConcepts let me out of my contract. Tony knew that this was better for me Geico Honda does the outdoor series. MotoConcepts want to focus more on the 450 guys and I completely understand that, but it was really special that they did a 250 effort essentially for me. UNFORTUNATELY, THE MOTOCONCEPTS GUYS HAVE A BIT OF A BAD REPUTATION. I do not see any reasons for them to have a bad reputation. They are good people. They are here to win, to do their best, and to have fun.  It is a good atmosphere and none of them are bad people.  They were actually really awesome, and I hope that people will realize that. I really enjoyed my time with those guys. I left on great terms with them, and I probably talk to Tony every other week and he checks in on me, and they are honestly great people.

YOU ARE STILL ON A HONDA, BUT I WOULD IMAGINE THAT THERE IS A LOT OF DIFFERENCES FROM YOUR MCR BIKE TO YOUR GEICO BIKE. Yes, there are some pretty big differences. I am still getting use to the new bike. I have different components on my Geico Honda; stuff with the suspension, and I have different engine parts. They are both Hondas, but they are set up differently. Cameron McAdoo on his on his MotoConcepts Honda. Photo: Brian Converse

HOW DID YOU FEEL ABOUT GETTIN IN THE  TOP TEN AT METLIFE AND LAS VEGAS? I feel really good about MetLife and Las Vegas. I had not been racing for about eight weeks because I had a little practice incident and had to sit out a few rounds. So Met Life was almost like my rookie debut again, because I was with a new team, and on a new bike. I tightened up a bit in the MetLife and Las Vegas mains. I did not feel like I was riding like myself, but that will come with experience. I am happy and we are building, so it is all good!

WHAT ARE YOUR THOUGHTS ON THE UPCOMING AMA 250 NATIONALS? Supercross was kind of a new thing to me, so I am very excited for the outdoors. I expect to be right up there. I have the best team behind me and the best bikes. I think that we are going to put some good results together.

HOW TO UPGRADE YOUR KTM TO THE 2018 BATTERY & BATTERY BOX