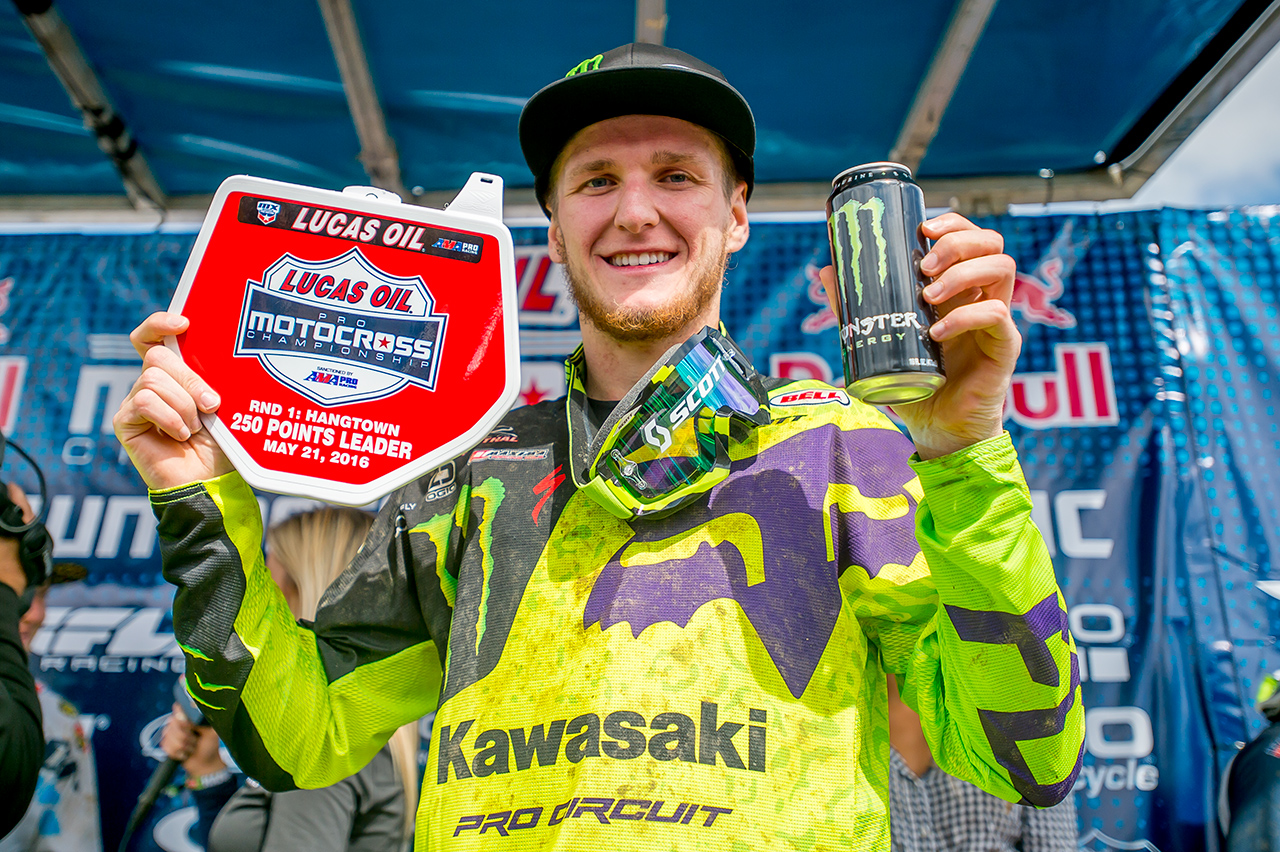 A victorious Joey Savatgy won both motos at Hangtown.

Joey Savatgy is one of the top riders on the Monster Energy Kawasaki Pro Circuit team. After having a modestly successful amateur career, Savatgy turned Pro in 2013. He started racing for the now defunct J-Star JDR KTM team and finished third overall in the 250 West Supercross Championship. Savatgy first became a rider for the Monster Energy Kawasaki Pro Circuit team in 2015. He finished fourth overall in Supercross and had nine top 10 finishes in the 2015 AMA Nationals. A California native, Savatgy has spent much of his racing career on the east coast, first training with Colleen Millsaps at MTF while an amateur. Now he trains with Ricky Carmichael on the GOAT Farm.

You had a strong start to the National season. Any thoughts? I don’t have a lot to say. It was a picture perfect day. We qualified quickest and got the holeshot in the first moto. I was able to lead that wire-to-wire, and then had another good start in the second moto. After following (Jessy) Nelson for a while I was able to make the pass and bring it home for a 1-1 victory. Today was the first moto win of my career. To follow it up with second moto win is a solid way to start the season.

Any thoughts on the red flag in the second moto and restart? I wasn’t in the best position before the red flag. I think I started around sixth. With a red flag deal you get another shot. At the same time, you have another chance to put yourself in a worse position. It is simply part of the job and we are here to execute. Needless to say, it helped me out. We were able to improve our start and it put us in a better position. I followed Jessy (Nelson) for a long time. He had some better lines than me, but I was able to pick up on them over time and close up the gap. Once I made the move and pulled around him, there was no more roost [laughter]. I was able to focus on my race and even out my lap times to make sure I wasn’t dropping off. 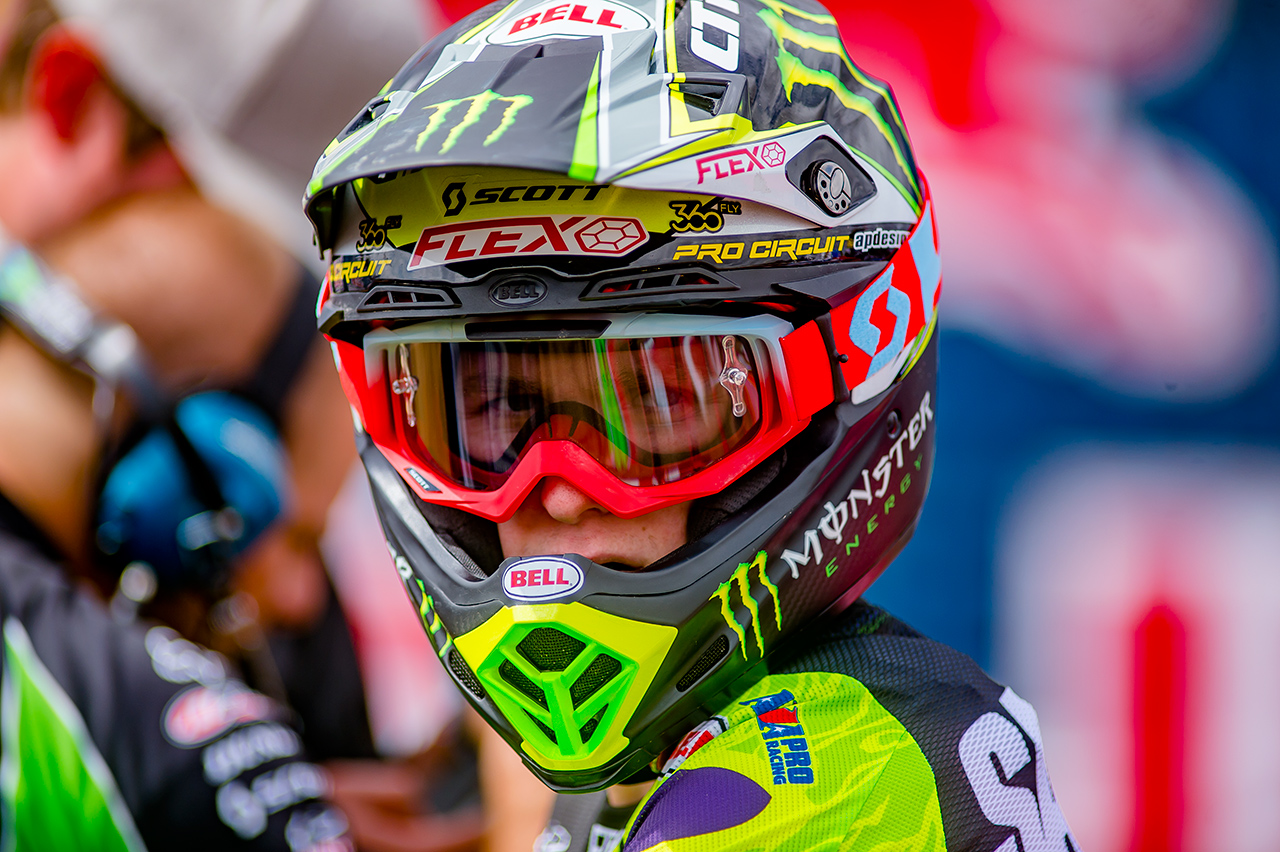 You were strong throughout the Supercross season, but you had newfound vigor at the Las Vegas Supercross. What sparked that? At that point we had a couple of issues that got out of my hands. It was unfortunate, but we regrouped. I’ve been working hard and I knew what needed to be done. In Santa Clara I rode very well, but I didn’t get a good start. Coming into Las Vegas, I had fastest qualifier there, too. I got the holeshot and won the race. It has been a long process, but we have been putting in the work and time. I’m glad it’s paying off.

You had to adapt quickly with the weather change in Vegas. In practice you get used to the track one way and then when it rains you have to totally reset your gameplan. It’s going to be completely different than what you planned on. All in all, it is part of our job. We have to adapt quickly, and in Vegas it worked out.

Any extra incentive to win a title before Cooper Webb moves up? No, because J-Mart [Jeremy Martin] has the number one plate. There is always an incentive to win. I want to win. I’m hungry and I am starting the season off right. I would have liked to won the Supercross title this year and I came close, but I did everything I could do. I want to keep the ball rolling, and I’m hanging onto the red plate as long as possible. How is it working with Mitch Payton? He is a down-to-earth guy. Both of us are very similar and we are very dedicated to what we do. He wants to win and I want to win. We get along very well. I stay at his house often when I come to California. We frequently eat dinner together. It is a blessing. Mitch took me in when a lot of teams were unsure about me. He saw something no one else did. There is a reason he is the most winningest 250 team owner there is. He knows what he’s doing. I’m trying to make him proud. Mitch Payton, what are your thoughts on Joey Savatgy right now? I am really happy for him. He rode great today. He qualified fastest, got the holeshot in the first moto and took off. That was awesome. In the second moto he started second and it took a little bit of time, but basically he got into the lead and managed everything pretty well. It was a little worrisome towards the end, because Alex Martin was coming. I am really happy for Joey. He won an overall at Unadilla last year, but he still hadn’t won a moto. To win two motos and get the overall is the way to do it! I am pumped for him.

You have two nicknames–”Lion” and “Savage.” Which one do you prefer? I like “Savage,” but my girlfriend likes “Lion” because the lion is always hunting its prey. I think I’ll stick with “Savage,” because it fits better.

ASK THE MXPERTS: WHAT IS UNSPRUNG WEIGHT?