A: That is a good question. It all depends on your color preference. If you like blue rims better than black rims, then you’re in luck. If you like black rims better than blue rims, we recommend you buy a 2017 YZ125. We could go either way, but we are guessing the consensus will be black rims, as the 2015 YZ125 models and all prior YZ125s had silver rims. What color rims did those buyers choose when they replaced the silver rims? You guessed it, black. There were only a handful who dared to be different from the rest and chose blue-anodized rims for their small but mighty smokers. Oh yeah, did we forget to mention the 2018 YZ125 also has BNG? A: To be completely honest, nobody. At least not a new one. For any blue-collar worker, it is a waste of money. And, if you are a blue-collar worker with a kid ready to make the jump to 125s, it is an even bigger waste of money. $6499 is a big chunk of change when you can find a good-condition, used YZ125 for half the price. A newbie on big bikes is going to lay it over more than James Stewart on a YZ450F. Clutch and brake levers will be broken. Front fenders will be scratched up, and clutches will be smoked. It will take most kids some time to get used to the taller bike. Tip-overs are inevitable. Used is the way to go for newbies.

Most people know that the 2006 to 2018 Yamaha YZ125 models are almost identical. In 2015, Yamaha dressed the smoker in new clothes to mask its age. It may look better, but it is the same mechanically. A: No, we love this bike. The fun factor is through the roof for riders who don’t mind working for it. This smoker handles like a dream. A good YZ125 rider can put it wherever he wants—anywhere on the track. It is light and has decent power at higher rpm. The problem is, we don’t love racing this bike unless it is against other YZ125s. It is a blast to race, but we dislike getting beaten by bikes with double the displacement. In stock trim, the YZ125 is just not competitive with 250 four-strokes or the KTM 125SX, Husky TC125 and TM MX125.

Q: CAN YOU MAKE THIS BIKE COMPETITIVE?

A: Of course. All it takes is money. To buy a brand-spanking-new 2018 YZ125 off the showroom floor will cost you $6499 before taxes, uncrating fees, assembly fees and miscellaneous fees. That is $500 cheaper than its prime competition, the KTM 125SX. A few Benjamins go a long way on a 125 two-stroke. What would we spend our money on? Here are three simple and cheap steps to improve the YZ125’s power. (1) Pipe. For less than $250, you can gain around 2 horsepower with an aftermarket pipe (add in $135 for a silencer). We have had great luck with both Pro Circuit and FMF pipes. After a pipe, you are only one horse away from matching the KTM 125SX at peak.

(3) Gearing. Adding one tooth to the rear, going from a 48 to a 49, will perk up second gear, gets you to third gear sooner and make the overall ratios between the six gears more user-friendly.

A: No. Nay. Nein. Nyet. The KTM 125SX is as modern as a 125cc two-stroke gets. You aren’t going to make the YZ125 modern for five bills. Instead, spend the $500 on one thing and one thing only—more power. On a small-displacement bike, power trumps suspension, handling, braking, clutch performance and turning. Although all these things make for an improved bike—and you can’t discount the KTM’s better clutch, brakes, handling, shifting and chassis—they matter less if you can make your YZ125 run like a scalded cat. 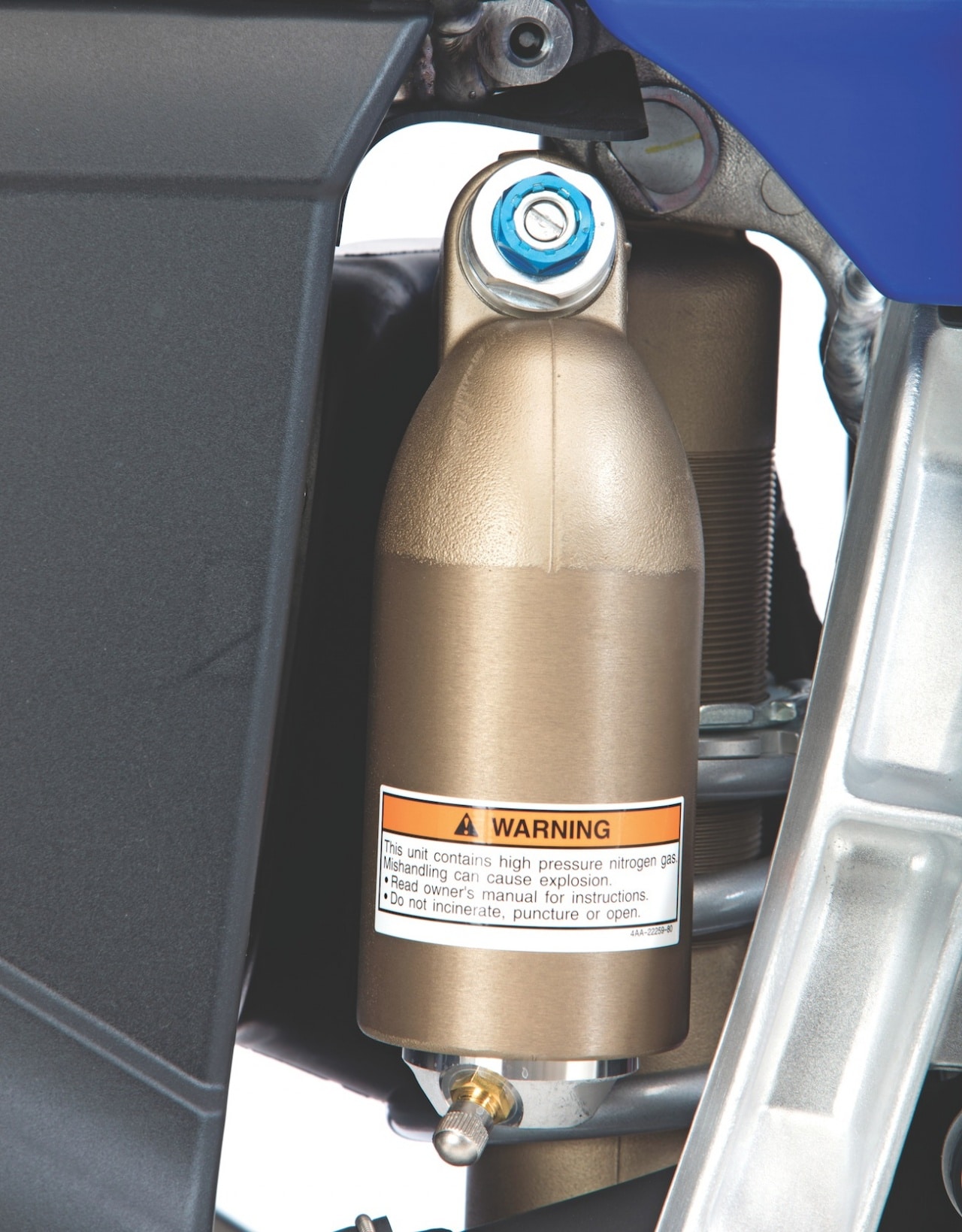 Q: WHY IS THE OLD KAYABA SUSPENSION SO GOOD?

A: It is crazy to think that 12-year-old Kayaba suspension components are still in the running for the best suspension crown. It doesn’t make logical sense. Kayaba has made a plethora of different air and spring forks over the last decade, but they can’t match SSS. Perhaps Kayaba is not allowed to share Yamaha’s proprietary settings with any other manufacturer. It is like your grandma’s secret meatloaf recipe.

We will have to say that after all this time, Honda has a set of Showa forks on the 2018 CRF250 that are a little better than the Yamaha Kayaba SSS forks, but not by much. KTM’s WP AER air forks are also closing the SSS fork gap.

Q: WHAT WOULD WE DO IF WE WERE YAMAHA?

A: Yamaha already knows how to make its YZ125 significantly better than it already is. How do we know? There is a Yamaha GYTR YZ125 high-performance kit that is only offered in Europe. It includes a different cylinder head, GYTR piston, VForce Reed Valve, pipe, silencer, heavier magneto, CDI box and different jetting. The downside is, it costs a little over $2300. You can find it at www.yamaha-motor.eu/uk. Yamaha needs to take this kit, reproduce it in production form and join the current decade. Or, sell a YZ125 Limited Edition GYTR model. Our bet is, they would fly off the showroom floors.

Yamaha is the smartest of the Japanese motorcycle manufacturers when it comes to motocross bikes, but you really don’t have to be smart; just watch what KTM does and duplicate it. Yamaha kept two-strokes in production when all the other Japanese manufacturers decommissioned them. Yamaha saw the popularity of the offroad market and built the YZ250X to get a piece of what is a giant pie for KTM. And, they have now introduced a YZ65 to try to get a share of the youth market that belongs lock, stock and barrel to KTM and Husky. Yamaha needs to send a market analyst out into the field to see that two-strokes are coming back. Yamaha is in the best position to attack that market with a passion, but not with its current wishy-washy approach of selling the same bike for 12 years. A: Yes. There have only been minor changes since 2006 on the YZ125. None of these changes have been significant enough to obsolete the older models. In 2007, the YZ125 switched from Renthal 7/8-inch bars to Pro Taper 1-1/8 oversized bars. In 2008, it got stiffer fork springs, and 2009 brought a lighter brake-hose clamp. In 2011, the YZ125 got a longer silencer, richer jetting and a white rear fender. In 2015, the aesthetics were upgraded, and in 2016 it got black rims and a gold chain. The plastics change in 2015 mimicked the look of the YZ250F’s arrow design philosophy, but for the most part, all the new arrow plastic will fit on the older models. Here are a few tips about the plastic.

(2) Airbox. Although the new airbox looks very different from the old one, it will bolt on the older frames with no hassles (as the subframe and air boot have not been changed). Even simpler, Cycra has designed aftermarket side panels that make the airbox and number plates on any 2005 to 2014 YZ125/250 look like 2018 YZ plastic (www.cycraracing.com).

(1) Chassis. We don’t mind that the YZ125 chassis has flaws. Every bike has its imperfections. We just don’t like that Yamaha has neglected this tiddler for the last 12 years.

(2) Engine. It is an easy-to-ride engine that is gutless by today’s standards. The clutch has to be abused to keep it in the meat of the powerband. You can buy power, but it will cost you.

(3) Front tire. Dunlop’s less-than-stellar Dunlop MX52 front tire makes the YZ125 front end feel worse than it actually is. Invest in the best rubber possible. Most MXA test riders choose to run a Dunlop MX3S front tire. It works better than the MX52 in most conditions; but, keep in mind, it wears faster than the MX52. We don’t mind running an MX52 on the rear—if the conditions are on the hard side.

(4) Powerband. We don’t hate the YZ125’s powerband; we just think it needs to step up to the plate. It is as though Yamaha’s engineers are still competing against the CR125, KX125 and RM125. Hate to break it to you, but those bikes are long gone. The real competition is KTM and Husky.

(5) Price. To sell motocross bikes in the modern era, you need motivated buyers. That won’t happen when you can buy a used YZ125 or YZ250 for half the price of a new one and rebuild the engine for under $250.

(1) Clutch. The clutch can take a beating better than Rocky in his prime.

(2) Suspension. Small, fat, tall, skinny, Beginner or Pro, the Kayaba SSS (Speed Sensitive System) components are the best suspension money can buy. Luckily for you, it comes stock on the entire Yamaha line.

(3) Maintenance. Anyone YZ125 two-stroke owner who is mechanically inclined can change a YZ125’s top end. A Vertex replica piston kit will cost you $124.48 (www.vertexpistons.com). You could buy two YZ125 pistons for the cost of one YZ250F four-stroke piston.

(4) Bulletproof. Yamaha has the best reputation for lasting durability.

A: We think this bike still has a purpose. It suits newcomers to the big-bike class splendidly. It is a great entry-level bike. It has great suspension and is very light. As much as we criticize the YZ125, we are mostly critics of Yamaha’s lack of R&D. When we are in the saddle of a YZ125, we put the boardroom complaints behind and have a smile from ear to ear. If you are a serious racer, the 2018 YZ125 isn’t up to the standards of its fellow 125 two-strokes. We don’t think it is too much to ask Yamaha to make some updates to the chassis and engine. We believe it is still possible to teach this old dog new tricks.

This is how we set up our 2018 Yamaha YZ125 for racing. We offer it as a guide to help you find your own sweet spot.

KAYABA SSS FORK SETTINGS
For hardcore racing, we ran this setup on the 2018 Yamaha YZ125 (stock clickers are in parentheses):
Spring rate: 0.42 kg/mm
Compression: 12 clicks out
Rebound: 12 clicks out
Fork-leg height: 5mm up
Notes: These are awesome forks, made all the more terrific by the light feel and snappy input of the two-stroke engine. Obviously, if you are fast or fat, you might want to go stiffer on the fork springs. Faster riders can dial in more compression and use the crossover effect of rebound damping to get the stock fork springs to work.

KAYABA SSS SHOCK SETTINGS
For hardcore racing, we ran this setup on the 2018 Yamaha YZ125 (stock clickers are in parentheses):
Spring rate: 4.7 kg/mm
Race sag: 100mm (105mm)
Hi-compression: 1-1/2 turns out
Lo-compression: 12 clicks out
Rebound: 12 clicks out
Notes: The shock doesn’t do anything funny. It tracks straight and is in tune with the bike. We love this shock.