MXA MOVIE REVIEW: “ON ANY SUNDAY: THE NEXT CHAPTER” The movie poster on an actual movie theatre.

It’s been 40 years since “On Any Sunday” first appeared on movie screens across America. For many the Bruce Brown directed paean to motorcycling was the end-all, be-all in documenting the passion and enthusiasm that encouraged so many people to take up the throttle and flock to a diverse universe of race courses; from local motocross tracks and the Baja 1000, to the Daytona Speedway, the Bonneville Salt Flats and ISDT trails in Spain.

In the four decades since the original’s release, the sport of motorcycling has evolved like few others. Even as long ago as the 1990s, the original movie (filmed in 1969) felt more like a period piece to many of the new generation of motorcyclists. It was a day and age where Harley Davidsons were still competitive road racers and the opening sequence of high-jumping BMX riders provided some of the wildest aerial stunts. There was a second verison made a few years later, but it didn’t get rave reviews. This is now the third “On Any Sunday.” The opening sequence from the original.

Fast forward to last week when MXA got to take in an invitation from the Red Bull Media House to the world preview of “On Any Sunday: The Next Chapter.” In typical, over-the-top Red Bull fashion, this was no quiet theatrical release. It was a full-on, star-studded gala that transformed the west end of Hollywood Blvd into a giant parking lot for every kind of motorcycle imaginable. The world famous Dolby Theatre was where we gathered along with off-road motorcycle luminaries like Rick Johnson, Robbie Maddison, Travis Pastrana, Ivan Ramirez, and Doug Henry. 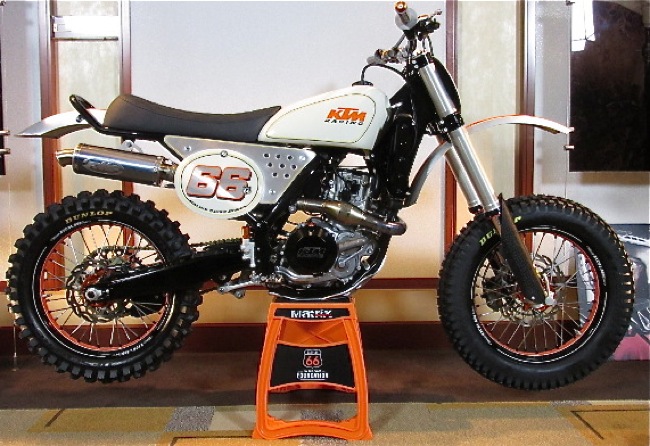 The movie was dedicated to Kurt Caselli and the Roland Sands designed Caselli memorial bike was parked in the lobby.

When the lights dimmed, the night’s biggest applause was saved for Bruce Brown. Bruce was his usual humorous self, taking time to thank all his “surfing buddies” for coming down to see the movie (before “On Any Sunday” Brown directed the cult surf classic, “Endless Summer”). Alongside Bruce was 1969 AMA Grand National Champion Mert Lawwill, who served as one of main story lines in the original movie. Despite much anticipation, Mert’s co-star Malcolm Smith wasn’t in attendance.

Despite everyone in attendance being a motorcycle fan to begin with, you couldn’t help but sense a slight undercurrent of an “us versus them” feeling in the air between the “old guys” who grew up on the original and those who had not.  Hearing one person lean to his friend and say, “I heard Steve McQueen was in the orginal,” was the sort of sentiment that drove home the point. Every rider who showed up got the red carpet treatment that included a shot in front of the paparazzi.

As for the movie itself, opinions were mixed – again, seemingly drawing along similar “old” versus “new” lines. For anyone, like myself, who walked out of a theatre in 1971 after seeing the original “On Any Sunday,” your life was literally changed forever. Will the new version have the same effect on modern day motorcyclists? Hopefully. The movie was, not surprisingly, filled with an abundance of Red Bull sponsored athletes which definitely tilted the coverage. Still, the camerawork was impressive — in fact, one diehard moto guy was so awestruck at the MotoGP footage that he vowed to become a fan of the leather set.

WHAT WASN’T THERE AND WHAT SHOULDN’T HAVE BEEN 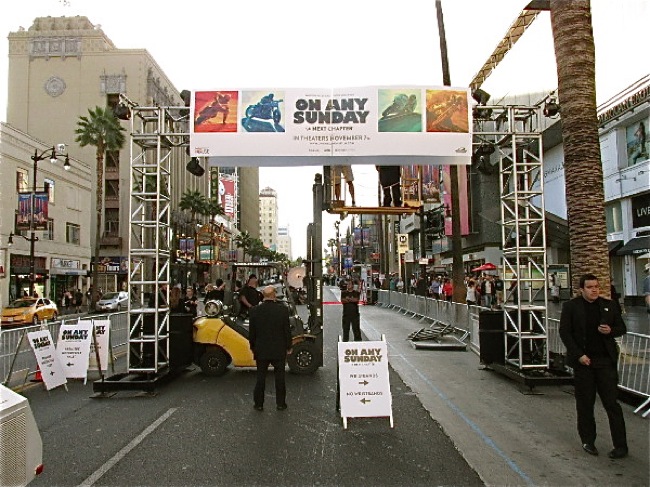 For one night only, the corner of Hollywood and Highland became the most exclusive motorcycle parking lot.

What stood out? what was missing? Not seeing any desert/Paris-Dakar or MXGP coverage was strange — especially since Red Bull is so successful in those events . The ice racing sequence was really without purpose and almost forcefully revisionist to how Bruce first covered it.

The movie’s overriding theme of motorcycling as a real “family values” experience was appreciated, if a bit overdone. Overall, this was the second movie premier to take place on Hollywood Blvd. this year (Todd Huffman’s “The John Penton Story” debuted at the Egyptian Theatre down the block just a few months prior) which certain says something positive about where motorcycles fit into the cultural milieu today.

The bottom line? Hey, it’s a movie about motorcycles and the men and women who race them — how can you not see it?

ON ANY SUNDAY: THE NEXT CHAPTER

COOPER WEBB: HIGHLIGHTS OF THE FINAL ROUND OF THE ALL-JAPAN SERIES