A: The TM 112MX is a TM model that is the first of its kind for 2022. Previously, TM only offered a 100cc Junior model that was based on its 85cc engine and chassis. Since the TM 100MX was so successful in the American market, TM of Italy decided to build a 112cc Supermini engine from scratch that is only available to TM’s U.S. importer. The bike we tested was the first one off the production line, with all preproduction parts straight from the Italian factory in Pesaro, Italy. TM importer Ralf Schmidt told us that a few refinements to the production models have been made, such as the jetting, for smoother and stronger top-end power.

Q: WHY DID TM BUILD A ONE-OFF SUPERMINI FOR ONLY THE U.S. MARKET?

A: The Supermini class originated in America. Over the years, this class has gotten a lot of attention in the amateur ranks. With America being home to the biggest Amateur National in the world—the Loretta Lynn Amateur National located in Hurricane Mills, Tennessee, Amateur riders from around the globe come to prove themselves in hopes of getting the attention of factory teams. In TM’s case, they saw the potential to grow their market share at Loretta’s by having TM motorcycles shine at the big race. The more a manufacturer wins at Loretta’s, the more the mini dads consider that brand might be the best for little Johnny. When Ty Masterpool won the Supermini class on a close-to-stock TM 100MX back in 2017, it proved the bike could win against the best bikes money could buy. This catapulted TM into the minibike world, and Ty got pulled up to the Star Racing factory Yamaha 250 team to race in the big leagues. TM was in the limelight on American soil, and they struck while the iron was hot to keep the TM buzz going. Since the AMA allows a max displacement of 112cc in the Supermini class at Loretta’s, TM left no power on the table as they developed a 111.8cc model.

This is a good strategy for TM. The Supermini market is smaller and less competitive than the big bike market, as Yamaha and Honda don’t develop an 85cc anymore, and Suzuki’s RM85 is further behind the eight-ball than its four-stroke models. The Austrian juggernaut only offers an 85cc engine off the showroom floor in the KTM, Husky and GasGas bikes, but they do offer an aftermarket 105cc kit you can buy for $769 (part #47649905044). That leaves only Kawasaki, who has had a KX100 for years but just stepped up to produce a KX112 for 2022. 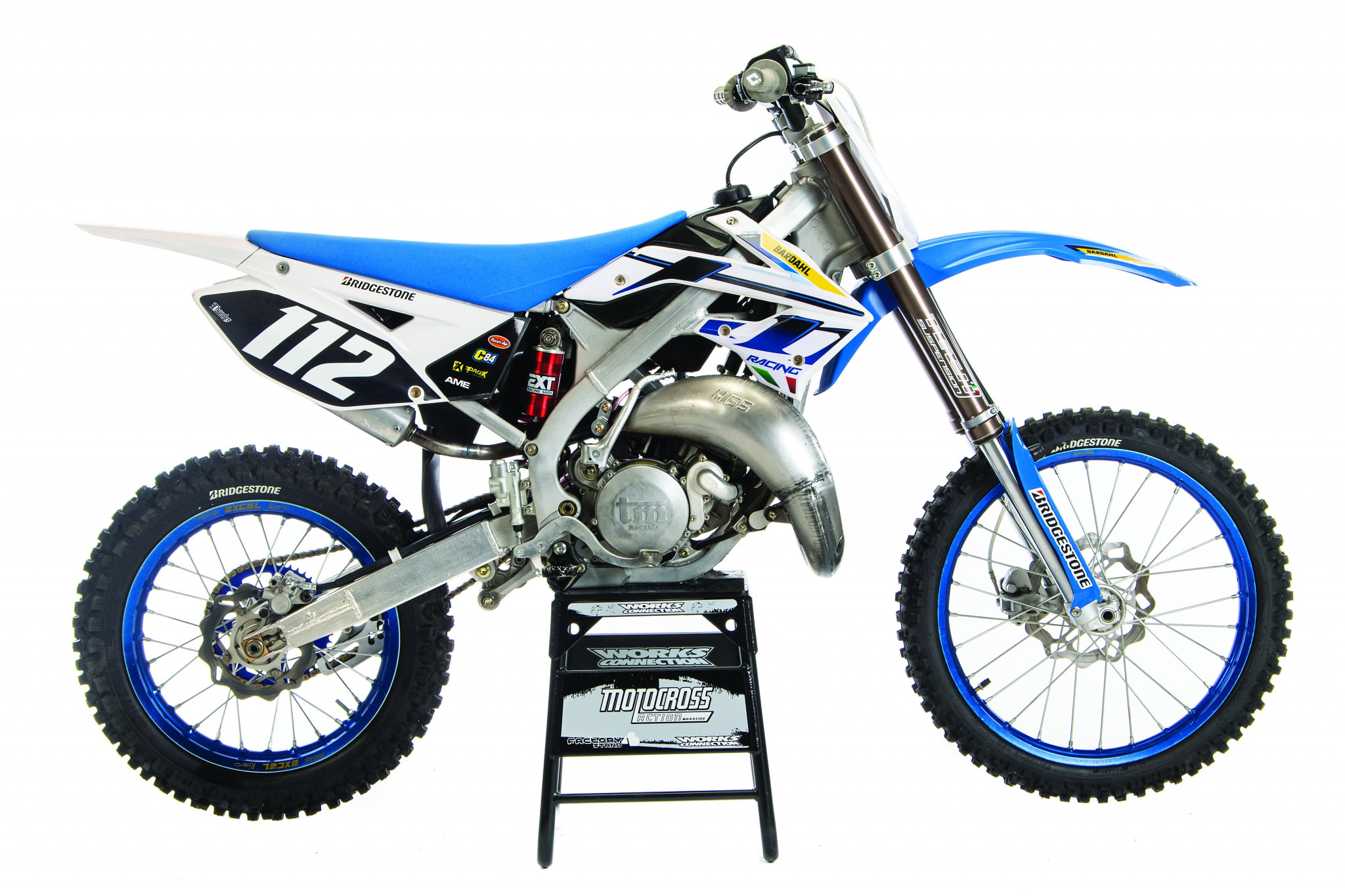 The TM 112MX was built specifically for the Supermini class in America.

Q: WHY IS IT HARD TO BUILD A COMPETITIVE SUPERMINI?

A: Yamaha never offered a big-wheel model of its YZ85. This made loyal Yamaha owners have to spend beaucoup bucks to be competitive in the Supermini class. They would have to buy bigger 19-inch front wheels and 16-inch rear wheels and find an engine builder that would bore and stroke their 85cc engine to a 105cc or higher without making it susceptible to engine failure. It was a money pit, to say the least. Honda, KTM and Suzuki offered 85cc models with the bigger wheels, and only the Honda CR85 Expert offered a longer swingarm. These bikes obviously weren’t competitive in the Supermini class, and Honda and Suzuki never offered a 105cc big-bore kit as KTM did.

There is no “stock” Supermini class at the big amateur races. There is only a modified class, and the only regulation enforced on the engine is the max displacement of 112cc. Most engine builders stroked the bikes to 105cc, as they didn’t want to lose durability by having to bore out a cylinder that was thin already to get to 112cc. This made the Supermini class more about who had the best bike than who was the best rider. After all these years, TM developed a solution to even the playing field and take over market share.

A: The TM 112MX and the TM 100MX are the same save for the powerplant. The engine is where TM focused its attention and money on this bike. The bore on the TM 112MX stayed the same as on the TM 100MX, but the stroke was increased on a specifically built bigger crank to get the extra 12cc. With a longer stroke adding more power, TM went with a more rugged piston and piston pin to ensure durability. The bigger crank does not fit into the TM 100MX cases, so the TM engineers built cases just for the TM 112MX. Additionally, a new cylinder was built in conjunction with the other updated engine components.

So why didn’t TM just use a bigger piston and bore on the TM 100MX cylinder to make it easier on themselves? For one, that isn’t TM’s style. They don’t follow the crowd. They are an exotic boutique bike builder that hand-builds around 1300 bikes a year worldwide in a small town in Italy. Yes, it is more expensive to build an all-new engine, but TM knows that cutting corners to save a few bucks will make the grunt of the engine less rider compliant. Sure, it will be faster, but much like the KTM 150SX in comparison to the KTM 125SX, nine out of 10 racers will choose to race the KTM 125SX over the more powerful engine due to the broader, easier-to-ride power. TM wanted to build an engine that had the power spread of an 85cc machine with increased pony power across the board. 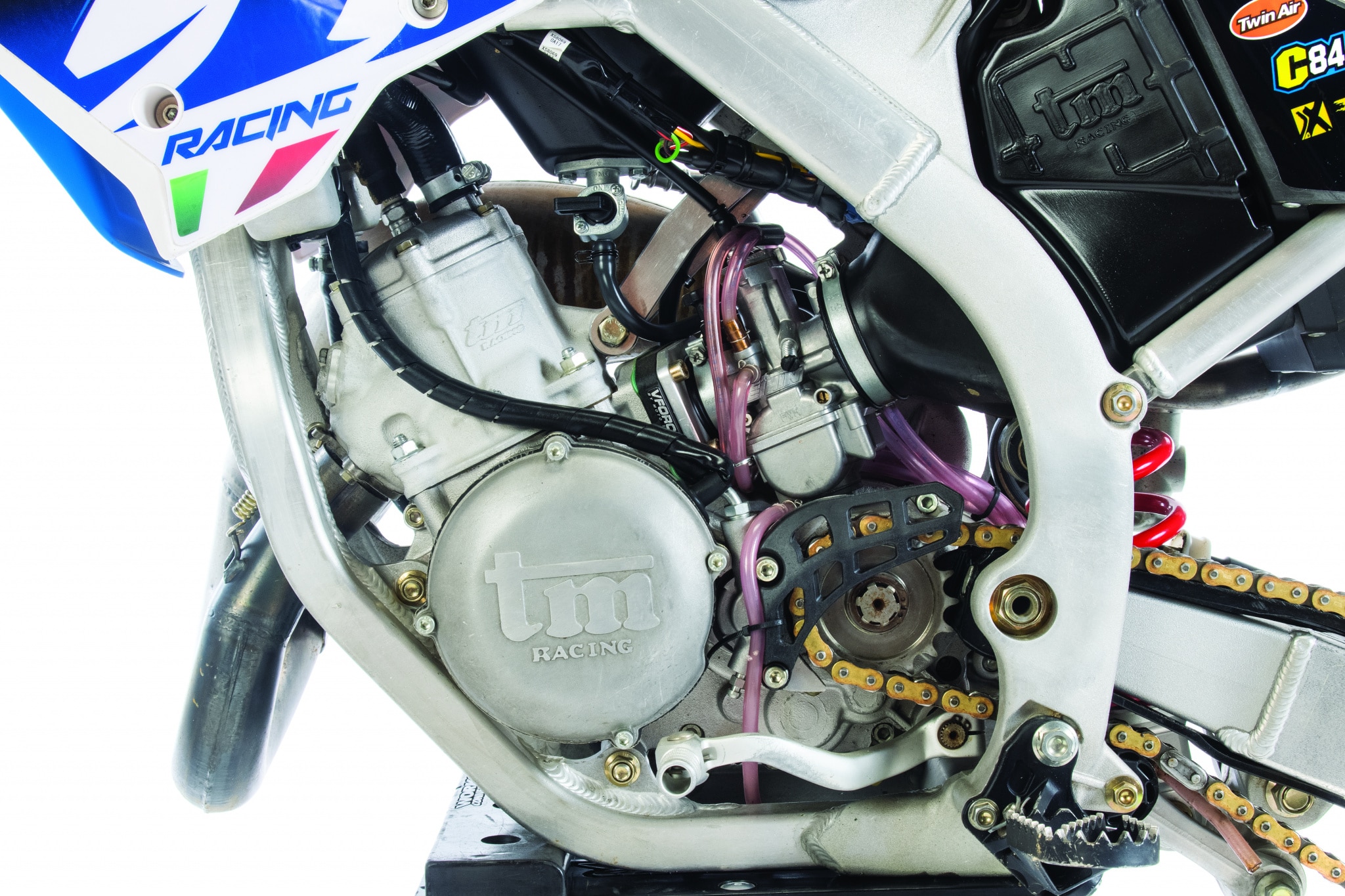 The TM 112MX engine is potent. It is ready to race in stock trim.

Q: DOES THE TM 112MX HANDLE AS WELL AS THE MORE POPULAR MANUFACTURERS’ OFFERINGS?

A: Every tester was surprised by the way the TM 112MX handled. It felt more refined than most of the TMs we have ridden in the past. We had low expectations for the suspension, as the TM 112MX comes with an EXT Racing shock and Formula Tech Suspension forks, both brands we don’t hear a lot about. Surprisingly, the mismatched combination worked well. The fork and shock offered a good balance for the chassis. Riders had the confidence to push hard on the bike without any surprises from the chassis or suspension. The bike turned well; the only complaint was that the front Bridgestone Battlecross X30 tended to roll when there was a lot of pressure on the front end.

A: This bike is powerful for a minibike. Our testers weren’t expecting that amount of sheer power. They described the grunt as 125cc-like—with exceptional low-to-mid power. With this bike being pre-production, the power was a bit jerky on low rpm but smoothed out the more you opened up the throttle. This jerky feeling was related more to jetting than anything else, and the factory vowed to resolve this issue before the first production bikes are shipped to America.

(1) Sprocket bolts. The seven sprocket bolts are overkill. At least we know the rear chain wheel won’t come off.

(2) Herky-jerky. The low-end grunt is on the jerky side; however, this should be ironed out in production.

(4) Front tire. The Bridgestone Battlecross X30 front tire has a soft sidewall and rolls over when a lot of weight is on the front end. 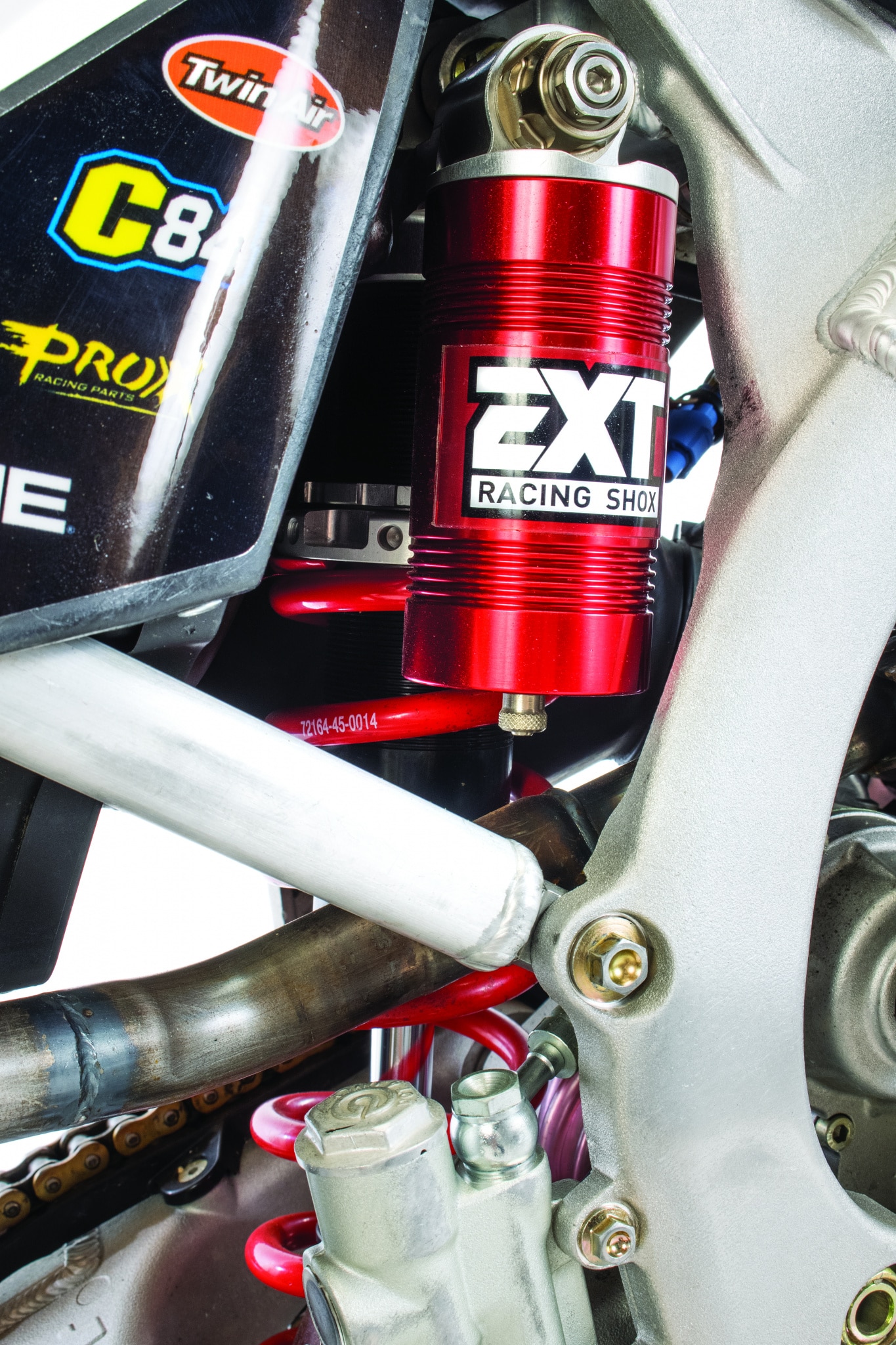 (1) Model. We love that TM built a bike specifically for the Supermini class in the U.S. market.

(2) Engine. This engine is powerful enough in stock trim to be competitive in the Supermini class at the Loretta Lynn National. A few jetting changes, a different pipe and a modified ECU would be the extent of the updates required to get the most out of this bike.

(3) Price. We usually say that TMs are very expensive, which they are in comparison to the competition; however, since mini dads have to pay big money to make their bikes competitive with the TM 112MX, that alone makes the $7295 price tag a steal if you are racing the Supermini class. Plus, you don’t have to do all the leg work.

(4) Brakes. The Brembo brakes are superb.

(6) Suspension. The forks and shock have a good base setting for the average 120-pound fast Supermini rider. A: TM made a big investment in something that didn’t exist before—a true-to-life Supermini. An Italian manufacturer made the bike strictly for the U.S. market because a TM 112MX isn’t needed anywhere else in the world. We give TM kudos for anteing up to produce such a niche bike. We love everything about it. TM is making the big manufacturers rethink their business plans in the minibike world. 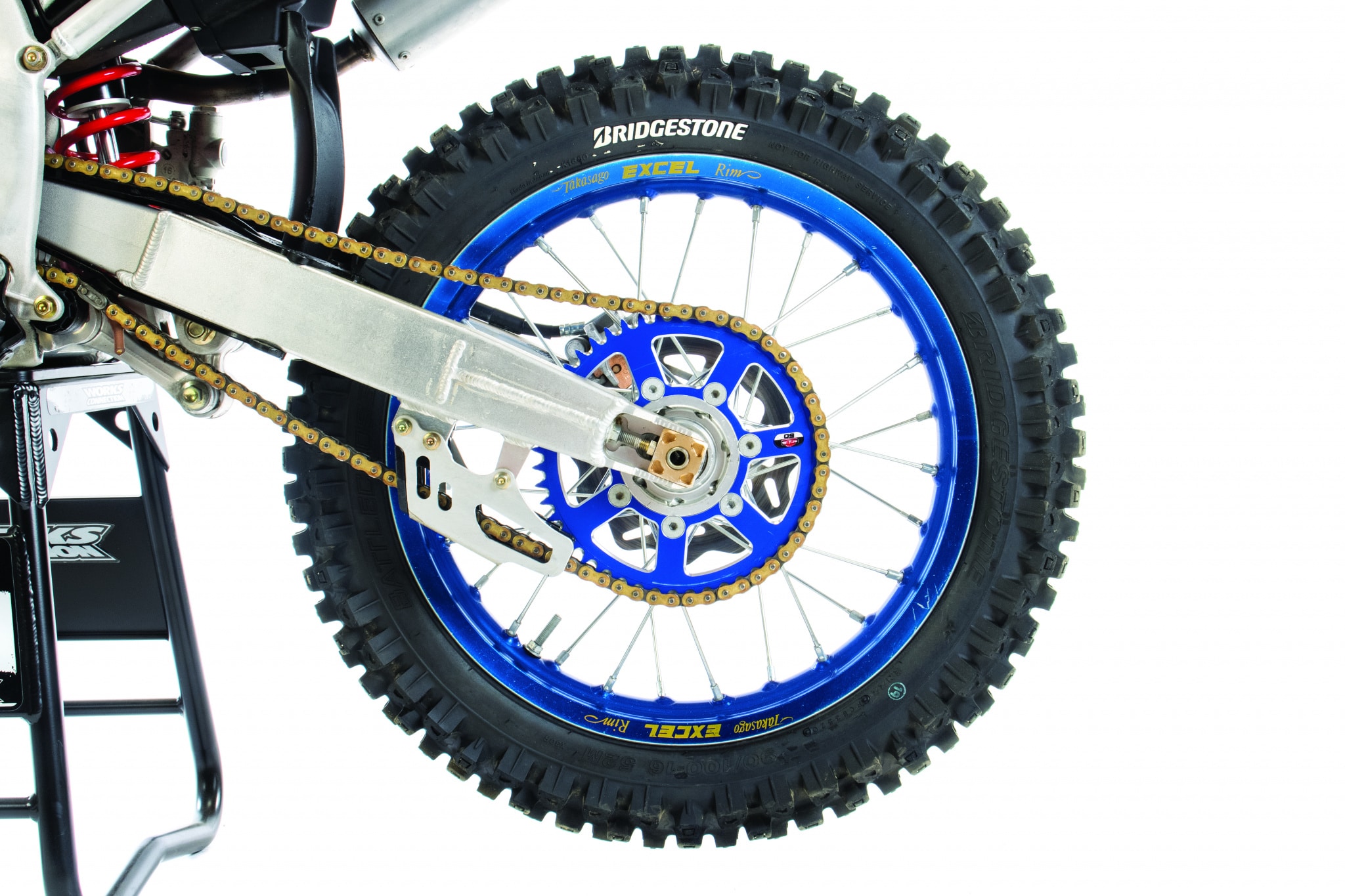 FORMULA TECH FORK SETTINGS
As with all TM motorcycles, you can custom-order your new bike with spring rates specific to your weight. The stock fork springs felt like a good choice for the average Supermini rider. For hardcore racing, we recommend this fork setup for an average rider on the 2021 TM 112MX (stock clickers are in parentheses):
Spring rate: 3.8 N/mm
Compression: 10 clicks out (12 clicks out)
Rebound: 12 clicks out

EXT RACING SHOX SHOCK SETTINGS
Our testers felt that the EXT shock was really good in stock trim. The shock setting was plush but held up well on hard hits. Our testers didn’t need to make many adjustments to get a ballpark setting. For hardcore racing, we recommend this shock setup for the 2022 TM 112MX (stock clickers are in parentheses):
Spring rate: 4.5 N/mm
Race sag: 100mm
Hi-compression: 1 turns out
Lo-compression: 10 clicks out (12 clicks out)
Rebound: 12 clicks out