A few years ago TM’s race bikes had a very distinct European flavor in terms of setup, layout and handling. The new models have been Americanized for the better.

A: It is no secret that Italians like to talk; however, when it comes to technical information, their lips are sealed. Even though we are on a need-to-know basis with TM Italy, we, as well as American TM importer Ralf Schmidt, never get solid answers. Luckily, Ralf knows each TM like the back of his hand, and when a new model rolls into his warehouse, he tears it down to find out what is new and updated. Here is a list of the five most significant updates to the TM 144MX, according to Ralf.

(1) Cylinder. The cylinder has been reworked.

(2) Power valve. The TM 144’s power valve has been updated to the new, push-rod, electronic power valve, just like the TM 300MX two-stroke. In the past, we had issues with the cable-operated TM power valve, so the new push-rod power valve is a breath of fresh air. It requires less maintenance because there is no cable to adjust.

(3) ECU. Since the power valve is now operated electronically, that means the ECU had to get smarter.

(4) Forks. The KYB fork settings have been updated.

(5) Shock. The TM rear shock is new for 2020 with parameters that match the forks. 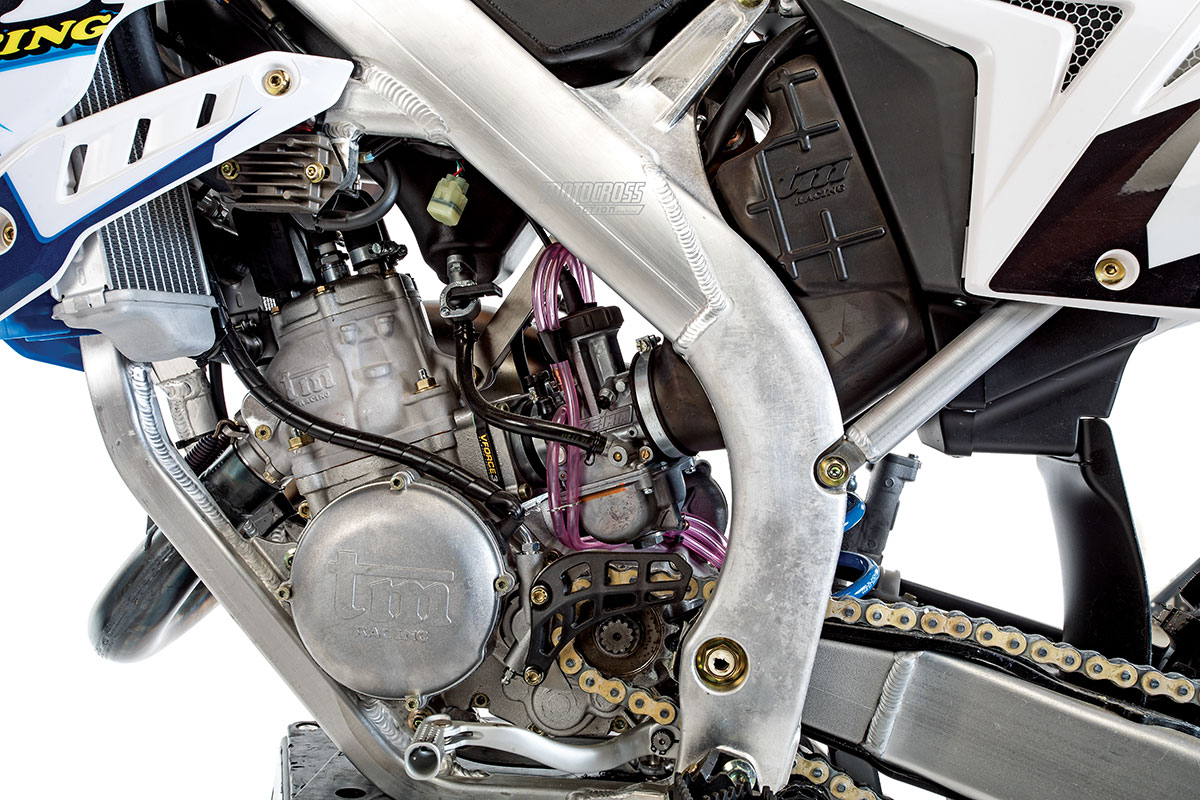 A: Not at all. TM is a boutique builder, meaning it is a small Italian company that produces bikes in limited numbers, not in the tens of thousands like the red, blue, white, orange and green bikes. Hold on, does that mean Suzuki is a boutique builder as well? No, silly. Suzuki isn’t producing small batches of bikes on purpose like TM is. Suzuki is small because it doesn’t seem to care about the off-road market. TM is small because it wants to stay small and be different. Different is the key word here. TM builds each of its bikes from the ground up, using lots of customized parts, which is reflected in the high price tag. Unlike KTM, who builds its 150SX by installing a bigger piston, the TM 144MX starts from scratch. That means totally new cases, a different crank, and a completely unique bore-and-stroke. Is KTM smart and TM dumb? Not at all. TM dares to be different because it is after a different type of customer. Think of TM as the Ducati of motocross.

Q: WAS BUILDING A COMPLETELY DIFFERENT ENGINE A GOOD IDEA?

A: We will answer this question by taking the long way around it. Most MXA test riders prefer to race the KTM 125SX over the KTM 150SX. Why? Because the 150SX’s style of power is harder to ride. The power hits hard, signs off fast, and upsets the chassis with its more erratic delivery. It’s a great play-bike engine and perfect for jumping big jumps, but every MXA test rider wished that the KTM 150SX had the fluid and broad powerband of the 125SX—only with more power. And, that is why TM didn’t just big-bore its 125MX. TM wanted to produce a 125cc style of power that delivered the vibes throughout the entire rpm range. To accomplish this, TM needed to build an all-new engine. Yes, we think boring and stroking the TM 1440MX engine was a good idea.

Q: WHAT DID THE MXA TEST RIDERS THINK OF THE TM 144MX ENGINE?

A: It surprised them. They expected a big-bang engine like the KTM 150SX, but the 2020 TM 144MX wanted to scream at the top of its lungs. It ran best when held wide open. The power spread was reminiscent of an old-school, factory, 125cc engine. Our faster test riders couldn’t say enough about the power, because their skill allowed them to keep the throttle pegged to the stops. Slower testers had some issues at first. They felt the bike lagged off the bottom, which hampered their ability to get on top of the power right away. We fixed some of this with a needle change to clean up the low-to-mid transition, which connected the power better. To close the gaps between gears and allow the engine to rev out faster for our lower-level riders, we went from the stock 13/52 gearing to 13/53. This gearing change made a big difference, helping our Vet and Novice riders use more of the power output.

A: Over the years, the European feel that TMs used to have has slowly eroded away, and the American style of handling has replaced the Italian style. That translates into less oversteer, quicker handling and a more connected feel. We couldn’t be happier, because we are Americans. This change in philosophy means no more stinkbug rear ends, harsh forks, cow-horn handlebars, front-end push and over-sprung rear shocks. The 2020 TM 144MX offers a rigid and stable chassis that turns exceptionally well. It doesn’t shake or wiggle at speed, and the cockpit is big, which suits taller riders well. Test riders had zero complaints. 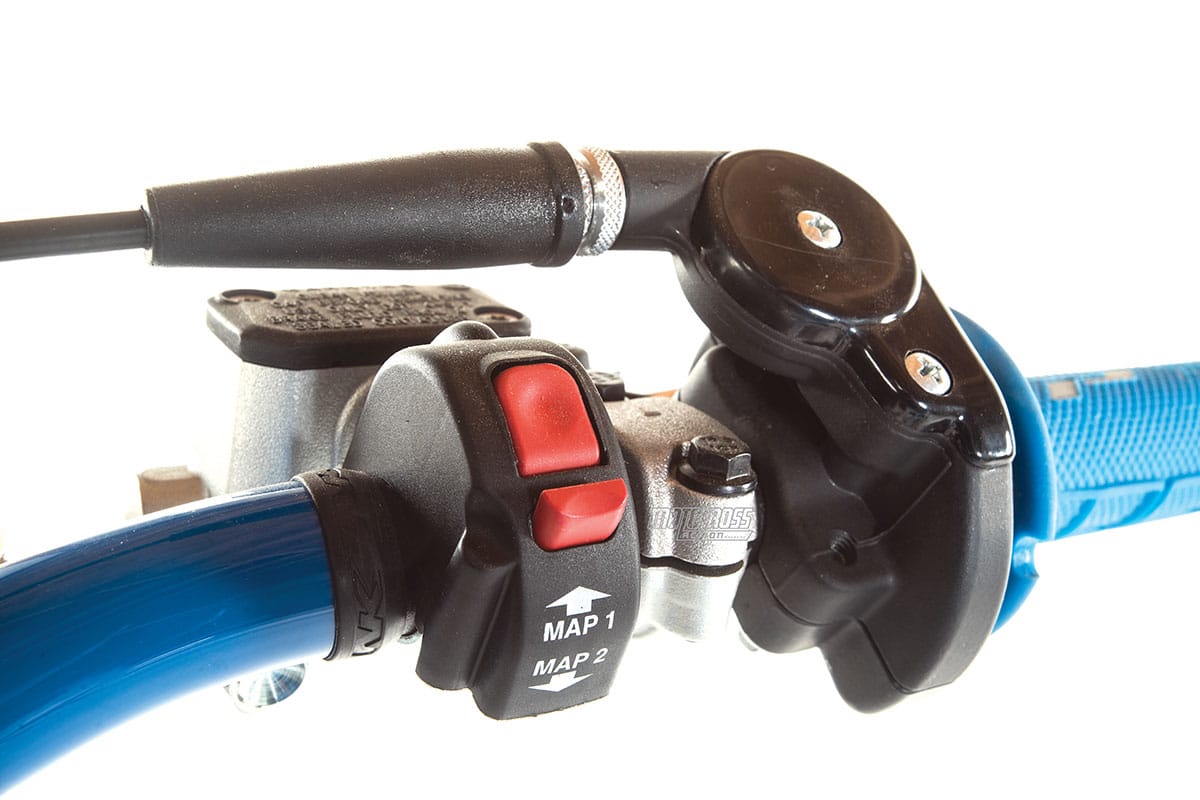 There are two maps, but they aren’t very different.

Q: HOW WELL DID THE MIX-AND-MATCH KAYABA FORKS AND TM SHOCK WORK?

A: Very well. We are happy to say that, because a few years ago TM had nightmare settings in its Kayaba SSS forks. Now TM has great forks, and the nightmare days are long gone. The 2020 forks were on the soft side for our Pro test riders. They went in on the compression for better hold up. As for the TM shock, nobody said a thing! All of the test riders liked the standard setting best—only the race sag was changed to accommodate different rider weights. Overall, the suspension setup worked well. We could see riders only changing a few clicks here and there to get a proper base setting. Ride the bike before you send the suspension to your favorite tuner. You might be surprised.

(2) Maps. The TM offers two maps to choose from via an easy-access handlebar toggle switch. Both maps were very similar.

(4) Jetting. We started tuning the carb with the air screw. Then we gave up on that and swapped out the pilot. When that didn’t satisfy us, we changed the needle. We made the final adjustments with the clip position. One caveat: we race in a mild Mediterranean climate with very low humidity and warm temperatures, so the best we can offer as far as jetting suggestions for your locale is a starting point.

(1) Brakes. The Brembo brakes with a 270mm Galfer Wave were fantastic. The rear might squeak here and there, but these brakes do the job better than anything else in the business.

(2) Wheels. We like the blue Takasago Excel rims with their polished spool hubs.

(5) Handling. This is a great-handling bike. It can turn on a dime and has excellent straight-line stability.

(6) Balance. After years of having to run super low sag and shorter shocks, the 2020 TM 144MX now offers a good balance at an average sag height.

(7) Tires. TM has recently switched from Dunlop to Bridgestone X20 tires; we liked them.

(8) Engine. This 144cc TM engine is built to race. It offers a powerband that racers want.

A: The TM 144MX reminds us of what factory 125cc machines were like back in the two-stroke heyday. This bike needs to be revved to the moon to get the most out of it. Skilled two-stroke riders will love this bike through and through; it is just about the complete package. It handles well and has good suspension. The engine can take a beating, and it has brakes and a clutch that hold up well. If you are a serious racer, love tiddlers and dare to be different, this bike is right up your alley. KAYABA SSS FORK SETTINGS
For hard-core racing, we ran this setup on the 2020 TM 144MX (stock clickers are in parentheses):
Spring rate: 0.40 kg/mm
Compression: 6 clicks out (9 clicks out)
Rebound: 12 clicks out
Fork height: Standard position
Notes: The forks were best for Novice riders. Faster riders went in on the compression so the KYB forks would ride higher in the stroke.

TM SHOCK SETTINGS
For hard-core racing, we ran this setup on the 2020 TM 144MX (stock clickers are in parentheses):
Spring rate: 4.2 kg/mm
Race sag: 105mm
Hi-compression: 12 turns out
Lo-compression: 16 clicks out
Rebound: 20 clicks out
Notes: No test riders complained about the shock. We only had to set the sag for the rider’s weight.

REM MOTOCROSS RETURNS TO ACTION THIS SATURDAY AT GLEN HELEN

ON THE RECORD: COMPLETE TEST OF THE PRO CIRCUIT-BUILT 2004 CR250