We get misty-eyed sometimes thinking about past bikes we loved, as well as ones that should remain forgotten. We take you on a trip down memory lane with bike tests that got filed away and disregarded in the MXA archives. We reminisce on a piece of moto history that has been resurrected. Here is our test of Michael Byrne’s 2003 Factory Connection Honda CR125.

The MXA wrecking crew’s stock and trade is testing motorcycles. Big, little, fast or slow, we spend the majority of our time putting in laps in pursuit of knowledge. Hopefully, what we learn helps local racers get a better understanding of what’s available and what they can do to improve what’s out there. And, every once in a while, we test bikes that are so special, so unique, so on or off that they offer a perspective into the world of the haves and have-nots. Factory bikes, the bikes of the stars, aren’t all that hard to come by‚ unless they are factory Hondas. Even though we’ve ridden Team Honda’s bikes many times (including Ricky Carmichael’s bike)‚ it is always under a rigid set of corporate directives. As a rule, Honda does not allow its race team bikes to be ridden in the midst of a series. The MXA wrecking crew has to wait to ride RC’s Supercross bike until the Supercross season is over, or his National bike until the Nationals are history. It’s Honda’s bike and Honda’s rule; we can live with it. 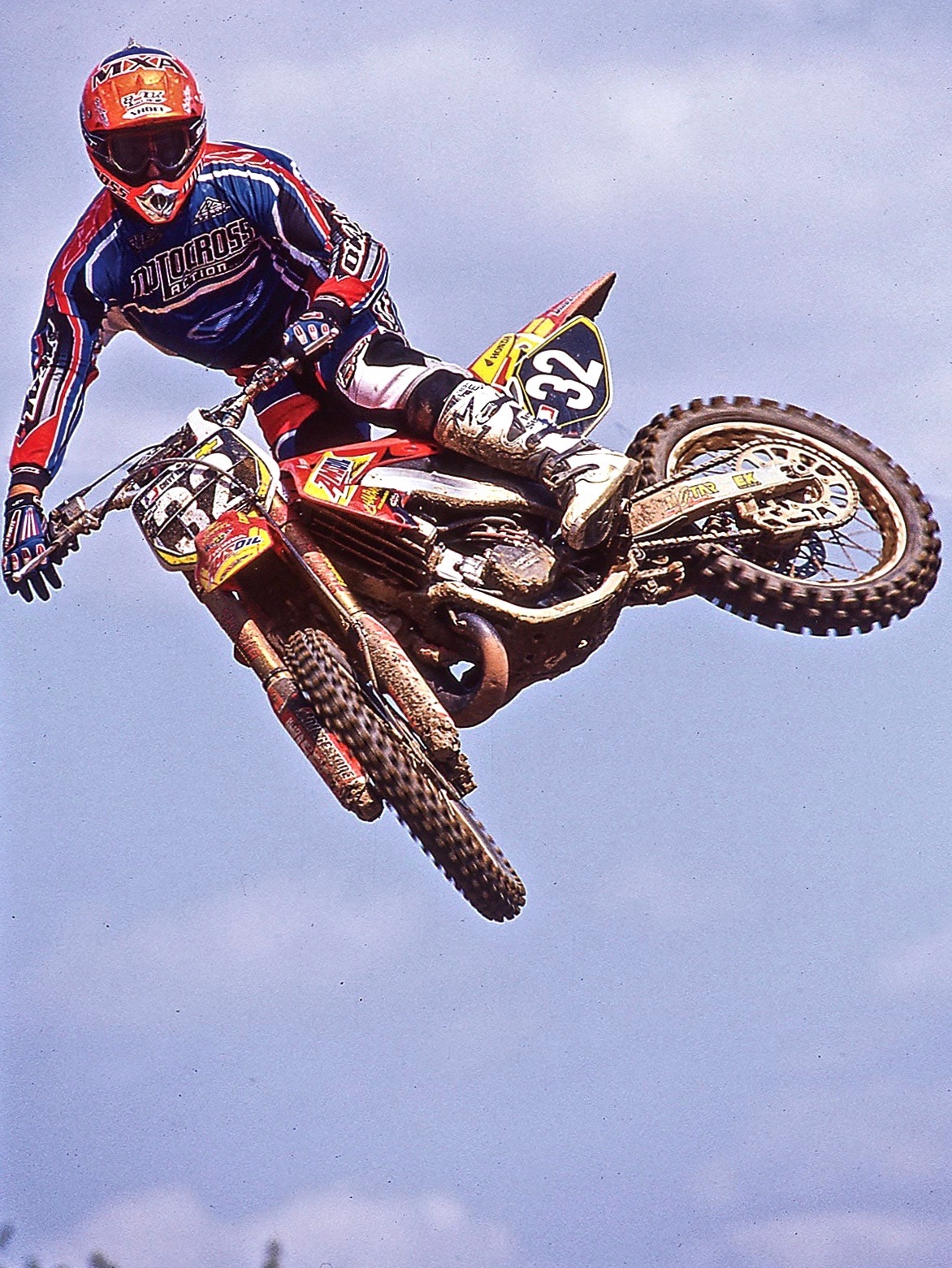 THE FUNNY THING IS…

The funny thing is that when we started tossing around the idea of testing one of Factory Connection’s CR125s, we didn’t even think about Honda’s corporate directive. As far as we were concerned, and we’re pretty sure the rest of the world agrees with us that the Team Factory Connection/Amzoil/Chaparral/O’Neal bikes are not Team Honda bikes. Wrong! Our assumption couldn’t have been further from the truth.

To be completely honest, it wasn’t our idea to test Factory Connection’s CR125. Factory Connection owner Rick Zielfielder has approached us year after year with the idea of testing one of his bikes. This year was no different. At this year’s Glen Helen National, he said that he had a perfect plan to get us on one of his bikes. It was an offer we couldn’t refuse. Rick, Ziggy to the motocross community, would rent the MX338 track just days before the Southwick National so that we could ride on it. We had our choice of Ryan Mills’, Chris Gosselaar’s or Michael Byrne’s Honda CR125. We chose Byrne’s bike, a lucky happenstance since four days later he used the exact bike we tested to win his first-ever AMA 125 National moto. Everything was set. We would race at Glen Helen the weekend before and then catch a flight to Southwick on Monday morning.

ALL WAS NOT SET

Remember Honda’s directive? It turned out that it applied to Factory Connection’s CR125 as well as Ricky’s CR250. Honda didn’t want anyone, besides Byrne, riding the bike until after the 125 Nationals were over.

Ziggy was in as much disbelief as we were. He had wanted us to test his bikes for years, and finally we had worked out the details. But now we were derailed by the Honda edict. Ziggy pleaded his case to Team Honda, explaining that he had sponsors who would benefit from the exposure—and that exposure was the reason they sponsored the team in the first place. Honda stuck to its guns.

With a never-say-die attitude, we called Honda team manager Erik Kehoe, and the conversation went something like this: “Erik, buddy, old pal, we’ve already set aside the space in the magazine. The airline tickets have been bought. We’ve booked the hotel, and we’ve been brushing up on our sand technique at the local track that we used to ride with you at during the long, hot summer weekdays. Can you make this happen?”

Kehoe’s answer was short and swift: “We’’ll make it happen.” With that, we packed our bags.

WHAT IS FACTORY CONNECTION?

Jump forward to 1998. Mike LaRocco had opted out of his Team Suzuki contract and signed an unusual deal with Team Honda. Officially, Mike had a factory ride (with all the works parts that come with it), but he didn’t have to pit out of the Honda semi. Mike’s deal was similar to Jeremy McGrath’s 1997 Team Suzuki deal and SuperMac’s subsequent Team Yamaha contracts. That is where Factory Connection entered the picture. They became Mike LaRocco’s home away from home, operating out of an odd motorhome/trailer concoction. Honda, LaRocco and Factory Connection were pleased with the results. The success of the collaboration led to Factory Connection getting more funding and its own 125 team. It has grown. How much? In 2003 alone, Factory Connection had three separate entities under its banner. Mike LaRocco on his works CR250, Kevin Windham on his CRF450 and the CR125 team.

TURNING A PIG’S EAR INTO A SILK PURSE

We’ll make no bones about it; we wanted to test Michael Byrne’s CR125 because it, along with the rest of the Factory Connection CR125s, is the only fast CR125 on the track. In stock trim, the CR125 is less than powerful. And, even more significant, most hop-up shops are at a loss as to how to make the CR125 any faster. Factory Connection’s CR125s are different. They are fast—very fast. Even a casual observer can tell that Factory Connection’s bikes hold their own against everyone else’s factory offerings. During the Supercross season, it was amazing to see what 190-pound Travis Preston was able to do on his CR125.

The bike didn’t get this way without months of hard work and considerable help from Honda. What Team Honda technicians Andrew Hopson and Dan Bentley have done is nothing short of a miracle. Even a glance at the engine reveals that it has undergone a serious makeover.

TAKE A CLOSE LOOK AT THE ENGINE

Look closely at Michael Byrne’s engine and the first thing you’ll notice is the plate under the cylinder. No, they aren’t cheating. This isn’t a big-bore. The plate under the cylinder allows Factory Connection to run a longer connecting rod (and no, a longer rod does not change the stroke). The second most noticeable difference is the dimensions of the exhaust pipe. “Humongous” doesn’t do it justice. If you stare for a while, you’ll spot the lack of a choke, oversized radiators, works ignitions, special shifters and factory footpegs.

And, most important of all, the works Showa suspension stands out. Loyal CR125 owners will note that the production CR125 comes with Kayaba components, but Factory Connection and Team Honda both have close ties with Showa.

WHAT DO WE THINK OF THE POWERBAND?

We’ve ridden fast KTM 125SXs, Yamaha YZ125s and YZ250Fs and Kawasaki KX125s, but what we hadn’t ridden in the last decade was a fast CR125. We have now. Wow! We knew Byrne’s bike would be fast, but fast is a relative term.

Byrne’s CR125 engine has about as much in common with a stock CR125 engine as your Toyota Tundra has in common with Toyota’s Indy 500 cars. Peak horsepower numbers are up there, but what is more important in our book is the powerband. Whereas the stock bike has a short, abrupt powerband, Byrne’s bike has a little bottom (you don’t ride a National bike down low), tons of middle (this is where the magic happens) and beaucoup top end (this used to be the bread and butter of the Hondas of the olden days and is once again with Byrne’s engine).

To keep the engine in the meat of the power, you need to tap the clutch out of every corner (the Southwick sand added to the clutch needs). Clutching it allows the midrange to do all the work. At this point, the MXA test riders would let it rev until we could hear the engine cry. Then it was slam-bam-do-it-again (with the added bonus of a huge smile on our faces).

If you are curious about the suspension, you shouldn’t be. If we owned a Honda, we’d send the suspension to Factory Connection. We’ve never gotten a bad set of CR forks from the New Hampshire shop. Ziggy knows suspension. We used all the travel in both the front and rear of Byrne’s bike, which in our book is a good thing. Some factory riders set their bikes up with overly stiff suspension, giving up some travel for a Supercross-style feel. Luckily for us, Michael Byrne isn’t one of those guys. His bike was unbelievably balanced. The forks didn’t dive excessively going into corners, and the rear suspension didn’t blow through its stroke.

The only downside of hammering Factory Connection’s CR125 around Southwick for a couple of days was that we had to come home to our stock CR125. We do have one hope, though. Since Byrne won his first-ever 125 National moto right after we thrashed his bike, he might be superstitious enough to want us to ride his bike before every National.

WHO DOES THE ENGINE?

Factory Connection runs Pro Circuit pipes and silencers, but Honda definitely does the engines. Without a doubt, there is not a single engine on the National circuit that has more work done to it than Factory Connection’s CR125. Andrew Hopson and Dan Bentley have only one job at Honda, making the Factory Connection CR125s fast. It is no small task. They just might be the hardest working men in the sport. They start with a 2003 engine and a 2002 cylinder and head. After that, everything is left up to their imagination. They leave no stone unturned. The duo tries everything on the dyno first and then out at the track. One of the more interesting things they tried on Byrne’s CR125 was an electronic power valve. Byrne ran the electronic power valve system in the 125 East but switched back to the standard mechanical power valve for the Nationals.

Byrne’s bike had the perfect setup for us. The Australian weighs 170 pounds, while teammates Ryan Mills and Chris Gosselaar weigh 170 pounds combined. Michael has his bars in a very neutral position (almost parallel with the forks) and runs his levers almost straight out when you are sitting on the bike.

How did it run? Like no CR125 you can imagine. We only wish Honda could build a 125 like this so that the rest of the public could buy it. This is the way the CR125 is meant to be.

Unfortunately, as of late, Honda hasn’t been able to. And, the hop-up shops have been unable to turn the CR125 into something worth racing. So, all we’re left with is two days of riding Southwick on what just may have been the best CR125 ever built.

FIRST RIDE ON THE 2020 YAMAHA YZ125 TWO-STROKE: A TIMELESS WORK OF ART