We get misty-eyed sometimes thinking about past bikes we loved, as well as ones that should remain forgotten. We take you on a trip down memory lane with bike tests that got filed away and disregarded in the MXA archives. We reminisce on a piece of moto history that has been resurrected. Here is our test of the Suzuki RM-Z450 that Ken Roczen raced to the 2016 AMA 450 National Championship and we raced it right after the Ken was done with it. This is no normal factory machine. Roczen’s smooth Euro style allows him to run soft suspension with an engine that is easy to ride. It reminded us of a Vet rider’s bike setup.

Championships don’t sell motorcycles. The old adage “Win on Sunday; sell on Monday” is a fairy tale. The Suzuki RM-Z450 has won AMA outdoor National titles in 2009, 2010 and 2016. In those years riders as admired as Ricky Carmichael, Chad Reed, Ryan Dungey and now Ken Roczen have ridden the yellow machine to victory in the great outdoors. However, when it comes to selling units in the dealerships, Suzuki is the low man on the totem poll. Why? Well, if you took each of those championship-winning bikes over that time span and took the graphics off, the untrained eye wouldn’t be able to tell them apart. It is no secret that the RM-Z450 has remained relatively unchanged since 2008 in comparison to the competition. Does that make the RM-Z450 a bad bike? Absolutely not. The results don’t lie. Ken Roczen’s championship-winning bike may not be the exact same bike that rolls off the showroom floors, but it has the same meat and potatoes per the AMA rule book. Don’t believe us? The RCH Suzuki team let the MXA wrecking crew not just ride Kenny’s bike, but race it too. The only caveat was we had to fly to Mt. Pleasant, Michigan, for the “Edge of Summer” event at the Soaring Eagle Resort. Why did we have to go to Michigan? Because the team’s semi and the bike never came back from the last AMA National. The “Edge of Summer” event is in its third year, and it draws tons of Pros and Amateurs for the $62,000 in cash and prizes. We were happy to be a part of it.

Ken Roczen learned to be an efficient rider in Europe. The MXGP tracks he grew up on are much rougher and are ill maintained compared to the AMA National tracks. This taught Ken to carry his momentum on the track, with his agile right hand to meter the throttle. With a style that separates him from his American counterparts, Kenny has used this European grace to his advantage, and with his unique style of riding comes an unconventional bike setup—a setup that gives him an edge over the competition. RCH team manager Kyle Bentley is an open book. He guided the MXA wrecking crew behind the Iron Curtain. Talking about what led to RCH’s success with Kenny this year, he mentioned how important the relationship between the rider and team is and that it takes time to develop. With this being Ken’s second year with RCH, they started meshing well enough to learn what Kenny wanted in a bike.

“Kenny has a great feel for the motorcycle. I just think sometimes it was difficult to translate that into what he wanted,” Kyle stated. It was after the Santa Clara Supercross when they had a few weeks break to test for outdoors that they experienced the breakthrough that led to the AMA crown. Knowing the bike was down on power and wanting to get up front on starts, they went back to the drawing board to give Kenny more bottom-to-mid power. Other than the engine, the three big changes were going back to the stock triple clamps, the stock motor mounts and choosing a different rising-rate linkage. These three relatively minor modifications turned things around—first in Supercross and then in the Nationals. When the outdoor season came around, the team was locked and loaded. Only a few minor changes were made to the bike going into the AMA National series. With Kenny’s ability to carry exceptional momentum around the track, he’s able to stay in the low-to-mid part of the powerband most of the time. In fact, the GET data-acquisition device on his bike informed the team he was only wide open about 2 percent of the time.

Kyle said, “Comparing Ricky Carmichael or Broc Tickle to Kenny on how much they ride wide open, it was a lot different.” Kenny’s smooth style is easy on the bike. There’s no need to abuse the clutch or rev the engine to the moon. Heck, he even saves on fuel consumption. The only thing that Kenny is hard on is the rear brake, as he sets it super high and tends to guide the rear end by dragging the brake. Kenny likes the brunt of his power delivery from bottom to mid. He rides wide open only about 2 percent of the time.

When we mentioned the 240-pound weight of a stock RM-Z450 to Kyle Bentley, he said that lightening the bike sometimes upsets the chassis, and with the new technology, they actually have to detune the engine (for the full-race spec). Thus, they never worried about weight that much. Their focus was on feel. Suffice it to say that Ken’s bike doesn’t weigh 240 pounds like the stock RM-Z450, but it isn’t the lightest bike on the track (regardless of how much unobtainium they throw at it). We were surprised how heavy it felt taking it on and off the stand.

When we rode Ken’s bike, we left it as is. We made no lever or bar position changes. We wanted to give you the inside scoop on what it was like to ride Kenny’s championship-winning bike with his exact setup. If you have read any of our previous tests on 450 factory bikes, you know that these bikes are usually not much fun to ride. They tend to have rock-hard suspension and a chassis setup that wants to put our faces in the dirt. Not Kenny’s. His effortless riding style and the way he weights the rear of the bike allow him to run a soft fork setup. We were shocked by how plush the initial part of the stroke was. Instead of the forks deflecting off bumps, they tracked over the ground, soaking up the small chatter. Once the forks hit the mid-stroke, the stiffness ramped up fast, although our testers who weren’t much heavier than Ken did manage to bottom out his forks. As for the shock, the rear end had an extremely loose feel. Most AMA Professionals prefer a dead sensation in the rear. Kenny’s shock setup was almost like having a blown-out shock; it moved around that much in the rear. RCH admits that they fought Kenny over this shock setup for more than a year because they felt it was the opposite of what it should be. Over time, however, they learned that the way Kenny rode the bike made what was wrong in their eyes right in his. Riders have vastly different needs. Kyle was positive that Ricky Carmichael, who loved the dead rear-end feel, would hate Ken’s bike setup and vice versa. Isn’t there supposed to be a sight glass there? To ensure the rear master cylinder keeps intact, the sight glass is removed.

As for the engine, we instantly noticed the difference in transmission ratios. Both second and third gear were much taller than the stock gearing. Our testers never really got close to fourth gear. This made the bike easy to ride, because the amount of shifting required was reduced significantly. The powerband hit hard down low, but rounded off after you hit the midrange. The surge off the bottom could lead to a loop-out off the line if you weren’t ready for it. Kenny has launch control mounted on his bars, although we never saw him touch the button before the gate dropped. The power was explosive when you needed it, but it purred like a kitten when our testers tamed their right hands. 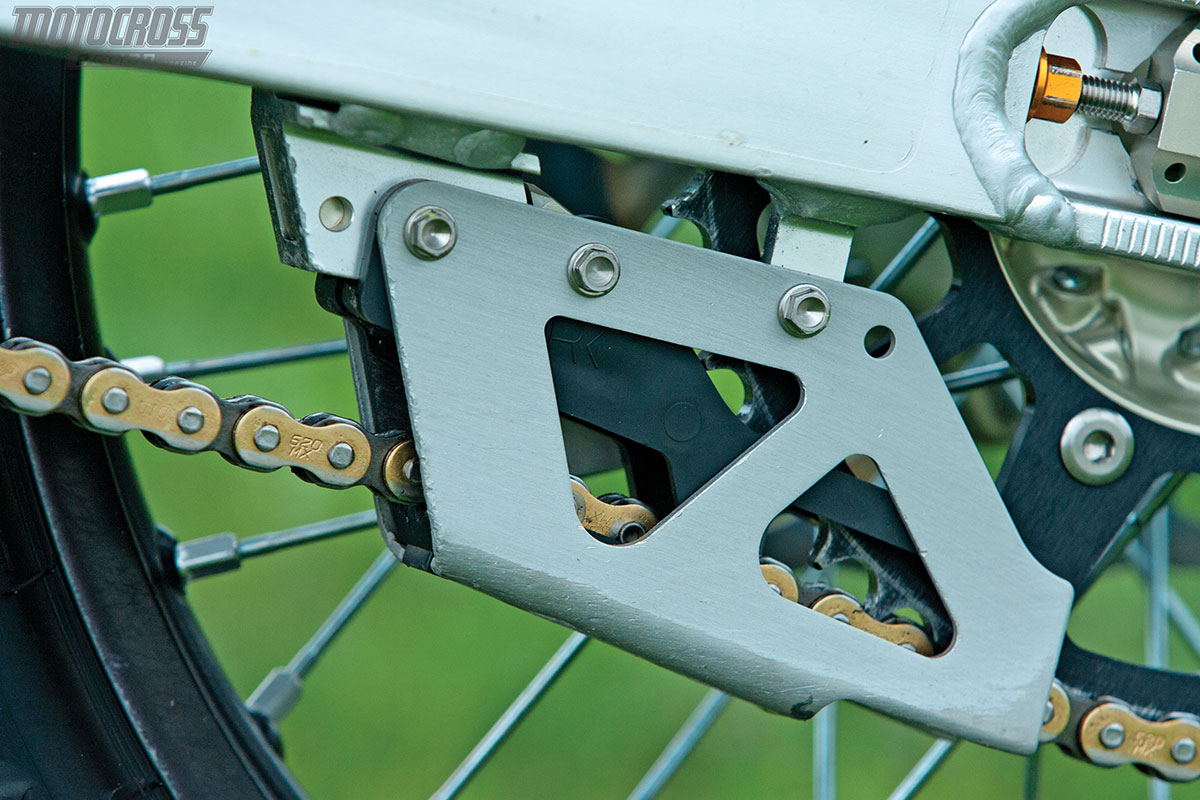 The chain guide is extended rearward, as Kenny likes his rear wheel to be back in the axle blocks. This increases stability.

The chassis had a lower center of gravity when compared to the OEM model. The low feeling allowed the MXA test riders to carve through corners like they were on rails. At speed, a stock RM-Z450 has a tendency to shake its head. Not Kenny’s steed. Down fast sand whoops, we could relax our grip as the rear end tracked straight as an arrow. Kyle told us the improved stability came from running the rear wheel as far back as possible in the axle blocks. They even moved the chain guide rearward to prevent the chain from derailing. The MXA wrecking crew was shocked with how soft Ken likes his suspension. They were like riding on pillows.

The 3027 Nissin caliper and 280mm front rotor had a firm feel that, surprisingly, wasn’t overpowering. The rear brake was fed through a super-thin braided-steel hydraulic line. The compact hydraulics resulted in the rear brake having zero free play and an extremely touchy feel. It was very hard to meter, especially in choppy braking bumps. It was more of an on/off sensation. While Kyle was going over the brake details, we noticed the team doesn’t run the stronger Excel A60 rims but instead runs the Excel Takasago rims that come standard. It turns out RCH believes the softer rims offer more give to the suspension and chassis. That is something that only a racer who spends hours in the saddle could feel. The team has to replace the wheels more often, but Ken Roczen, as well as the rest of the RCH team, doesn’t like the rigid feel of the A60 rims. 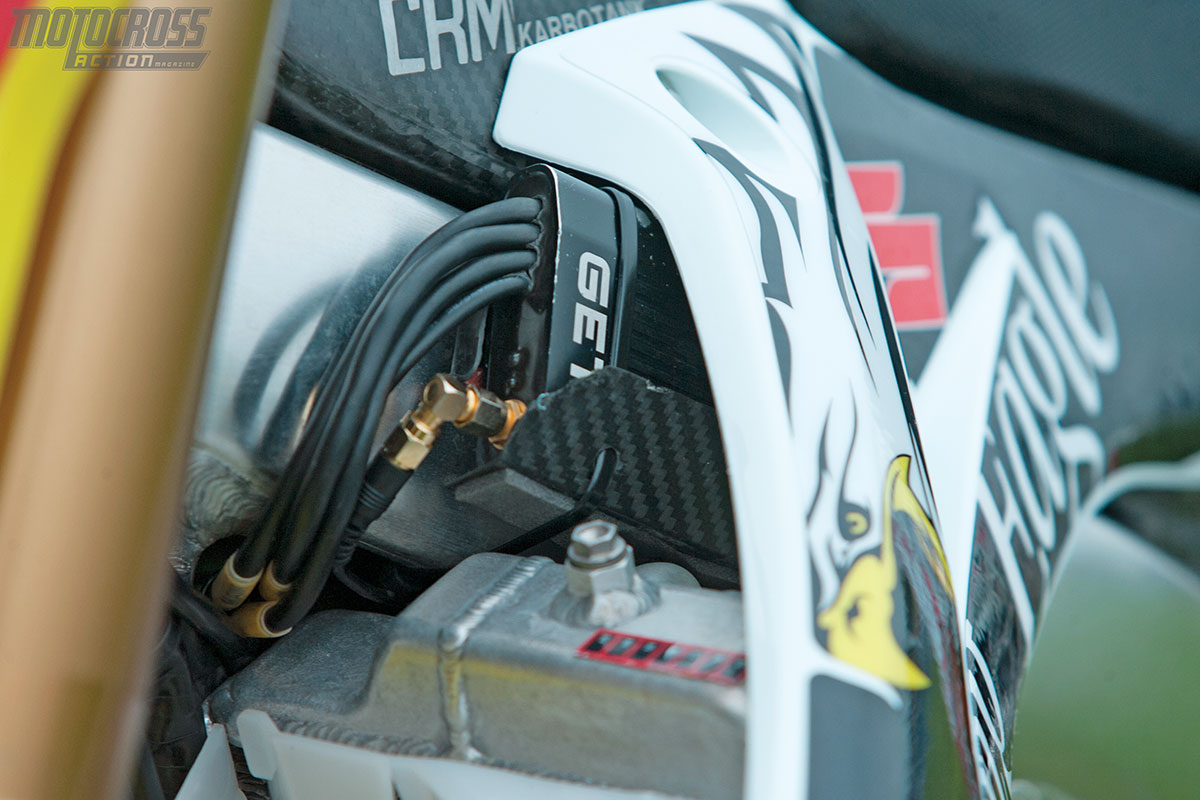 RCH puts sensors all over the bike to record data with the GET data acquistion software.

It was an awesome experience to ride the 2016 AMA 450 National Champion’s bike. MXA would like to thank the whole RCH team, the Soaring Eagle Resort and Suzuki for their hospitality. We enjoyed seeing the team put in the hard work that it takes to build a winning effort. The bike they developed for Kenny is a work of art on the track. We especially appreciated that it was one of the few factory bikes that mere mortals could swing a leg over and still enjoy the ride. Kudos to the RCH team

EVERY AMA SUPERCROSS CHAMPION EVER: THERE ARE ONLY 24 OF THEM