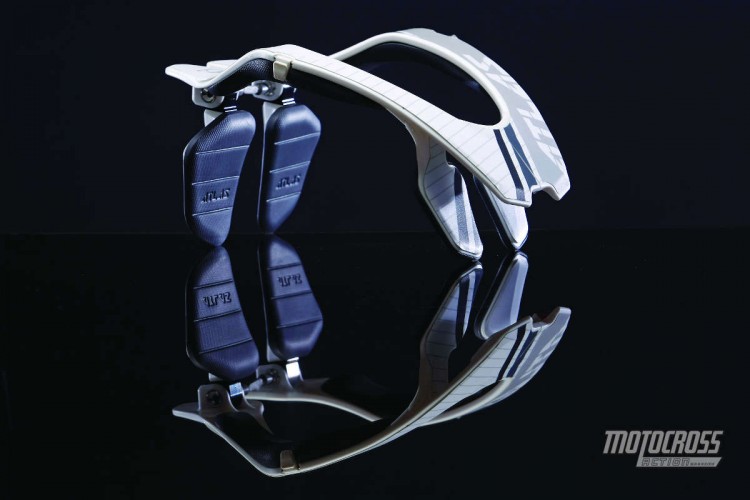 WHAT IS IT? Used by Ryan Villopoto, Dean Wilson and Jason Anderson, the Atlas Air neck brace is a completely new design. It incorporates many of Atlas’ proprietary ideas but has several major updates.

WHAT STANDS OUT? Here’s a list of things that stand out with the Atlas Air neck brace.

(1) Design. The brainchild of former professional racer Brady Sheren, Atlas’ unique neck brace was unveiled in 2012. It incorporated a split-frame design that kept the brace off the rider’s spine, whereas Leatt and Alpinestars used a thoracic support that sat on the spine. Sheren believes that the energy load caused by force should be directed away from the spinal column. The same structural design philosophy was used at the front of the brace; instead of transferring weight to the sternum, the Atlas brace uses two “feet” that act independently. The new Atlas Air neck brace follows these same principles yet has these revisions:

(a) At 1.3 pounds, it is very light.
(b) The front suspension has three times more travel than the previous model.
(c) A redesigned easy-open latch system has fewer parts and is foolproof.
(d) Billed as “Smart Mounts,” the back supports have a reversible design and three angle adjustments for a customized fit.
(e) Gone is the heavy rubber padding, replaced by lightweight, colored foam that comes from the running-shoe industry. MXA initially encountered issues with bonding of the foam to the frame, but Atlas assured us that the problem would be solved in production.

(2) Fitting. There are two ways to put on the Atlas Air brace. You can slip the brace over your head (unless your head is as big as a watermelon) or use the latch at the front of the brace. Atlas includes optional padding that can allow the brace to sit higher or lower. Riders with longer necks preferred running the taller padding. Atlas sells the Air brace in three adult sizes: small, medium and large. To determine the correct size, we recommend visiting the Atlas website for proper instructions. As for customizing the fit, the rear mounts can be adjusted to steepen or slacken the angle of the back supports. Most testers preferred to tuck the Air brace into their chest protectors, but it wasn’t always a snug fit. Atlas also includes a strap kit.

(3) Comfort. Testers liked that the back of the Air brace sat low, because it was less obtrusive when climbing hills or going through whoops. The brace platform didn’t interfere with side-to-side head movement. In terms of overall weight, the Air brace is appropriately named. It’s very light. We liked the foam padding, because it provided cushion, could be cleaned easily and didn’t absorb water.

(4) Protection. It is our belief that neck braces can limit catastrophic neck injuries. We like Atlas’ approach to neck protection, because the split design keeps pressure off the spine and sternum. Wearing a neck brace isn’t supposed to feel any more natural than wearing a helmet. The intent is to protect the spine and disperse energy across a wide area rather than directing it to a certain point at impact. We do wish that the Air brace had a wider platform, as it’s possible for a large helmet to extend beyond the edge of the brace. Plus, there is always the caveat that the lower a brace sits, the farther it is away from the rider’s helmet—and the helmet/brace connection is what redirects the load path away from the rider’s neck.

WHAT’S THE SQUAWK? We have two quibbles: (1) Due to the two wings on the rear, it’s challenging to properly fit the Air brace under some chest protectors. (2) We wish that the brace had a wider platform.